The Rhine, Koblenz and the Legend of Lorelei 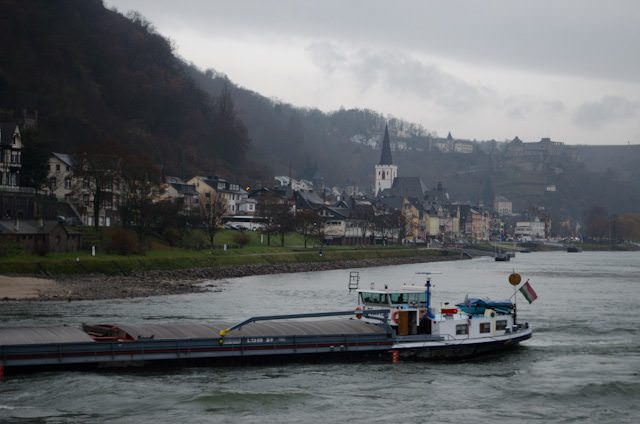 Our morning sail to Koblenz offered some of the most scenic cruising along the Rhine this trip. Photo © 2013 Aaron Saunders

Guests aboard Viking Rivers’ Viking Baldur awoke to a relaxing morning of scenic cruising as we made our way along the Rhine to the German city of Koblenz.

While many guests took the opportunity to sleep in, I rose at my normal time of 6:20am to shower, dress, and begin my day with another stellar breakfast in The Restaurant. The atmosphere was much quieter and less competitive this morning, as only a handful of guests were there by the time I strolled in at quarter past seven. 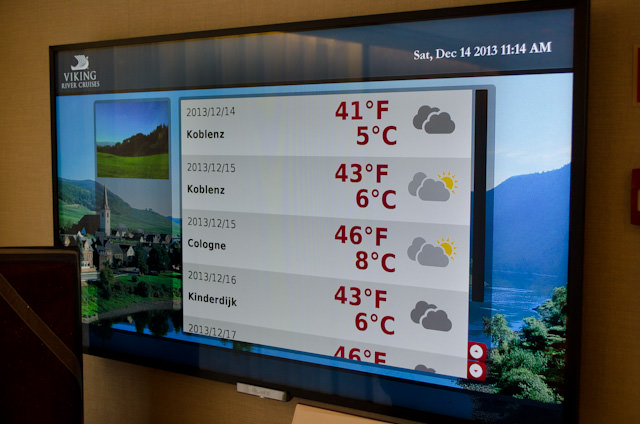 Located just outside the Restaurant, a large video display lists the temperatures guests can expect from the next few days. Very handy! Photo © 2013 Aaron Saunders,

The reason I wanted to get up so early was that Program Director Anita Jaric had informed us that this would be the most spectacular stretch of the Rhine we would sail on our voyage – and she was right. Up until our arrival in Koblenz at Noon, we passed town after town, and castle after castle.

If you’ve never sailed the Rhine before, this is the reason you should do so. After three Danube river cruises chocked full of spectacular scenery, this stretch of the Rhine is arguably even more spectacular than the best the Danube has to offer. And should you tire of castles and ornate cathedrals, the Rhine has a spectacular stretch of water in store for you – and it will take your breath away. 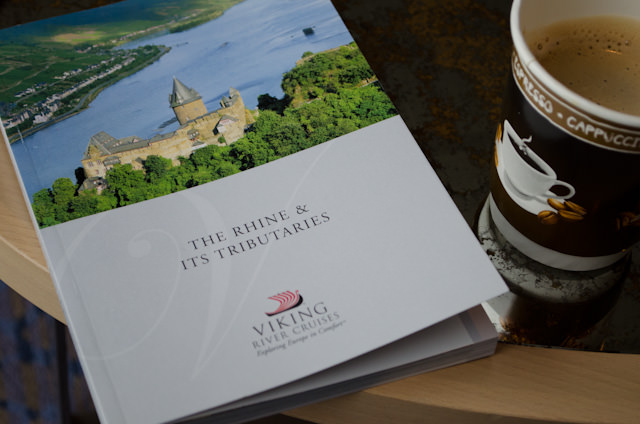 Keep track of your journey with Viking’s handy guide to the Rhine! Photo © 2013 Aaron Saunders 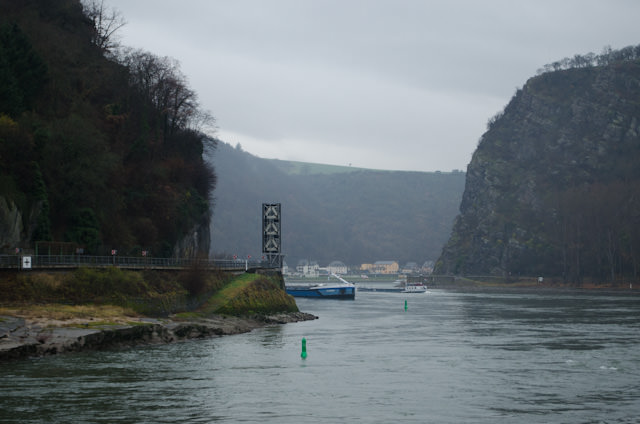 The serpentine stretch of water where the legendary Lorelei resides. The cliff face can be seen on the right. Photo © 2013 Aaron Saunders

At kilometre 554.2 along the Rhine is the Lorelei, a 433-foot high rock formation situated in a treacherous S-bend of the river. Up until recently, underwater rock formations turned this 80-foot-deep stretch of water into a turbulent mess that was responsible for sinking numerous ships throughout the history of the river. 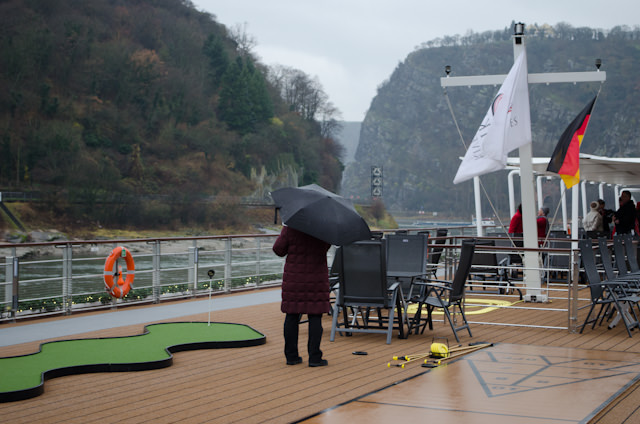 Guests braved cool temperatures and rain to take in this amazing feat of navigation from the upper Sun Deck aboard Viking Baldur. Photo © 2013 Aaron Saunders

Of course, an enduring legend has persisted about the Lorelei. At first, I thought this would be the usual fairy tale, somehow rooted some Shakespearean tragedy. Boy meets girl. Boy likes girl. Boy and girl are pulled apart. Someone throws themselves off the cliff where they met. Cliff is named Lorelei.

Unfortunately, that’s not how the story goes. It’s actually quite a sinister tale: there was once a maiden named Lorelei (obviously), and her siren song attracted numerous fisherman, who became so mesmerized by her alluring beauty that their ships ran aground on the rocks and they were never seen again. 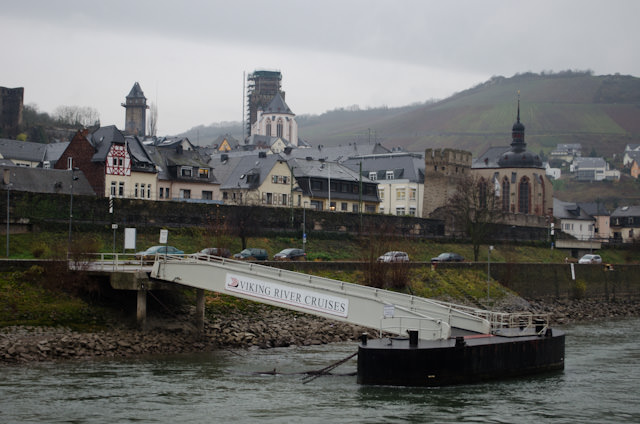 Numerous towns and castles were also part of our morning of scenic cruising. The town of Oberwesel, at kilometre 550, is pictured here. Photo © 2013 Aaron Saunders

Enter the young Prince Palatine. He had what polite society at the time referred to as “passionate yearnings” for Lorelei, but of course he met the same fate as the hapless fishermen. To avenge his son’s death (as was the style at the time), the good Duke Palatine climbed to the top of the summit of the cliff to kill Lorelei. She threw her necklace in the waters below, which rose up and carried her away, never to be seen again. But she continued to do her gruesome work, slaying wayward sailors who dared cross her path.

Apparently, Lorelei is no match for the Vikings, because we sailed through this narrow stretch of the Rhine without issue. But as far as navigation is concerned, there’s a certain ‘pucker factor’ to commanding a Viking Longship around some of these bends, with oncoming vessel traffic passing you on the port side. Helm commands were literally given to swing the stern the opposite way as the bow cleared the next bend, despite the fact the stern was still rounding the corner. This serpentine movement is all part of the safe navigation of these waters. 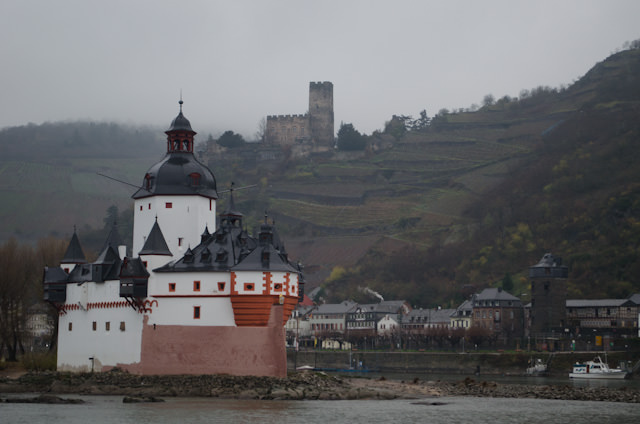 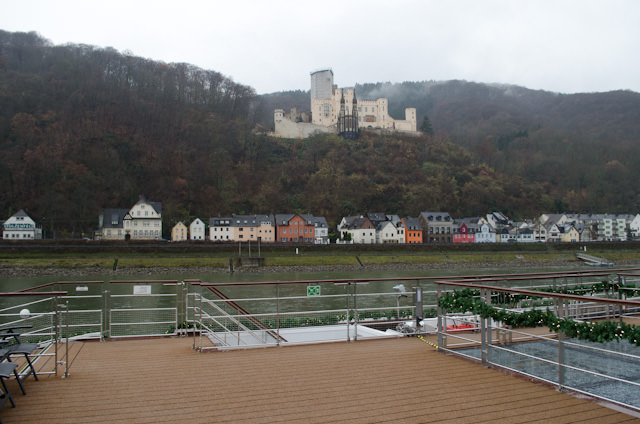 In total, it took just a dozen or so minutes to transit this entire Lorelei stretch of the Rhine, but it’s the most intricate piece of navigation work I’ve seen on any river, including the Danube, the Main, and the Mekong.

Just before noon, Viking Baldur arrived at our Viking-branded berth in Koblenz, Germany. I’ve noticed that docks at all of our ports of call here along the Rhine seem to be company-owned docks designed for Viking’s exclusive use; each has sported large logo/typeface banners identifying them as such. It’s a nice touch – and a sign the line is investing in infrastructure ashore at the same time. 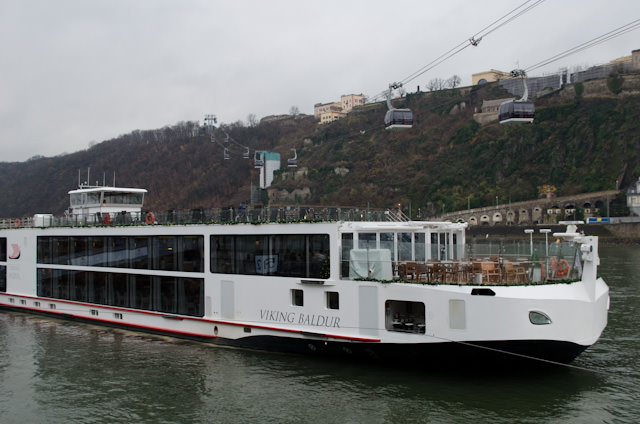 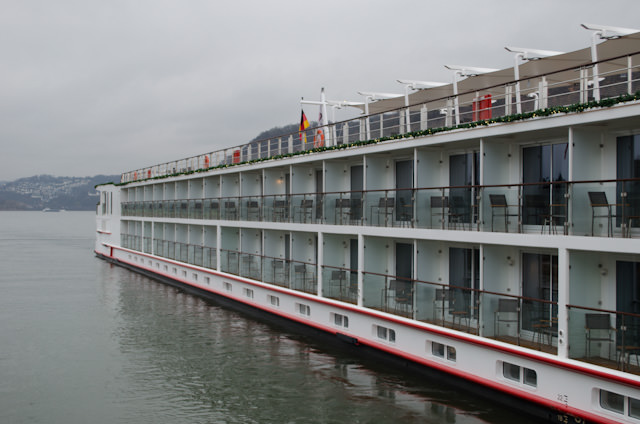 Don’t underestimate booking one of Viking’s staterooms featuring a full, step-out balcony; I’ve used mine more than I would have expected on this wintery journey! Photo © 2013 Aaron Saunders

This afternoon, guests were given the option of taking a complimentary four-hour tour of Marksburg Castle, or enjoying free time in the Christmas Markets of Koblenz. Naturally, I chose the latter. It’s not that I didn’t want to see Marksburg Castle – far from it. But it’s December, and my primary reason for river cruising through this stunning region at this time of year is to experience the diverse festivity of the Christmas Markets. 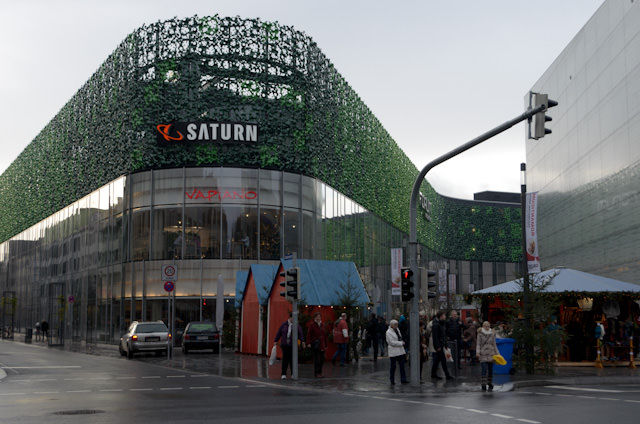 From the Viking berth, the town center of Koblenz can be reached with an easy 15-minuite stroll along the waterfront and a single right-hand turn. From there, you can’t help but to run into the main pedestrian shopping zone in Koblenz, and one of the city’s four distinct Christmas Markets.

Having the markets situated near the shopping district had a dual-effect: I was able to browse the markets and indulge in a few of my favorite European retail stores at the same time, stopping in Peek & Cloppenburg and the C&A Department store. Being a Saturday afternoon, the Koblenz shopping district was packed. 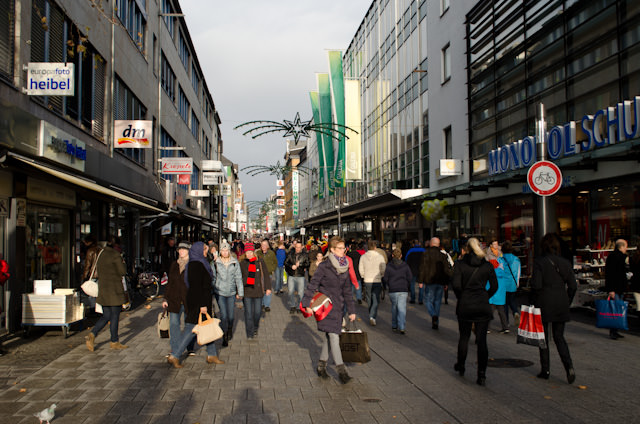 I can’t say that the Christmas Markets here were terribly unique or distinct, but they were enjoyable. If they have a downside, it’s that they were largely identical to the ones I experienced yesterday in Heidelberg. That’s what happens as these Christmas Markets voyages sail on: you become hypercritical of the wares on offer. 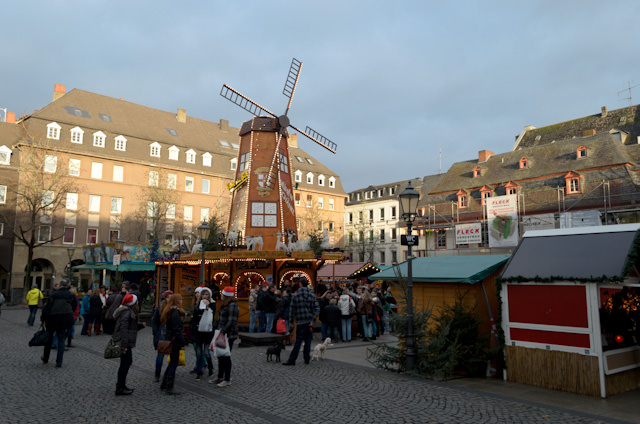 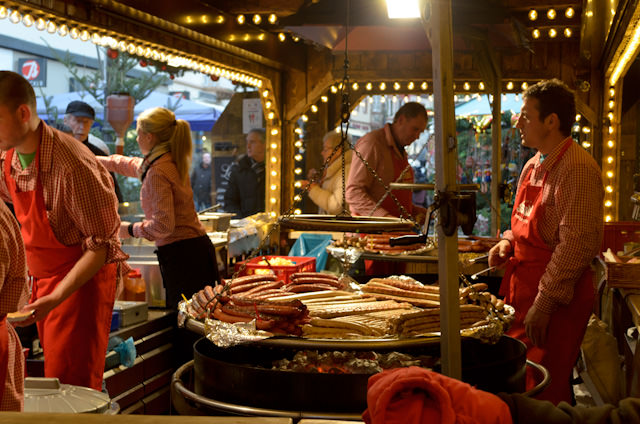 Sausages of all types on offer at one of four Christmas Markets in Koblenz, Germany. Photo © 2013 Aaron Saunders 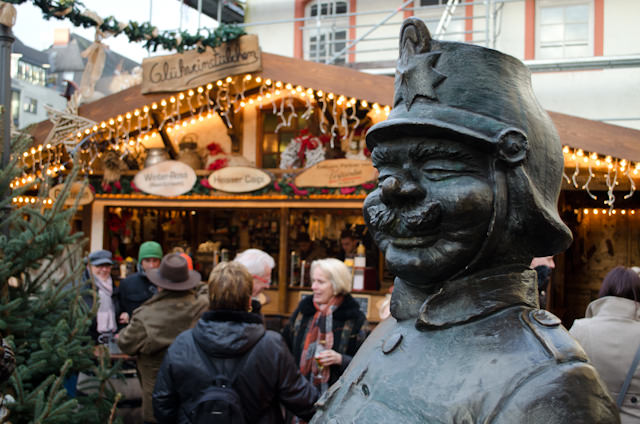 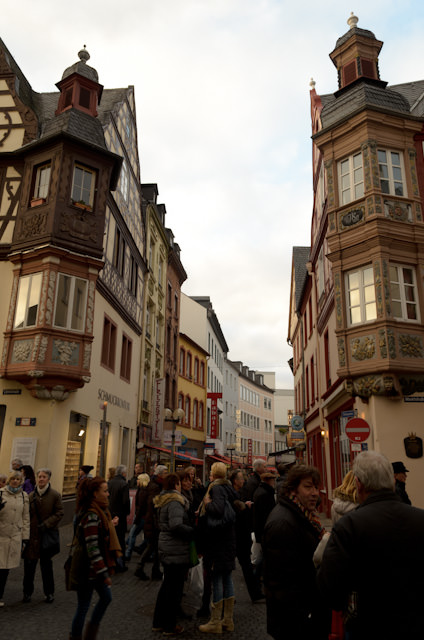 Still, I managed to buy a few handcrafted things this afternoon that I had not seen before, so it was a success. And – of course – the Gluhwein Rot was fantastic as always. You can also get Gluhwein Weiss, or Gluhwein made of white wine. You can add any variety of shots to this that range from Red Bull to Rum, but I don’t know why you’d want to – it’s stellar on its own. 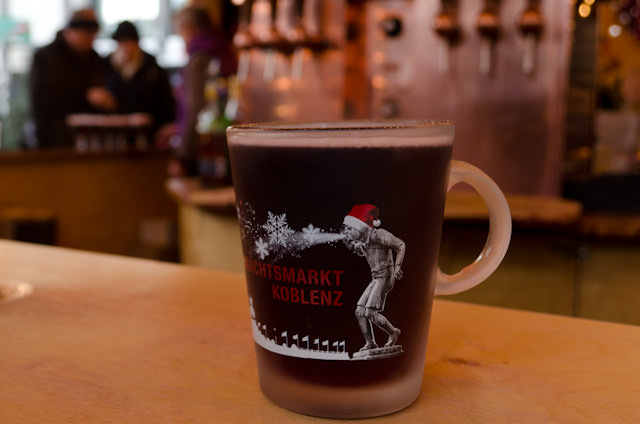 Another cup of ‘Gluhwein Rot’? Why not! Photo © 2013 Aaron Saunders 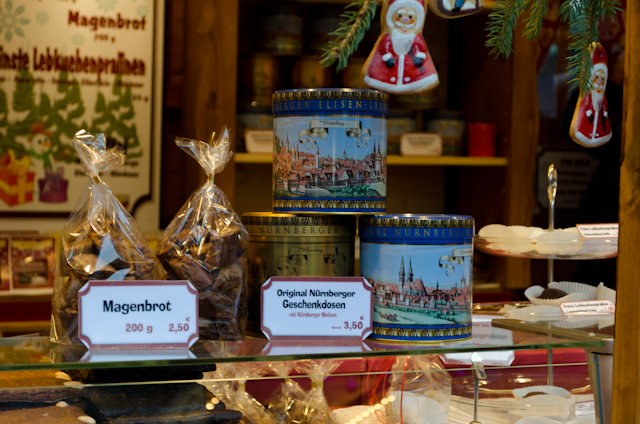 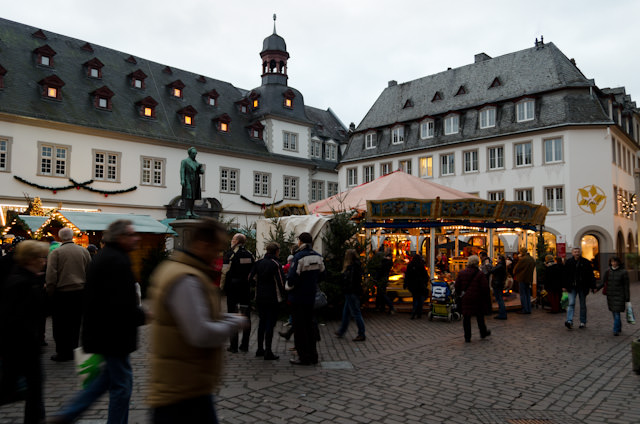 Following another satisfying dinner tonigh, the wonderful crew of the Viking Baldur sang Christmas carols for their guests in the Viking Lounge, and it’s no stretch to say there wasn’t a single free seat in the house. It’s more remarkable when you consider that, for most of the crew, English is a second language. I doubt I could sing a Christmas carol in German, or French, or Hungarian, or Romanian – but they did, and like everything here onboard, they make it look effortless. 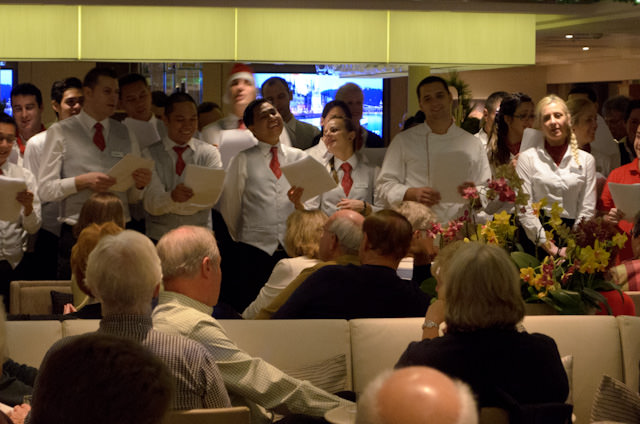 The crew of the Viking Baldur sing Christmas carols for guests on December 14, 2013. Photo © 2013 Aaron Saunders

Of course, I hung back out of the way in the Aquavit Lounge and did what I normally do: photograph other people having fun. But it gave me a good overview of the other 185 guests onboard Viking Baldur. This has been an interesting voyage, because my first impression of the first few days was that the passenger base here onboard wasn’t really gelling too well.

But now it is a different story. Tonight, the Lounge isn’t filled with passengers, or guests. It’s filled with friends. 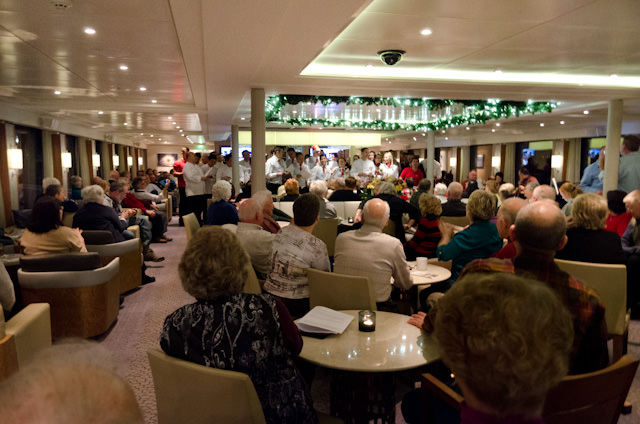