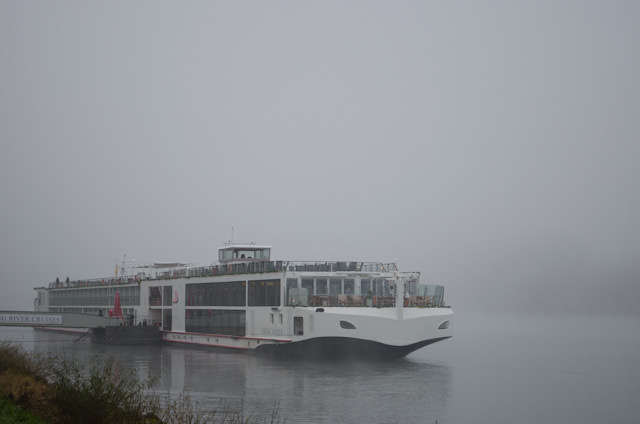 Still blanketed in a thick cloak of fog and swirling mist, Viking Rivers’ Viking Baldur docked this morning in the German town of Kehl. Our ultimate destination, however, was Strasbourg, France – located across the Rhine.

The Rhine acts as an informal border between the two countries, and our guide today made a point of joking that she had arrived in France before the rest of the bus as we crossed over the bridge that took us into the heart of the city. 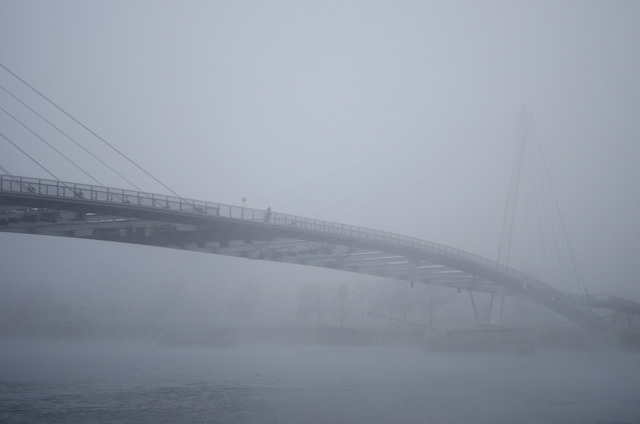 Fog kept temperatures in both Kehl and Strasbourg below freezing all day. Photo © 2013 Aaron Saunders

Of course, both France and Germany are part of the European Union (EU), and as such, there are no border formalities to clear; signage simply changes from German to French. Strasbourg is also the location of the European Parliament, which controls the EU budget and oversees some 20 member states from a building that looks remarkably like an ocean liner out of water.

But in December, even the European Parliament takes a back-seat to the Capitale de Noel. Strasbourg boasts ten Marchés de Noel, or Christmas Markets, spread throughout the historic city center. 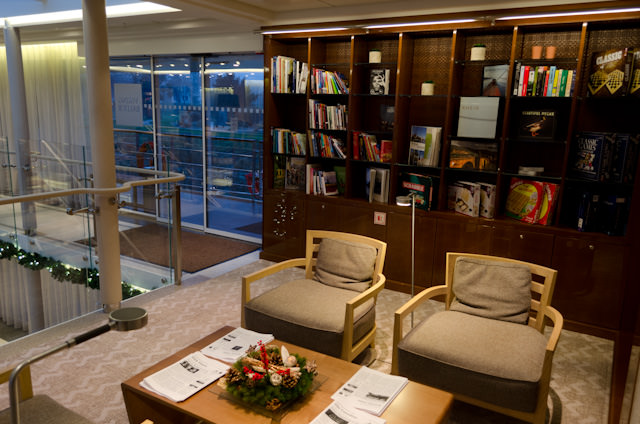 Haven’t read up on your next port of call? Don’t worry – Viking Baldur’s well-stocked Library can help! Photo © 2013 Aaron Saunders

There may be ten, but don’t assume that any two markets are alike. In fact, they’re extremely different in terms of theme, wares, food, and even beverages.

At the Place Gutenberg, for example, you can find the Croatian-themed Christmas Market, with shops that have come up from Zagreb. Adjacent to Strasbourg’s gorgeous Opera House at Place Broglie is the German-themed Christkindlesmarik, perhaps not surprising given the close proximity between the two countries here. And over at Place d’Austerlitz, near where the motorcoaches for visiting tourists park, is the market for everything from this local region of France, known as Alsace. 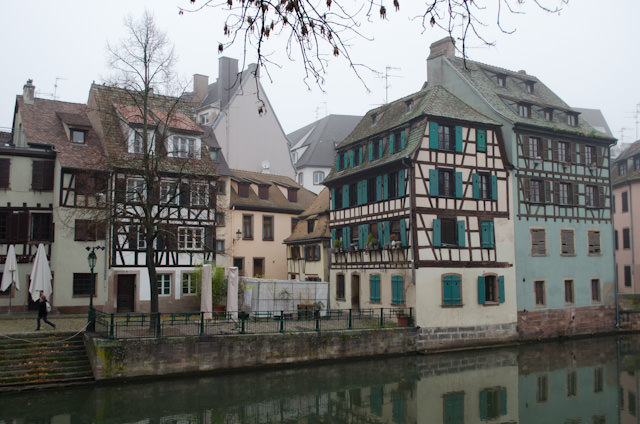 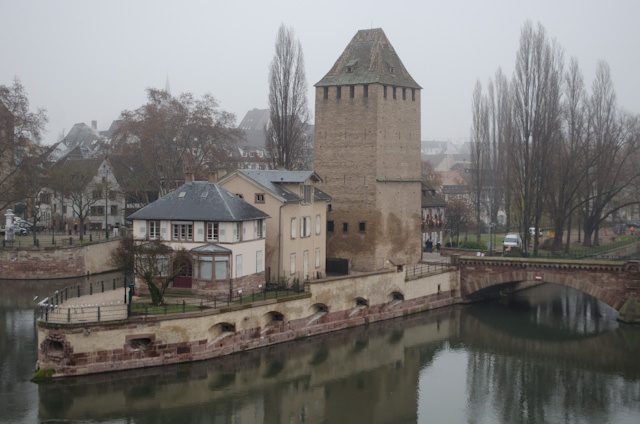 Our complimentary tour today involved a 45-minute motorcoach ride before setting out on a 90-minute stroll through Strasbourg. For guests who didn’t want that much physical activity, a “Leisure” tour option was offered that eliminated the walk through the city center. It’s great that Viking offers those options on many of their tours ashore, as it allows guests to tailor their day to suit their personal activity and mobility levels. 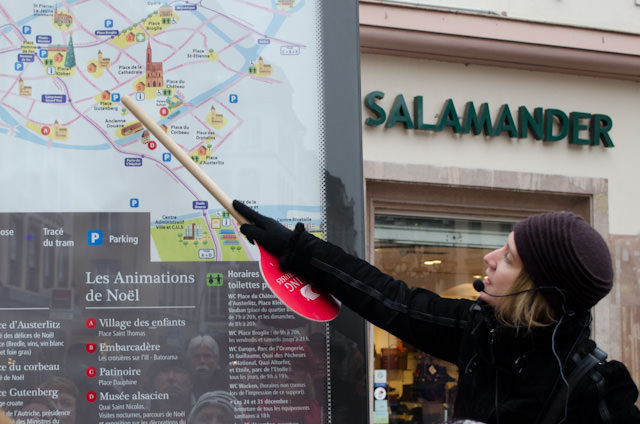 Our local guide shows us the way in Strasbourg before the Christmas Markets snatch our attention. Photo © 2013 Aaron Saunders 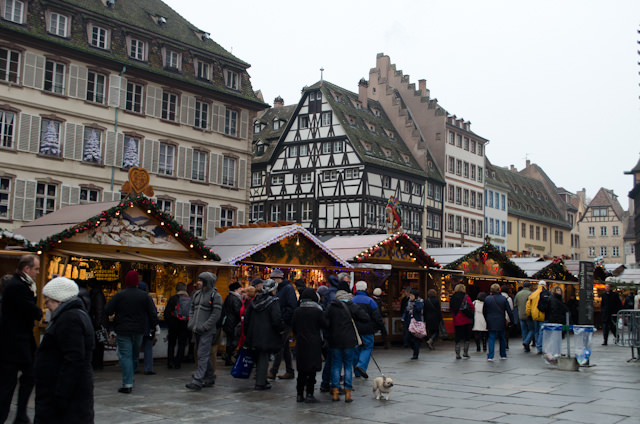 Browsing through our first Christmas Market in front of the Strasbourg Cathedral. Photo © 2013 Aaron Saunders

I enjoyed Strasbourg on all levels. It’s a great city filled with very friendly people. When I pulled my map out while strolling along Rue de la Haute-Montee en-route to Place Kleber, I was impressed that a woman almost immediately stopped to ask if I needed any help – in both French and English. 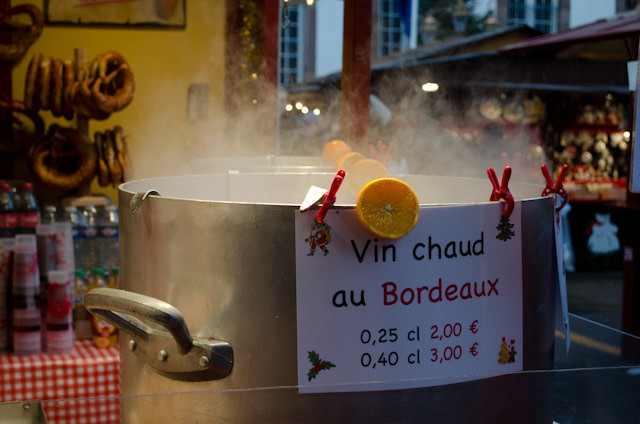 Gluhwein! Or, since we are in France, Vin Chaud. Photo © 2013 Aaron Saunders 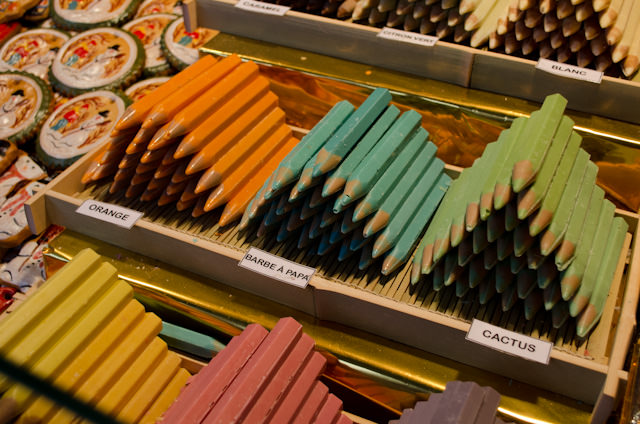 Each market has its own unique wares – like these chocolates styled as pencil crayons. Photo © 2013 Aaron Saunders

My French is terrible and my accent isn’t much better, but I am always trying when I visit France. Here’s why: I appreciate the French way of life. I like that you can pop into a shop for some fresh bread, some meats and cheeses, and a bottle of wine, and you’ve got yourself a heck of a good lunch – or dinner. An entire sandwich only runs about seven Euros, while at home something comparable would easily run $15 – if you could find a place with fresh sandwiches. 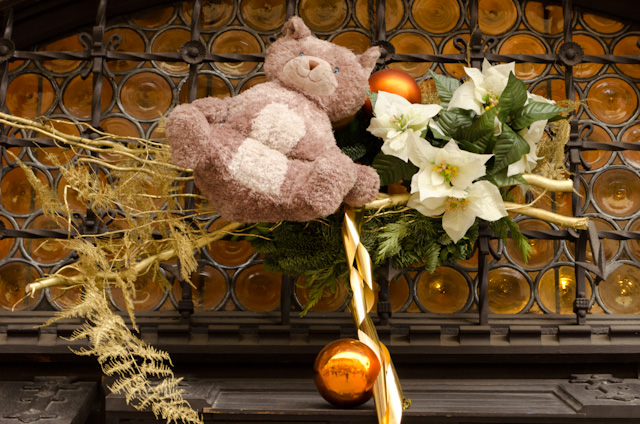 Christmas decor of all kinds is everywhere in Strasbourg. Photo © 2013 Aaron Saunders

It’s also worth mentioning that Strasbourg goes all out when it comes to Christmas décor. From the Petite France district to Place du Chateau, buildings are adorned with teddy bears, oversized bobbles, wreaths, pinecones, lights, presents and even a ten-foot-tall Gingerbread man.

One of the city’s most well-known traditions towers over the Place Kleber: a 30-metre tall Christmas tree known as Le Grand Sapin in French is as imposing as it is magical. I assume it’s strikingly beautiful when lit at night, illuminating the decoration work done by Antoinette Pflimlin. 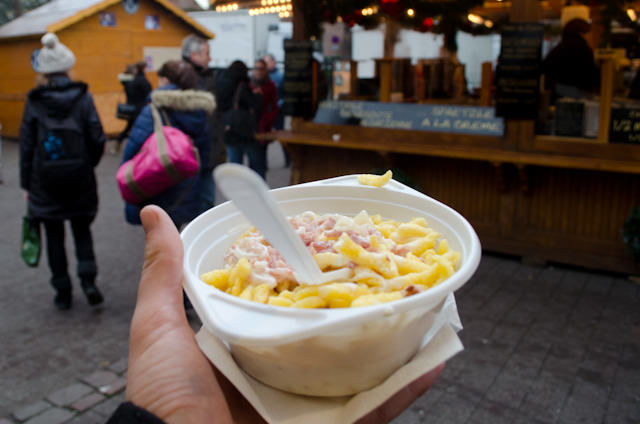 Lunch today was half-German, half-French, and enjoyed in front of Strasbourg’s Opera House. Spatzle is a German dish, typically, but this one was made with a creamy cheese sauce from Alsace, and topped with thinly-sliced cured meats, so I felt it was a nice cross-over. A very “middle-of-the-Rhine” sort of lunch. And at €5, it was super-affordable and far more than I could actually eat.

After all, I had to save room for some Gluhwein – or Vin Rouge Chaud (Hot Red Wine) here in France. Every market had huts with massive steel pots simmering, the scent of mulling wine spilling out of them and wafting over the entire market. 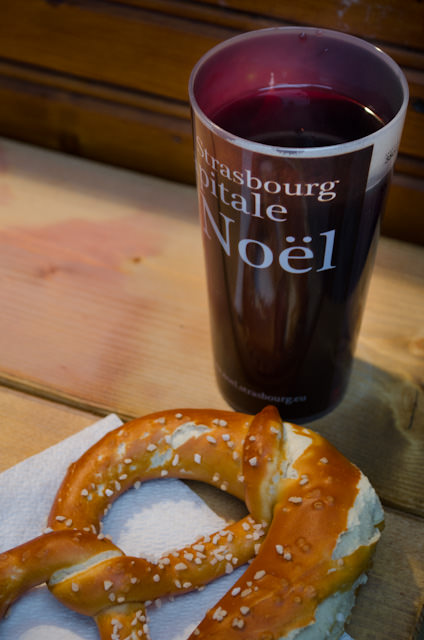 Strasbourg was quite interesting in that they utilised eco-friendly, biodegradeable plastic cups throughout their Christmas Markets. They’re still attractively decorated, and you still get your €1 back should you elect to return the cup, but I missed the ceramic mugs. Fortunately, one vendor I went to in the Place du Temple neuf still had them on offer for €4.

This afternoon, Viking offered an optional excursion at an additional cost to enjoy a wine tasting in Alsace. While pricing was very reasonable, I just couldn’t bring myself to leave the Christmas markets of Strasbourg. Viking had shuttles running back and forth between the ship in Kehl and Strasbourg; all you had to do to return to the ship was to meet in front of the post office next to the Strasbourg Cathedral  at the appointed times. To ensure you don’t forget, times are printed on a small business card that you can simply tuck into your wallet. It’s a very handy feature, and a great idea. 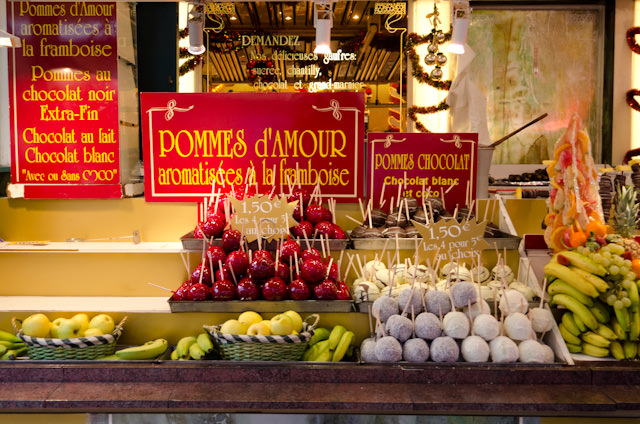 That’s one thing I really like about Viking: they include plenty of nice little touches that, really, they probably don’t have to. From fresh fruit and water in your stateroom to a policy that encourages guests to bring their own wine aboard from the towns they visit to enjoy onboard – with no corkage – the line seems to have clearly thought through the wants and needs of their guests. 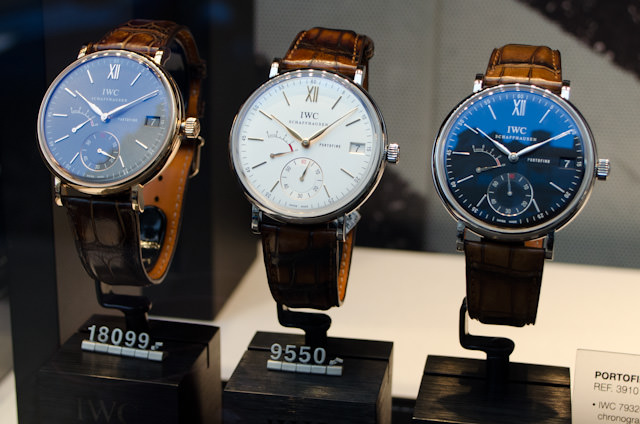 There was some grumbling today amongst the guests about the location of the ship relative to the road where motorcoaches were allowed to park, about 15 minutes walking distance away. But it is a flat, scenic walk – even in the cold fog that doesn’t seem to want to leave us – and would probably be very pleasant during the summer months. 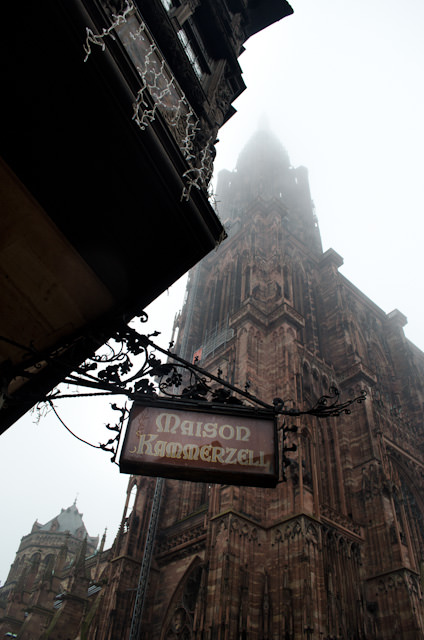 But more to the point, docking locations are what they are. Some are convenient, others are not. Nuremberg is a fantastic example of this: the docking location along the Main-Danube Canal is so far out of town that shuttles are the only practical way to access the city. Others, like Passau or yesterday in Breisach have you literally docked in the town. 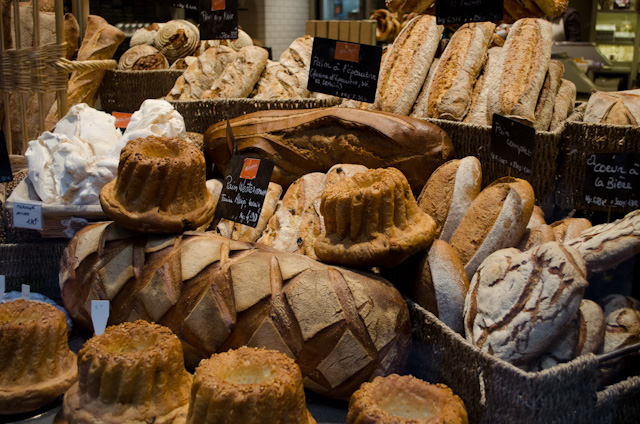 Reasons to Love France: fresh read – and lots of it. Photo © 2013 Aaron Saunders 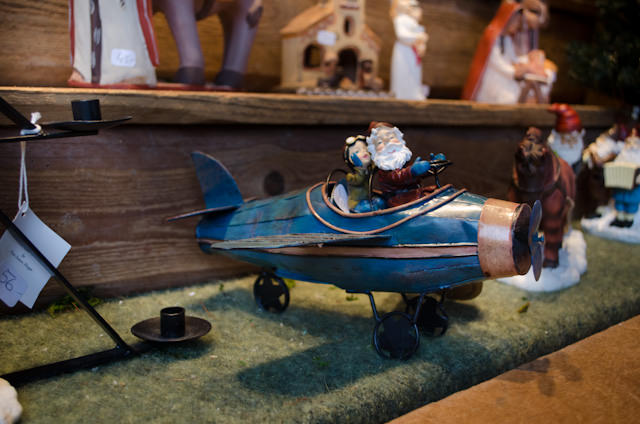 The Christmas Markets of Strasbourg did not disappoint! Photo © 2013 Aaron Saunders 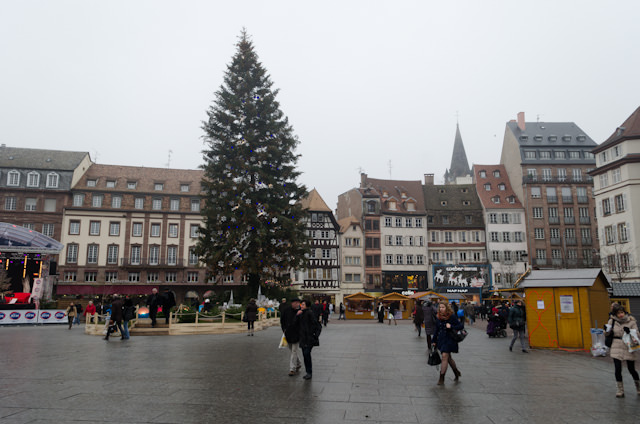 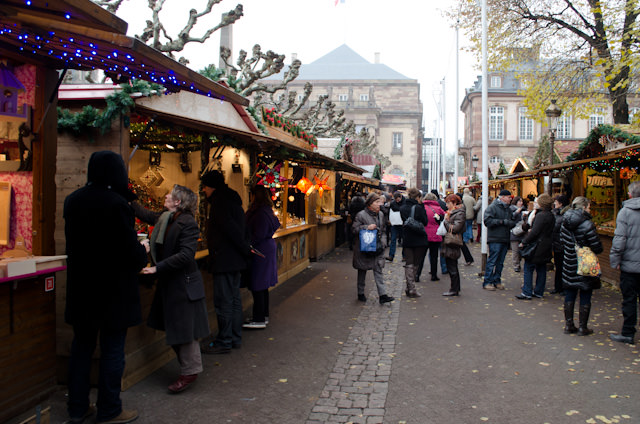 Simply wandering around Strasbourg’s ten markets is fun in and of itself. Photo © 2013 Aaron Saunders

With shuttles provided to and from the ship on a complimentary basis this afternoon, there was no reason why guests couldn’t choose to take advantage of the extra time in Strasbourg, and I love that Viking provides guests with the opportunity to, in effect, plan their own day, if they wish to. 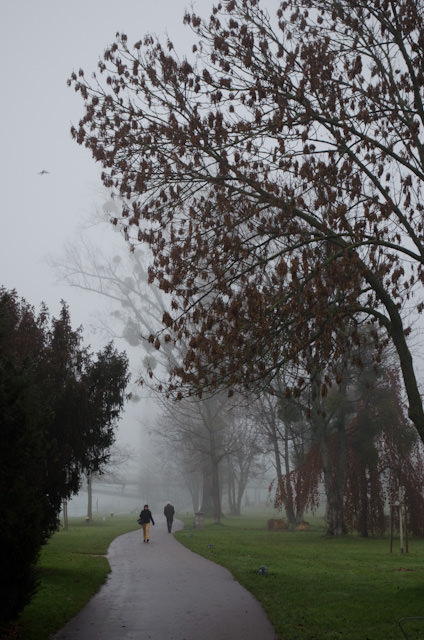 The walk from the Viking Baldur to the motorcoaches may be long, but it’s very picturesque. Photo © 2013 Aaron Saunders 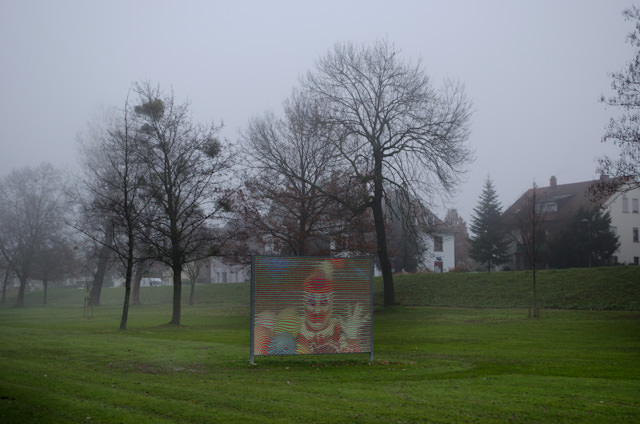 The Clown portrait? Not so much. Photo © 2013 Aaron Saunders

As I write this, I am readying for another excellent dinner here onboard Viking Baldur. I’ve always enjoyed the food Viking puts out, but I feel like this menu is a definite step-up. Perhaps nothing has changed at all, but it struck me today that everything I have eaten has been nothing less than spectacular, and the wine continues to flow freely – just as Viking says it will in their brochures. In fact, I have yet to see the bottom of my wine glass at dinner on any Viking vessel to-date.

Finally, I want to note something that I have pointed out in the past, but which I think is worth mentioning again: the Viking Longships are the quietest ships I have ever sailed aboard. My stateroom is located almost all the way aft, yet I can only hear the propellers and feel vibration if we are docking or undocking. Otherwise, these ships are so whisper-quiet that you barely realize you’re moving.

It’s a subtle but powerful feature, and one that not every river cruise line can lay claim to. 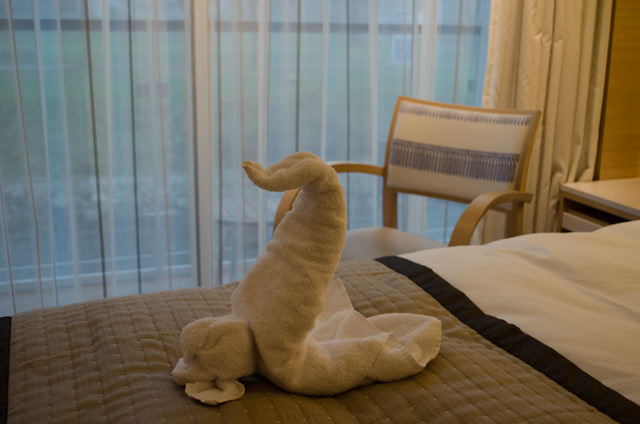 A Towel Animal Greeting in my stateroom. Photo © 2013 Aaron Saunders