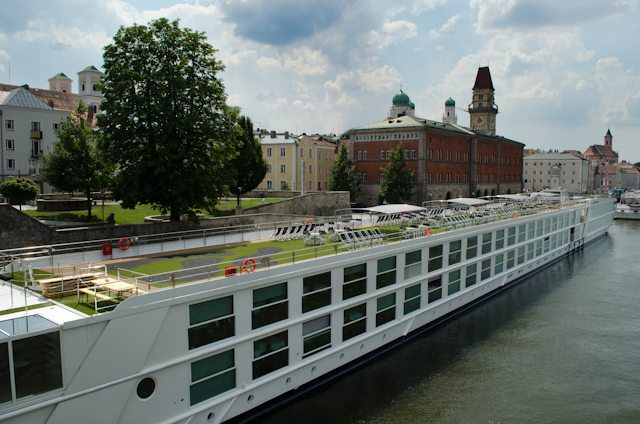 Today, guests aboard Emerald Waterways’ Emerald Star had three distinct ways to spend their day: an optional, full day excursion to Salzburg, Austria; an optional, full-day journey to the storybook village of Cesky Krumlov in the Czech Republic; or the option to stay onboard to enjoy a morning of scenic cruising along the Danube, followed by a visit and guided walking tour in Passau, Germany. 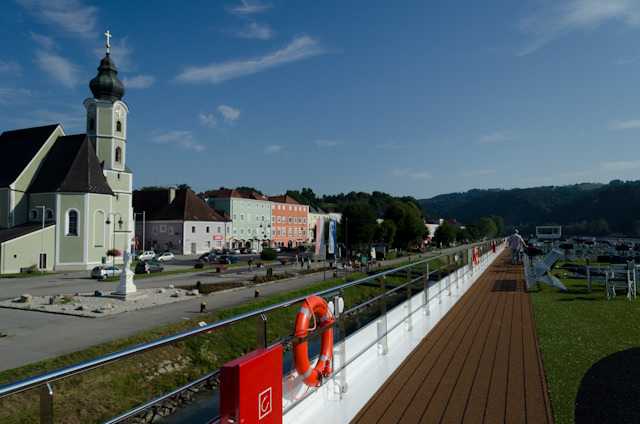 This morning, Emerald Star docked briefly in the small Austrian town of Aschach to disembark guests traveling on to Salzburg and Cesky Krumlov. Photo © 2014 Aaron Saunders 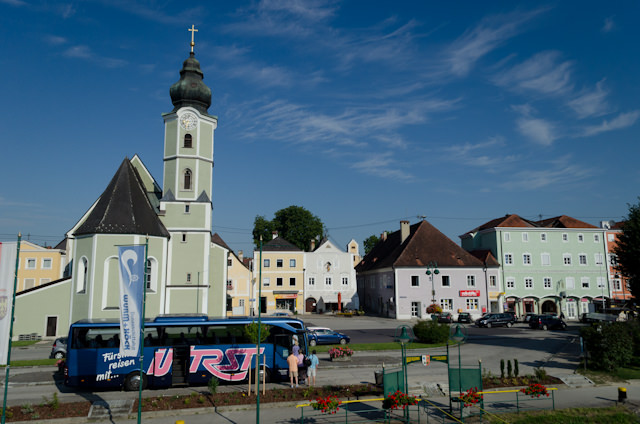 Now, that’s a heck of a tough choice. I’ve been to Cesky Krumlov before, and absolutely fell in love with the town that has remained largely untouched for hundreds of years. Conversely, I’ve never been to Salzburg, and have always wanted to go there. However, both of those options are full-day excursions that would eliminate the option of touring Passau – and I love Passau. The chance to spend a relaxing morning onboard Emerald Star as she makes her way up the Danube followed by an afternoon in Passau was an opportunity that was too good to pass up. 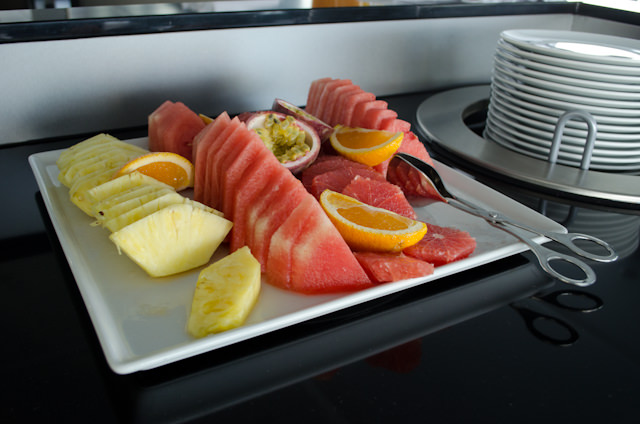 Enjoying a light breakfast in the Horizon Lounge. Fruits, yogurts and breads are available each morning here. Photo © 2014 Aaron Saunders 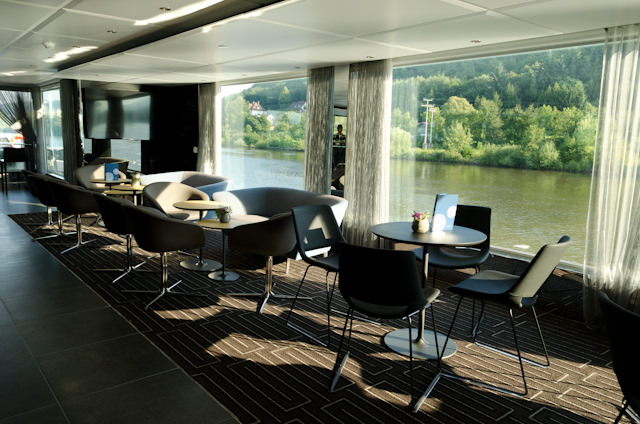 The Horizon Lounge: the place to be for scenic morning cruising. Photo © 2014 Aaron Saunders 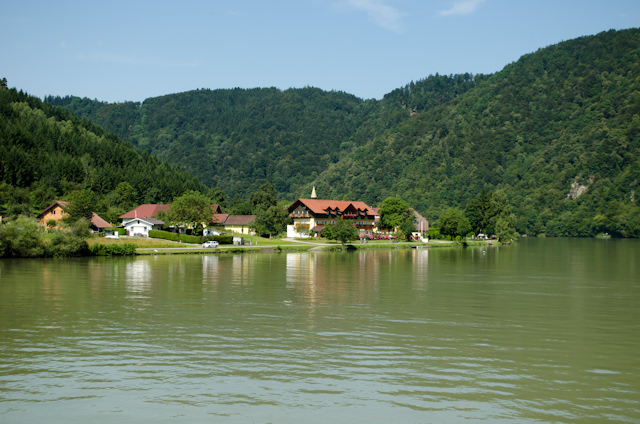 Setting sail along the Danube for a morning of scenic cruising! Photo © 2014 Aaron Saunders

Of course, a morning of scenic cruising allows us to answer some reader questions that have been emailed in the last few days – and both of them concern Scenic Tours, Emerald Waterways’ big sister. Both Emerald and Scenic were founded by Australian entrepreneur Glen Moroney, and two readers – who have never sailed either line – wanted to know what the basic differences between the two were. 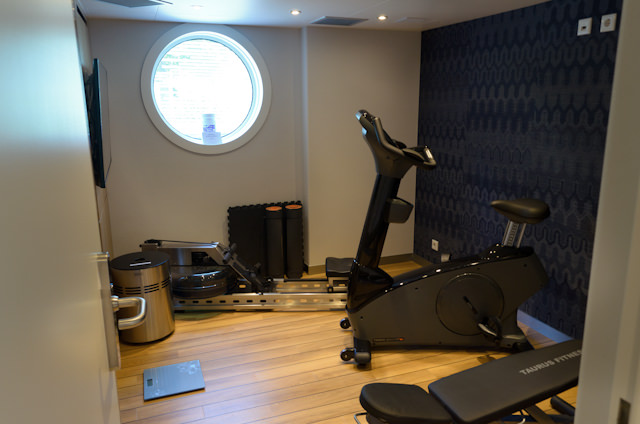 Taking the time to explore the Emerald Star: the small but functional Fitness Center on Deck 2 aft. Photo © 2014 Aaron Saunders

Scenic offers guests a few more ‘bells-and-whistles’ aboard its ships, which are known as “Space Ships.” Those ships include some luxe features like butler service, all beverages complimentary at any time of the day, and all tours included gratis. Scenic’s touring options ashore are also more extensive – and possibly extravagant. On a given day, you may have two or even three options, whereas on Emerald you may only have one or two options. Scenic even offers a unique feature known as Scenic Tailormade; a GPS-enabled commentary device that works both onboard ship and ashore in cities like Vienna. If you like the idea of a ‘do-it-yourself’ tour, Tailormade is as good as gold. 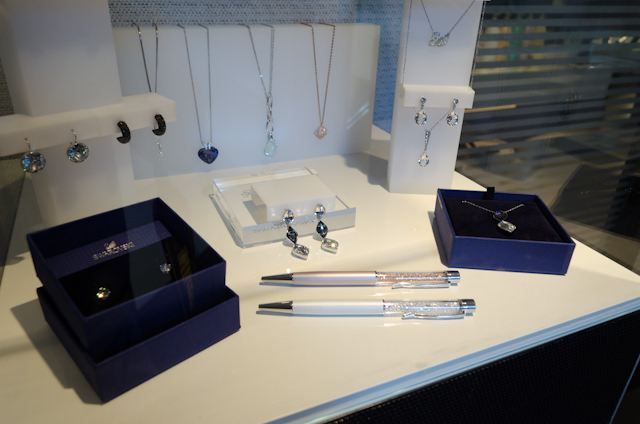 A small gift/jewelry shop is located on Deck 1 outside the Salon. Photo © 2014 Aaron Saunders

Scenic, however, comes at a higher price point. Emerald Waterways has been designed to offer a similar level of personal service, but with a few more extra-cost options and a bit less choice. However, in exchange, the initial cost of sailing with Emerald is lower, and more on-par with offerings from lines like Viking River Cruises.

Where Emerald really excels, in my opinion, is in offering river cruisers more than they can get for the price on other lines. Gratuities are included on Emerald, but additional on many competing lines. Transfers between the ship and the airport are also included on Emerald, but not necessarily with other lines in the same price category. Are those costs deal-breakers? Of course not. But it is relaxing to know that you don’t have to worry about purchasing add-on transfer services, or paying gratuities at the end of your voyage. 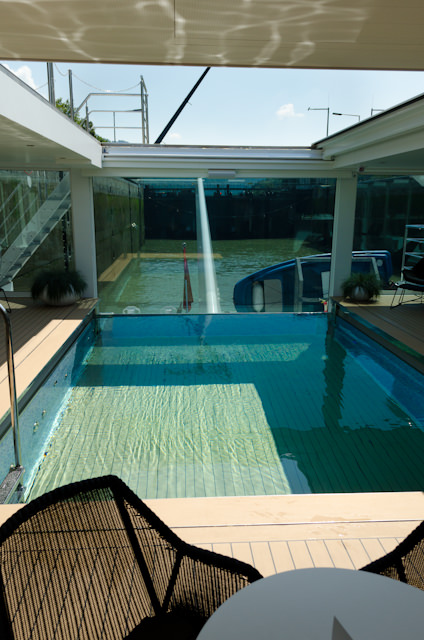 I also think it’s worth mentioning that from time to time, I have to remind myself that Emerald Waterways has only been operational for two months, and the Emerald Star for a little more than a month. That the product is this polished right out of the gate speaks highly to the skill of the crew onboard, many of whom have come over from Scenic. 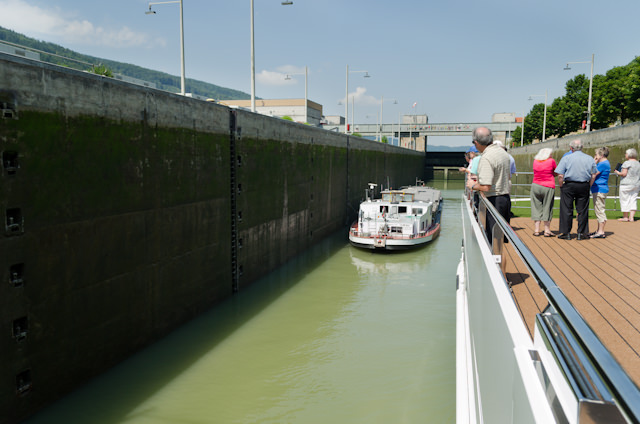 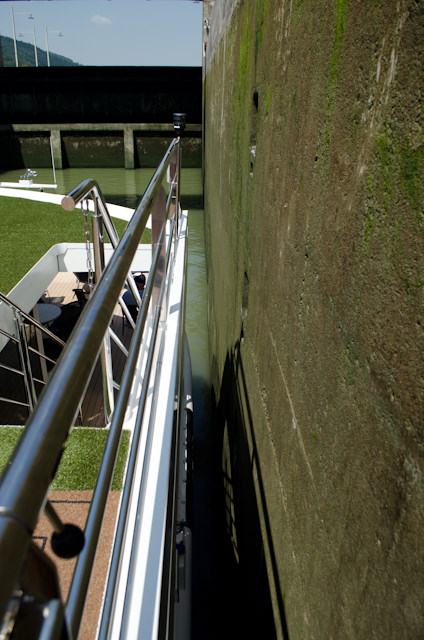 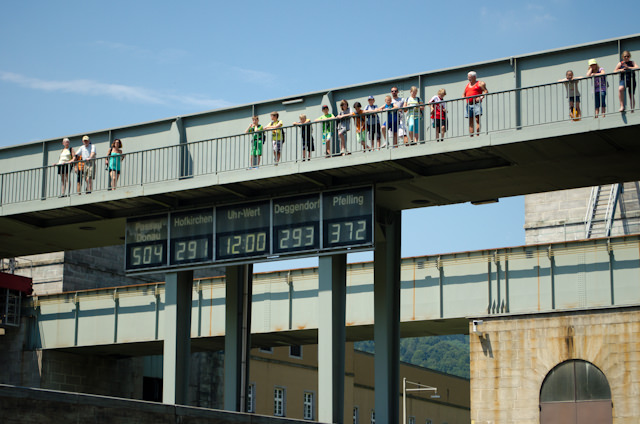 Onlookers watch our progress through the locks. Photo © 2014 Aaron Saunders

As we sailed along the Danube, numerous guests made use of Emerald Star’s attractive swimming pool as temperatures soared to 31°C and the sun deck heated up. Despite the heat, Emerald Waterways highly accommodating bar staff made sure guests were hydrated with a variety of beers, wines, soft drinks and – of course – plenty of water and iced tea, the latter two of which were placed out on a serving station behind the navigation bridge where guests could help themselves. 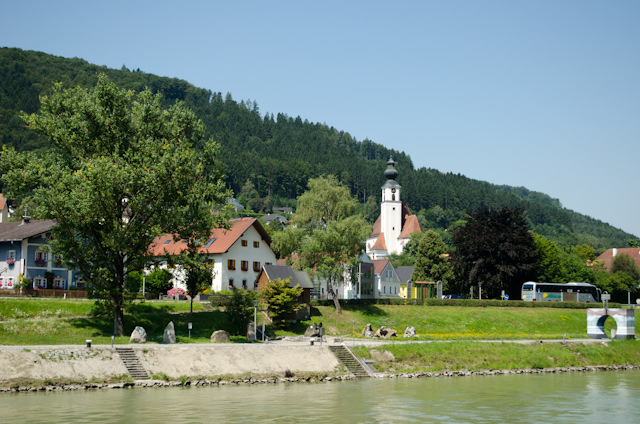 Temperatures soared by midday, but made for some spectacular Danube scenic cruising. Photo © 2014 Aaron Saunders 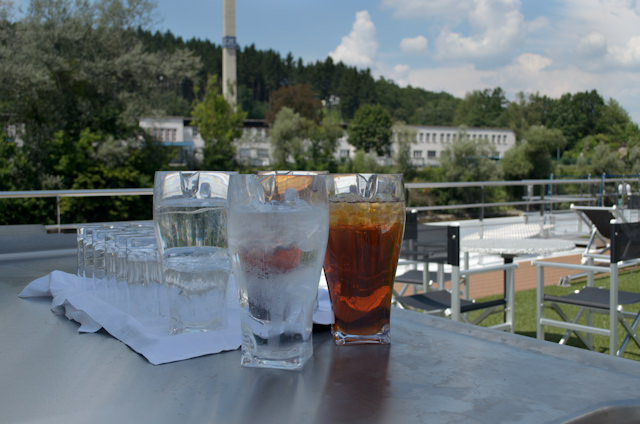 Pitchers of cold water and iced tea were placed on the Sun Deck for guests to help themselves to. Full bar service was also available. Photo © 2014 Aaron Saunders

Just after 14:15, we arrived at our first port in Germany. Passau is incredibly scenic to approach from the east, as it’s remarkably easy to see the confluence of three rivers that join on the eastern tip of the town: the Danube, the Ilz, and the Inn. 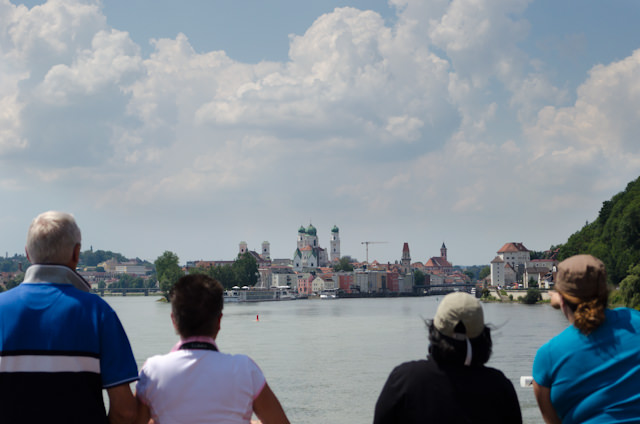 Passau has a population of just over 50,000 inhabitants. If you haven’t been there, chances are you’ve heard of it. Last year, Passau experienced record flooding on a scale that hasn’t been seen since the middle ages. Seeing pictures of it on the news, flooded out and covered in silt, broke my heart. This is my fourth visit to Passau, but my first since the floods, and even a year later, the damage is still visible – and still being repaired. Water damage is still visible on the foundations of many buildings, and signs indicating that restoration work is still ongoing are everywhere along the waterfront, where damage was the most extensive.

Passing under the Luitpold Bridge prior to docking in Passau. Photo © 2014 Aaron Saunders

Passau is an amazing city, and I didn’t regret my decision to stay onboard one bit once I saw its beautiful skyline come into view. Not that I did much; I basically did some window shopping, which was good for me but bad for my credit card when I found two new shirts and a sports coat at a store on Ludwigstrasse, Passau’s pedestrian-only shopping district.

A few photos from my afternoon ashore: 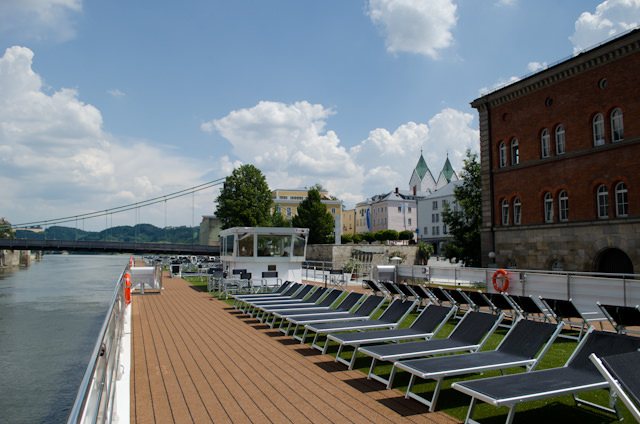 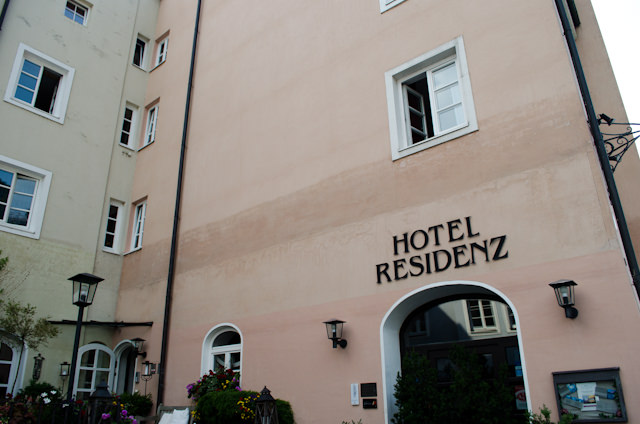 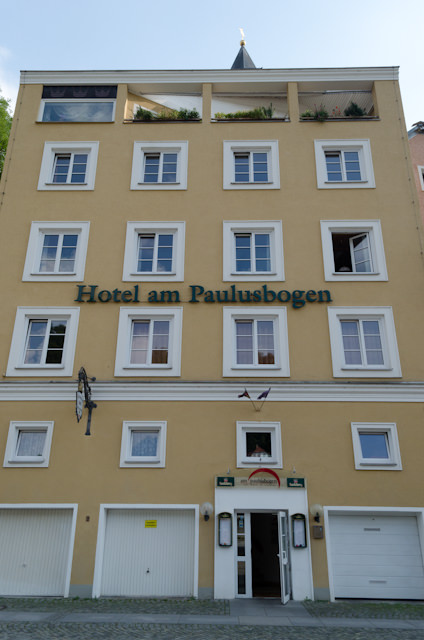 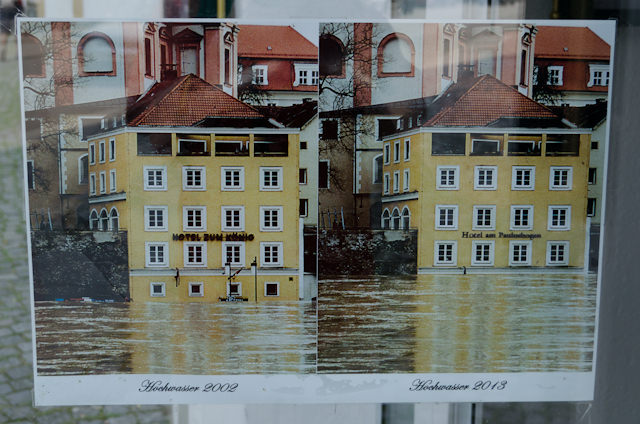 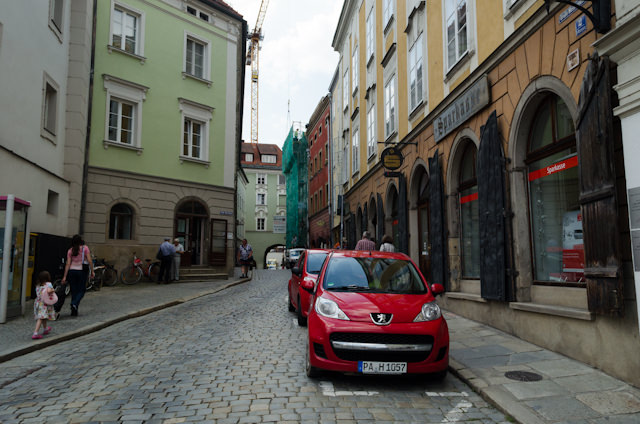 The Old and New on display in Passau. Photo © 2014 Aaron Saunders 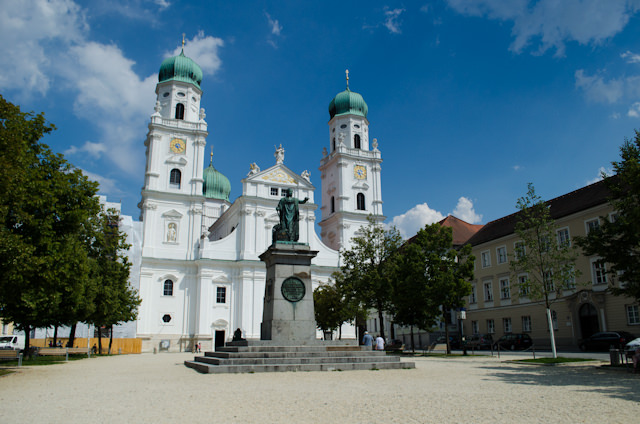 Passau’s St. Stephen’s Cathedral, also simply known as the Dom, has the largest cathedral organ in the world, with 17,774 pipes. Photo © 2014 Aaron Saunders 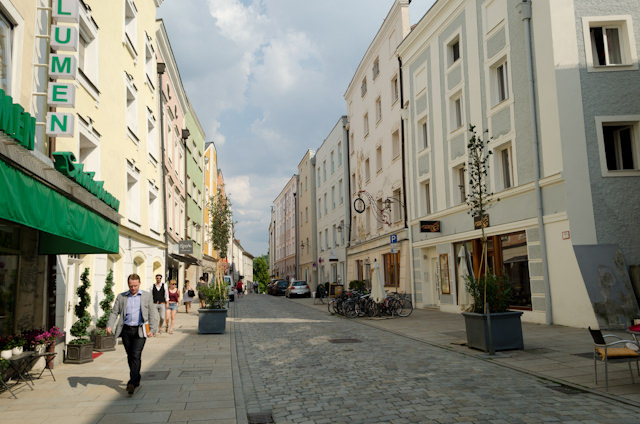 The streets of Passau are very pedestrian-friendly, and the entire city can easily be explored on foot. Photo © 2014 Aaron Saunders 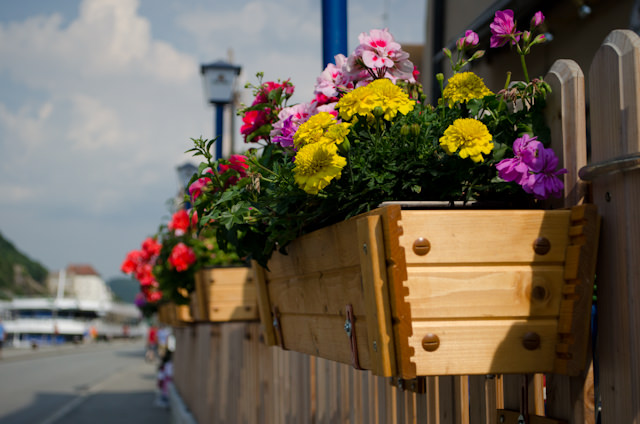 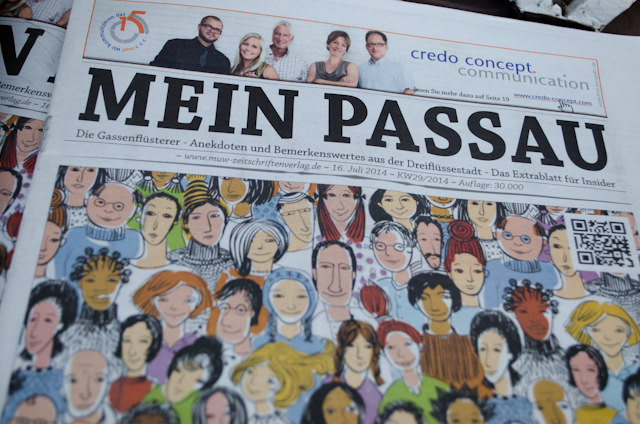 Two interesting things happened when I returned from my walkabout in town. First, since temperatures were pushing 33°C, the roof of Emerald Star’s swimming pool was opened to the elements. We were also docked with our stern nearly level with the Luitpoldbrucke Bridge, and it was an object of fascination for those pedestrians crossing the bridge to look down into the pool. There was much excited pointing and gesturing; so much so that I think it might behove the company to paint the Emerald Waterways logo onto the surface of the white steel roof cover that retracts over to the port side of the ship when in use. 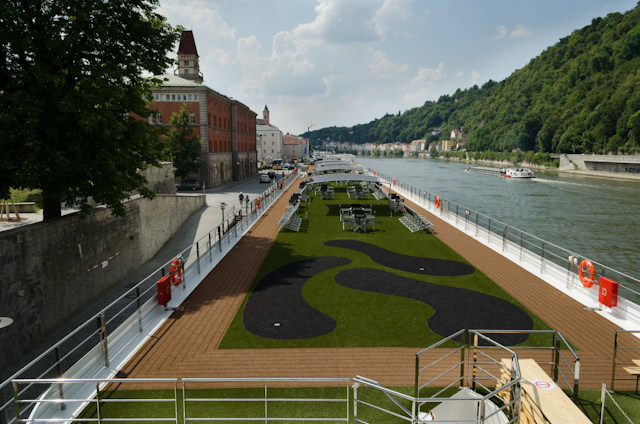 A unique view of the Emerald Star’s Sun Deck, as seen from the Luitpold Bridge in Passau. Photo © 2014 Aaron Saunders

The other interesting thing was talking to my fellow guests that had participated in the alternate excursions to Cesky Krumlov and Salzburg. Despite frequent rainstorms that we weren’t treated to, the Cesky group fell in love with the storybook Czech Republic village – though, perhaps not the rather meat-and-potatoes styling of the local food.

Salzburg, likewise, was also a hit, though only a dozen or so guests participated in it. On my other river cruises, Salzburg’s been so popular that it has completely filled two coaches. I don’t have any concrete evidence for this, but my personal assumption may be that the movie The Sound of Music does much to drive American audiences to see Salzburg, but perhaps less so for those from other countries. 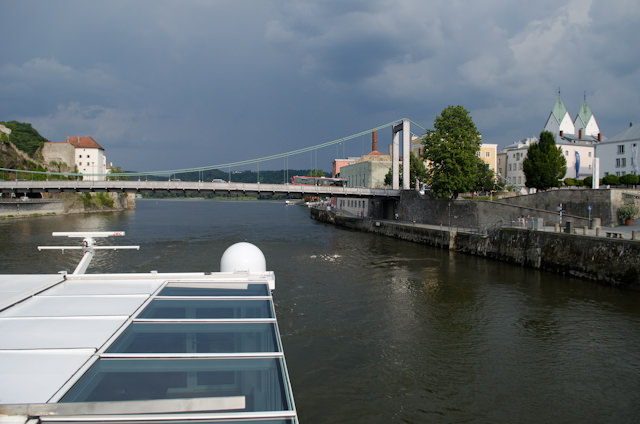 After our departure from Passau, the evening progressed much as our other evenings have here onboard: a long and fabulous dinner coupled with post-dinner drinks and conversation in the Horizon Lounge.

Late tonight, however, I learned about this afternoon’s shoot-down of Malaysian Airlines Flight 17 over the Ukraine. To say it rattled me is an understatement; 9M-MRD is the second Boeing 777 that the airline has lost this year, but this time, there is little doubt about what happened, but substantial doubt over who did it.

It’s hard to reconcile that fact as I watch the Danube slip by me from my balcony, surrounded by what seems like every creature comfort. This afternoon was a wonderful one for those of us onboard Emerald Star; it was a very different one for 280 passengers flying from Amsterdam’s Schiphol Airport to Kuala Lumpur. 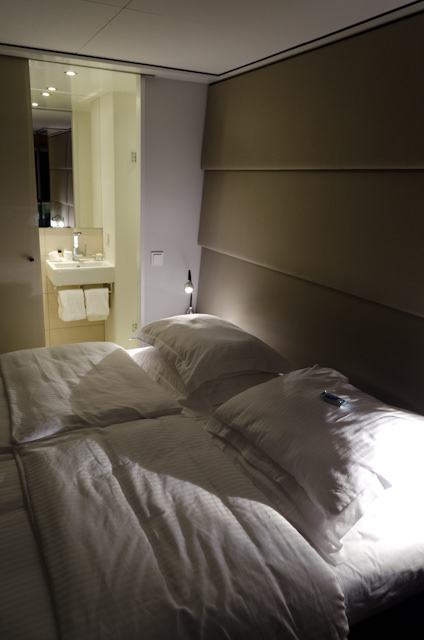 For me, it’s a reminder to be grateful for experiences we have in life – in particular, the ones we’ve enjoyed for the last week here in Europe. It’s also what I’d like to say to those readers who are following along who are considering river cruising or traveling to Europe or any ‘bucket list’ item: Do it now, because there are no guarantees thing will unfold the way you expect them to. 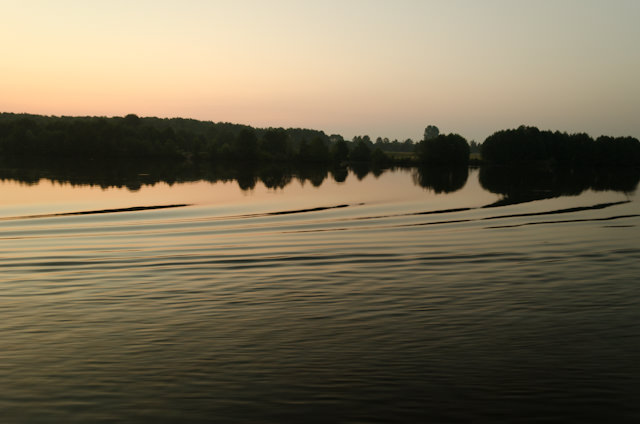