Cruising the Mekong aboard AmaLotus 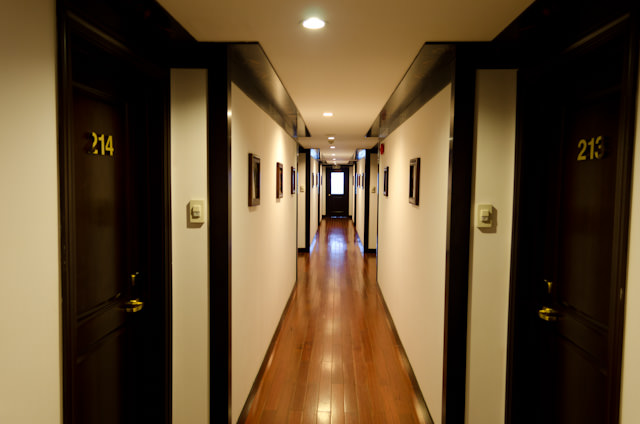 A day of scenic cruising provides the perfect opportunity to take a closer look at AmaWaterways’ AmaLotus. Shown above is the Deck 2 stateroom corridor, facing forward. AmaWaterways is one of the only lines to utilise ships with interior stateroom corridors along the Mekong. Photo © 2013 Aaron Saunders

AmaWaterways’ AmaLotus weighed anchor just after 7am this morning and moved away from her berth in Phnom Penh as we prepared to spend a relaxing day sailing down the Mekong River, bound for Vietnam. 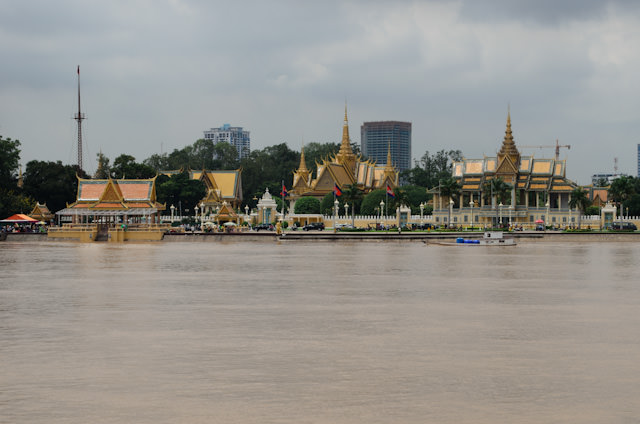 Since so much of these reports have been about the journey that is at the heart of this Cambodia and Vietnam river cruise, today is an excellent day to focus specifically on the AmaLotus herself. 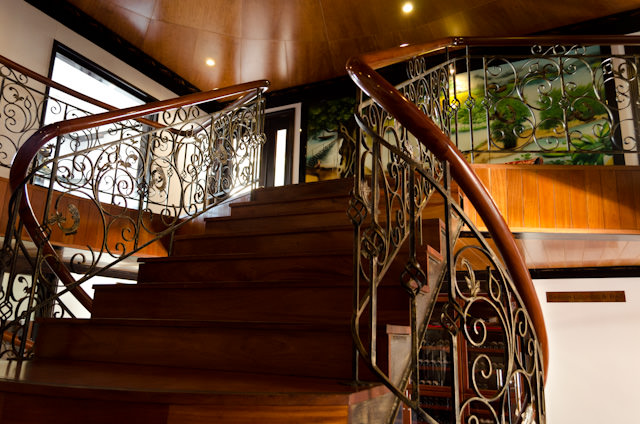 Constructed in 2011, she is just shy of 70 feet longer than La Marguerite, which is also utilised by AmaWaterways along the Mekong on alternating dates through most of 2013 and 2014. AmaLotus is a single foot wider and carries just 124 guests and a crew of 50. 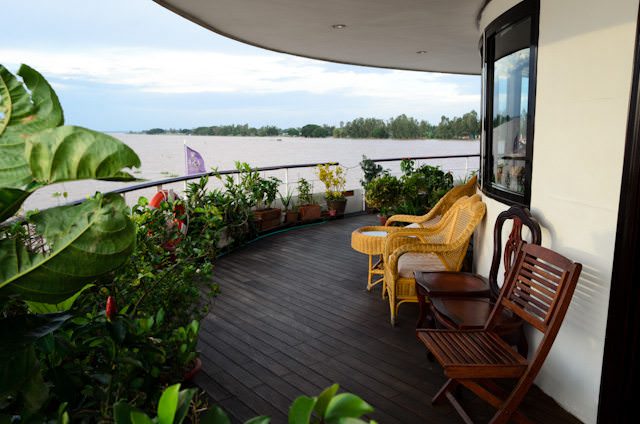 All the way forward on Deck 3 is the Navigation Bridge aboard AmaLotus, along with a fantastic (and hidden) open deck area. Photo © 2013 Aaron Saunders 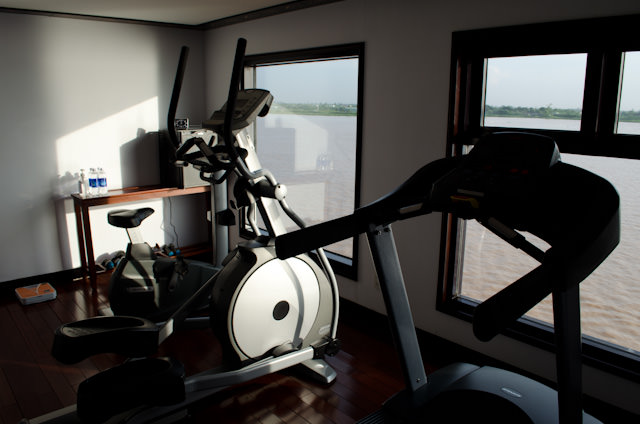 Located on the starboard side of Deck 3 is a small but well-equipped gymnasium that is used frequently on my sailing. Photo © 2013 Aaron Saunders

Aft of the central staircase, with its wrought-iron railings and Colonial-style wooden accents, is The Spa aboard AmaLotus. There are three separate treatment rooms located on the port side of the atrium, while a small but very functional gymnasium is located on the starboard side.

Spa treatments are surprisingly numerous, and exceptionally-priced in both U.S. Dollars and Vietnamese Dong (VND). Appointments can be made onboard, either by visiting Reception or by dialing 900 on your stateroom telephone.

I don’t know about you, but $65 is the least expensive Hot Stone Massage I’ve seen in a long time. Most cruise lines throw a ‘1’ in front of the ’65’ when determining pricing.

Aft of the spa, a set of double-doors on the port and starboard sides of the ship brings guests to the fantastic outdoor Sun Deck. 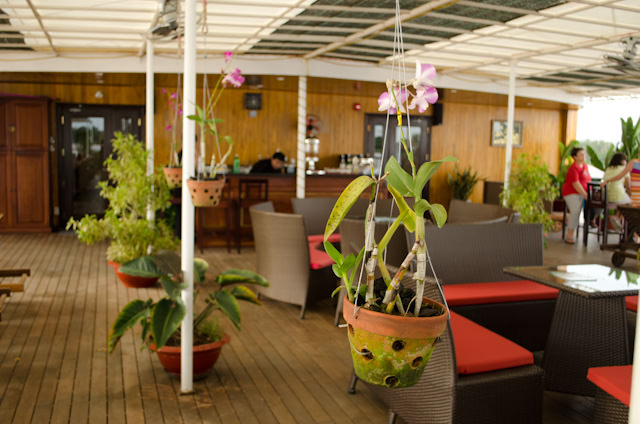 The outdoor Sun Deck, with its covered awning, hanging plants and comfortable loungers, is a great place to watch the Mekong drift by. Photo © 2013 Aaron Saunders

Covered by an awning to keep the harsh sun away, the Sun Deck is flanked on both port and starboard sides by comfortable padded loungers. Tables and chairs are available running along the centerline of the ship for those who want to relax with a cocktail and enjoy conversation with new friends.

Near the stern is a rather large (for a river cruise ship) pool, cooled to a refreshing temperature. Oddly, I’ve never seen anyone in it yet! 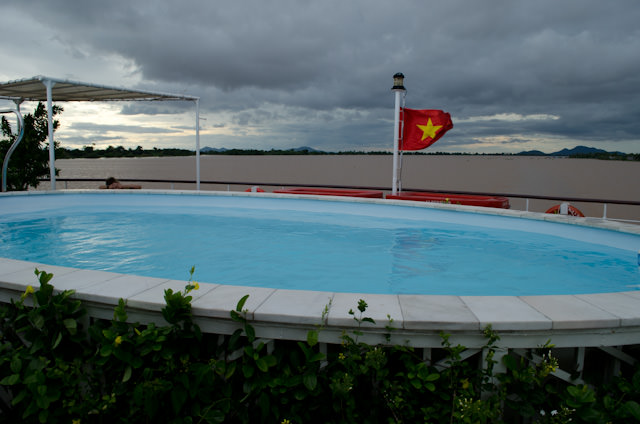 A fantastic swimming pool is located all the way aft on the Sun Deck aboard AmaLotus. Photo © 2013 Aaron Saunders

Despite the sometimes intense heat of this region, the overhead awning does a great job of keeping the pool deck cool and comfortable. There’s also quite a bit of natural wind along the Tonle Sap and Mekong rivers that prevents things from getting stifling. Of course, the fact that everything but premium spirits and wine can be picked up free of charge from the outdoor bar helps too. 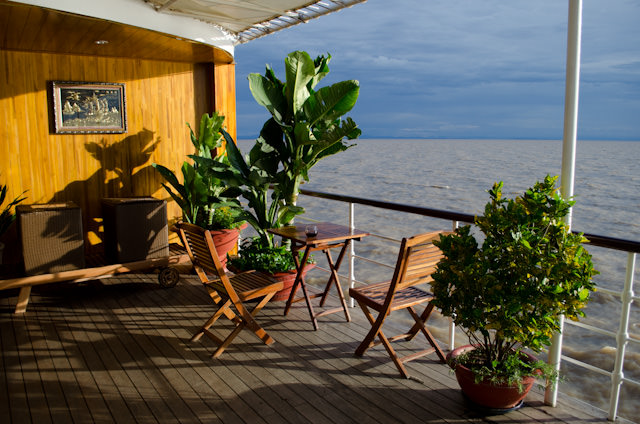 Ample seating of all kinds. This is my favorite spot on the Sun Deck. Photo © 2013 Aaron Saunders

One deck down is Saigon Deck 2. Forward of the central atrium staircase are 22 Category A staterooms like mine. These are 226 square feet and include both French and step-out balconies. Initially, I didn’t think I’d find a use for both types of balcony in a single stateroom, but AmaWaterways has made a believer out of me. I’ve enjoyed sitting in the cool climate of my stateroom reading with the French balcony doors open, and I’ve also liked standing out on the real balcony when we’re passing through a particularly beautiful stretch of the Mekong. 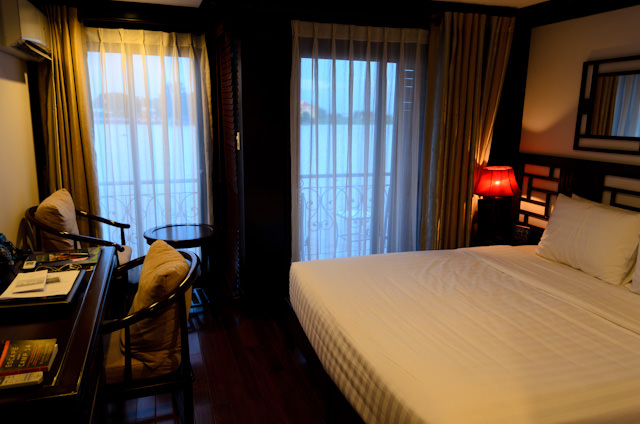 Another look at my Category A stateroom on Deck 2. At 226 square feet, there’s plenty of room to move around, and the inclusion of French and Full balconies is a real treat. Photo © 2013 Aaron Saunders

Rooms are decorated with beautiful Colonial accents and adorned with polished woods for a natural beauty you don’t normally find on ships. In fact, unlike ocean cruise ships, this is real wood – real wooden plank flooring, real wooden cabinetry, desks, bedframes – you name it.

Another huge bonus onboard is the presence of dual 110/220 V electrical outlets in staterooms. These can accept both North American-style plugs along with the European two-prong variety without the need for an adapter. 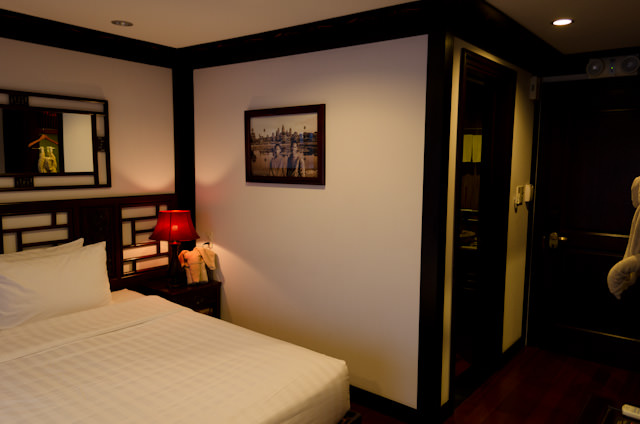 The reverse view, looking toward the door. To the right of the photograph are two large closets that can hold all the clothing you can bring with you. Photo © 2013 Aaron Saunders

On the port side of the Deck 2 atrium landing is the AmaLotus’s small Gift Shop that is stocked with a variety of souvenirs from Cambodia and Vietnam, along with a small assortment of basic sundries. If you need anything specific, you’re best bet is to hit a pharmacy in town. I had to do this when I ran out of deodorant and couldn’t find any in the gift shop.

On this itinerary, it is also a good idea to bring any North American or European medications or items you rely on, like antihistamines or pain killers, as you may not be able to find them over here, at least not in the brand name you might be used to. 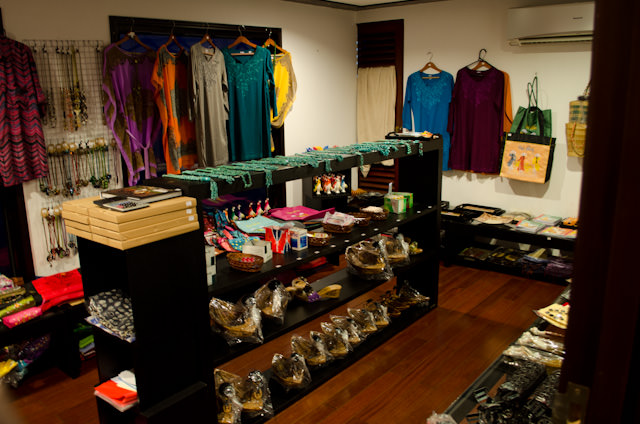 The Gift Shop onboard AmaLotus, located on the port side of Deck 2 adjacent to the main staircase. Photo © 2013 Aaron Saunders

Aft of the Gift Shop is the Saigon Lounge where most of the social activities take place onboard the ship. The entire passenger complement of the AmaLotus can fit in here in a single sitting, and the room is a popular gathering spot throughout the day, even when activities aren’t planned.

In the morning, coffee, tea and cookies are placed at the aft starboard side of the lounge, while during the evening, the complimentary specialty cocktail and mocktail of the day are available directly from the bar at the aft end of the Lounge. 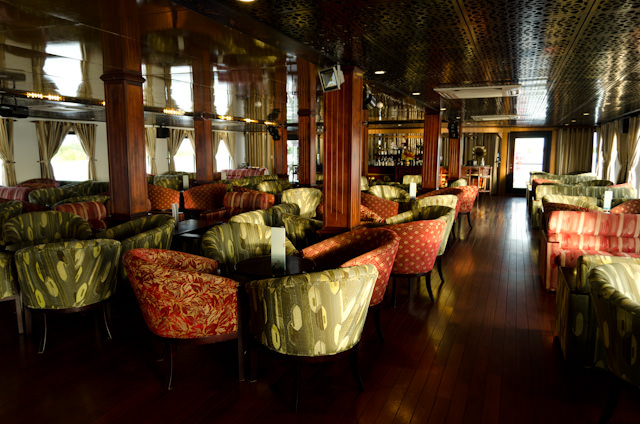 The forward end of the lounge boasts a small library with books that can be used by guests, along with four PC internet workstations. With regards to the internet: it wavers between slow and totally non-existent, and guests coming on this particular itinerary should not rely or count on it being operative. Remember, the AmaLotus is sailing through some very remote and developing places, and shipboard internet connectivity is far more difficult to acquire than on land. 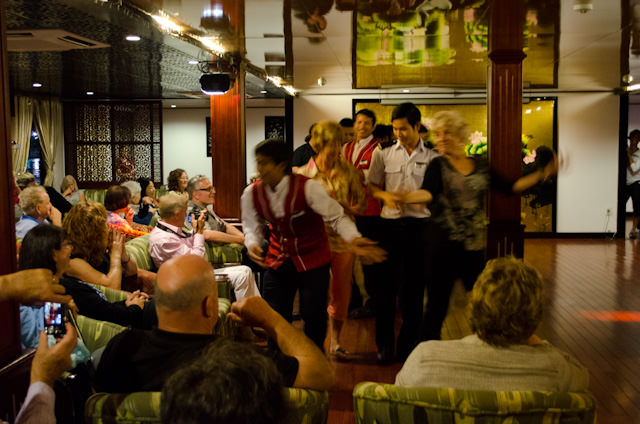 By night, the Saigon Lounge turns into the place to be for entertainment, great local drinks and fantastic conversation. Photo © 2013 Aaron Saunders

However spotty the connection, the complimentary internet AmaWaterways provides is still a nice luxury. Many other competing cruise lines don’t offer internet period on their Mekong trips, not to mention televisions and DVD players that are featured in every stateroom onboard the AmaLotus.

Aft of the Saigon Lounge is an attractive open-deck space overlooking the stern of the AmaLotus. It’s a great place to relax with a drink, and it is the only location on the ship where it is permissible for smokers to light up. On my sailing, though, I think there’s only a single smoker onboard! 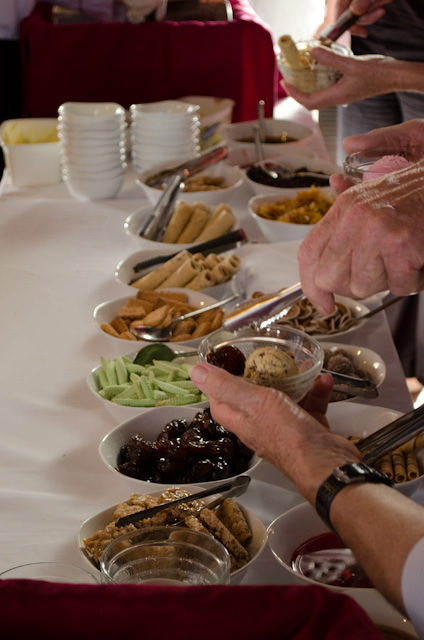 This afternoon, an Ice Cream Party was held at 4pm in the Saigon Lounge. Needless to say, it was quite popular! Photo © 2013 Aaron Saunders

The main embarkation deck aboard AmaLotus is Tonle Deck 1. Once again, all accommodations are forward of the central atrium staircase, but on Deck 1 there are 22 Category B staterooms which are exactly identical to their Category A counterparts on Deck 2. The only difference between the two categories is their physical location onboard the ship. 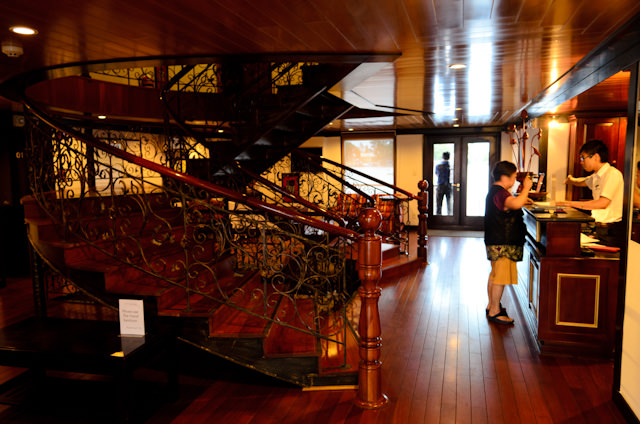 The central staircase aboard AmaLotus on Deck 1. The Reception Desk is to the right. Photo © 2013 Aaron Saunders

Aft of the staircase is the ship’s Reception Desk, which borders the entrance to the Mekong Restaurant, where all meals are served.

Lunch is a combination buffet and a menu that changes daily. Complimentary red and white wines are served, along with complimentary local beers. The buffets are always nice, but I personally prefer to order off the menu. The soups have been amazing, and nearly all are either Cambodian or Vietnamese-influenced. 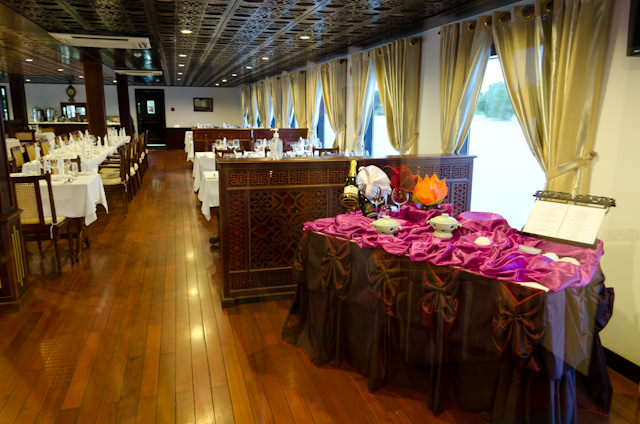 Dinner is a full three-course-plus-dessert affair that is both tasty and enjoyable. I’ve watched the crew repeatedly provisioning the ship at our various ports of call, and it is a matter of logistical brilliance that they are able to source the ingredients necessary to prepare such flavourful and high-quality meals onboard.

The only aspect I cannot comment on is the desserts. They look fantastic, but dessert for me is a cup of coffee and another glass of French wine! But I think it is worth noting that the meals are every bit as fresh and well-prepared as those served aboard AmaWaterways’ European-based vessels. 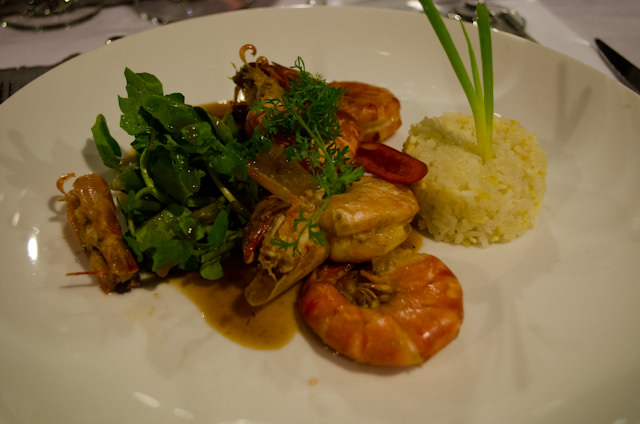 Cuisine offered onboard includes both American and Asian specialties (but get the Asian ones – they’re tremendous!). Photo © 2013 Aaron Saunders

The lowest passenger deck, Mekong Deck 0, is home to six Category C staterooms that measure 226 square feet. Because these are located at the ship’s waterline, these staterooms feature two fixed porthole windows located on the upper third of the wall instead of the French and step-out balconies found on nearly every other category. The biggest advantage to these rooms, however, is their very affordable price-point. 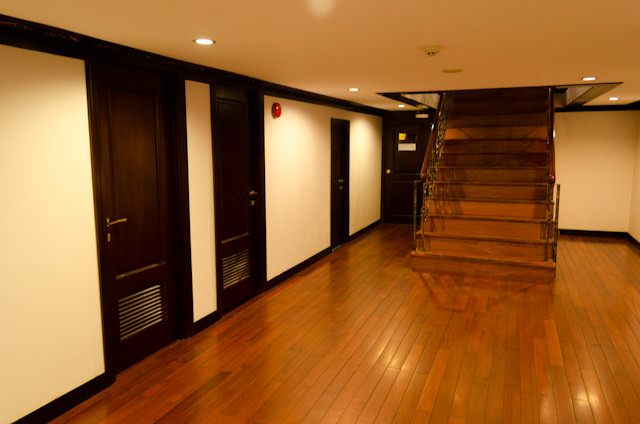 The stateroom corridor on Mekong Deck 0, facing aft towards the stairs up to the Reception Desk. Photo © 2013 Aaron Saunders

One public room is a bit of a mystery: the Panoramic Lounge on Saigon Deck 2, just forward of my stateroom. It looks like a small, cozy little lounge, but it doesn’t seem to serve any real purpose, and I have never seen anyone sitting in there. It does, however, provide some pretty cool access to the ship’s bow. 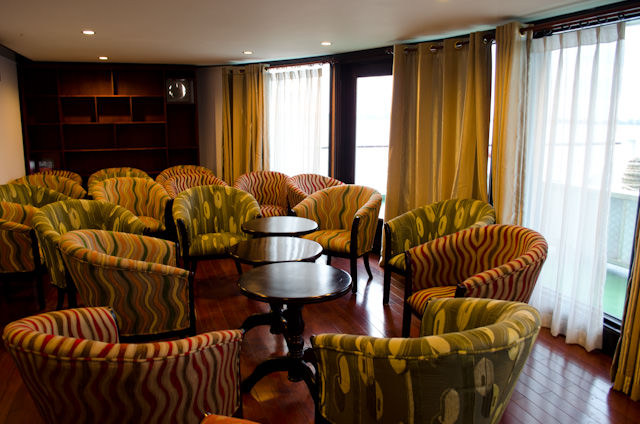 The Panoramic Lounge all the way forward on Deck 2 is a bit of an oddity, as it is never used. Photo © 2013 Aaron Saunders 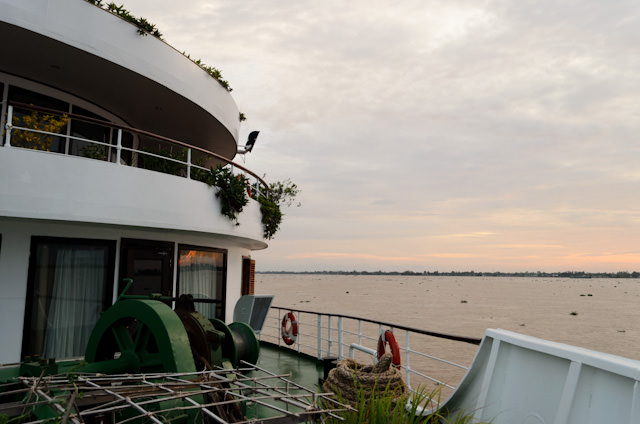 The ship’s bow can be accessed through the Panoramic Lounge on Deck 2. Photo © 2013 Aaron Saunders

There is, however, one thing missing from onboard the AmaLotus that many guests have been asking about: brochures. I’ve met so many guests today who have asked where else AmaWaterways sails to and whether there are brochures onboard. My Vietnam and Cambodia brochure has been passed around quite a bit today, and I am wishing I would have brought the full destination guide with me, if only to illustrate the multitude of destinations the line sails to, from Russia’s Volga to Portugal’s Douro to Africa’s Chobe River. (note: these appeared the very next day in the Saigon Lounge!) 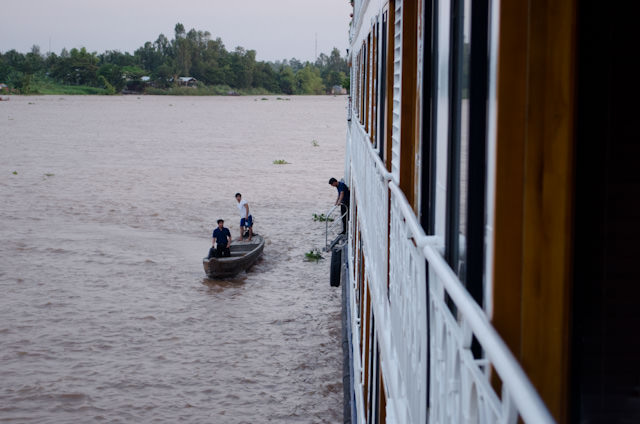 This afternoon, we traded Cambodia for Vietnam as we crossed the border, anchoring for a few hours offshore to complete our immigration formalities that were completely taken care of by the staff aboard AmaLotus.

All guests had to do was kick back and enjoy another strikingly beautiful sunset. 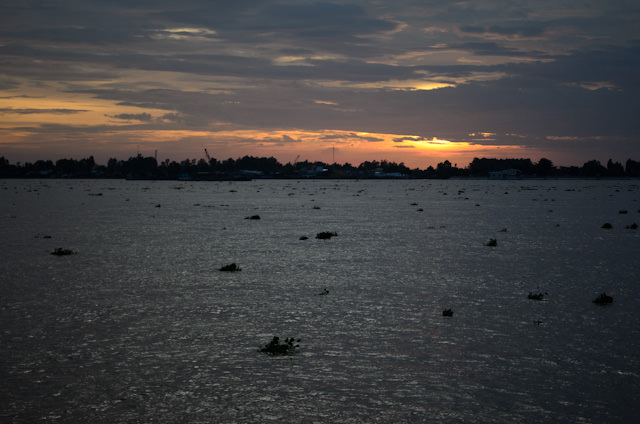 Our first sunset along the Mekong in Vietnam. Photo © 2013 Aaron Saunders