The Wednesday that Will be Tough to Top 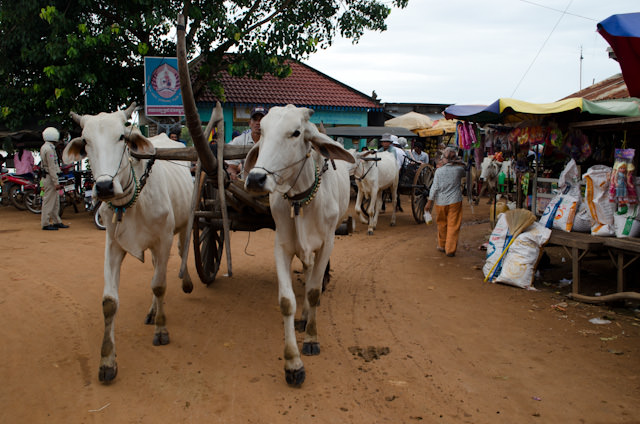 As I discovered today, the on-shore experiences that AmaWaterways has put together in Cambodia are unique, educational and enlightening. Photo © 2013 Aaron Saunders

Today, guests aboard AmaWaterways’ AmaLotus were invited to take a most fascinating journey by a traditional “Khmer Limousine” in Kampong Tralach, Cambodia. But this limo isn’t made by Lincoln or Mercedes. It’s two oxen pulling a wooden cart.

The scene on the ground was like something out of a historic movie: 60 carts being pulled by a total of 120 oxen had assembled at the foot of the dirt road that guests aboard the AmaLotus disembarked onto. The entire place was a crowded hub of activity, with carts jostling for position and local children running back and forth with flowers amid shouts of “Hello! Hello!” 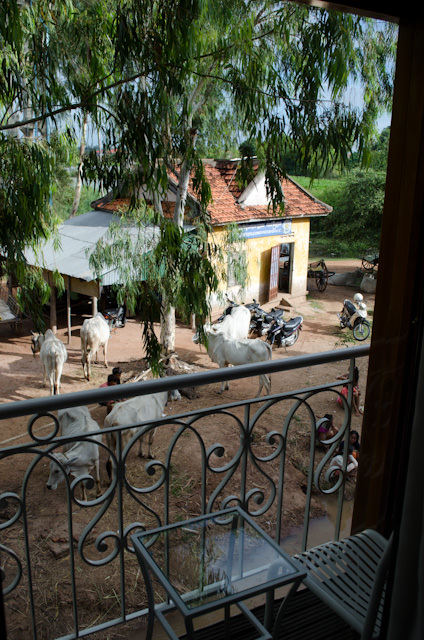 Kaampong Tralach, as viewed from my balcony. Photo © 2013 Aaron Saunders 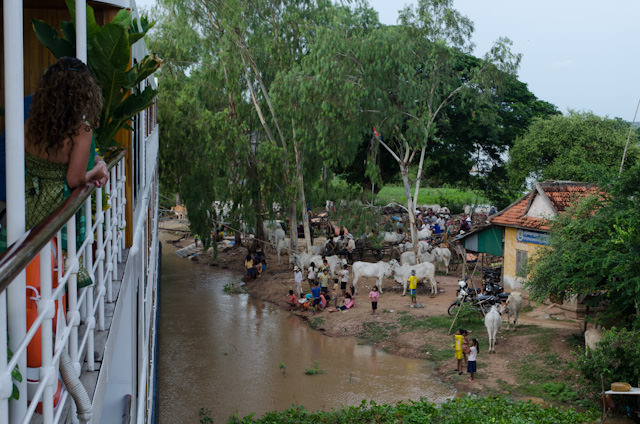 Guests onboard AmaLotus view the scene in Kampong Tralach, which was like stepping back in time two hundred years. Photo © 2013 Aaron Saunders

I grabbed a seat in the back of a wooden ox cart, facing backwards. Staring at the two oxen pulling the cart immediately behind me, it became apparent that these aren’t nature’s most attractive animals: their faces resemble a cross between that of a cow and a bull, and their skin hangs off their bones like a frail octogenarian. They also have a nasty penchant for defecating at any given moment. 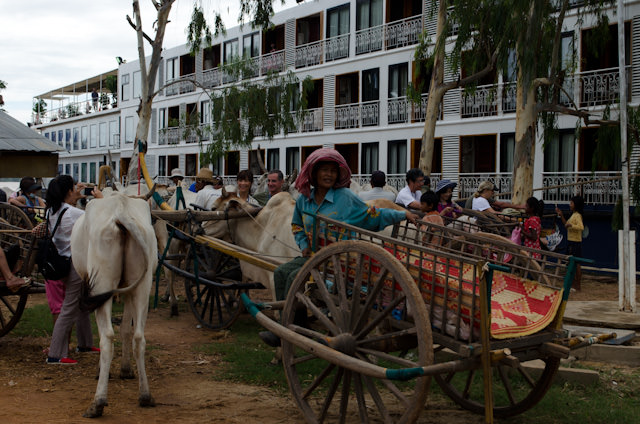 A total of 60 ox carts came alongside one by one in the early morning hours, pulled by 120 oxen. Photo © 2013 Aaron Saunders

And yet, it was an amazing experience to be whisked through town on the same kind of transportation that has been used here for centuries. And as we rode through town, it was immediately apparent that nearly every villager has an ox and a cart. A very select handful have small Honda motorcycles.

Our trip by Khmer Limousine took us throughout the village of Kampong Tralach for a 20-minute ride up to the beginning of Cambodia’s National Highway 5. From there, we boarded four separate motorcoaches – one for each group – for the 45 minute journey to the former capital of Cambodia, Oudong. 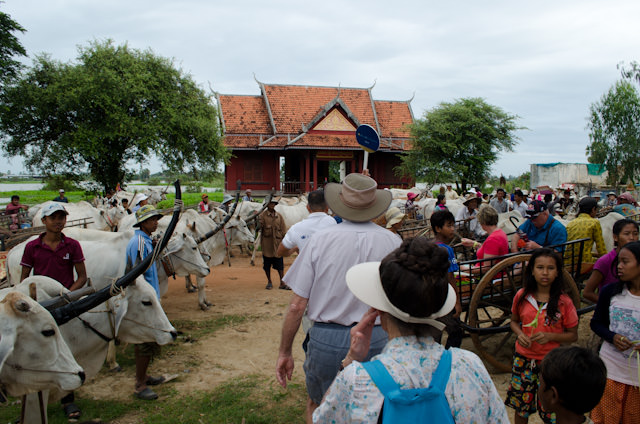 Our awesome Blue Group guide, Chantha, told of how one of the villagers asked why we were so excited to be taken by Ox Cart through the town. Chantha replied that we didn’t have this method of transportation in our own countries. The villager then replied that we must be “The French”, which stems from France’s strong historical presence here. Outsiders – particularly Caucasian ones – are almost always referred to as “The French.” 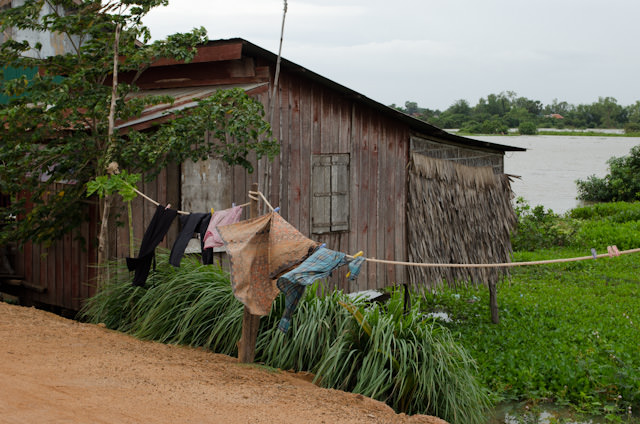 Oudong served as Cambodia’s capital from 1618 until 1865, when it returned to Phnom Penh. It used to be the site of dozens of important temples and royal stupas, but nearly all of these were destroyed in the 1970’s as part of air strikes against the Khmer Rouge fighters that were embedded here.

Today, Oudong is still home to the Vipassana Dhura Buddhist Meditation Center, which is the largest of its kind in Cambodia. It is a source of education and meditation for all Cambodian Buddhists, and we were fortunate enough to be able to tour the entire center and even receive a traditional Buddhist blessing. 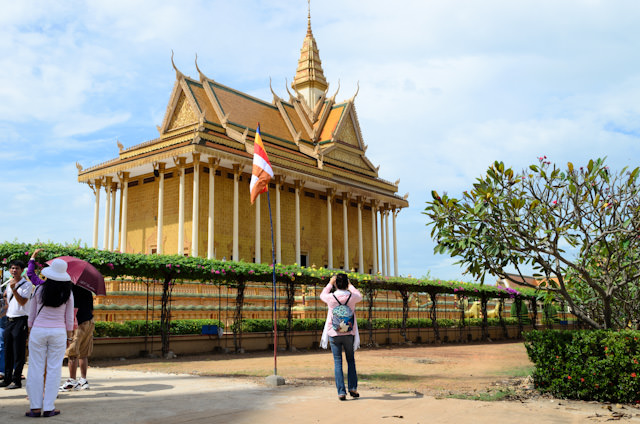 The spectacular Vipassana Dhura Buddhist Meditation Center in Oudong was our first stop after our trip by Khmer Limousine and motorcoach. Photo © 2013 Aaron Saunders

While receiving the blessing, we had to clasp our hands together, palms facing, at about chest height, and look straight ahead. The blessing itself took about 10 minutes, and I learned it’s quite challenging to hold your hands in that position for so long. It requires plenty of concentration, yet it is amazing how much it allowed my mind to clear during the process. I was rather surprised when, upon standing up again, I realized my left foot had fallen completely asleep without my noticing! 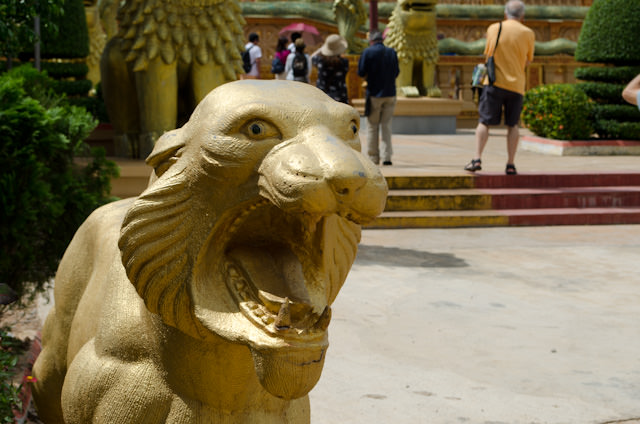 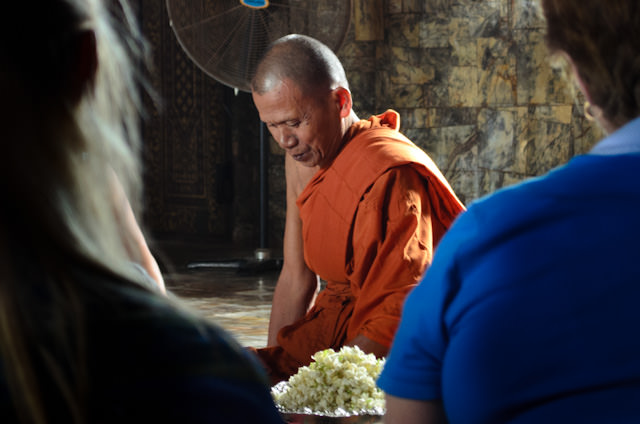 Monks bestowed a traditional Buddhist blessing on the guests of the AmaLotus – a truly unique experience! Photo © 2013 Aaron Saunders 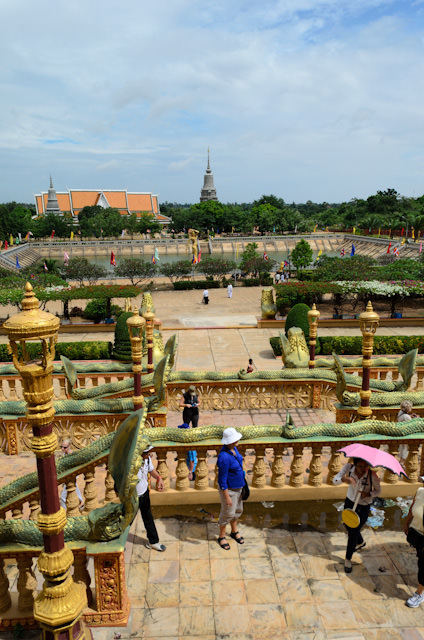 Looking back over the entire temple complex in Oudong from the Monastery. Photo © 2013 Aaron Saunders

Following our morning tour, we returned back to the AmaLotus for another delicious lunch. Like the best cruises, the meals served here are fantastically prepared, and the so-called “Action Station” off to the port side of the Mekong Restaurant typically serves up local specialties. It’s so popular that lines regularly back into the buffet portion that is set up, though I personally find I enjoy ordering off the menu that is available and changes daily. 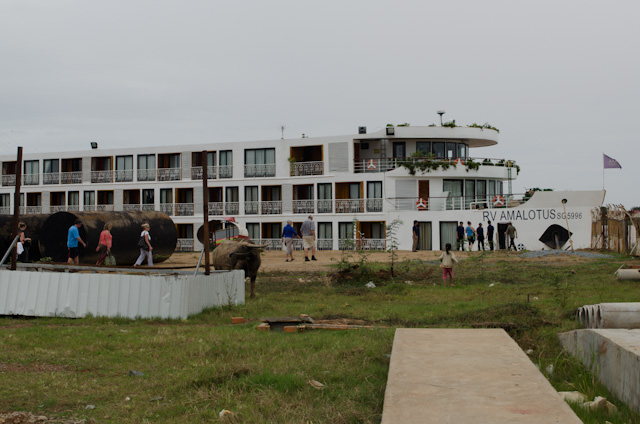 Heading back onboard the AmaLotus in Oudong. Unlike European river cruises, AmaWaterways has had to almost create infrastructure along the Mekong from scratch. But it’s docking locations like this that make the experience that much more authentic! Photo © 2013 Aaron Saunders

A look at the full Daily Program here onboard the AmaLotus for Wednesday, September 25, 2013: 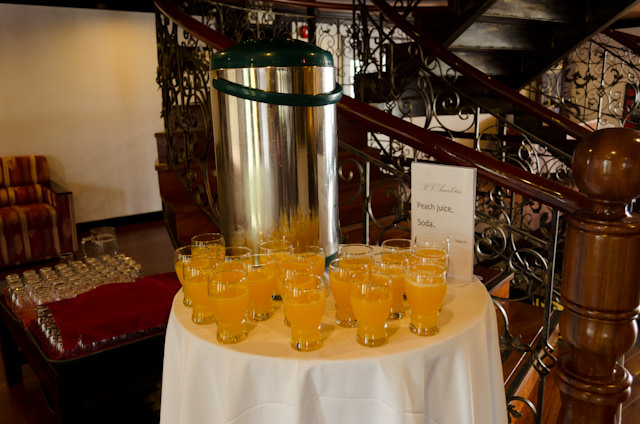 Cold towels and refreshing drinks (that change with each day) are offered every time guests come back onboard AmaLotus. Photo © 2013 Aaron Saunders

After lunch, we went ashore in the village of Koh Chen for an hour-long walking tour and a look at this town that is famous for its silver smiths. Once again, being able to simply walk around a town like this – that many would likely never discover on their own – has really made this itinerary extraordinary. 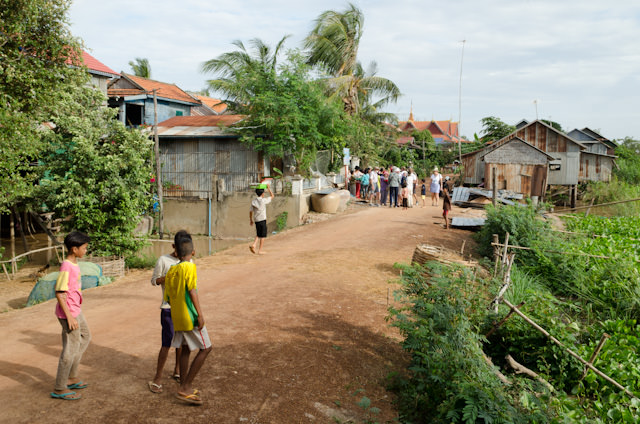 While I was writing this report as afternoon faded into dusk, I heard a commotion outside my room. I stepped out onto the full balcony (see how that comes in handy?) to see we were passing a Buddhist temple, and they were reciting a blessing. 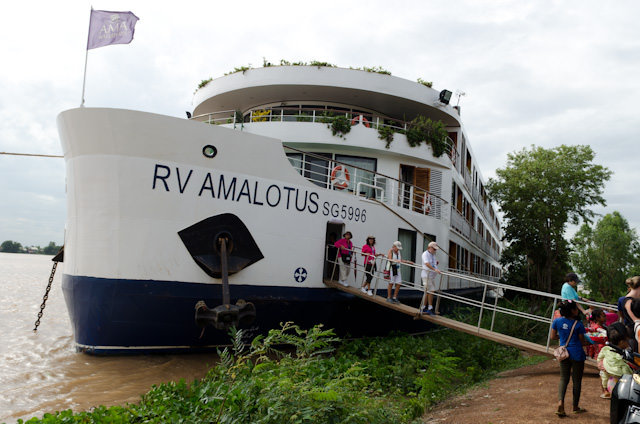 That gave way to several floating villages, all of which we passed anywhere from 100 to 20 feet offshore. Kids would run barefoot down dirt roads to catch a glimpse of us as the AmaLotus sailed past, each one shouting “Hello! Hello!” as we pressed on. Cars would honk their horns. People would set sail in their skiffs to get a better look. 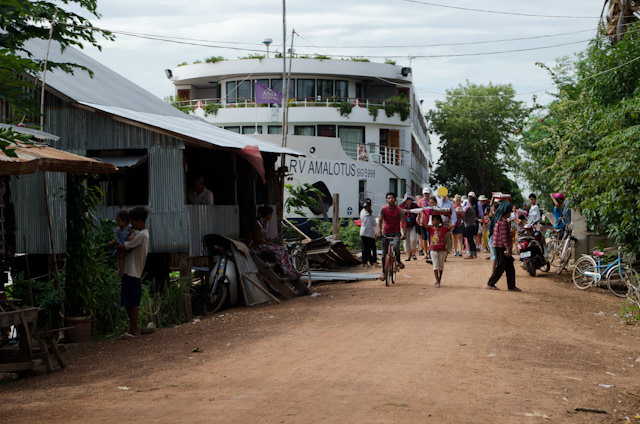 The arrival of the AmaLotus – which towered over Coh Chen – was an event for passengers and residents alike. Photo © 2013 Aaron Saunders

So I stood there, on my balcony, for nearly 90 minutes – doing nothing more than waving back to all the kids that were coming out in droves onto balconies, windows, roads, and floating docks to get a look at us as we sailed past. I wasn’t alone; the number of heads (and cameras) poking out of balcony openings suggested that most of my fellow guests were doing the same. 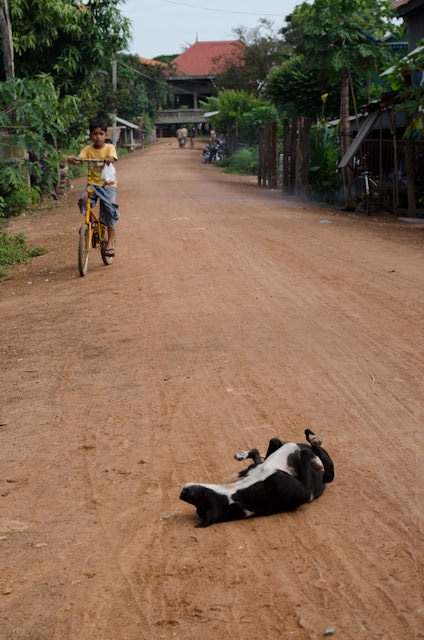 A dog rolls around in the middle of the road in Koh Chen. Photo © 2013 Aaron Saunders

AmaWaterways has always been dedicated to and passionate about their Vietnam and Cambodian itineraries. They were here offering river cruises before it became trendy – before everyone else figured out what they already knew. They sponsor a school here. They take their guests on culturally-enriching experiences. When I met AmaWaterways co-founders Rudi Schreiner and Kristin Karst this past June, they both spoke with wide-eyed enthusiasm about these voyages. 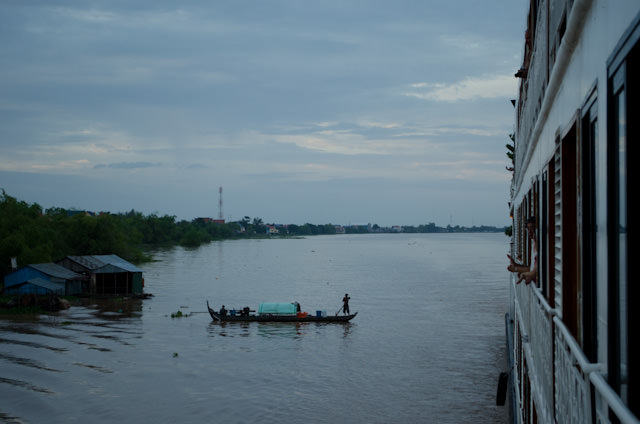 As we sailed for Phnom Penh, children ran along the banks of the river to wave at us, and boats took to the water. Photo © 2013 Aaron Saunders

They’re also consciously aware of the changing conditions of this region. Recently, Phnom Penh has been the site of several high-profile uprisings and protests, many of which have been violently quashed. So AmaWaterways re-jigged the schedule to keep the ship and her guests clear of any potential dangers. 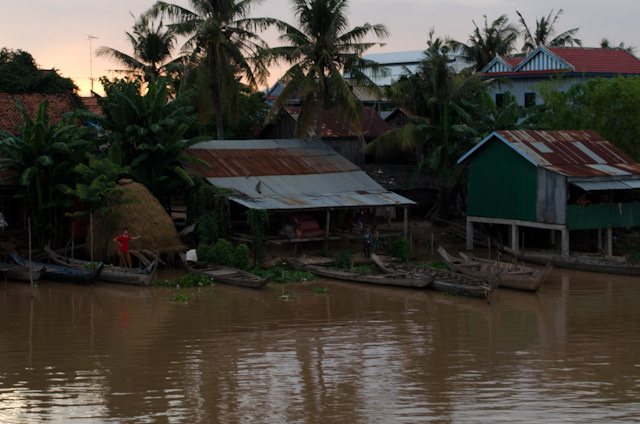 This evening, though, we received word during dinner that the local authorities had cleared AmaLotus to dock (as normally scheduled) in the heart of Phnom Penh, and invited guests to go ashore. So that’s just what I did, along with a small group of other guests that I’ve become good friends with. And I was not disappointed I did so; seeing Phnom Pehn at night was electrifying. Yes, there is a huge prostitution problem here. You’ll see it immediately, and it’s very obvious. But there are also scores of trendy bars and legitimate nightclubs, and I think it’s worth stressing that when our little party of three ended up accidentally strolling down these streets, we never felt threatened or unsafe. 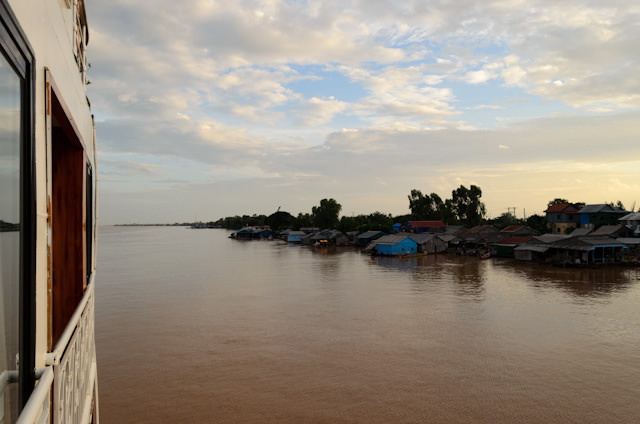 Sailing into the sunset aboard the AmaLotus. Photo © 2013 Aaron Saunders

Phnom Penh is also filled with friendly people. When our group became, let’s say, unsure of where we were (and, frankly, a little leery of wandering into an escort bar), a shopkeeper had his American-born Cambodian daughter give us directions. Not only that, she personally walked us two blocks to where we were headed to ensure we went the right way, then joined us for drinks. She grew up in Oregon, lived in California, and returned to Phnom Penh five years ago to help her father run his business.

Two hours and one Angkor Beer on the ground in Phnom Penh was a great way to spend an evening, and it’s nice that AmaWaterways is continually seeking to adjust the itinerary to provide their guests with the ultimate Mekong experience.

Tomorrow, we set off in Phnom Penh for a tour of the Royal Palace and an afternoon excursion to the infamous Killing Fields and S21 Detention Center. It will no doubt be a difficult day, but as one guest remarked today, “it seems to get better every day.” 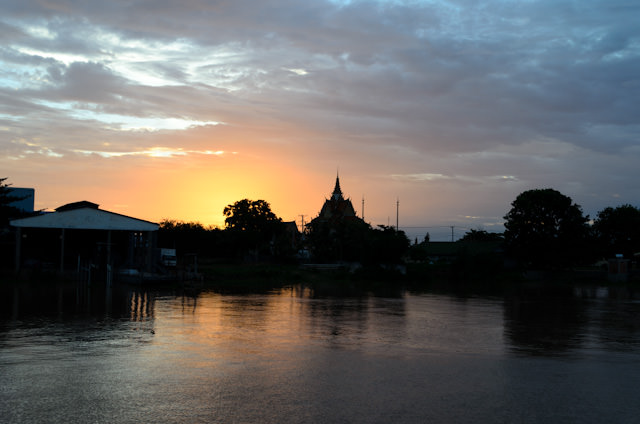