Glimpses of Kampong Chhnang and Cambodia 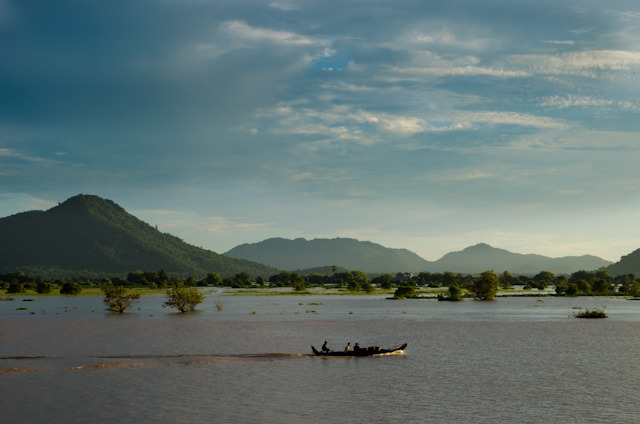 Day breaks in Cambodia, as seen from the decks of AmaWaterways’ AmaLotus. Photo © 2013 Aaron Saunders

This morning, I awoke at 5:30 am aboard AmaWaterways’ AmaLotus, surrounded by the splendour of Tonle Sap Lake. I was up early for two reasons: I wanted to photograph the ship before most of the other guests awoke, and I wanted to try to connect to the Wi-Fi in the Saigon Lounge to try to post yesterday’s report. 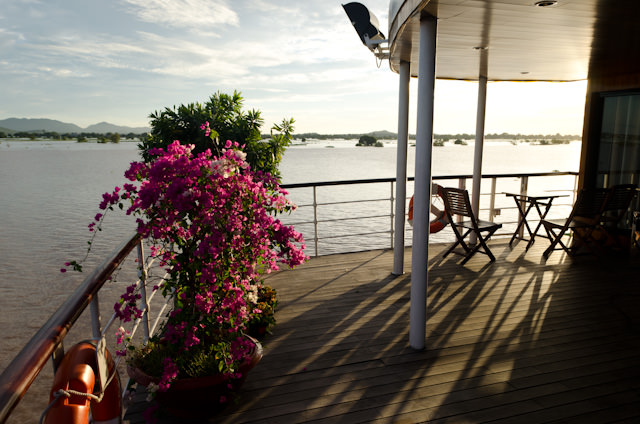 Aft of the Saigon Lounge on Deck 2, this attractive little deck space is the perfect place to watch the sun rise with a cup of coffee. Photo © 2013 Aaron Saunders

After about 40 minutes wrestling with the shipboard internet, I gave up and sat back in my emerald green lounge chair. I went and grabbed a cup of coffee (continental breakfast is available from 6:30am on in the Saigon Lounge for early risers), and I just sat there and watched the scenery around me. 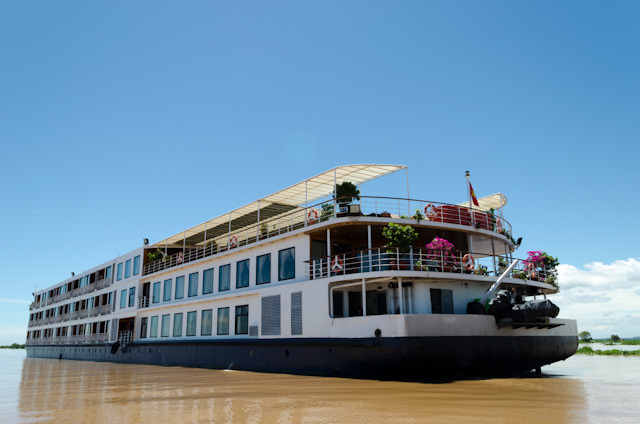 The 2011-built AmaLotus, as seen from the small local boats that took us on our morning excursion to Kampong Chhnang, Cambodia. Photo © 2013 Aaron Saunders

The vast emptiness of Tonle Sap Lake has been replaced with rolling mountains on either side of us, accented by small islands of trees that seemingly grow straight out of the water. There’s an odd feeling of inertia when you look out the windows; despite still being at anchor as I write this, small “bushes” drift past the ship, giving the mistaken appearance of being underway.

Few words, however, can describe how beautiful this area of the world is. It’s exotic, to be sure. Remote, yes. But it is a world apart from everything else. 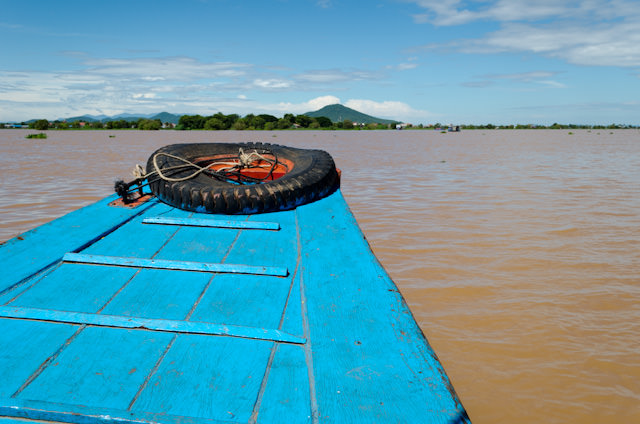 At 9:30am this morning, guests disembarked AmaLotus for an excursion to Kampong Chhnang by local motorboats, followed by a walking tour of the town. Like yesterday, guests were divided into several small, colour-coded groups. I’m part of the Blue Group, and our excellent guide, Chantha, did a fantastic job of guiding us around. He’s a native Cambodian who suffered greatly at the hands of the Khmer Rouge; when all was said and done, he’d returned to Cambodia to find he only had a single family relation left alive on his father’s side: an uncle. 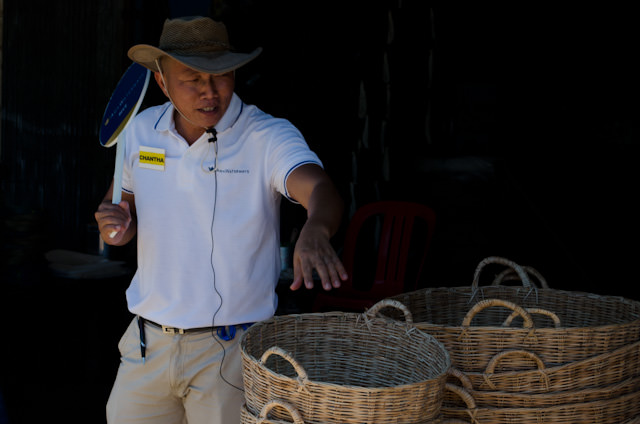 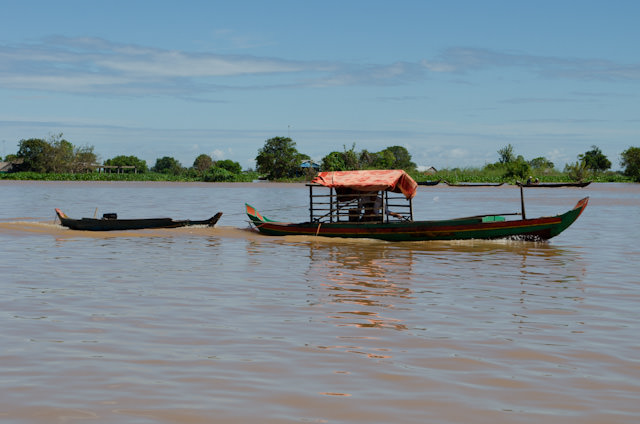 Kampong Chhnang province is home to roughly 538,000 inhabitants, or nearly four percent of the total population of Cambodia. Almost everyone here is either a farmer or a fisherman, and those who are not are typically government officials. Of course, during our visit to the port city of the same name, it’s easy to determine that most people here fish for a living.

Our local covered motorboat excursion whisked us along the Tonle Sap River towards Kampong Chhnang, with vessels of all shapes and sizes (and seaworthiness) passing us in every direction.

And nearly everyone would smile and wave. 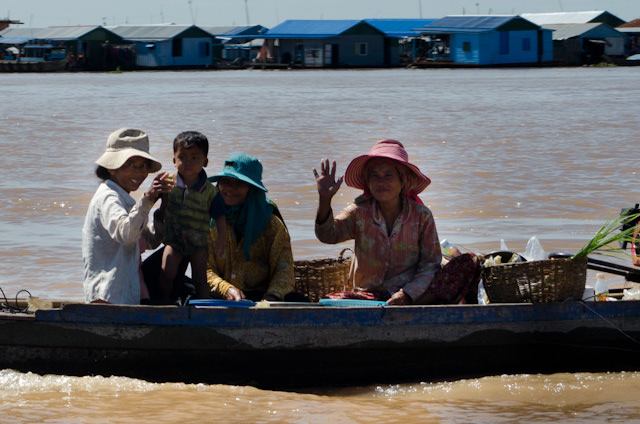 Nearly everyone we passed along our way into Kampong Chhnang – and beyond – would wave at us and say “Hello!” Photo © 2013 Aaron Saunders

From people in boats to children standing on the base of their floating houses, these gestures were almost inescapable. After waving to nearly every passing boat and house, I began to wonder when the last time was that I waved at someone before realizing it was months ago.

As we passed along the floating villages that lined our path, we saw kids running and jumping off of docks to go swimming in the water. Fisherman were gathered around the catch of the day – which could be smelled before being seen – and people swung back and forth in hammocks tied to posts. 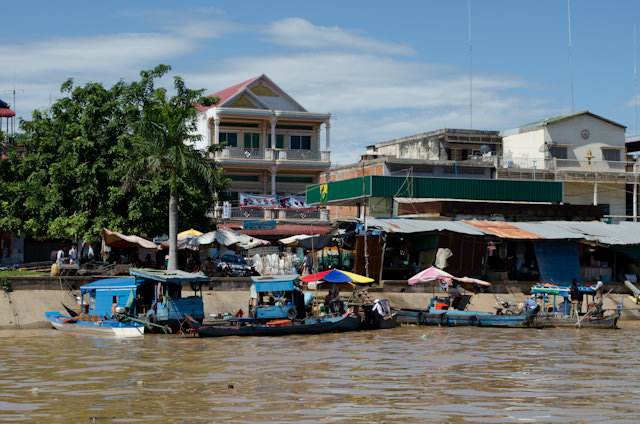 When we arrived at the crowded pier we were to disembark our motorized boats at, dozens of kids – perhaps no older than five or six years – greeted us, happily waving and saying, “Good Morning! Good Morning! How are you?” 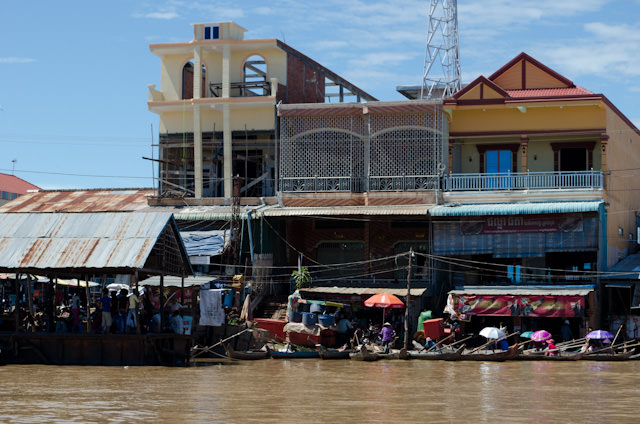 Coming Ashore! We disembarked our skiffs on the pier located on the left of the photo. But don’t judge the town based on its appearance. Photo © 2013 Aaron Saunders

They’re excited to practice their English language skills (which are flawless and far better than my Cambodian), and you get the impression that seeing tourists from another country is still a very big deal here.

Now, here’s my own guilty admission: seeing a dozen kids run down a pier made me put my hand on my wallet. It’s an awful thing to say, but I’ve been to places like Barcelona and Paris, where a group of kids can be an excellent diversion for pickpockets. 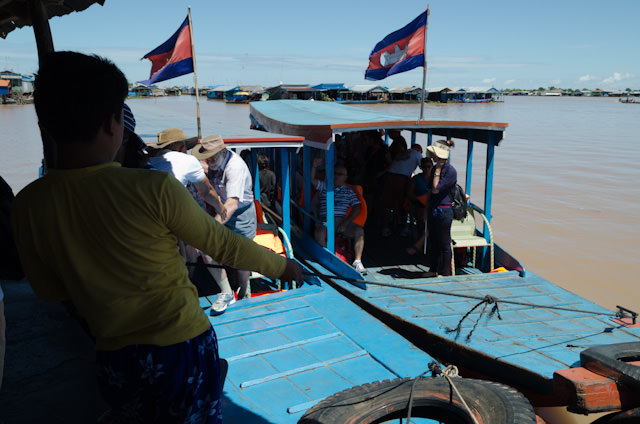 Passengers from the AmaLotus prepare to disembark our local skiffs. Photo © 2013 Aaron Saunders

There’s none of that here. These kids are genuinely just kids excited to see new people.

I know you’ll look at these photos and see that the village looks rather ramshackle – run-down, even. But I want to emphasise how deceiving looks can be; at no time did I ever feel unsafe. At no time did I ever feel unwelcome here. And, look closer: people here may be poor, but they’re far from sheltered. Satellite dishes line the roofs of many floating houses and cell phones are prevalent. There’s even a guy with a laptop who will acquire – I am not sure how – the latest MP3 songs for your iPod.

He sits next to four blacksmiths, plying their trade exactly as you would have seen two hundred years ago. 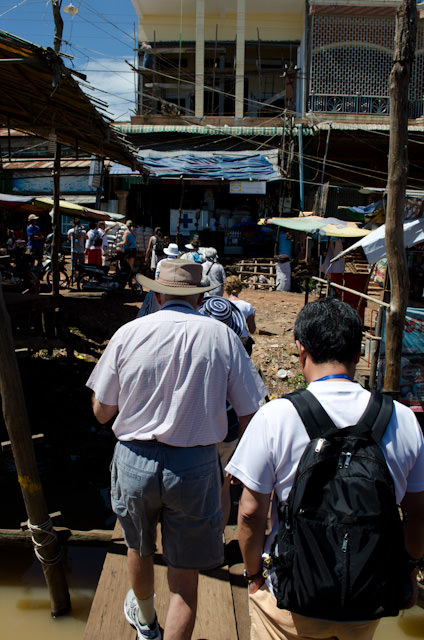 Our walking tour through Kampong Chhnang took us through the town’s busy marketplace. Photo © 2013 Aaron Saunders 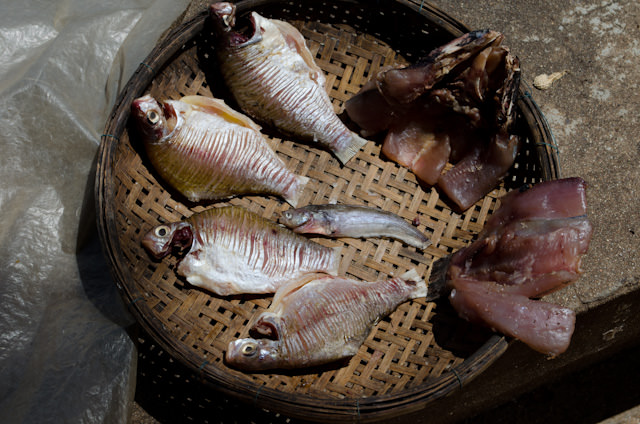 I can’t emphasise strongly enough how exhilarating this two-hour excursion through Kampong Chhnang was. I was hot. I was sweating profusely. Yet this is precisely what I want to have when I travel: an experience that cannot be duplicated anywhere else in the world.

These Mekong trips are part of what AmaWaterways calls their “AmaVoyages”: river cruises through some of the most diverse parts of the world. Designed for the adventurous traveller, these trips and itineraries require a bit more flexibility and understanding than your average European-based river cruise, simply because the infrastructure may not always be present, particularly in developing countries like Cambodia. 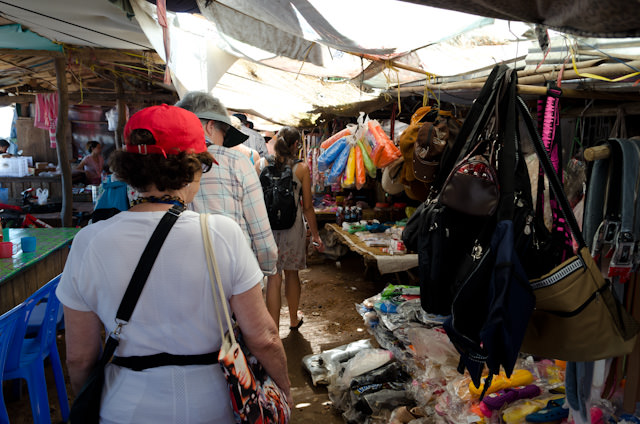 The Kampong Chhnang market may look small, but nearly everything you could want – food or otherwise – can be found here. Photo © 2013 Aaron Saunders 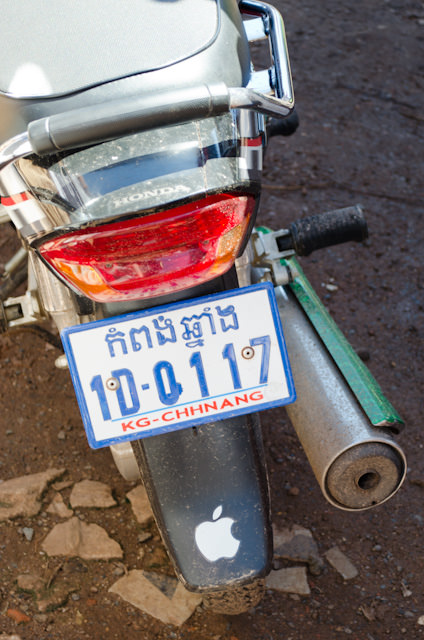 Not everything is rural in Kampong Chhnang. Photo © 2013 Aaron Saunders

In addition to their Mekong itineraries, the line offers sailings along Russia’s famous Volga aboard AmaKatarina and cruise tour combinations that explore the best of South Africa aboard the Zambezi Queen.

They also draw people who may not ordinarily be attracted to either cruising or river cruising. While the demographic of the AmaLotus is primarily American on my voyage, there’s a healthy dose of Canadians, Australians, Chinese, and a handful of Japanese tourists who have come to see this striking part of Southeast Asia. 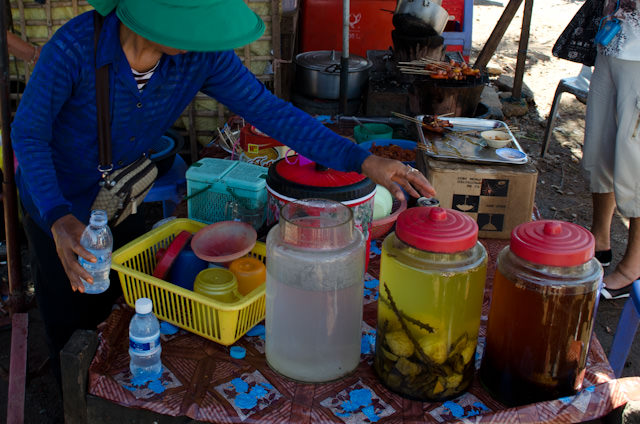 Of course, I am a huge supporter of cruising – obviously. But the truly advantageous nature of a cruise really hit home on my excursion this morning. After all, how else would I have seen this village? Aboard the AmaLotus, I only have to unpack once. The atmosphere onboard is friendly, and all the details have been taken care of for guests, including affording them some amazing experiences ashore that, frankly, would be difficult to duplicate otherwise. 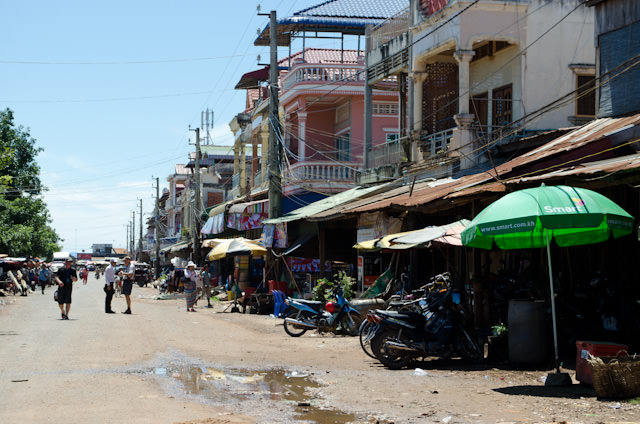 This afternoon, I sat in the Saigon Lounge while the numerous villages along the Tonle Sap River slipped silently past us. Motorized skiffs would punctuate the stillness of the air as they zipped around us at all angles, and houses perched impossibly high on stilts to deal with the massive water fluctuations on the Tonle rose in the distance and then fell astern. 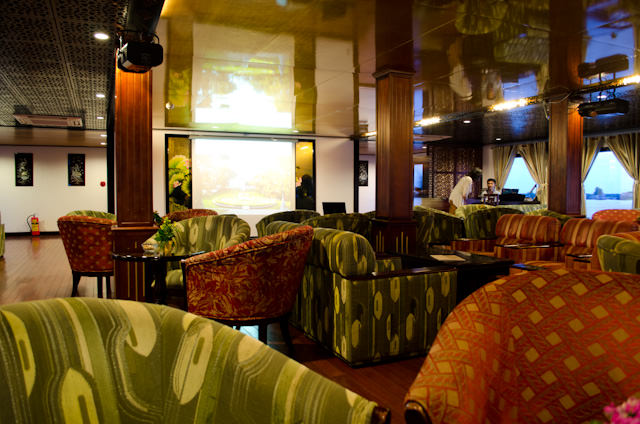 The inviting Saigon Lounge is the main social hub aboard the AmaLotus. This photo was taken facing the forward, starboard-side of the lounge. Photo © 2013 Aaron Saunders

While we glide along at eight or ten knots, a marvel of modern engineering, many of the locals outside still row their skiffs under their own power, just as they have for centuries.

As this was all going on, I sipped on local Cambodian beer – included in the cruise fare. When I first planned this trip, I was concerned I wouldn’t be able to try any local specialties due to my allergy to nuts, but thanks to the staff here onboard AmaLotus, I have been able to sample numerous local dishes, including traditional Vietnamese pancakes topped with vegetables and Cambodian beef soup. 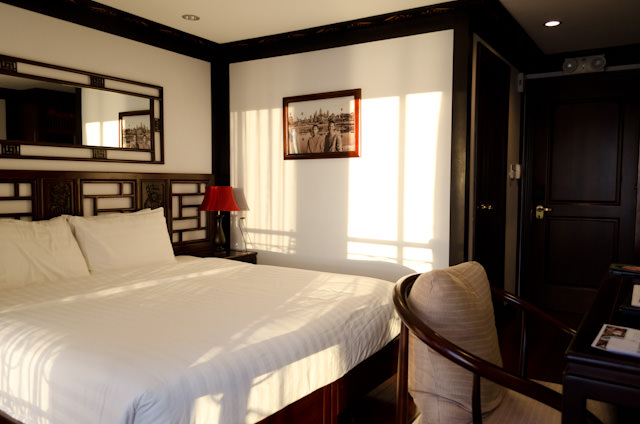 My relaxing Category A stateroom on Deck 2, seen near sunste. Photo © 2013 Aaron Saunders

This is also a great time to mention one of my favorite crewmembers: a gentleman named Tin Tin, who works in the Saigon Lounge. He’s proudly Cambodian, and in addition to serving up a great pint, he also talks to the guests about Cambodia and some of the issues it faces now. I doubt many North Americans could speak as eloquently about their respective countries as he speaks about Cambodia. 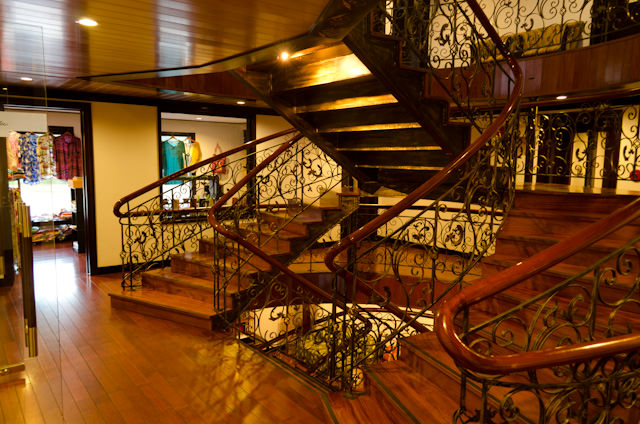 But the thing I will remember most about today was the skiff filled with children that came alongside us as we tied up at our anchorage in Kampong Tralach tonight. They were yelling, “Hello! How are you?” towards the burning lights of the AmaLotus, waving frenetically at every guest that came out to the open decks to wave back. 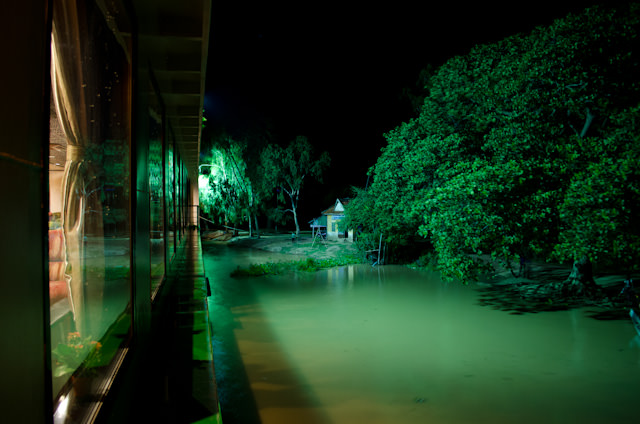 Our night anchorage at Kampong Tralach, Cambodia. Kids were still out splashing and playing by the ship, even at 10pm. Photo © 2013 Aaron Saunders

They say Cambodia is an emerging country, the politically-correct term for a “third world” locale. We, the western world, believe that they should emulate us. And in some respects, they should. But I think that we, the West, could learn something from the Cambodians about how to treat one another.

I hope Cambodia manages to outrun their troubled past. But I hope they never change their heart. 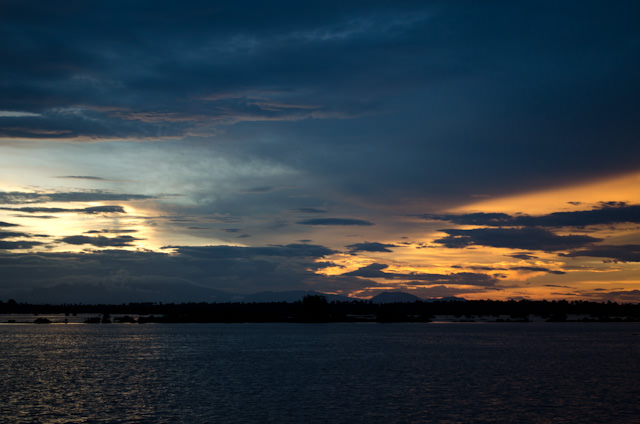