A Journey of 7,279 miles begins with a single step…or three flights. 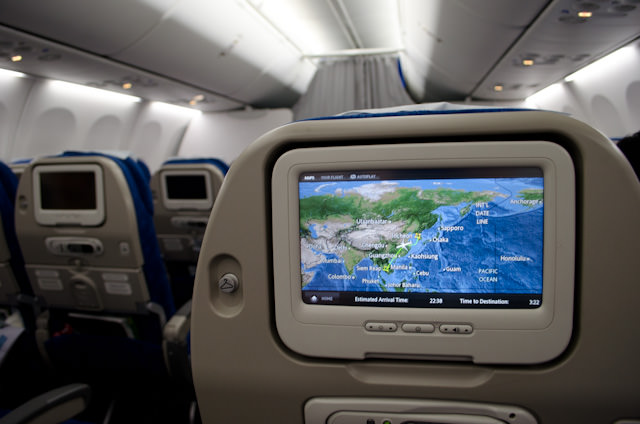 I love flying – and you have to in order to complete the journey I just made to fCambodia to embark AmaWaterways’ AmaLotus.

From Vancouver, I made the 50-minute flight down to Seattle Tacoma International Airport aboard an Alaska Airlines Bombardier Q400 turbo-prop plane in order to catch Korean Air Flight 20 to Seoul’s Incheon Airport in South Korea. My flight arrived at the North Satellite Terminal, and connecting to the South Satellite Terminal in order to make my connection required a somewhat circuitous route involving three separate “people mover” trains. 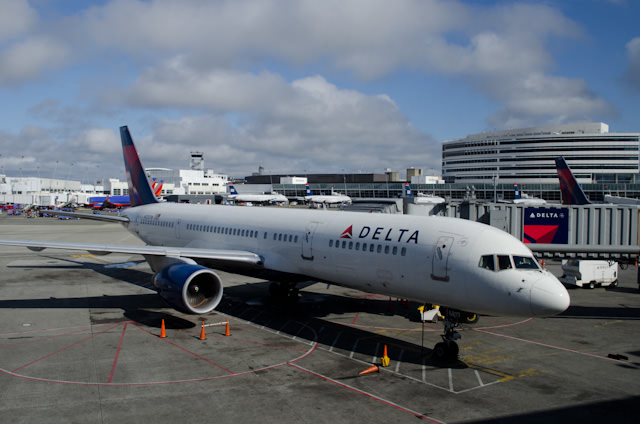 First leg of the trip: Vancouver to Seattle’s Tacoma International Airport, pictured above. Delta was having a particularly bad day with Super Typhoon Usagi axing flights to Hong Kong and one to Tokyo. Photo © 2013 Aaron Saunders

After 90 minutes at Incheon – which is one of the most beautiful and efficient airports I have ever been to – I boarded Korean Air Flight 687 from Seoul to Siem Reap, Cambodia. I also traded the comfortable Boeing 777-200ER that brought me to Korea for a much smaller Boeing 737-800. I really wasn’t looking forward to being crammed into a narrow-body jet for over five hours – until I got onboard and realized two things. One, the flight was half-empty. Two, the 737 was equipped with Boeing’s new “Sky Interior” that offers LED mood-lighting and far better overhead luggage bins.

And that’s just the aircraft. If you’re used to flying U.S.-based airlines, you’ll think you’ve died and gone to heaven aboard Korean Air. There’s more than decent entertainment onboard, with a whole Video-On-Demand (VOD) system that offers numerous movies and television shows in English as well as Korean, Japanese, German and French. On my flights today, I was able to enjoy The Great Gatsby, The Call, Disconnected, and even one of my favorite “classics”, Fargo. 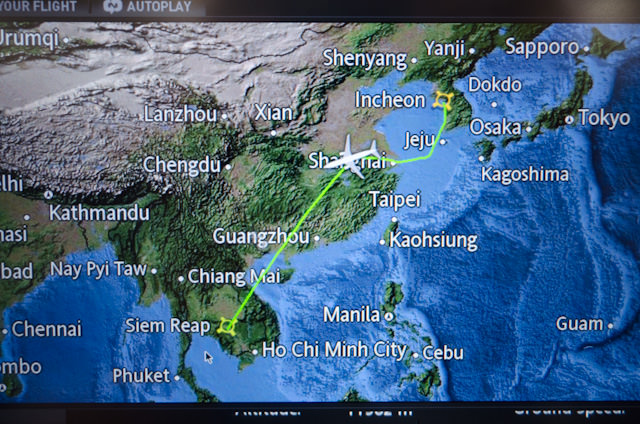 On my long-haul flight, there were four different choices of meals to be enjoyed, and another three choices (chicken, beef, fish) on the journey to Siem Reap.

Seating is comfortable, and seat pitch – the amount of space between you and the seat in front of you – is downright generous at between 33 and 34 inches; the most I’ve seen on any jet in a long time. Plus, there’s also a crew of highly-trained Korean flight attendants that actually care whether you’re having a good flight or not. On my long-haul flight to Seoul, they addressed the cabin by bowing respectfully at the start of the flight, and were never seen without a smile. 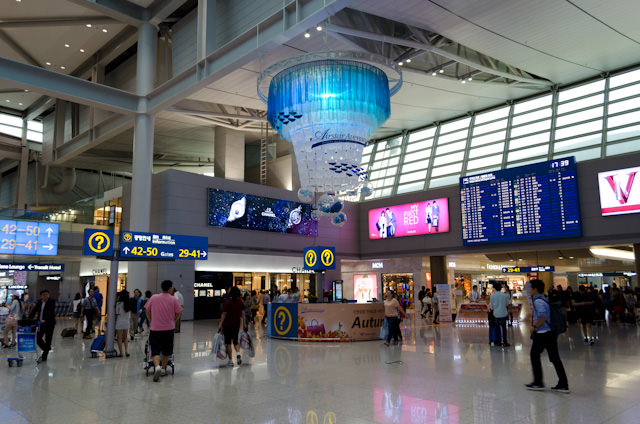 So the flights were immensely enjoyable – and that’s a good thing, because I spent a total of 17.5 hours in the air flying and another six hours on the ground in Seattle and Seoul in-transit. Total time from start to finish: a whopping 23.5 hours!

I often tell people that flying is a lot like taking driving lessons: everyone wants to get out on the freeway, but you have to complete the test course first. Flying from North America to Cambodia is definitely for experienced flyers. It’s not that it’s particularly hard, but you have to be able to tolerate several long-haul flights and have enough confidence in your abilities to make connections efficiently. Those with short-haul flight experience only (say, Miami to New York and back) might find the journey overwhelming. 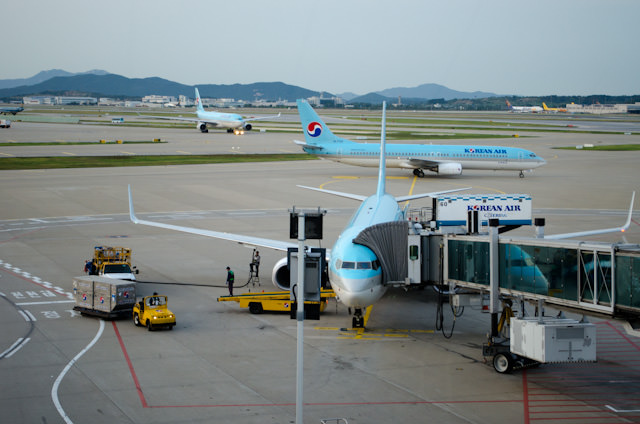 My flight to Siem Reap touched down at 10:40pm, and I emerged into the tropical warmth and walked across the tarmac to an airport that isn’t so dissimilar to Bridgetown’s Grantley Adams International. You disembark your plane via air stairs, then walk across the tarmac to the main customs and immigration building. 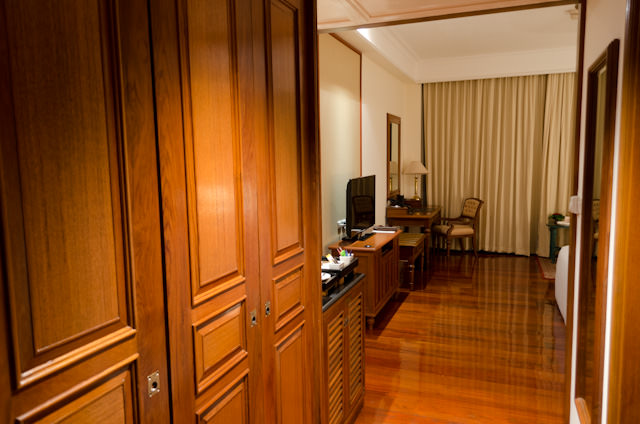 Welcome Home! At least, for a night: my room at the Sofitel Angkor in Siem Reap. Photo © 2013 Aaron Saunders

I acquired my Cambodian tourist visa upon arrival at Siem Reap airport, a process that proved to be efficient and effortless. All you have to do is fill out the appropriate forms – all distributed on the airplane – and go up to the counter with your passport, a 4×6 passport style photograph, and USD $20 in-hand. Your passport is then taken through a small assembly line of officials who place the visa and your departure form in your passport, stamp it, and hand it back. 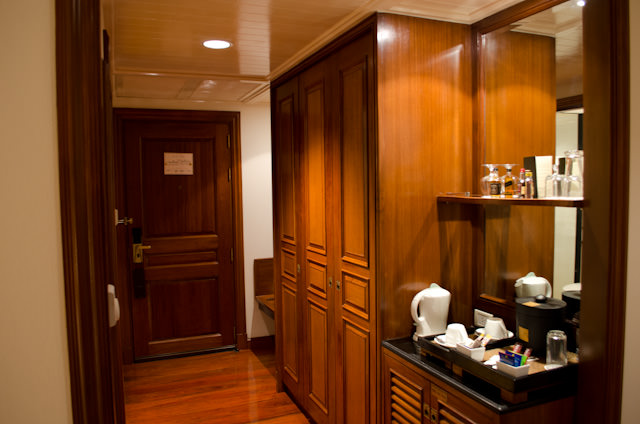 Everything in the room is done in traditional wooden accents – and the resort is so large, a map is provided. Photo © 2013 Aaron Saunders

This is also a good time to mention I don’t sleep well – if at all – on airplanes, so I am not the sharpest tool in the shed at the moment. But I wanted to share some photos of the journey, and of the beautiful Sofitel Angkor here in Siem Reap with you as I prepare for my journey to embark the AmaLotus tomorrow at her berth on Tonle Sap Lake! 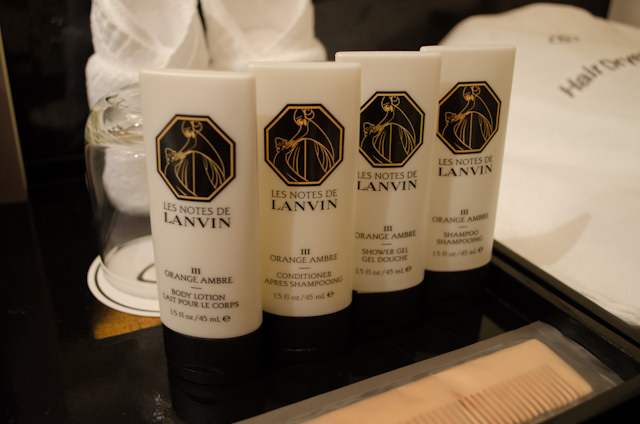 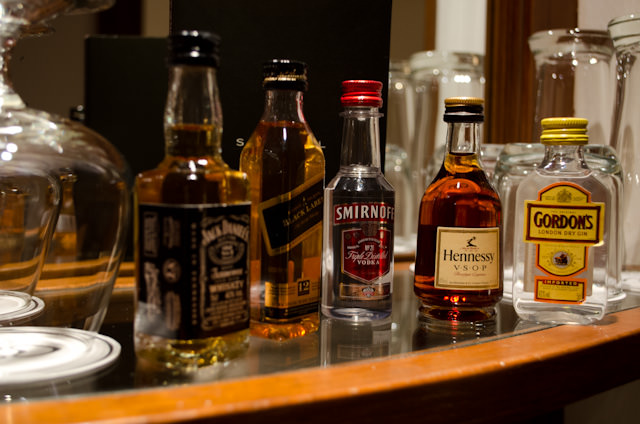 In Cambodia, you have to be careful to only drink bottled or purified water. Of course, there are other options, too. Photo © 2013 Aaron Saunders 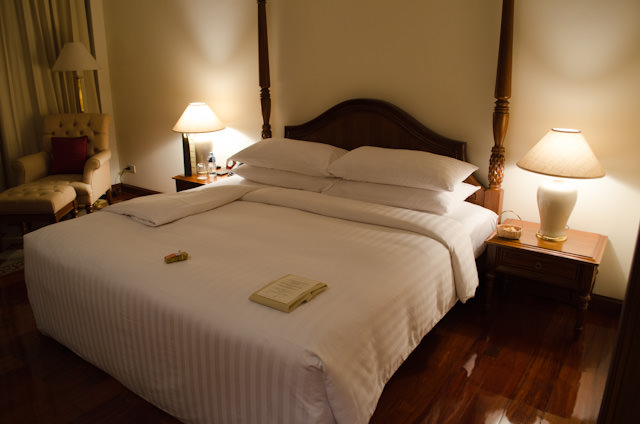