Built in 1999, Viking Sky sails the Tulips & Windmills, Grand European Tour, Rhine Getaway and Cities of Light voyages for Viking River Cruises.  Traveling along some of the most spectacular waterways in Europe, Viking Sky carries 150 passengers in 75 all-deluxe staterooms.  Built specifically for longer itineraries, these ships feature complimentary ship-wide wireless internet access in addition to a passenger elevator – a rarity among many river cruise vessels. 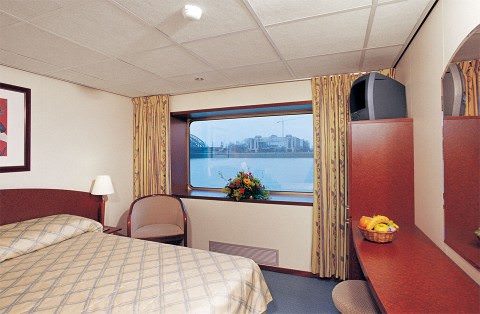 Full-size picture windows are featured in most staterooms aboard Viking Sky and her sister, Viking Danube. Photo courtesy of Viking River Cruises.

There are five stateroom categories aboard Viking Sky: 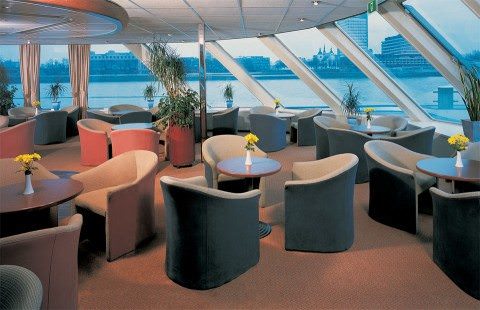 The beautiful lounges aboard Viking Sky and Viking Danube allow passengers to take in the spectacular scenery in comfort. Photo courtesy of Viking River Cruises.

Aboard Viking Sky, guests have a multitude of options vying for their attention.  The Restaurant on Middle Deck serves up all daily meals in a relaxed, yet elegant open-seating arrangement.  A full breakfast buffet is on offer, and the panoramic windows on each side of the dining room ensure the passing scenery is never missed.

A forward-facing Observation Lounge is located on Upper Deck and offers a variety of tables, couches and chairs in which to pass the time with friends.  A full bar serves this area.  Heading aft is the Reception area and onboard boutique.  Further aft is the ship’s Library which holds 100 different books in various languages as well as games like chess, backgammon and cards.

The ship even boasts a mini-spa all the way aft on Upper Deck, and features a whirlpool, tanning bed, and sauna.