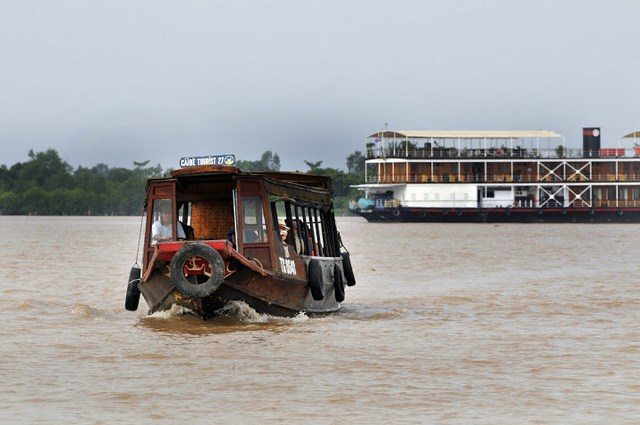 While Pandaw Cruises offers itineraries that range from seven to 20 nights, it is the Mekong Exploration voyage from Saigon to Angkor that remains the crown jewel of Pandaw’s full sailing schedule.

If you’ve never entertained the thought of sailing the Mekong before, here’s a look at what you can expect to experience each day:

This voyage begins with registration in the morning at the Renaissance Riverside Hotel in Saigon, followed by a transfer to the Delta Port of My Tho by coach. Arrive at around 11 AM for check in, followed by port and immigration formalities, then embark on your Pandaw river cruise ship. At lunch the voyage begins with a sail upstream, followed by afternoon moorage near Cai Be. Afternoon shore excursion: a fascinating trip via a traditional junk ship to explore the evergreen islands and the former Imperial residence, the An Kiet House. The ship will overnight at anchorage mid-stream near Cai Be. 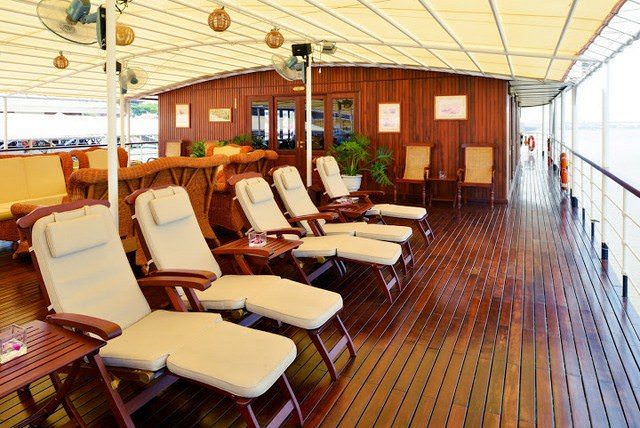 Scenic cruising at its most relaxed. Photo courtesy of Pandaw Cruises.

In the morning, set sail on a junk trip around Cai Be to see one of the spectacular floating markets, and go ashore to visit the French Gothic Cathedral. You can also explore the colorful port area with its numerous colonial buildings, delightful flower gardens and local rice paper manufacturers. Following that, return to the ship and cruise to Vinh Long to visit a Bonsai Garden and fruit farm, followed by a visit to a cultural visit to a brick and pottery factory. Return to the ship and cruise past Vinh Long City and the Evergreen Islands. The remainder of the day is spent leisurely cruising through the bustling Mekong Delta. 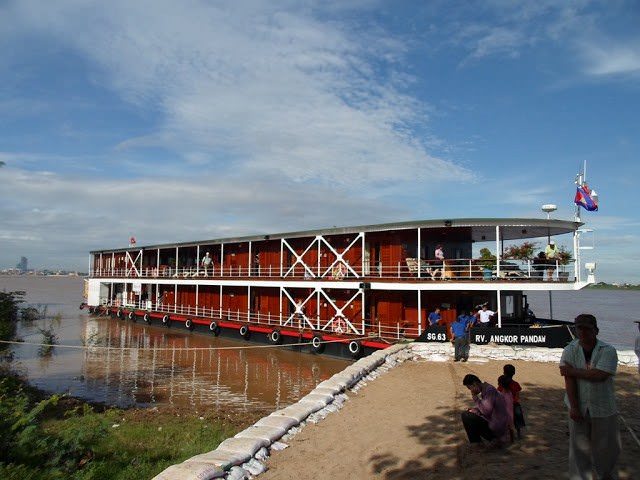 Watching the Angkor Pandaw come alongside on her journey down the Mekong. Photo courtesy of Pandaw.

From the Mekong Channel at Tan Chau, start your day by traveling down the canals and backwaters by local ferry boat. At Chau Doc, transfer to small boats to visit a Cham tribal village and cat fish farm. Then, experience a trishaw ride round this fascinating town of fine French Colonial buildings and experience its bustling marketplace. Return to the ship by boat for lunch and cast off for the Cambodian border. As evening falls, cruise up the broad Mekong channel. Later, moor overnight downstream from Phnom Penh and spend a relaxing evening onboard your ship.

The capital of Cambodia retains the French charm that has been wooing travelers from around the world. The city has several impressive wats, or monasteries, including Wat, Ounalom, Wat Phnom and Wat Lang Ka. Equally stunning are the Royal Palace and the Silver Pagoda, one of the few places in Cambodia where artifacts embodying the rich Khmer culture were preserved by the Khmer Rouge.

In the afternoon, an excursion transports you to the Killing Fields and the grim Khmer Rouge detention center known as Tuol Sleng, or S21. On a brighter note, you may wish to spend the evening enjoying some of Phnom Penh’s legendary night life. Don’t miss the chance to have a drink at the Foreign Correspondents’ Club. 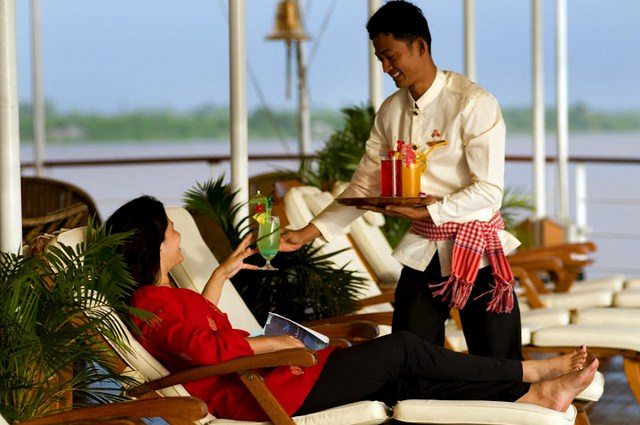 When sailing between ports of call, relax and enjoy the service onboard. Photo courtesy of Pandaw.

An early morning departure from Phnom Penh takes you on a journey where you’ll join a walking tour of the little-known silk weaving village of Chong Koh. Later, cruise past the Mekong’s timeless villages and abundant river life; an enormous draw for the region’s extensive fishing activities. In the afternoon, stop at Peam Chi Kang village to visit the wat — home to the village’s decorative racing boats — and a school. Explore this peaceful and friendly community at your leisure. 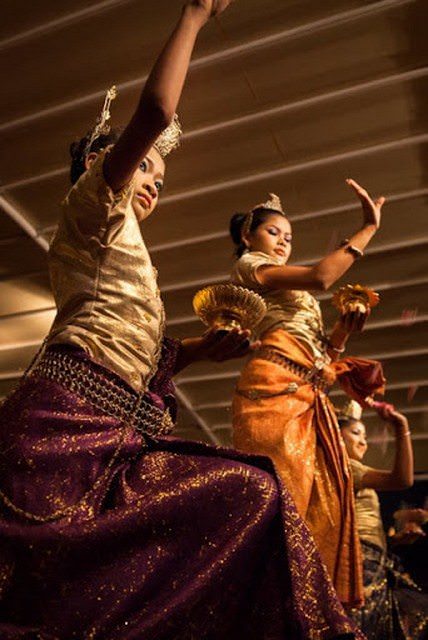 Onboard entertainment reflects the diverse regions in which Pandaw sails. Photo courtesy of Pandaw Cruises.

This morning, journey up-river to the pre-Angkorian temple of Wat Hanchey. Dating back to the 8th century, this ancient brick structures characterize the architecture of the Chenla Empire, which predated the glories of Angkor. Later, sail downstream during lunch for an exploration of the picturesque Kampong Cham Area. By bus, travel to the 12th century Angkorian temple of Wat Nokor. This colorful temple is unique in Cambodia, as a modern wat is set within the ruins of an ancient temple. Continue on to the eco village of Cheungkok, which is supported by the French-Cambodian NGO AMICA; and the Kampong Cham orphanage, supported by the Pandaw ProBono program.

Sail by the capital of Phnom Penh in the early morning to change pilots, followed by a journey up the Tonle River, which connects Tonle Lake with the Mekong and Bassac rivers that merge near Phnom Penh. The sailing up the Tonle is a highlight of the trip: Temples line the river banks at Kampong Chhnang, and the rich tapestry of Cambodian rural life is on display for all to see. Kampong Chhang is a busy rural port town with bustling markets. The ship will anchor mid-stream. Embark on a motor-boat excursion that takes you deep into the lakeside wetlands that form the mouth of the river. Here, a stunning variety of birdlife can be seen, along with the great fish traps that are present. 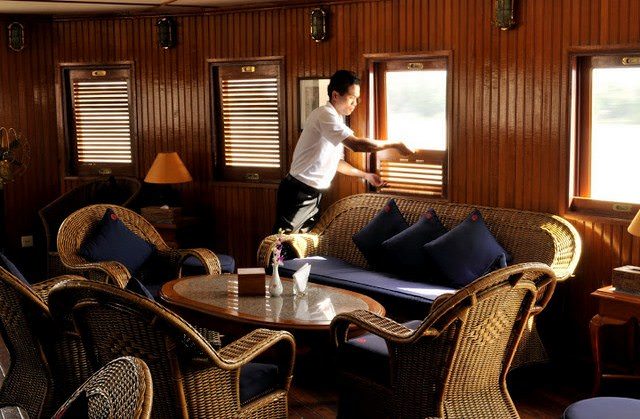 Awake to a new scene each morning. Photo courtesy of Pandaw.

This great lake dominates Cambodia and is more than 150 kilometers in length. Birds are abundant in this area, sometimes producing the only sounds that can be heard as you sail past tranquil floating villages that are used for fishing. On this last morning, travel by coach from Prek Dom on the Tonle River to Siem Reap, arriving around lunch time. Don’t worry about not having enough time to eat breakfast: Pandaw provides a packed lunch and refreshments for the journey. 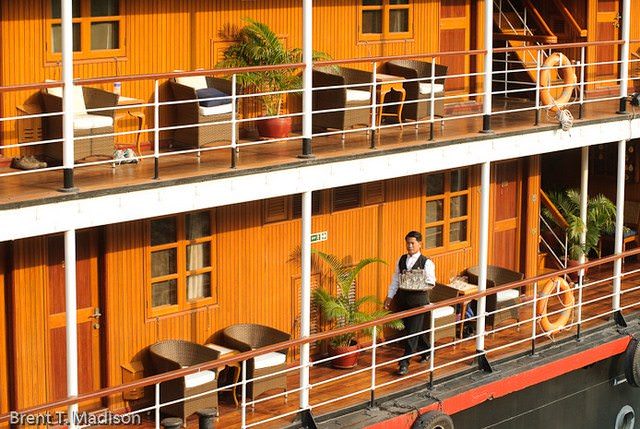 Kick back and relax on the ship’s expansive promenades. Photo courtesy of Pandaw.