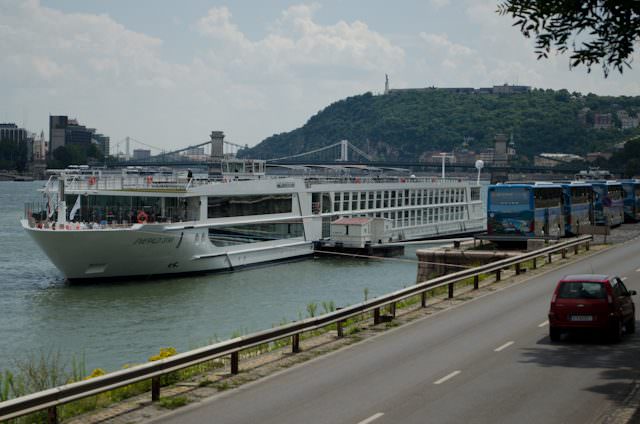 Emerald Star docked in Budapest on the Buda side of the city. Photo © 2014 Aaron Saunders

The History of Emerald Cruises

Emerald Cruises was founded by an Australian-based company, Scenic Tours, which started in 1986 as a coach tour company serving Australia. By the early 1990s the company had moved well beyond the borders of Australia and had become a world-wide tour company.

In 2005, Scenic began to charter river cruise ships for its guests traveling in Europe. Then in 2008, the company launched an upscale river cruise line with its own ships, branded as “Scenic Space Ships.” While Scenic’s luxury brand catered to travelers who were seeking upscale river cruise experiences, the company also saw a need to serve the less-affluent (and possibly younger) travelers. Thus, the concept of Emerald Cruises was born. Like the Scenic brand, Emerald Cruises has its own custom-crafted vessels referred to as “Star Ships” that began sailing on a few of the waterways in Europe on April 15, 2014.

Glen Moroney, the owner of Scenic, told us that Emerald is a “four-star product operating on five-star hardware.” That’s a pretty good description in our minds.

From the company’s modest debut, Emerald continues its expansion.

Currently, Emerald Cruises offers 8- to 17-day itineraries on the Rhine, Rhône, Douro, Moselle, Main, Volga, and Danube Rivers in Europe, as well as cruises along the Mekong and Nile. There are cruises available on the Rhine only and on the Danube only. However, most combine at least two waterways. Some examples include:

Prepaid gratuities, airport transfer fees, and port charges are included in the fare, which can save you up to an estimated $650 per person compared to other cruise lines that are less inclusive

Want My Help With Your Emerald Waterways Cruise?