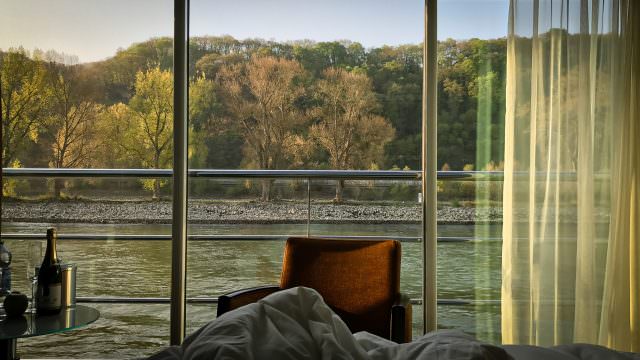 Avalon Waterways traces its roots back to 1928, when Antonio Mantegazza used a rowboat to transport goods across Switzerland’s Lake Lugano. His business evolved into motorcoach tourism and expanded into an international travel brand: Group Voyagers, Inc. – parent company of Avalon Waterways. This consortium of well-known brands such as Globus, Cosmos, and Brennan Vacations has been a leader in escorted tours of Europe for almost a century, but it wasn’t until 2004 that the company launched Avalon Waterways’ fleet of royal-blue river cruisers.

The Avalon Waterways’ fleet expanded quite rapidly between 2008 and 2012. Avalon Scenery commenced the procession of new vessels in 2008, followed quickly on the heels by Avalon Creativity and Avalon Affinity in 2009. The next year champagne crashed over the bow of Avalon Luminary, with Avalon Felicity and Avalon Panorama continuing this celebration of new berths in 2011. The year 2012 witnessed three new additions to the fleet: Avalon Angkor, Avalon Visionary, and Avalon Vista. 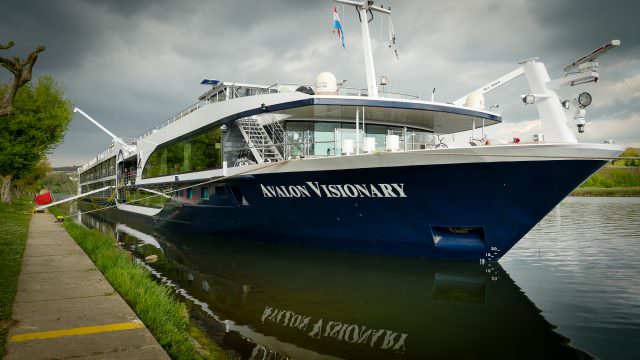 Avalon’s “Suite Ships” accommodations measure between 200 square feet and 300 square feet apiece and are equipped with Avalon’s signature Open Air Balcony – a French-style balcony that opens wall-to-wall, transforming staterooms into a giant veranda. These Open Air Balconies are found in nearly 80 percent of the total accommodations aboard Avalon’s Suite Ships in Europe.

Hotel-worthy beds, satellite TV and bathrooms with full-sized showers comprise the interiors and these ships also have complimentary WiFi Internet access, an expansive sun deck and a small fitness center. However, not all of Avalon’s ships in Europe are Suite Ships. Aboard the four non-Suite Ships – Avalon Creativity, Avalon Felicity, Avalon Luminary and Avalon Affinity – all staterooms, except for the Royal Suites, measure 172 square feet. 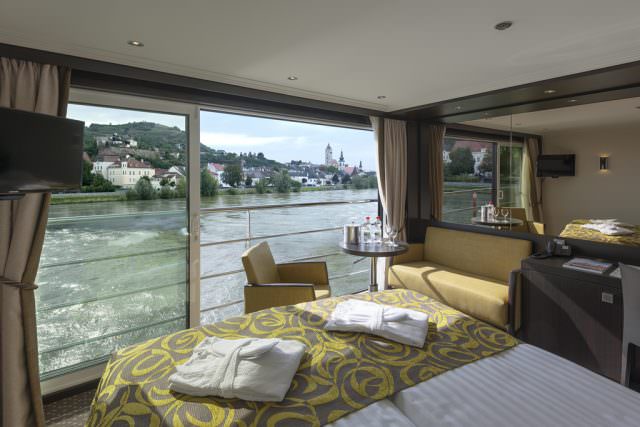 Each ship within the Avalon Waterways’ fleet features an intimate dining room, a relaxing Main Lounge with panoramic views, a reception and Internet workstation area, and a small fitness center and hair salon. An expansive sun deck allows guests to stroll and enjoy the fresh air, or relax in a deck chair and take in the ever-changing scenery. And while it’s nearly impossible for river cruisers to feature anything more than two dining rooms, Avalon is creative enough to offer guests seven dining options throughout the day. 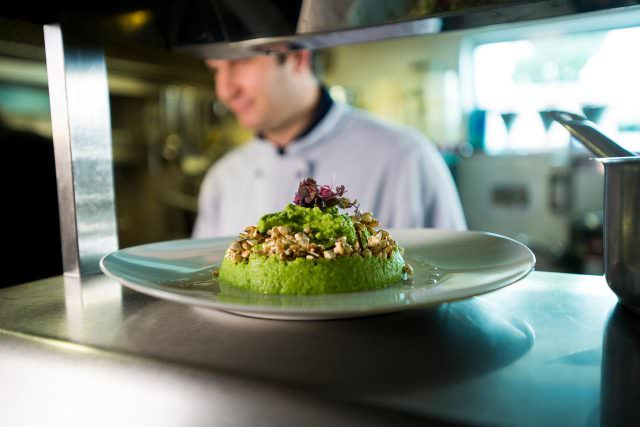 Continental breakfast is offered through room service – something you don’t see a lot on river cruisers. Then there is the early-riser’s breakfast, the full main dining room breakfast, and finally a late-riser’s breakfast. There are usually two options for lunch (including an outdoor grill), and two for dinner, including the Panorama Bistro, which serves tapas-style, Mediterranean dishes for up to 24 people in a section of the main lounge. Onboard, complimentary regional wines, beer and soft drinks are offered during lunch and dinner.

One differentiating factor for this cruise line is that it boasts the backing of the huge Globus family, which offers some practical value: those who are members of Globus’ Journeys Club, for example, receive discounts and other perks for traveling within the family of brands. The brand’s large footprint in Europe also helps with operational infrastructure, such as guides and transport, theoretically enhancing the guest experience.

Choices abound for Avalon’s passengers even before they embark. Travelers can customize itineraries ranging from 3 nights to 22 nights. Moreover, besides the default included shore excursions, Avalon offers custom options—for a fee. So if you like to have the flexibility to choose whether to head out on a morning excursion and relax in the afternoon or set off on another excursion, Avalon could be just the cruise line for you.

Our ‘Top Three’ for Avalon Waterways

Questions about Avalon Waterways? Please ask in the comments box below.

Read other articles on River Cruise Advisor about Avalon Waterways.