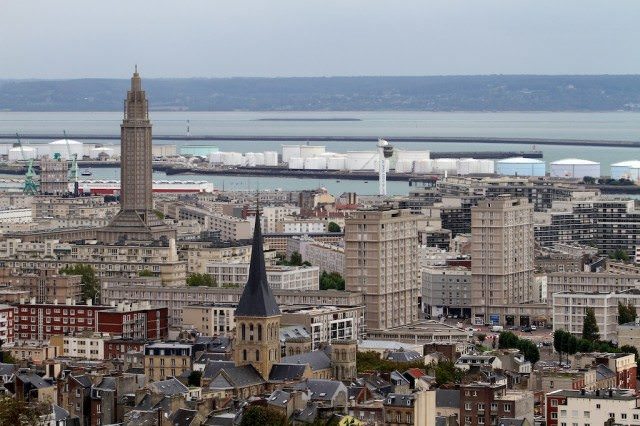 Originally founded in 1517 by King Francis I, Le Havre quickly became a popular trading port between the West Indies and France and Europe. Its name in English literally means “the harbor.”

Le Havre was almost completely destroyed in September 1944 during World War II, obliterating more than 80 percent of the city center and devastating the port. But the past few last decades have been good to this beautiful port located at the mouth of the Seine.

In 2005, World heritage organization UNESCO added the historic city center to its prestigious list of protected sites, marking the first time a modern 20th century European city has made the list. This revitalization owes much to Auguste Perret, who rebuilt the city center in the new modernist style, transforming it into a shining example of post-war planning and construction.

While the city has grown to be an extremely popular port of call for many oceangoing cruise ships, it remains a relatively new port for river cruise vessels, but one which is likely to grow in popularity thanks to its prime location at the mouth of the Seine and with convenient access to historic Normandy.

Le Havre also has the distinction of being the deepest ocean port in all of France.

Your river cruise ship will tie up at one of two dedicated docking areas: Quai des Antilles or Quai des Marseille, both of which are located in roughly the same area of Le Havre’s Inner Docks.

If you’ve been to Le Havre before on a more traditional cruise ship, you’ll notice that the larger oceangoing ships must tie up farther away at Pointe de Floride. Instead, river cruise vessels visiting the port are able to tie up near the fashionable new shopping center, Les Docks Vauban, right in the heart of Le Havre’s port district.

Your river cruise ship will call on Le Havre for at least a full day, and some cases, two, three or even six days, leaving you plenty of time to explore this fascinating city.

When in Le Havre …

Le Havre’s old dock area has recently been revitalized, and as you disembark from your river cruise vessel, you can find a multitude of shopping and dining experiences right in the heart of the port itself, including the newly opened shopping center, Les Docks Vauban.

An information desk for Le Havre Tourism can also be found here.

While the city lost many of its historic buildings to the bombings of World War II, Le Havre still offers some impressive attractions.

Le Havre also makes the perfect home base for exploring historic Normandy. Regrettably made famous for the horrific fighting along its beaches during World War II, the region of Normandy boasts its own distinct culture, from food to wine, towns, landscapes and of course, its friendly people. It also boasts more than 350 miles of pristine, highly photographic coastline.

Le Havre is also known as The Gateway to Paris, due to its relative ease of access to the famous French capital. Direct train service is available from Le Havre’s Gare du Havre station, and takes about two hours to reach the capital. Most trains will stop in Rouen en-route.

Read more about Le Havre and get detailed information about getting around as well as what to see on Avid Cruiser.