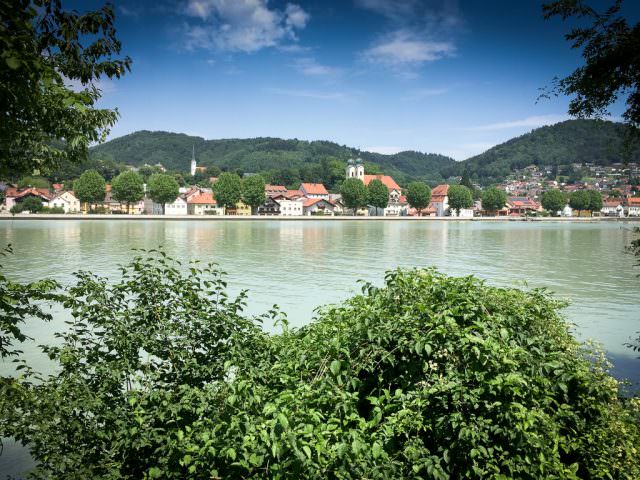 Austria is the perfect place to experience history firsthand. From archaeological excavations to open-air museums and countless exhibitions, Austria’s eventful history from the Roman era to the present day is apparent everywhere.

In 1991, the discovery of a mummified Stone Age man frozen in an Alpine glacier, whom the Austrians lovingly call “Ötzi”, made it very clear that Austria’s history truly is ancient. From the 7th century B.C., the territory of today’s Austria was regularly raided and populated by belligerent Celts and Germanic tribes.

Later, Romans settled in the area, and many of today’s cities stand on Roman civil or military settlements. After the collapse of the Roman Empire, Germanic tribes, Slavs, and Avars settled in the region. Charlemagne, the first Holy Roman Emperor, established a provincial outpost in the territory to protect his empire from eastern Magyar invaders. Over the years, the region gained in importance and not only as a defensive bulwark.

Two dynasties, first the Babenbergs and later the Habsburgs, added territories to their main lands through strategic marriages, heritage contracts, and political cunning. Under Habsburg rule, the Austrian lands eventually spanned half the globe, including Spain and its territories in the New World. Consequently, the country adopted many new customs and ideas, many of which thrive today in Austrian culture.

The rule of the Habsburg ended only with World War I, and it took the country a while to form a new identity after centuries of belonging to an ethnically diverse empire. After the dark years of World War II, when Austria was part of the Third Reich, the Second Republic was formed in 1955 and in the 50 years that followed, Austria established itself as a stable and peaceful country rich in culture and history.

You can experience some of Austria’s history yourself when you visit the various historical sites in Austria. The Wachau Region, for example, is the site of one of the most famous archaeological finds in Austria, a famous figurine named the Venus of Willendorf, which was created around 25,000 BC.Hallstatt, a picturesque lakeside town, was the main site of an Iron Age culture with the same name.

The Roman civilization left its traces as well. You can visit excavation sites in Vienna, or at the nearby Open Air Museum Petronell, the site of a former Roman army camp and important civilian town.

While the remnants of ancient Rome are impressive to visit, the medieval castles that are scattered all across the country will transport you back to a time when knights in shining armor were supposed to defend their ladies and peasant servants from hostile invaders. Mostly though, they fortified their castles, not only to ward off Turkish armies, but also to protect their interests from equally ambitious political enemies. The ruins of Duernstein Castle, where Richard the Lionhearted was held captive, overlook the picturesque Wachau Valley, which was then a major thoroughfare for knights on their way to some Crusade or other.

Castles, however, are not the only remnants of the Middle Ages worth visiting. Hall in Tirol, for example, used to be an important mining town and the site of the royal mint. Here the first Thaler was minted, in its day, it was one of the most important coins in Europe. Learned monks vast libraries in abbeys and monasteries, which held vast libraries. Many of those monasteries have been altered over time, but original structures can still be made out, and the libraries, such as the one in the imposing Melk Abbey, display examples of particularly valuable hand-painted manuscripts.

When the emperor of the Holy Roman Empire, Franz II, pronounced himself Emperor of Austria, the hereditary Austrian Empire was established. Our cities still display the splendor and romance of these times. You can visit the palaces, where the ruling families lived, treaties were signed, and history was made. The spires of impressive cathedrals give the skylines a distinctive look, and the stucco facades of Biedermeier houses reveal glimpses of earlier lifestyles.

The prime example for a city that has preserved its historical character to this day is, of course, Vienna. By the turn of the 21st century, Vienna has established itself as a trendsetting metropolis with a cultural life that shows its influence all over Europe. When you visit Vienna today, you can tour Schönbrunn Palace, the summer residence of the Imperial family, or have a look at the formidable Neoclassical buildings, such as the state Opera or the Parliament, that stand where the former city wall used to be. You can walk past the Viennese Secession buildings of Adolf Loos and Otto Wagner, visit exhibitions of Wiener Werkstätte furniture, or dance to Johann Strauss’s waltzes at one of the countless Viennese balls. You will notice that the Viennese live and love their traditions as much as they embrace innovation and change.

Follow the links below for a look at some of the places that your cruise might stop when you are cruising the “Blue Danube” in Austria. 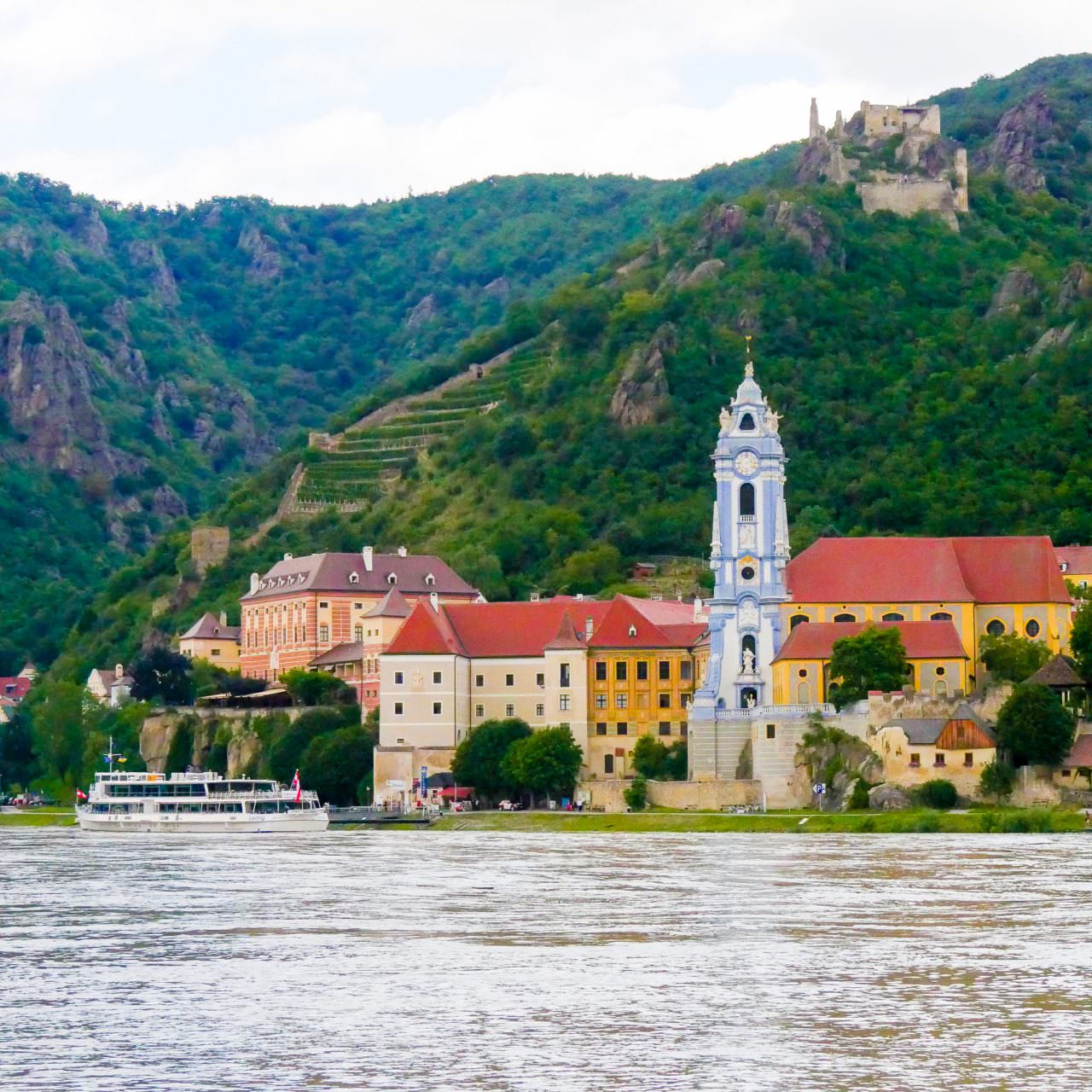 Our Wachau Valley ride took us to Durnstein. © 2016 Ralph Grizzle

Durnstein. Located along the famous Danube in Lower Austria, Durnstein is well-known for its wineries and is one of the most popular tourist destinations in the Wachau region. The city’s name literally means “dry castle” in German, presumably after the stone castle situated high above the main town area. Read more. 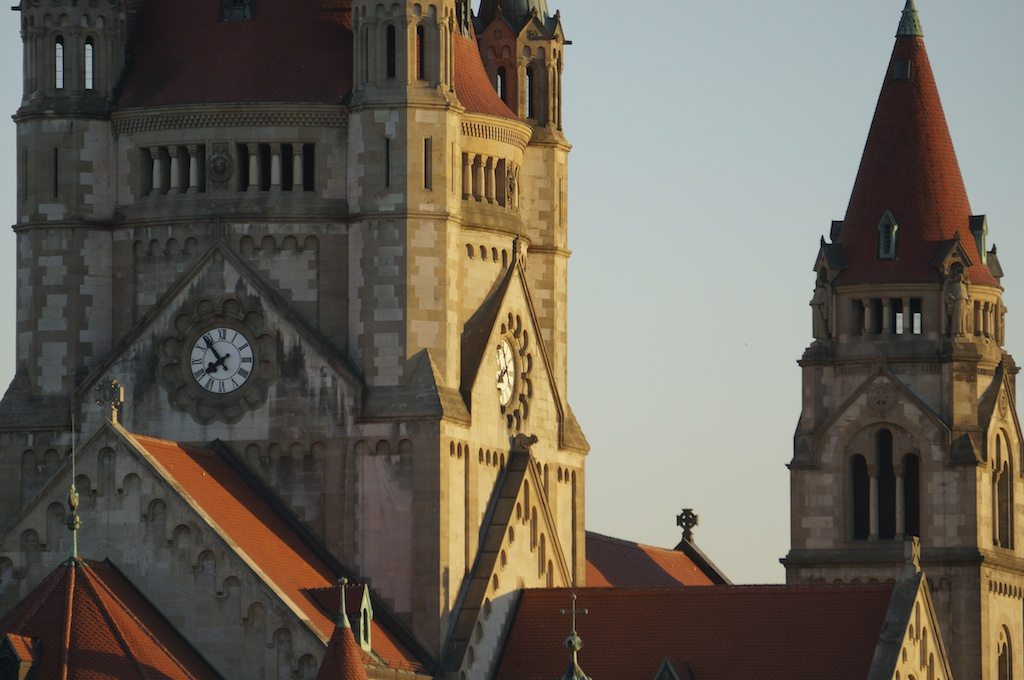 St. Francis of Assisi Church, also known as the Kaiser Jubilee Church and the Mexico Church, is a Basilica-style Catholic church in Vienna, Austria. @ 2013 Ralph Grizzle

Vienna. The capital of Austria is a fantastic stop – or starting destination for your Danube River cruise. The city features impressive Baroque architecture and sights such as St. Stephen’s Cathedral, Schonbrunn Palace and Hofburg Palace. Read more. 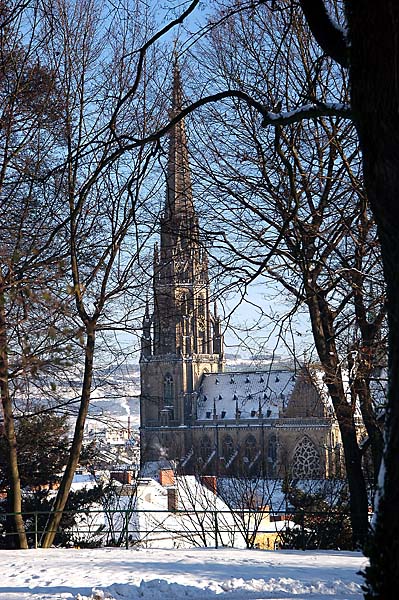 Linz. First founded by the Romans, Linz is home to roughly 200,000 citizens. It is the third-largest city in Austria and the capital city of the state of Upper Austria. Read more. 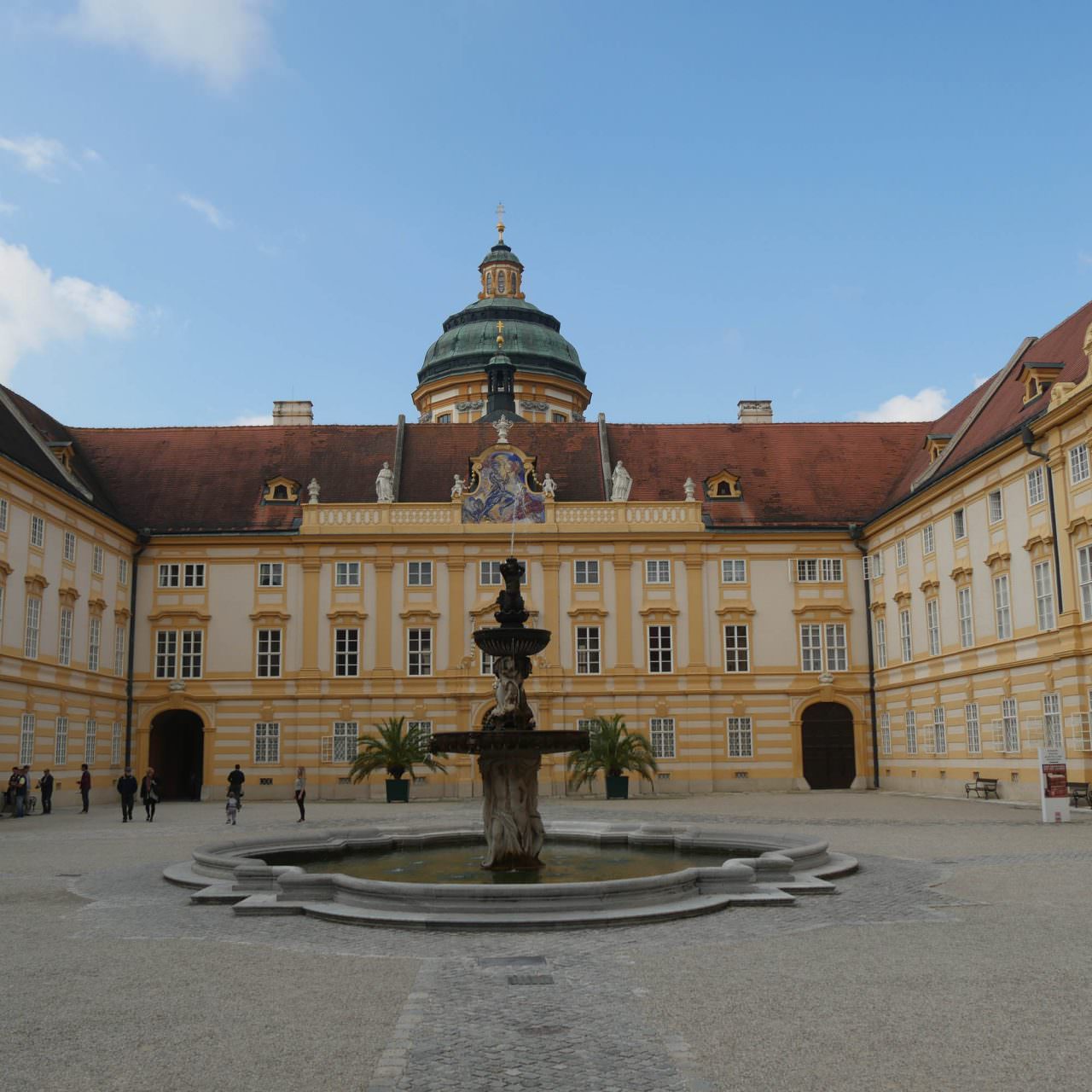 Melk. Take a tour of the Benedictine abbey in Melk, where you can walk among some awe-inspiring architecture in the gorgeous Wachau Valley. Read more.