American Cruise Lines announced its next new ship is already being readied for launch. The forward hull section of American Melody was moved from a hull fabrication building to the launch ways earlier this week, where it will be joined to the aft section and launched into the Wicomico River. 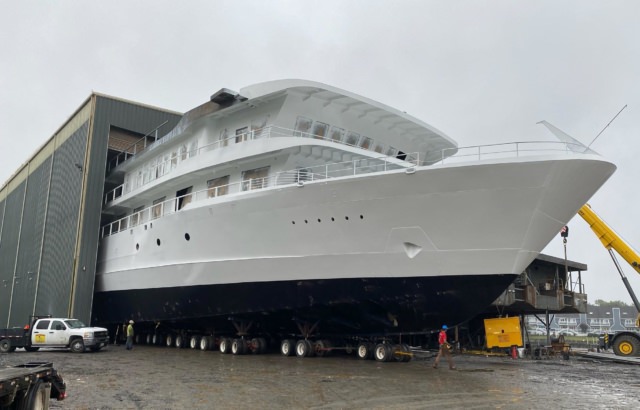 The hull section utilizes a heavy-lift ground-transfer system that distributes and levels the load as it moves. Towering above the shipyard’s personnel on the ground the hull slowly and almost silently glides to its destination at the river’s edge.

American Melody, the 4th new ship in American Cruise Lines’ acclaimed modern riverboat series, is on schedule for delivery to the Mississippi River next year. It will feature the next iteration in the modern series’ contemporary design aesthetic, but the Line has not yet released details of the new ship’s interior concept or capacity.