You are here: Home / Commentary / SURVEY RESULTS: Our Community’s Thoughts On Traveling During The COVID-19 Outbreak 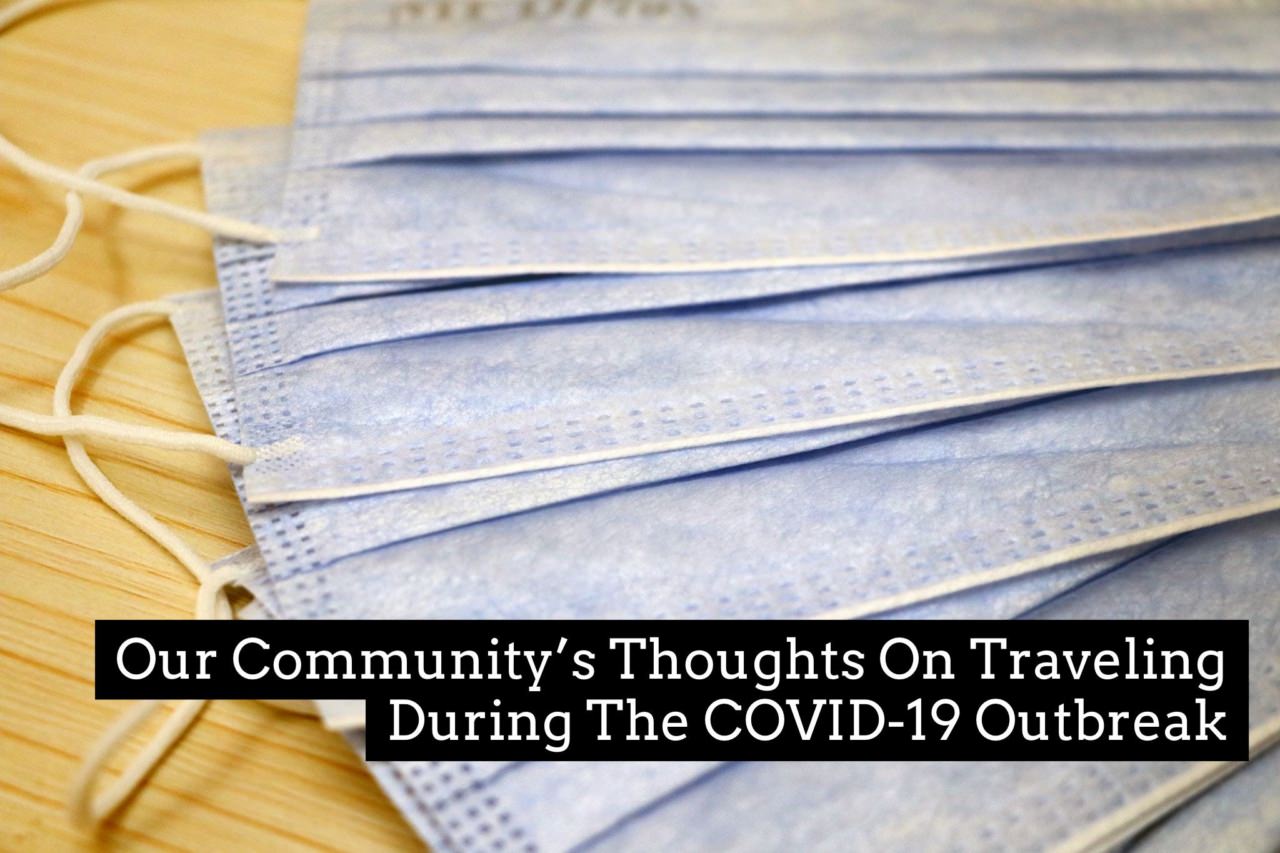 Last week, we wrote an article called Should You Stay? Or Should You Go? that addressed some of the concerns that our readers had about cruising during the COVID-19 outbreak. We encouraged readers to weigh the losses that they would take if they had to cancel their trips.

Now, things have changed. It is not only a question of should I go, but also can I go? There have been more travel restrictions put in place in an attempt to prevent the further spread of the virus in the United States. The US President has said that starting tomorrow, all travel from Europe, with the exception of the UK will be banned.

There have also been cruise lines, such as Viking and Princess Cruises, that have decided to stop cruising all together until May. We can assume that other cruise lines will follow suit, as more cruise ships are being turned away at ports. In fact, just a few days ago a Royal Caribbean ship was turned away in Dubai due to a passenger with respiratory problems. The passenger was given a test, which came back negative, allowing the ship to carry on.

So what does this all mean? Some people may still be willing to cruise. Some cruise companies may keep bookings open. There’s really no way to know right now. What we do now, though, is how our readers have reacted to the COVID-19 outbreak, and how it is impacting their travel plans.

In The Should You Stay? Or Should You Go? piece mentioned above, we polled our readers to try to understand how they were going to best deal with the pandemic. Here are some of the responses.

Those Who Will Cruise, Or Are Thinking About Cruising

“I already have an Azamara cruise booked, but if it were to get canceled, I wouldn’t hesitate to book a river cruise to replace it, if the price were right.”

“I would do a river cruise as long as crews regularly disinfected public areas and enforced passenger hand sanitation.”

“I believe as long as people practice good sanitary practices and stay aware of the potential dangers, it should still be relatively safe…I think.”

“I am booked to cruise the Rhine at the end of May. At this point I am adopting a wait and see attitude. I have CFAR insurance. I don’t want to go if the sites I want to visit are closed or if the areas becomes hard hit by the virus. I would gladly reschedule if that occurs.”

“I think it is important to support the travel industry. In fact, I have just booked a cruise for May because the pricing was good and would not hesitate to book again during this period.”

And, in wise words: “The greatest risk may be getting to and from the airport in your car.”

The comment about driving to the airport may seem like it’s downplaying the severity of COVID-19, but there is some truth to it. Car crashes account for thousands of deaths every day. Just something to think about.

Those Who Will Not Cruise

“Look at the experience of the passengers on recent cruises who found themselves locked down and quarantined on the vessel because a passenger tested positive! A high percentage of quarantined passengers also caught the virus. I am staying away from large crowds and that would definitely include cruise ships of any description.”

“Although prices are low, the idea of being confined on a boat is not appealing. The other problem is that even if there are generous cancellation conditions for the cruise itself, the booking of flights is a consideration.”

“My thoughts on booking a river cruise this year would be I probably wouldn’t as I don’t want to be stuck on a ship overseas especially as I could be quarantined on board and stuck in a cabin unable to get off ship if coronavirus broke out. Could be unable to return home for weeks also overseas health care probably wouldn’t be covered by health travel insurance and wouldn’t risk it.”

“I am canceling a May 2020 cruise Athens to Athens on Windstar – not worth the risk of getting sick or getting stuck on a cruise ship and or quarantine.”

“Mostly I’m concerned about my responsibilities and commitments for a 2 week (maybe more) period if held in quarantine first on ship then more time on land.”

The most interesting thing that came up in doing this research was the fact that most people who responded to the survey seemed to be worried about the threat of a possible quarantine more than contracting the virus. This is understandable. While the quarantine on the ship might only be for two weeks, there is a possibility of a series of quarantines after that.

Take Cheryl and Paul Molesky, for example. The couple were passengers on Diamond Princess, and after two quarantines spanning over 27 days, they have still not returned to their home. For those with children or pets, the threat of quarantine becomes even more real. It doesn’t seem realistic to take a 7-day vacation that ends up turning into a month-long vacation – or isolation, rather.

It is hard to think to the future right now. But we are confident that we will be cruising again in no time. This too shall pass.

One of our favorite responses to our survey was this:

“I can catch the flu here at home … and even being quarantined for two weeks somewhere … could be an adventure. Some of my best and most memorable travel experiences have included challenges. If I wanted everything to stay the same, I’d stay home!”

We always appreciate a positive outlook. And as always, we appreciate your feedback.

Thank you for being a part of our community. 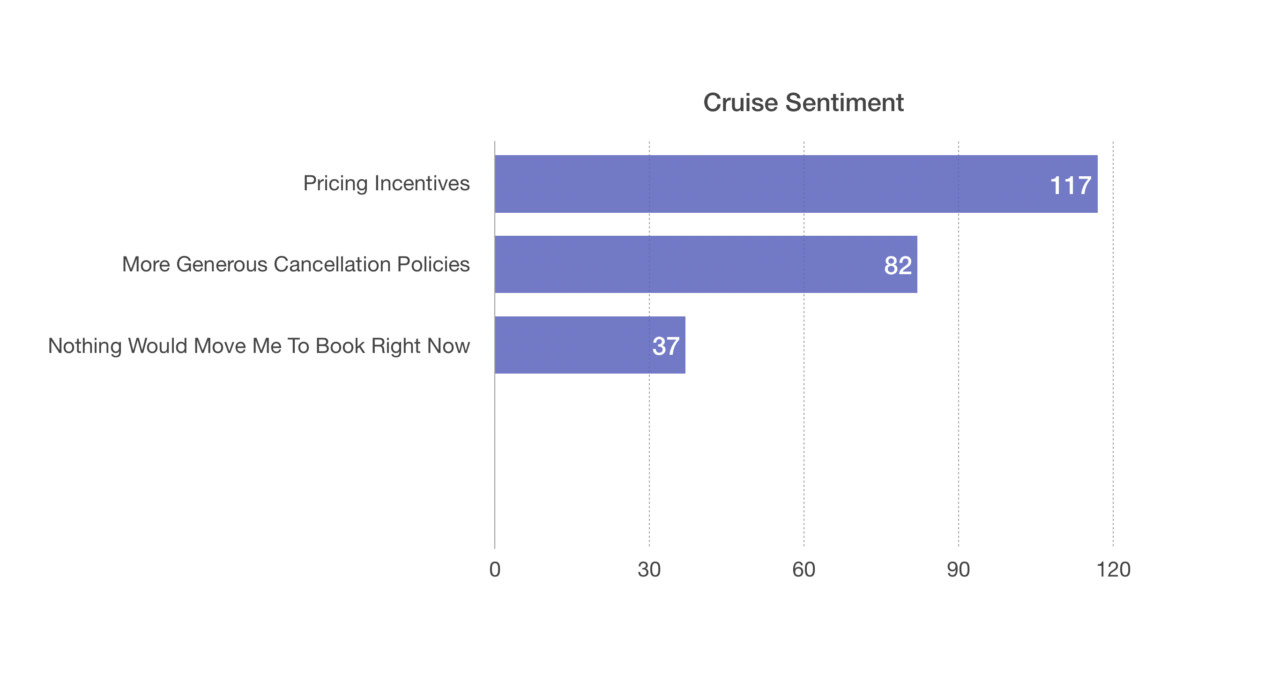 The numbers in the chart above were compiled from surveys last week from both of our sites, avidcruiser.com and rivercruiseadvisor.com.

For those of you who have questions about insurance, we’re publishing this piece from InsureMyTrip.

Due to the high number of inquiries from reporters regarding the growing impact of the coronavirus on travelers, InsureMyTrip is issuing the following update on how the travel insurance industry is responding:

• Expect an increase in requests for “financial default” travel insurance coverage due to concern over the potential economic fallout. Emergency medical care coverage also in high demand, for those traveling outside the US.
• Policyholders should seek clarification from their travel insurance company regarding how coverage may or may not apply for quarantine situations. There are some ambiguities.
• Cruisers strongly consider travel medical coverage in the event they continue on with their sailings.
• Most travel insurance companies vow to continue offering “cancel for any reason” coverage despite increased demand. We are also not aware of any travel insurance price increases at this time.
• Travel insurance policies sold are up 200% since January, according to InsureMyTrip. This is the highest increase ever reported for our company in the past 20 years.
• Call volume and website traffic remain high. Some fluctuations, but hovering around 145%.
• The New York Governor recently approved the sale of “cancel for any reason” benefits to its residents (it was previously not allowed). It could take several weeks for some policy updates to hit the marketplace.
• With upcoming trips for millions of US travelers either in jeopardy or limbo, InsureMyTrip is advising travelers to check with suppliers regarding cancellation policies. Many suppliers are being flexible (ex. waiving fees).
• Travelers may also still be eligible for “cancel for any reason” coverage in the event they want to cancel a future trip due to virus fears.