Emerald Waterways was founded by an Australian-based company, Scenic Tours, which got into business in 1986 as a coach tour company serving Australia. By the early 1990s the company had moved well beyond the borders of Australia and had become a worldwide tour company.

In 2005, Scenic began to charter river cruise ships for its guests traveling in Europe. Then in 2008, the company launched an upscale river cruise line with its own ships, branded as “Scenic Space Ships.”

While Scenic’s luxury brand catered to travelers who were seeking upscale river cruise experiences, the company also saw a need to serve the less-affluent (and possibly younger) travelers. Thus, the concept of Emerald Waterways was born. 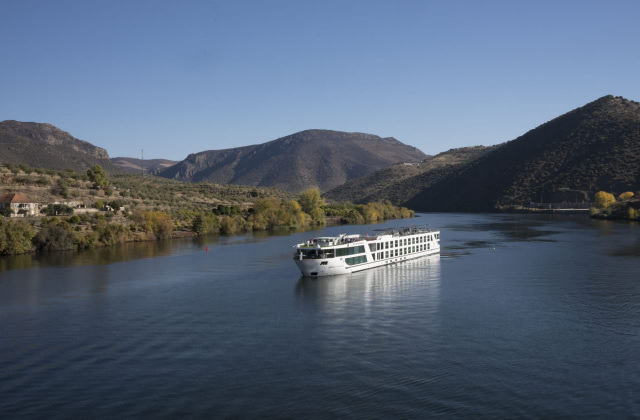 Like the Scenic brand, Emerald Waterways has its own custom-crafted vessels referred to as “Star Ships” that began sailing on a few of the waterways in Europe on April 15, 2014 with two brand-new, 182-passenger ships, Emerald Star and Emerald Sky. Both ships measure 443 feet and hold 182 guests in 92 staterooms—72 of which are suites.

The company followed their modest debut with two more ships in 2015, Emerald Sun and Emerald Dawn, which had the same footprint as the first two. The next two ships built were more diminutive, with 360-foot Emerald Liberté built in 2017 to provide 8-day cruises for 138 guests on France’s Rhône & Saône.

The same year Emerald Waterways built their most intimate ship to date, Emerald Radiance, to sail the Douro. Emerald Radiance has a guest capacity of 112 divided into 55 suites. Paired with the crew-to-guest ratio of 1:3, this low capacity provides a heightened level of service.

In 2019, Emerald welcomed Emerald Harmony to its fleet. The ship sails the waters of Southeast Asia’s Vietnam and Cambodia.

Emerald Waterways’ ships have been referred to as a four-star product operating on five-star hardware, and I think that’s apropos. Though there are also some pretty unique features, like a heated pool complete with retractable roof that converts into a cinema. Prepaid gratuities, airport transfer fees and port charges are included in the fare, which can save you a bundle compared to other cruise lines that are less inclusive.

There are a lot of itineraries from which to choose navigating the rivers Rhine, Main, Danube and Moselle on the sister ships, Emerald Star, Sky, Sun, Dawn and Destiny. I particularly enjoyed Emerald Waterways itinerary in Eastern Europe from Budapest to Bucharest. You’ll visit less developed ports in places like Serbia, Bulgaria and Romania that are largely untapped by today’s river cruisers. I really liked what I saw when I cruised on Emerald Sky in April of 2016. The vessel was modern and sleek, with staterooms and public rooms that were bright, contemporary and inviting.

Prepaid gratuities, airport transfer fees, and port charges are included in the fare, which can save you up to an estimated $650 per person compared to other cruise lines that are less inclusive. Bicycles are on board for those who want to pedal ashore

Check out my post My Take On Emerald Sky: Five Favorite Things