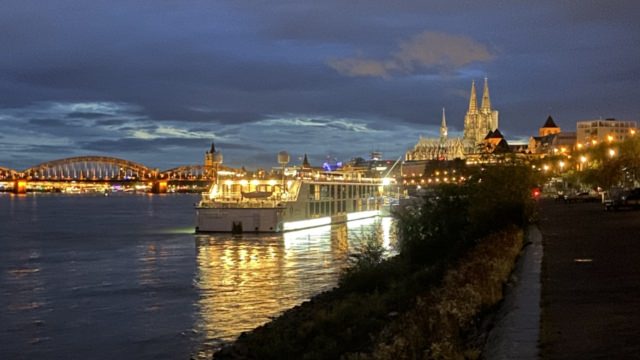 During his time aboard Crystal Bach, Ralph had a chance to sit down with the President and CEO of Crystal River Cruises, Tom Wolber. Last week, we aired part one of the interview, where Ralph and Wolber discussed their time on the Moselle. This week, the conversation focuses on what makes Crystal River Cruises different. With an emphasis on Crystal’s river ships themselves and also on the crew aboard these ships, it becomes quite clear that Crystal stands out in more ways than one.

Listen to the podcast or read the transcript below.

Ralph: In my story on Crystal Bach, I wrote that this is really next level river cruising. It’s…when you take every component of this cruise, the hardware, you know, our staterooms, the restaurants, and then you add on the incredible staff that Crystal is known for. I mean, it just…it’s next level

Wolber: And it was designed to be the next level. Well, you know, we kind of as the last entry into the river cruise markets. We had the opportunity to kind of deconstruct the whole river cruise product and, and, and see what people like about it and see what people did not like about it and then put it back together in a way that we think that for the luxury passenger, for our passenger, would make sense. So it’s, it starts with giving people the space that they like to have. I mean river ships are all the same size. They’re the same footprints. They’re the same length, the same with the same height no matter what company. So, you’re kind of limited what you can do with those ships. But we heard loud and clear that the typical river cruise stateroom size was not big enough for our guests. And we responded to that by, one, not putting an external balcony on it, but then the balcony inside and make the windows a retract and give you that kind of open feeling inside of your room. And the staterooms are a bit bigger they all have a walk-in closet. They have a generous bathroom. And so you start with that. That limits already a bit the amount of passengers that you can put on it. Then the second thing that is a key element for the Crystal experience is the quality of the dining experience. And as we just got rid of the two seating dining on the on the oceans and made it the open seating, we wanted to do the same on the river. We did not want to have a restaurant where people were told when to come and, and all come together. So we want people to just walk in and make a reservation for whatever time they want to come. And we also wanted to be true to what we do and that is cook everything fresh, sustainable, locally sourced and, and brought on and locally prepared by our culinary team. So the size of our galley is quite a bit bigger than you would typically find on a river ship. And when we had put all of that together, we kind of knew that we were left with space for about 106 to 110 passengers in that type of design. And to ensure that up to our levels, we knew that we had to put about 60 crew on it to what crystal does best. And so that’s how the ships came about and we tried to put the latest technology on it, but as that goes, that changes by the year. But I think if we’re keeping up with it pretty well. But they are, they’re nicely designed. We get rave reactions from our, from our guests on the Palm Courts. They absolutely love the restaurants, Bistro, the options that they have. And so the only thing that if you come from the ocean, and many of our passengers are repeat passengers that tried the ever come from the ocean. You don’t have a large spa or large treatment space and nothing that, that something nor any retail space. Those are kinds of things that we wished that we could add. But we haven’t figured out how to do that yet.

Ralph: Yeah. Well, speaking of coming from the oceans and it seems a fair number of the staff here on Crystal Bach have worked on either Crystal Serenity or Crystal Symphony. There’s a real continuity too between the ocean ships and the river ships. I mean, I could almost imagine that I’m on an ocean ship because it’s that same Crystal service, that same, you know, Crystal…what you deliver on so well.

Wolber: From a crew experience. It’s interesting because we had quite a few Crystal crew members from the ocean that had either left us and have come back or were about to leave us. And the reason was not because they didn’t like working for Crystal. The reason was that because of family circumstances or whatever the case may be, they didn’t want to be that far away for that long of a time all the time. So when we started with the river product, they said, well, you know what, the river is something we can do. I’m from Austria, or I’m from Hungary, or I’m from the Netherlands. I’d love to do that. I mean, I, every week I’m back in Amsterdam, I can go see my family for a little bit. Then so it worked for, for, for the circumstances for some of our crew. And they came back. And with that, we get a lot of that experience into the, into the mix. And I was nervous last year, I have to admit, because we brought four of these river ships out in rapid succession and we rent them up quickly pretty quickly and had a rough season with all the low water issues that we had. We and everyone else had on the, on the, on the rivers last year. So I was, I knew that the turnover on the river for most of our competitors is, is, is high. So I’ve was nervous about having to retain a whole bunch of new crew members when we started the 19th season, we were very lucky. We got 90% of all of our crew came back. So 90% is phenomenal because there’s always some turnover and that’s actually good for the product and for the service. But with 90% of the people coming back. And those are people that we wanted to come back. We were able in the second year to see the scores go even higher than they were last year. And they are at par or if not above with the ocean ships and the yacht. So it is from, from an expectation and from an experience level point of view for our guests, it’s a true Crystal experience and, and it is on par with what they’re used to anywhere else in the world.

Ralph: You can see that they enjoy working here. It’s not only the way they treat the guests, but the way they treat one another. And they treat each other with dignity and respect. And courtesy, you know, I hear them saying the same things to one another as they say to the guys. So I’m not surprised that it would be a 90% return rate.

Wolber: It’s culture. It’s, it’s something that we try to do shoreside as well. We call it our Crystal Family. And as you may imagine, I mean like any family, it’s a, it’s widely dysfunctional, but it, but at the end of the day it’s family and people do feel that they’re valued and people do feel that they’re listened to and appreciated. And with that they like to deliver and step up. I mean, the biggest difference is, you can deliver good service, but you can deliver good service very mechanically. And our crew doesn’t just deliver good service, they put their heart into the service. And that is something that you cannot teach. That is something that has to be fostered through the environments that you create for them. And or with them, I should say. And that is something I think that that we are doing. I just talked to a lady, one of our passengers on this cruise who fell off a bicycle and kind of dislocated some bones in her hand and she had to cancel a cruise that she was to take after this one because she has to go back for an operation in Hong Kong. And she says, she said, Tom, I’m almost happy that this happened because now I’ve seen that your crew is not just about doing the things that you teach them. They are doing it because they care. One of our crew members she needed one of those things to put your arm in a sling and we didn’t have it onboard. One of our crew members was on the market in Cochem and found a sling, bought it and gave it to her. And she said that that just is something that you cannot teach. She cared enough, as she said, it touched me so much that yes, we canceled the cruise, but we booked another Crystal Cruise immediately afterwards. She said that something that you cannot teach that is that the crew does that. And that is something that excites me. That is something that I’m passionate about. And it’s also something that make me incredibly proud.

Ralph: That’s an amazing story. And I experienced something similar but not, I didn’t have to, you know, dislocate bones in my hand and do it. But the first day that I came on board and, and you’re right, it’s heartfelt. It’s something you can’t teach is in their personality, their nurturing. So the first day I’m onboard, my son calls me, he says, “Dad, a Hickory nut is fallen and shattered the sunroof in your car.” So I’m out in the lobby, I sit down and we’re talking, we’re talking. And as we’re talking, Merida leaves the front desk and comes over with a glass and a bottle of water. And I thought, wow, that’s really special. You know? And throughout this whole experience this week, it’s been like that. It’s been things like, you know, just little courtesies that they think of that, and as you know, this crew member did for the lad who, you know, had the wrist injury as well. It’s, it’s very hard to communicate I think in writing or when you tell people the story of Crystal, you have to come and experience it.

Wolber: And, and, and you’re very right about that. I mean the hardest thing for us is to get people to come for the first time after I’ve done that. It’s very easy to get them back. They love to come back.