Riviera was founded more than 30 years ago in the UK as Riviera Travel. The company has only been river cruising since 2015 but has made a name for itself – in the UK and beyond. Riviera started catering toward the North American market in 2017 but the company has seen many English speaking guests from outside of the UK over the past few years. Let’s take a look at what Riviera does differently. 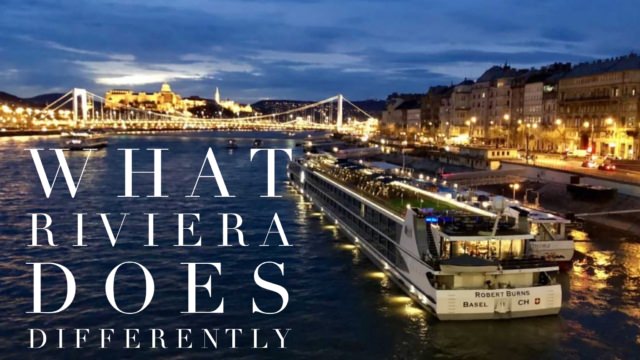 Waived Single Supplement On Every Sailing

No more looking at what time of year you can sail or on which itineraries just to avoid a solo supplement. With Riviera, there are between four and six cabins offered on every sailing with no single supplement.

Solo travelers know how frustrating it can be when they find a sailing that they like with a company only to find that the company is offering waived solo supplements for select itineraries only. Single supplements can be as much as 200 percent of the cruise fare on sailings where the additional fee is not waived. With Riviera, you can be reasonably certain that if you find a sailing you like that the supplement will be waived – just make sure you act quickly since the spots are limited.

In case having a select number of cabins with a waived single supplement on every sailing isn’t enough, Riviera also offers dedicated solo travel departures. Not only does this help travelers avoid paying the dreaded solo supplement, but also helps them meet others who travel solo.

As someone who often sails alone I know that it can be hard to “infiltrate” a group of cruisers that are made up of couples, family members, or friends. Though I’ve never felt like I had to sit alone at meals or in the lounge, solo travelers may find it easier to mingle if everyone on their sailing is traveling solo. Plus, cruising with like-minded travelers can make the journey more fun.

On the flip side, this is also a good option for groups of friends looking to travel. Want to travel with your best friend who snores? Fear not. If the solo supplement is waived for all rooms on a particular voyage, you and your friend can both have your own room paying the same amount as you’d pay sharing a room.

Riviera offers low lead-in prices compared to some of its competition. The company does this by unbundling the cruise fare. What this means is that guests are paying for what they use, and not for what they don’t make use of.

Riviera does not include beer and wine at lunch and dinner – a dealbreaker for some, but a relief for others. (Drink packages are available for $159 per person; $299 for longer sailings.)

Tipping is not included in the cruise fare. Marilyn Conroy, Riviera’s VP of sales and marketing for North America, mentions that since the company is British, so many guests don’t feel inclined to tip.

Riviera does include some things in its fares that other companies don’t include. Port charges, for example, can be more than US$300 per stateroom at the end of a 7-night sailing. Riviera includes these charges so guests won’t feel surprised by one of the hidden costs of river cruising.

Riviera also includes many of the amenities that some other river cruise companies include – a fitness area, pool, library, hair salon and spa treatment rooms. The ships also feature saunas, one of my favorite ways to relax. Toiletries onboard come from Crabtree & Evelyn, L’Occitane, or Rituals.

The interiors of the ships are different than what you might expect for a company within its price point. The company is contracted with Syclla, a Swiss river cruise ship owner who Tauck uses for its European river cruises as well.

During his time aboard Robert Burns, Ralph wrote: 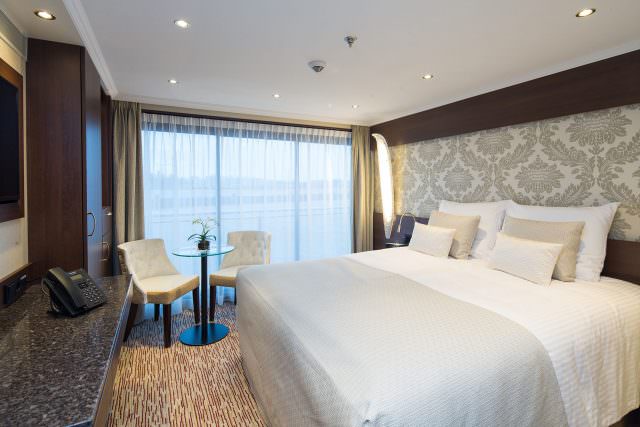 Riviera is clearly an option for solo travelers, but it is also worthy of consideration for travelers who appreciate a good value and all costs upfront. We often get asked about “hidden costs.” With Riviera, there are none.

Have you ever taken a Riviera river cruise? If so, let us know in the comments.