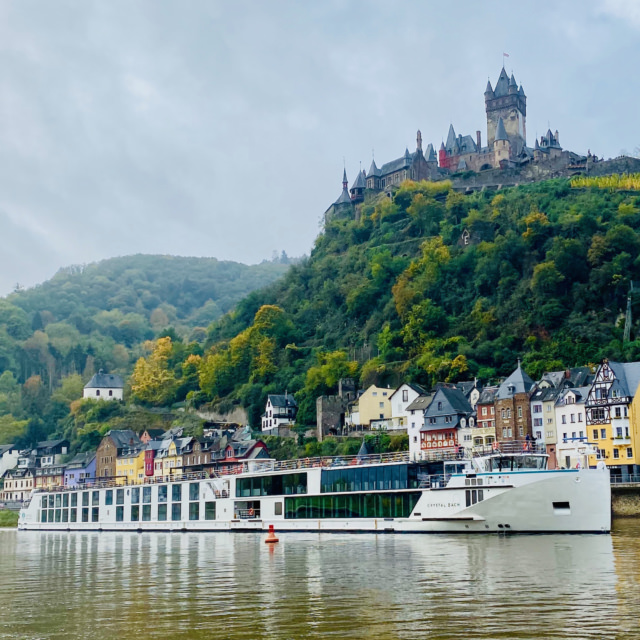 Crystal Bach in Cochem, Germany, on the Moselle. © 2019 Ralph Grizzle

During his recent sailing aboard Crystal Bach, Ralph had a chance to sit down with Tom Wolber, the president and CEO of Crystal Cruises. In part one of a three-segment interview with Wolber, they discuss their time on the Moselle river.

Listen to the interview, or read the transcript below.

Ralph: We should start by talking about just … you made an incredible statement about the Rhine river and the Moselle river and I thought that was a great way to sum it up. Do you remember what that was? What was it you said?

Wolber: Yeah. I think that I described the difference between the two rivers and to try to capture the difference in size and the difference in being known as the Rhine river is, is the river of legends. Everyone knows it. Everyone associated with the big stories and the Moselle river is a river of fairytales. It’s a, it’s a much smaller river. It’s not as well known outside of Europe, but it is, it is truly a river fairytales and romantic. It’s a romantic river, especially this time of the year when the leaves are changing, the colors are spectacular up and down the river, every way you look. It’s truly that difference, I think.

Ralph: Yeah, it’s amazing. Most people coming from Amsterdam to Basel would just pass it by. And yet if you make a right in Koblenz and you go up river, you come into this fascinating, as you say, sort of unknown part to Americans at least, you know, part of Germany. 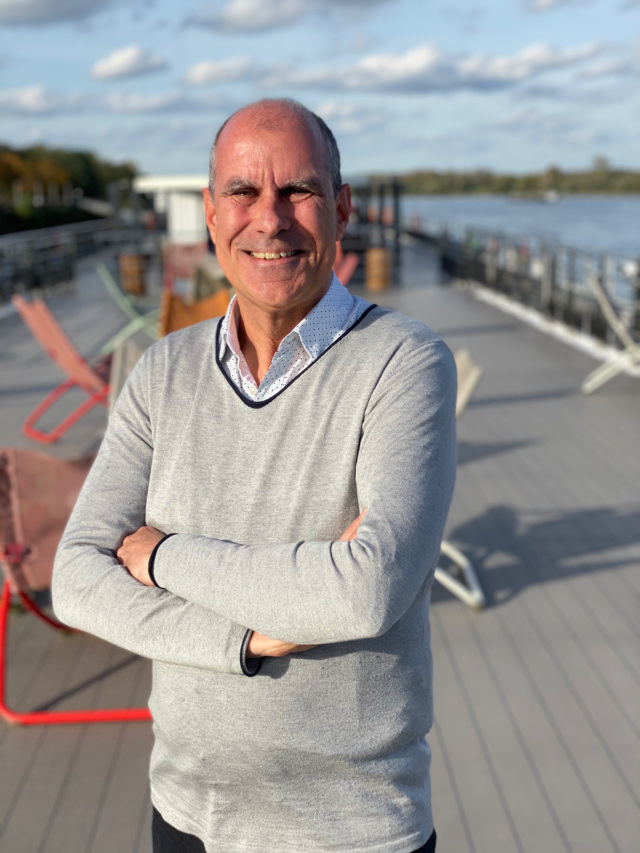 Wolber: Yeah, I mean we, we went together with our sister ship Debussy up to Koblenz. They were parked on the, on the Rhine river side. We were parked on the Moselle side and it was much busier with the river ships on the, on the Rhine river side. And we are on the pretty side, the, for lack of a better term. Both are spectacular rivers, but there’s something really special about the Moselle river, for me, I mean, I, I grew up here, I traveled this extensively and I just think it’s a, it’s a river that we’d like to share much more of with, with travelers from around the world. It’s, yes, it’s a gem.

Ralph: Certainly and the images that we captured with our cameras this week are just incredible. And as you say, being here in October, this time of year is just an incredible time to be here.

Wolber: Yeah, it is. It’s the only time that you get to taste the brand new white wine from, from the season or just picked a couple of weeks ago. There’s just so much to see and do. And it’s not a river that depends on beautiful weather or not beautiful weather every time of the year, every weather condition it is, it’s just nice.

Ralph: In some of the highlights Tom, you know of course, you know, Trier, Germany, which is the I think it’s the oldest Roman settlement. Just, you know, just a beautiful place. And also where we were docked, we were docking in vineyard there.

Wolber: Yes. In Mehring. Yeah, because the port in Trier itself is actually quite an industrial port. So when you use that port, and we sometimes do because of crowding or whatever reasons, but when you are in Trier itself, you wake up to containers and and, and cargo, whereas in Mehring you wake up to vineyards and then you go and take your breakfast. And you’ve seen just the all leaves and you’ll see that even on the other side and just the mountains on the Moselle river almost touch the water everywhere. So you feel really, really brought into that river and by the mountains. It’s, it’s, it’s beautiful.

Ralph: So Mehring, you wake up to your next class of riesling. And we did the we did of course, that allowed us to, to get through that great hike to Luxembourg. We went to little Switzerland, Luxembourg, wonderful hike the, a lot of people did go to Luxembourg for the day as well. Luxembourg City excursions, great excursions to that area as well. And then we had Berncastle and also Cochem. And Berncastle beautiful castle there. But we also had that special event with the virtuosos.

Wolber: Yes, at the nunnery there. That was a beautiful event and it’s one that we’ve done up till this season on every single one of our voyages. And it’s, it’s, well received unfortunately they’re always night events so it is not as well attended as we would like to because one half of the people stay behind cause they’re tired, which of course it’s understandable that the programs are pretty full and the options for shore product are are, are pretty varied. So people get to do a lot during the day. Then they were fantastic.

Ralph: They were. And that one, what I liked about it was that it was about, you know, a 10 minute bus ride, you know, to the event, to the event space. The the music was completely unexpected. I mean the girls all dressed in their red dresses. You know, mixing ACDC with Beethoven, you know, that was pretty incredible. And it was just the right length. They left us wanting more instead of thinking, “Oh man, when this’ll end so we can go back to the ship.” But I think we were both onboard an hour and a half after we left or so.

Wolber: And then they treated us to some more home cooked, regional food, some schnitzel, some goulash soup. And just when you thought you couldn’t eat anymore you proved yourself wrong.

Ralph: So wrapping up the Moselle for me, I think from having experienced many of the rivers in Europe, I think nearly all of them, for me, this is…The Moselle is my favorite river. I think it’s the most beautiful in all of Europe. The Douro comes close. But for me…Moselle is number ones.

Wolber: Yeah. The Moselle is special. I fully agree with you. Fully agree.