Europe has more navigable rivers than any other region in the world, and arguably more diverse cultures along its river banks than almost any other region. Cruising the entire length of the Rhine, Main and Danube rivers alone—made possible thanks to the Main–Danube Canal—exposes travelers to 10 countries. Along the way are charming villages, fabled cities, fairy-tale castles, vineyards and more—all accessible from your floating hotel. However, this is far from the only inland artery. Germany also boasts the Moselle, Neckar and Elbe rivers, while France showcases the Loire, Seine, Saône and Rhône, and these are but two countries. Then there are rivers that even intrepid travelers may have never heard of: the Marne, the Guadiana, the Guadalquivir, the Dordogne, the Garonne, the Sarre, and Italy’s longest river, the Po, largely unnavigable because of low water levels and sediment. And that’s just the rivers. There are also many canals, which brings up an issue that those choosing river cruises often confront. 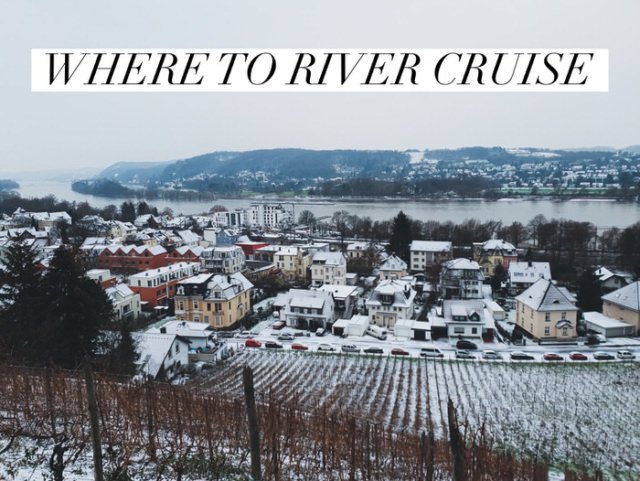 In what follows I attempt to give you a sense of the waterways made available to you through river cruising. Hopefully this will help you set your sights on a river cruise that’s right for you. If you’re anything like me, every river offers its own intrigue, so even armed with information you might find it difficult to decide. Take a deep breath, and know that this doesn’t have to be your only river cruise. Once you do your first river cruise, you’ll want to return to do more.

The Upper Danube, Main and Rhine

Out of the many famed European waterways, there’s a trio that I celebrate as The Three Tenors: the Rhine, Main and Danube rivers. Itineraries incorporating all of these waterways harmonize just as beautifully as the aforementioned singers, with so much of Europe viewable from the railing of a river cruise. Scenic beauty is the stuff of legends, past fairytale villages and into the epicenters of capital cities alike. From trading posts to water-powered factories, these rivers have long served as the lifeblood of this western continent. That being said, it’s important to mention something: River cruising views aren’t always that of the Monet and Rembrandt variety. Factory smokestacks often greet your arrival instead of castle turrets and fortress walls. This is something that shouldn’t serve to dissuade you by any means, quite the contrary, but understand that given the cultural clout of these destinations, some river cruisers visiting the city must dock in an industrial port more suitable for loading and unloading gravel and grain than river cruise passengers. While that might be contrary to the gloss and glamour of ocean liner terminals, it also encapsulates the essence of river cruising: you are being delivered to culture’s doorstep, where locals coexist with visitors and life unfolds before you.

This quartet of rivers possess a little less vibrato than The-Three-Tenor types I covered in the Famous Trio section: The Upper Danube, Main and Rhine rivers. Albeit slightly less heralded, the Seine, Moselle, Rhône, and Loire rivers still prove to be popular contenders in the world of cruising inland waters. Given the free-flowing nature of rivers, compartmentalizing them for the sake of highlighting corresponding cruises is next to impossible, with many itineraries combining them with popular bedfellows. Others, like the Loire stand alone, with navigational hurdles such as shallow waters impeding transit by the masses. I think these rivers are the ideal choice for travelers who’ve already cruised the Danube and are seeking something different, are wine aficionados and/or appreciate unadulterated nature and a slower pace.

This title might not be apropos, because anyone who has sailed the Lower Danube, Garonne and Dordogne, Douro, Volga or the Italy’s Po are singing the praises of these incredible waterways. While itineraries here are quickly gaining recognition, they often make only cameo appearances in glossy river cruise brochures donning cover shots of ships sailing past the capital cities flanking the Danube and Rhine’s cornucopia of castles. These rivers (along with a litany of others like the Guadalquivir, Marne, Sarre, Oder, Sava and Tiza–just to name a few!) make their way onto the bucket lists of intrepid travelers who have cruised the major rivers and are looking for clandestine river ports. Or for those who prefer a more pioneering approach to travel.

Don’t get me wrong, not all of the places cruises frequent on these rivers are obscure locales. Quite the contrary. For instance, the Lower Danube delivers you to ancient Eastern European empires in Romania; Garonne and Dordogne itineraries take you to the heart of Bordeaux and France’s most popular vineyards; the Douro is the lifeblood of Portugal; and the Po trickles past Venice. The Volga also happens to be the longest river in all of Europe, by far. However, the rivers cruises here are far and few between and veer off the trodden river cruise course—and as a result slightly less in demand.

While river cruising is the more common type of experience that travelers seek, canal cruising represents some of the best travel experiences available on the European continent. These watery inroads are often no more than 40 feet wide and take you to quiet villages and small towns. You’ll feel as though Europe has opened its closely guarded vest to reveal its most cherished possessions. Plus, that intimacy translates to the onboard experience, too, with barges being the only means of transit, capable of carrying no more than 25 people on average—sometimes as few as three couples!

Foregoing on the need for spacious interiors opens up a world of new possibilities, too—with more than 5,000 miles of canals in France alone.

Sailing these canals takes lots of time, as you pass through many locks that can take as long as 20 minutes to transit. But barge cruising is meant to be relaxing, and if you get bored, just hop on a bike or walk to meet the barge at another lock upstream.

Out of all types of cruises, I find canal cruising to be the most foreign to North American travelers. My fondness for this type of travel is undeniable, but I understand that this much more discreet form of cruise travel isn’t everyone’s idea of the perfect vacation.