The Douro, The River of Gold, is Portugal’s gift to river cruising. Viking Cruises is bringing its formula of absolutely top-notch explorations, accommodations and Nordic hospitality to a Douro fleet that now numbers four vessels. We were invited aboard the newest of these, the Viking Helgrim, launched this past March. 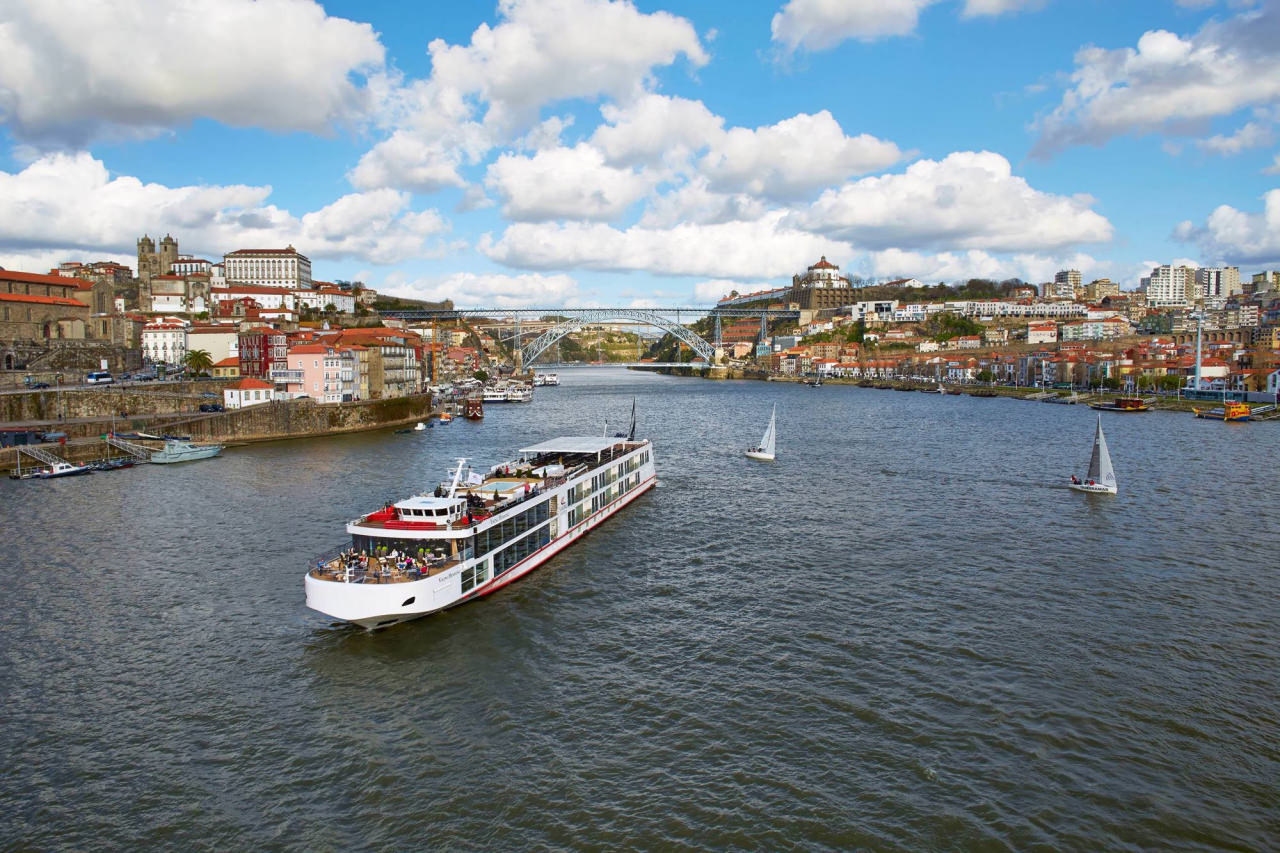 Veteran Viking River cruisers will recognize the ship as one of Viking’s own but with several key differences. Sleek, glass-walled and three decks high, their interiors match those on Viking’s Longships sailing the rivers of Europe. However, these are ‘baby’ longships. The Douro River is only navigable thanks to a series of locks of precisely the same length and width. These dictate the maximum size of each vessel. 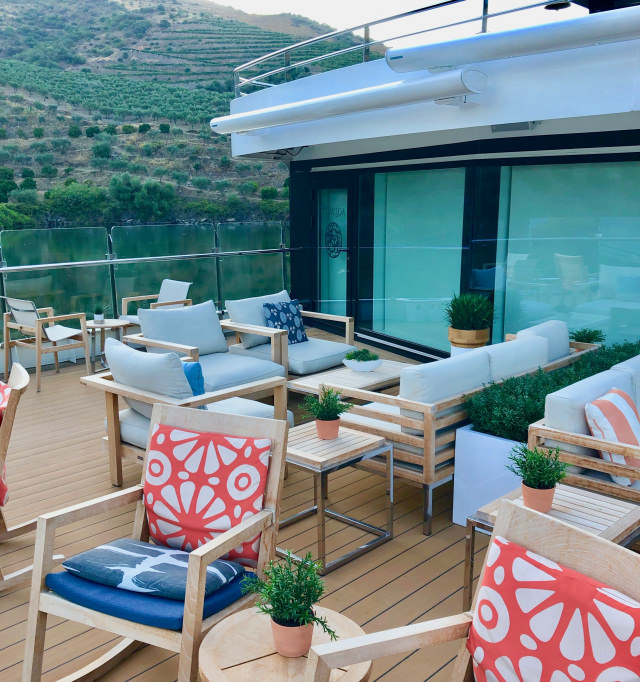 The Helgrim and her sister ships are 262 feet long and 37 feet wide, the largest possible size the locks can handle. Compared to the Longships at 443 feet long and carrying 190 passengers, the Douro ships carry just 106. Aside from their length, other differences include a snub-nosed bow that serves as the outdoor Aquavit lounge on Deck 3. The Aquavit also differs in that it is not the outdoor restaurant found on its longer cousins. Instead, it provides a great vantage point, immune from the frequent times the entire sundeck is ‘collapsed’ to sail through the locks. The staterooms too lost 25 square feet in size—most notable on the balcony. However, even two notorious over-packers were able to stow away their entire 8-day wardrobes in the storage provided. 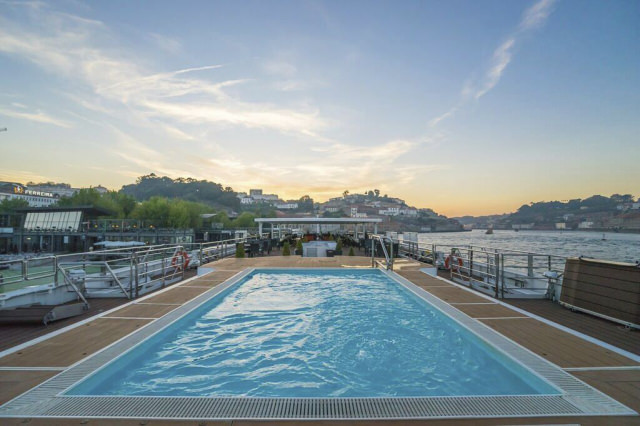 The most exciting difference on Viking Helgrim is the addition of a sun deck swimming pool. One of the rules governing the Douro is that no sailing can be done at night. This means that at least part of virtually every day on the Douro passengers watch the spectacular landscapes pass by – often from the dunk pool itself.

Viking’s Douro River Cruises start with a full two days in Lisbon, Portugal’s capital city and an increasingly desirable tourist destination. The beautiful city is built on 8 hills but lays claim to 7, modelling itself after Rome. It’s a wonderfully colorful city filled with buildings clad in Portuguese tiles, tumbling down hillsides traversed by picturesque Street Cars. Viking puts passengers up in a central, four-star hotel.

The next day, Viking’s included tours begin lessons in Portuguese history, culture, and gastronomy that have made Viking the choice of the lifelong learners it attracts. Then on the third day, a caravan of Viking-emblazoned coaches sets off for Porto where Viking Helgrim awaits. Replete with Wi-Fi that worked beautifully almost everywhere, these restroom-equipped coaches would be our land tour transportation throughout our cruise.

Before Porto lies the extraordinary university town of Coimbra. On the journey there, our local guide punctuates his talks with stories about everything from Portuguese tiles to Portugal’s agriculture, maritime history, folklore and surprising facts.

Did you know J.K. Rowling married a man from Coimbra, lived there, and based her Gryffindor robes on Coimbra’s student garb?

In late afternoon we arrive in Porto to the waiting Viking Helgrim. The Douro River extends from this seaport, the country’s second largest city, Porto, to the Spanish Border.

The city is most famous for its role in the creation of its namesake wine, Port. The Douro Valley contains an extraordinary wealth of wine growers. There’s a wonderful history of the time before the locks were built when men risked their lives and their livelihoods bringing barrels of wine to the port-makers cellars in flat-bottom boats. Now, tanker trucks do the job and the Douro has become one of the most popular rivers for cruising.

What separates the Douro itinerary from most Viking river cruises, is its single-country focus. With the exception of a wonderful one-day dip into Spain’s magical city of Salamanca, this trip is all about Portugal. The shore excursions have a heavy emphasis on wine, offering everything from tastings to allowing passengers to blend their own port. There’s even an excursion to the palace that makes up the label of “Hey Hey Hey, Mateus Rosé.” 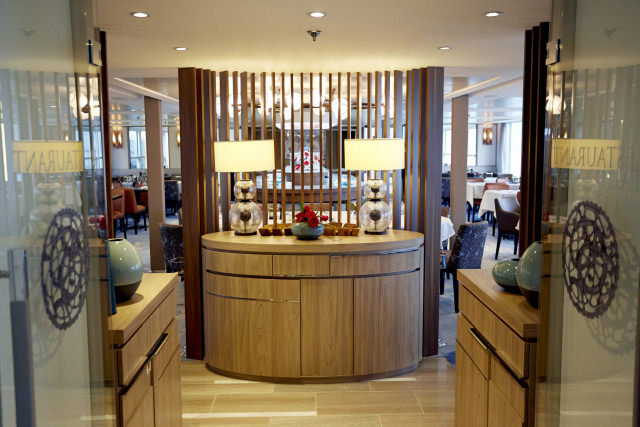 Every daily menu contains Portuguese menu offerings in keeping with Viking’s goal of offering a starter, a main course and a dessert representing the ports being visited. The movie-star-attractive Executive Chef, Peter Benko is Granny-taught. His home is in Hungary where he spent a boyhood astonished at the output of his grandmother’s kitchen. She cooked for ten family members daily until the age of 83. Chef Benko operates in a kitchen 7 meters by 11 meters—23 feet by 36 feet—with a kitchen crew numbering six. The output is extraordinary. The Chef loves to make soups. And, because he found fresh apricots in a local market, he made Apricot preserves—so perfect at breakfast but also a wonderful accompaniment to the Cheese Platters of the menu.

Aside from the local menus, which I highly recommend, there are Viking classics like its Chairman’s Salmon and the steaks Americans can’t seem to live without. Every night, just before the daily Port Briefing, the Chef appears to give his overview of the night’s meal. My suggestion? Listen to the man; he knows what he cooks.

The final component in this magical itinerary is one we least expected. It was extraordinarily good fun. Nightly activities in the lounge drew a crowd that on one occasion formed a Conga line that ran through the room, out onto the deck and back in again. There was an optional picnic held in an Olive Orchard. As we headed to the resort whose owners had hosted the picnic, the entire crowd burst into a singalong to accompany some old disco music. There were local Flamenco dancers, singing groups, musicians and our fellow 106 passengers, a large number of whom we were terribly sorry to say goodbye to, as we ended our cruise back in Porto in magical, memorable Portugal.