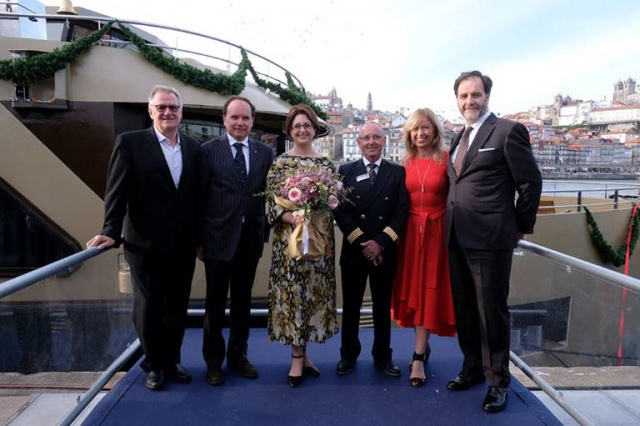 Following a long-standing tradition associated with ship christenings that originates more than 4,000 years ago, a priest blessed the ship and crew, and Captain Pedro Sardo assisted as Godmother Lo Bue-Said broke a champagne bottle against AmaDouro’s hull, signifying good luck on the journeys ahead.

Reflecting true “AmaFamily” values, Schreiner and Karst surprised their first British godmother, who was accompanied by her husband and youngest son, by flying in her eldest son for the ceremony.  Guests joined in the festivities, which included speeches by Schreiner, Karst, and Lo Bue-Said, lively local entertainment featuring folk dancers and fado singers, regionally-inspired cocktails, and a gala dinner.

Joining sister ship AmaVida which sails between Porto and Vega Terron, AmaDouro will be based in Porto and offer seven-night roundtrip Enticing Douro cruises with a three-night pre-cruise land program in Lisbon. AmaDouro is the first of three new ships that will be added to AmaWaterways’ fleet this year. Other new ships making their debut include AmaMora, sister ship to AmaLea and AmaKristina, sailing on the Rhine, and the AmaMagna on the Danube.