A few weeks ago, I wrote that the food aboard AmaViola was wonderful, and about dining at the captain’s table. But I feel like I need to get more in-depth about dining aboard AmaWaterways, because meals with AmaWaterways are more than meals, they are experiences – and my experience was great. 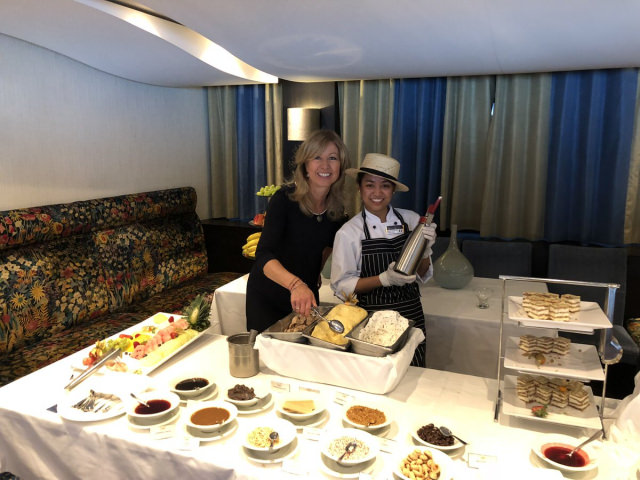 Now, I will say that I am not, in any capacity, a food enthusiast or someone who has a lot of knowledge about food. What I will say, however, is that I have had many dining experiences throughout the years, on ships and land, and have developed a (fairly) sophisticated palate. And although I may not know a lot about food, my opinions about the dining experience aboard AmaViola match what I heard from other guests.

Before we talk about food, I will talk about the most wonderful part of each dining experience I had aboard AmaViola – our Maitre ‘D, Laszlo Dicse. Laszlo always had a smile on his face, and worked with each of his staff to make sure that everyone in the dining room was taken care of. 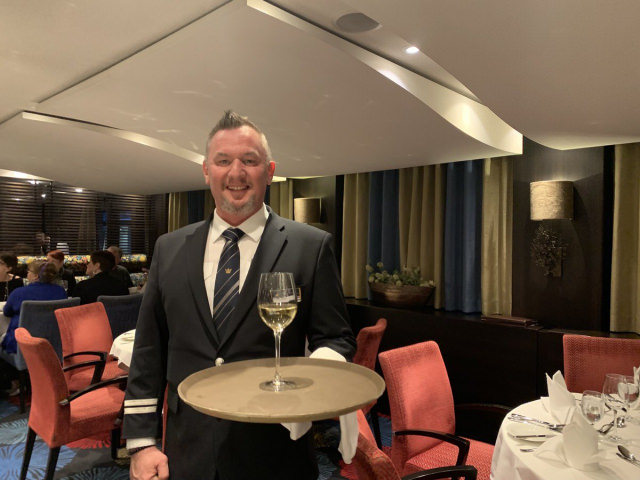 Laszlo Dicse, or as some of our guests called him, Mr. Fantabulous. © 2019 Britton Frost

Each night after dinner I took a picture of the menu, (mostly because I forgot to do it during dinner because I was so eager to eat.) But after two days, he just started bringing the menus to me without any prompt. It’s the touches like these that make the Ama experience so special.

Apart from Laszlo, though, the entire staff was professional, kind, and attentive. So attentive in fact, that my wine glass seemed to be magically refilling itself while my back was turned.

Dinners were long, but not drawn out. They provided a venue to catch up with other guests about what each of us may have missed during the day. As someone who is used to eating one-course meals at home, the multi-course dinner could sometimes be a bit much. Many guests skipped certain courses in the meal. I, however, opted for a light lunch to save room for dinner. 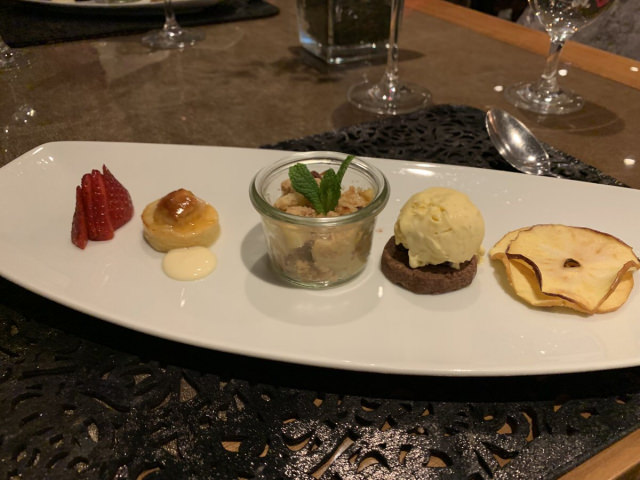 The presentation at Chef’s Table was beautiful. © 2019 Britton Frost

AmaWaterways also has another dining option for guests – Chef’s Table. Chef’s Table features a tasting menu with many courses. I consider myself to be a fairly adventurous eater, but there are three things in the food world I do not like – eggplant, fish, and cooked peppers. Two of three of those things were on the menu at Chef’s Table. I managed to eat the dishes and enjoyed all of them, some more than others. But even not liking eggplant or fish terribly much, there was nothing that I wanted to stop eating or pass up. I dined with a pair of self-proclaimed “foodies,” who were extremely impressed throughout the meal.

Not only was the food at Chef’s Table wonderful, but it also provided a bit more of a formal environment than the main dining room. Chef’s Table strives to be a bit more experimental with its dishes, but more formal in presentation. Small details like dishes being placed in unison by multiple members of the waitstaff are what elevate this dining experience. I would highly recommend the Chef’s Table for anyone who sails with AmaWaterways. After all, it is included in your cruise fare. All you need to do is make a reservation.

If you have a picky eater, though, AmaWaterways has an “always available” section on the menus. This allows guests to order things that they know and like, night by night. Food items include chicken breast, caesar salad, steak, and more. Another segment of the menu titled “Healthy Choice” shows guests the healthiest options from the main menu that night – including dessert. 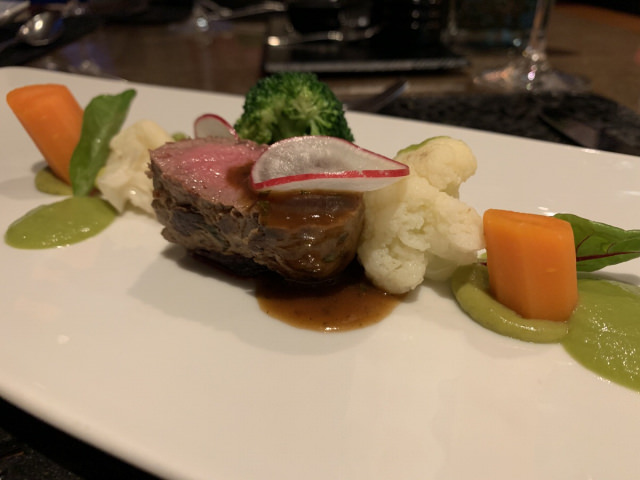 I, however, found myself gravitating toward one part of the menu more than others. The “Chef’s  Recommendation” section of the menu always rung fairly true to what I was going to order, so after the first two nights on the trip, I stopped looking at the menu and just took the Chef’s Recommendation all the way down every night. After all, who knows what to eat better than the chef?

Apart from these special sections of the menu mentioned earlier, there is also a section called Vegetarian Recommendations. That one seems fairly self explanatory. AmaWaterways also prepares gluten-free meals and snacks. Keep in mind that you can disclose any dietary restrictions to the cruise line before your sailing, so the dining room staff can accommodate accordingly.

While dinners aboard were great, I was equally impressed by the lunches offered. Lunch consisted of a buffet that was sometimes, but not always, inspired by the region we were in. In Germany we ate German sausages, which happened to be one of my favorite lunches aboard. But there were also offerings from other parts of the world, such as Indian food and pho.

Although this may seem like an odd inclusion, I think that it enhanced the dining experience at lunch. On the days that regional items were not offered on the buffet, they were offered on the menu. That is most likely due to the fact that certain food items just do not do well in a buffet. 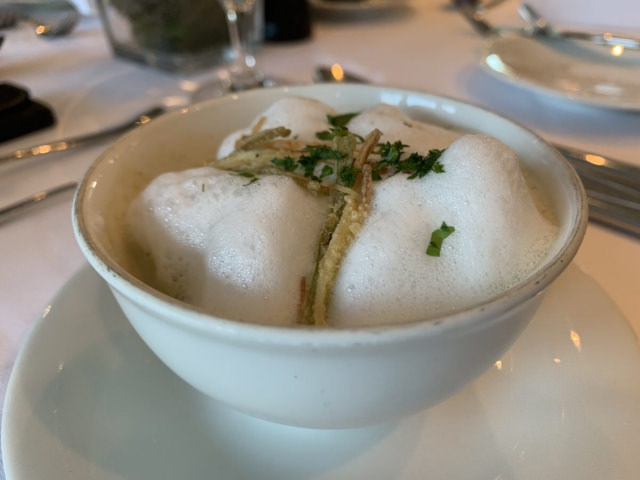 Soup was my favorite part of every meal. I wish I could eat this broccoli cream soup every day. © 2019 Britton Frost

Lunch provided so many great and diverse options, but my lunches stayed fairly consistent throughout the sailing. Because dinner could be a lot of food, as I said earlier I am used to eating one course meals when I am cooking for myself, I usually took a light lunch. On the menu there was always a soup available, which quite honestly was my favorite part of any meal we had aboard, and there was a salad station at the buffet. Generally I would get my salad, order a soup and a beer, and eat quickly so that I could continue on with my day.

Breakfasts also consisted of a buffet. I am not a huge breakfast eater. Usually my breakfast consisted of either a yogurt with fruit, or a few vegetables and a pieces of cheese. For those who prefer an American breakfast with eggs and bacon, that was always available. 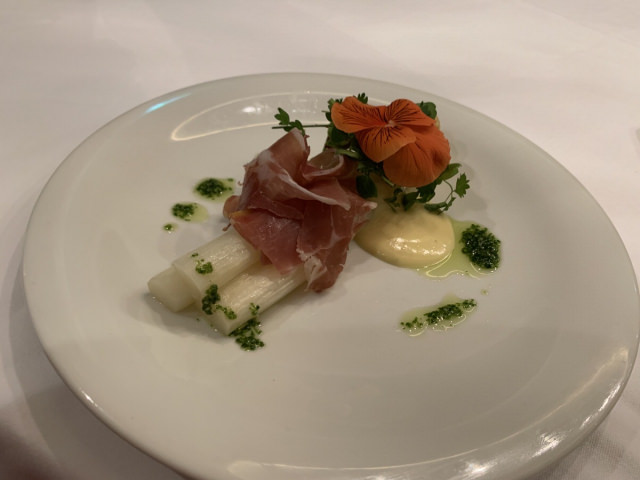 Not breakfast – but one of the best dishes we had aboard was white asparagus wrapped in prosciutto. © 2019 Britton Frost

Although I was impressed by all the food aboard, the dinners were always special. Not only were they a great time to reflect on my day with my fellow travelers, but they were also just prepared so well. So whether you’re in the main dining room, or at the Chef’s Table, I’m sure your dining experiences will be as enjoyable as mine were. 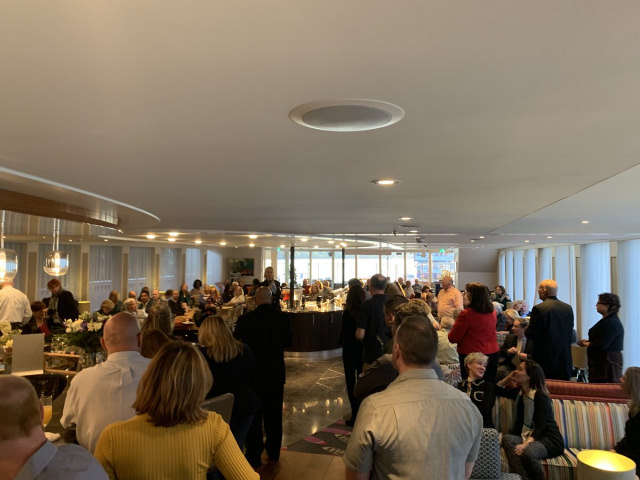 The Captain’s Farewell reception in The Lounge. © 2019 Britton Frost

Although dinner often could be long, many of us were looking for things to do afterward. With a bit of wine in my system, I was never quite ready to go to my stateroom to sleep after dinner. The lounge was the hub for post-prandial entertainment, with various performances and a house DJ and musician, but also before dinner with AmaWaterways’ complimentary cocktail hour, Sip & Sail.

Entertainment may not be something that you think about when considering taking a river cruise. On ocean cruises, there is often so much entertainment that you may fear that by going to something at night you are missing something that could possibly be better. On river cruising, everyone who chooses to go to the lounge after dinner and see the entertainers will get the same experience, and you’re not going to find anything better – because AmaWaterways entertainment is hard to beat.

The crowd favorite of the cruise was La Strada, a trio consisting of a guitarist and two violinists. They played so many well known modern and classical songs, including some from a favorite composer of mine – Vivaldi. There were also other singers, dancers, and musicians, including our house musician Anton.

Although I enjoyed La Strada’s performance so much, they came second to my favorite act – a singer named Lindsay Hamilton. Now, don’t get me wrong. I liked La Strada too, but Lindsay gave a unique experience that was more than just listening to music; it was about using the music to engage with each other. After each song ended I felt like I was at a stand-up show in a comedy club. Lindsay had everyone laughing and singing along. At one point she even went around to take selfies with guests while she was singing. It was something that I had never seen before, and it put everyone in such a good mood.

For those who prefer a private evening, each stateroom also features an entertainment center on an iMac. This allows guests to watch movies or surf the web. Many of the couples I traveled with opted to go to bed and watch a movie after a long day of touring.

Regardless of what you decide to do after dinner – whether it’s going to the sun deck to enjoy a walk or the fresh breeze as you cruise down the river, going out on the town where you’ve overnighted, returning to your stateroom to watch a movie, or going to the lounge to listen to music – there is something for everyone, even a 23-year-old like me.