This is the first of many stories that you’ll see here on River Cruise Advisor, as well as on Avid Cruiser, by Gene Sloan, who recently left his post as a travel writer at USA Today. 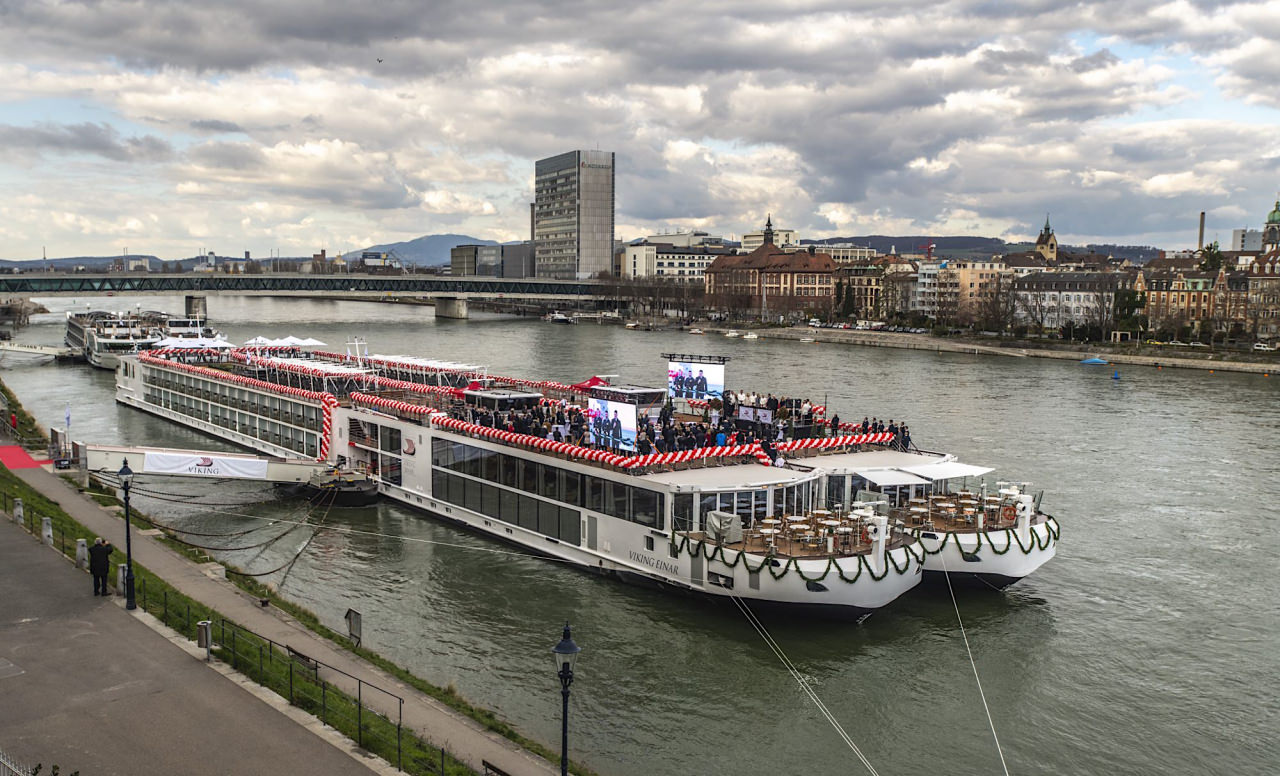 BASEL, Switzerland — The river division of Viking on Tuesday kicked back into growth mode with the simultaneous christening of seven new ships located at four different spots across Europe.

Hundreds of Viking employees and their families, including much of Viking’s management team, assembled for the hour-long event atop two of the newcomers that were docked in Basel, Switzerland – the home of Viking’s operations headquarters.

From there, they could see a live feed on a large video screen showing the rest of the vessels, which were split among two towns in Germany and one in Portugal.

The ships included Viking Einar and Viking Sigrun (the two ships in Basel); Viking Vali and Viking Tir, which were tied up at the mouth of the Elbe River in Brunsbuttel, Germany; Viking Sigyn and Viking Ullur, located at the shipyard in Rostock, Germany where Viking’s river ships are built; and Viking Helgrim, which was docked on the Douro River in Porto, Portugal. 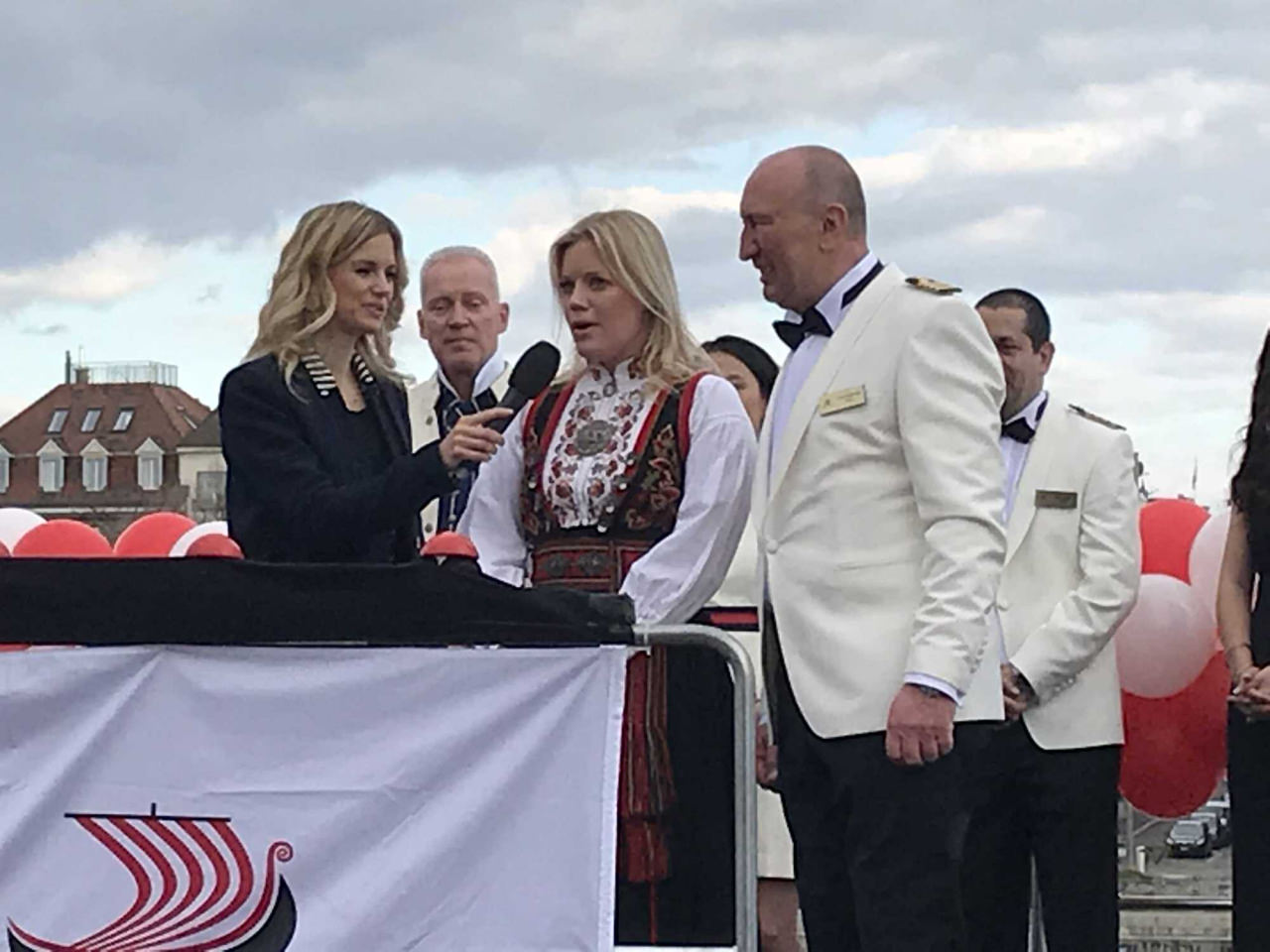 Godmothers for all seven of the vessels lined a stage atop Viking Sigrun during the event, which began with music from a trio of alpenhorn players. They then took turns pressing red buttons to trigger the smashing of bottles of Gammel Opland aquavit against the hulls of the ships. The use of the traditional Scandanavian drink was a nod to the Norwegian heritage of Viking’s owners.

All of the godmothers had ties to the company. They included Gisela Ruckert, part of the onboard operations team at Viking’s office in Basel; Rikke Semb Pertile, the company’s senior manager of ocean entertainment and enrichment; and Linh Banh, executive vice president of financial planning and analysis. 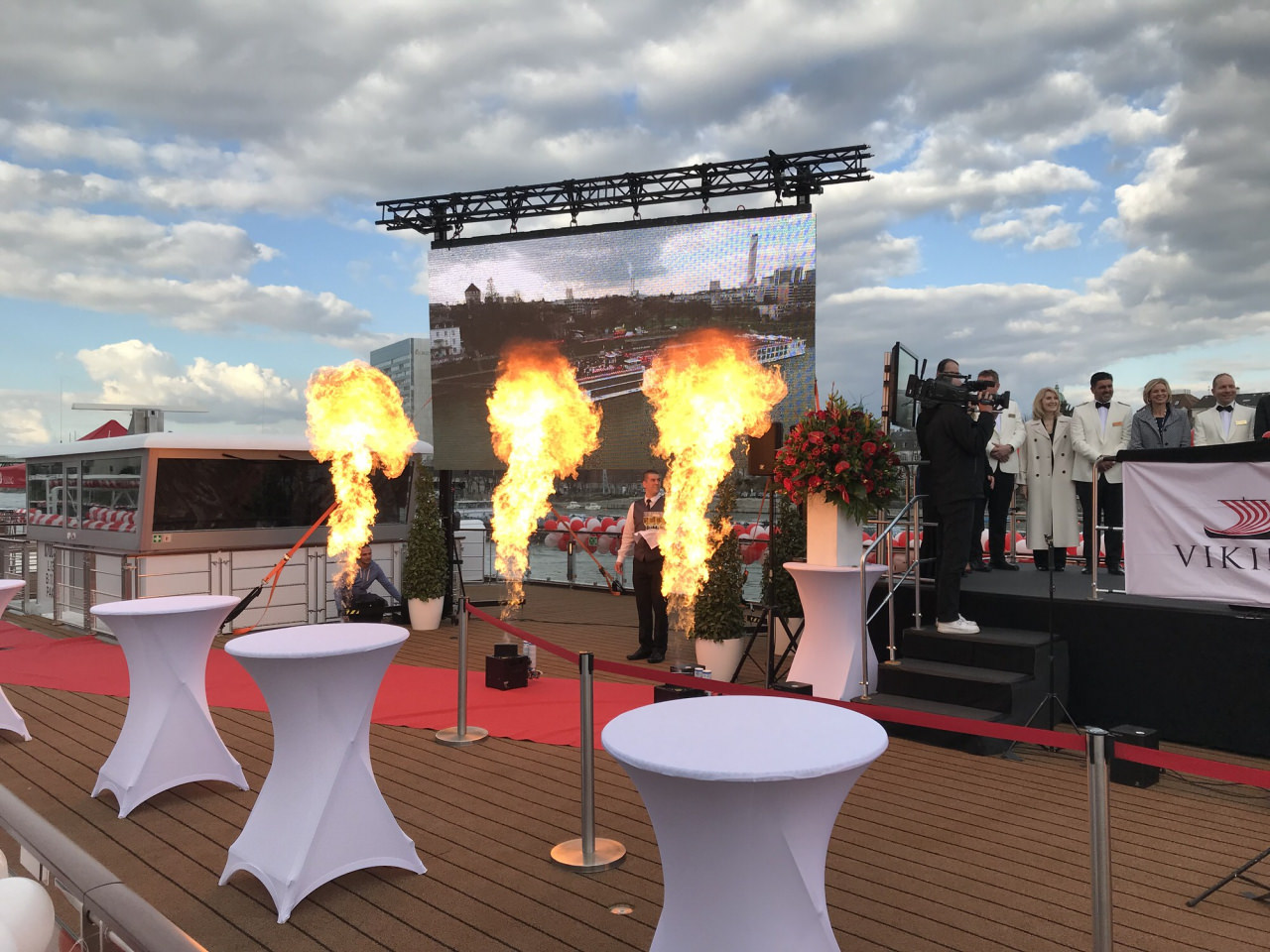 Also on stage to serve as godmothers were Minxuan Zhao, who aided Viking in designing ships for the Chinese market; Natalia Hofmann, the wife of Viking executive Tony Hofmann; Wendy Atkin Smith, a managing director at the line; and Leah Talactac, the company’s executive vice president, group controller and chief accounting officer.

“We have tended to look far and wide (for godmothers),” Viking chairman Torstein Hagen noted during a short speech that praised the company’s staff. “On this occasion, we did it slightly differently. We said, ‘let’s think about who is making this company what it is.’”

Hagen often says his vision for Viking is of a company with “great employees, great guests and happy shareholders,” a phrase he repeated at the event but with an added emphasis on the importance of great employees.

“I think the main thing we have is we have great staff,” he said. 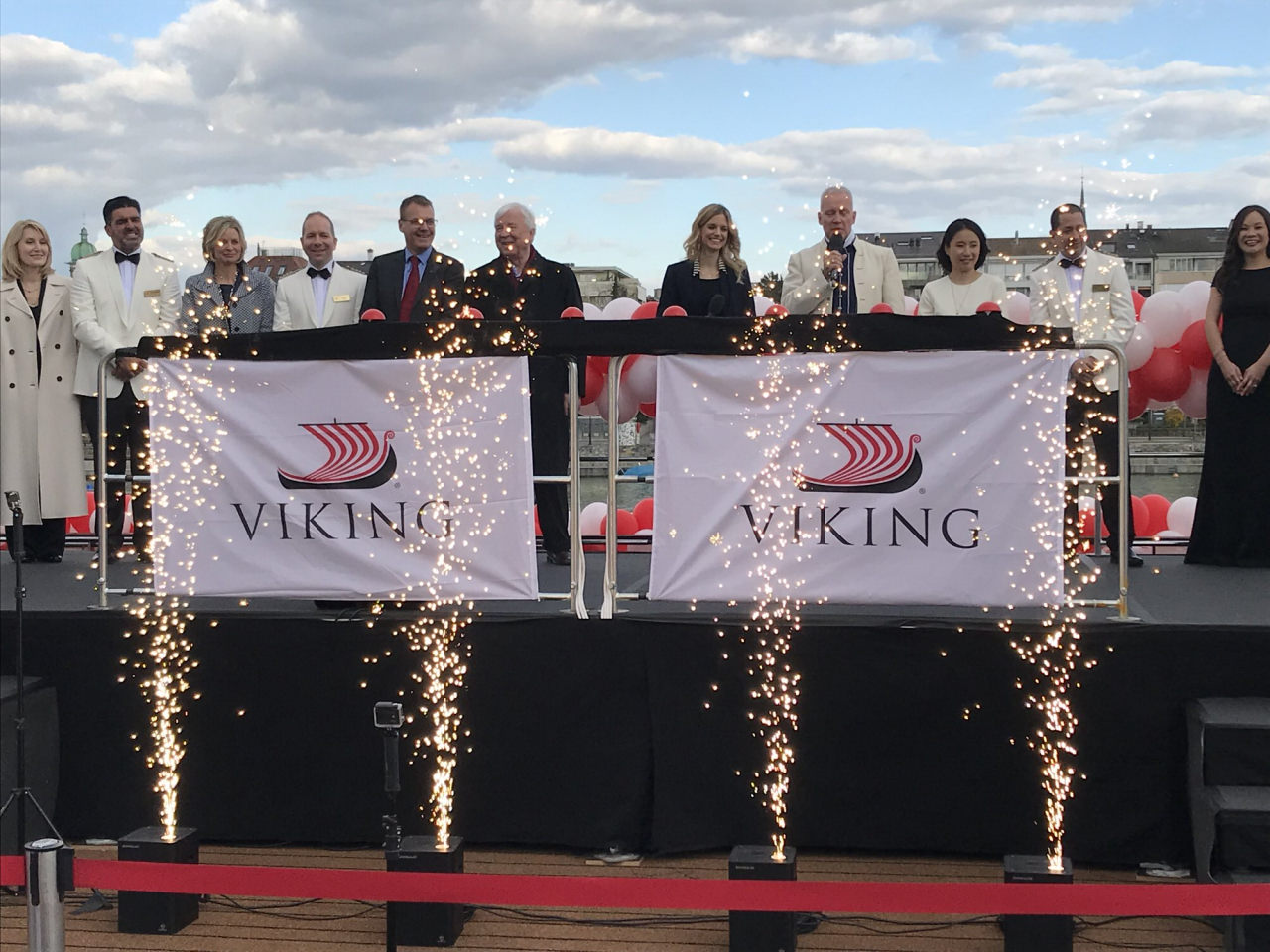 As they pushed the buttons to trigger the bottle smashes, each of the godmothers recited a traditional maritime blessing.

The outdoor event was followed by a gala dinner at the Basel-area museum Fondation Beyeler. It included a private viewing of a Picasso exhibit and performance by 14-year-old composer, violinist and pianist Alma Deutscher.

The debut of seven new ships at once marks a return to the heady days of growth that Viking’s river division experienced earlier this decade. In an unprecedented expansion, Viking rolled out 36 new river ships in Europe during 2014, 2015 and 2016 before slowing its growth rate considerably over the past two years. It added just two ships in Europe in 2017 and none in 2018.

All but one of the newly named ships are of the “longship” design that Viking first debuted in 2012. With a capacity for 190 passengers, the vessels boast an innovative configuration that includes some of the largest suites ever for a river ship in Europe as well as cabins with balconies, a feature made possible by an unusual cabin area layout that includes offset main corridors.

The only new vessel that isn’t a longship is the Douro River-based Viking Helgrim. While similar in style to Viking’s longships, it is significantly smaller and holds fewer passengers, a nod to navigational requirements on the Douro.

Including the seven newcomers, Viking will have 72 vessels operating in Europe this year, more than the next three largest North American-focused river lines combined. The company pulled away from its rivals in size during its rapid expansion earlier this decade. 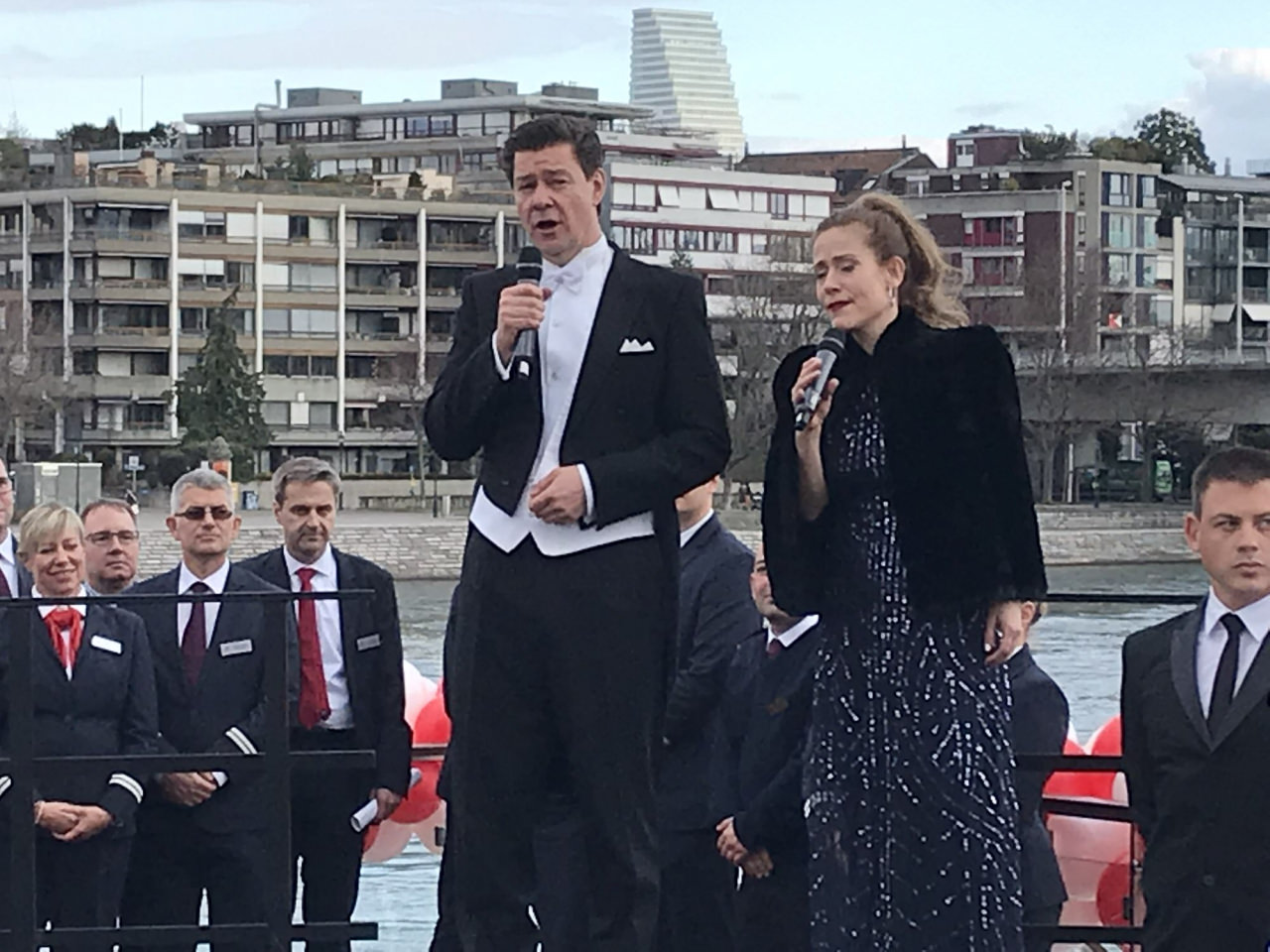 Viking now accounts for 49% of the North American market for river cruises, Hagen said Tuesday at a press conference before the event. The next largest operators – AmaWaterways, Avalon and Uniworld – have an 10%, 9% and 8% share of the market, respectively, he said.

Viking already has announced plans for seven more new river ships that will debut in 2020. They’ll include two more longships that will sail on Europe’s Rhine, Main and Danube rivers and four new vessels specifically designed to sail on the Seine River in France. The seventh new ship will be a custom-build vessel for the Nile River in Egypt. Viking executives say it’ll be the first built-from-the-ground up new Nile River ship to debut in years.

Over the past four years, Viking also has expanded into ocean cruising. It now operates six new ocean vessels with six more under construction. Founded just 22 years ago, Viking now has over 9,000 employees and carries more than 500,000 passengers a year.