On March 19, 2019 the Schmitter family inaugurated the MS Amália Rodrigues in Porto with Portuguese and French personalities, partners, and national and international journalists in attendance. 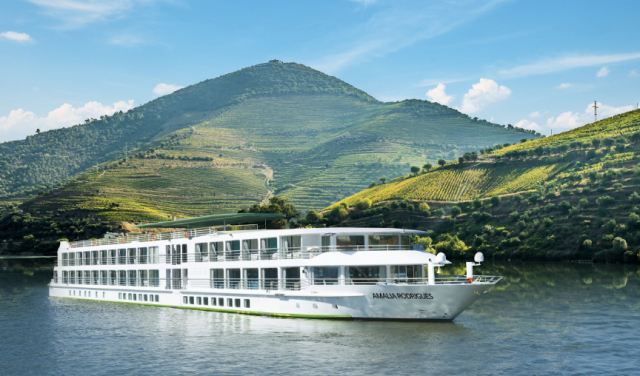 The godmother of this ship is Dr. Maria Alexandrina Quaresma, representing the Amália Rodrigues Foundation. Amália Rodrigues was known as the “Queen of Fado” thanks to her exceptional voice, she was instrumental in popularizing fado music worldwide. She was also one a cultural ambassador of Portugal and her voice earned her international acclaim.

The ship’s godfather is Dr. Marco Martins, mayor of the city of Gondomar, which regularly welcomes ships from CroisiEurope to its port.

On March 20, the ship departed Porto for its inaugural cruise on the Douro, with stops in Porto, Regua, Pinhao, Vega de Teron, and Barca d’Alva before returning to Porto.

Built at the Meuse and Sambre shipyard in Namur, the MS Amália Rodrigues is the 6th ship to join CroisiEurope’s fleet on the Douro and its third premium rated ship on the Golden River.

Furnished and decorated by CroisiEurope’s interior designer, the MS Amália Rodrigues has a contemporary feel, featuring colors and shapes of the Mediterranean along with plenty of natural lighting and open spaces.

The three-deck ship measures 262.5 feet in length and 37.4 feet in width. The ship can accommodate 132 passengers in 66 double-occupancy cabins, including 4 suites, of which 2 are on the upper deck and have terraces. There is also a cabin for guests with reduced mobility.

All cabins are air-conditioned and are equipped with twin/double bed, private bathroom, wardrobe, flat screen television, hairdryer, and safe. The 58 cabins on the middle and upper deck have French balconies with large windows. There is also a spacious lounge, a panoramic restaurant, a shop, a large sun deck with sun loungers, and a swimming pool.

From April to October, the MS Amalia Rodrigues will offer cruises on the Douro, from the Atlantic Ocean to the Spanish border. The ship will cruise 6- and 8-day itineraries through the Douro Valley, one of the oldest demarcated wine regions in the world.

All-inclusive prices start from $1,554 per person for a 6-day cruise round trip from Porto and include onboard accommodation, all meals, and drinks as well as entertainment and a gala evening.