My quest to find cheap business class tickets to Europe began with a search on Google Flights. $10,085. That was the lowest rate quoted for two of us to travel in late May Asheville-Venice, round trip, all business class. And though my trip was for an ocean cruise, I use similar strategies for my river cruises. 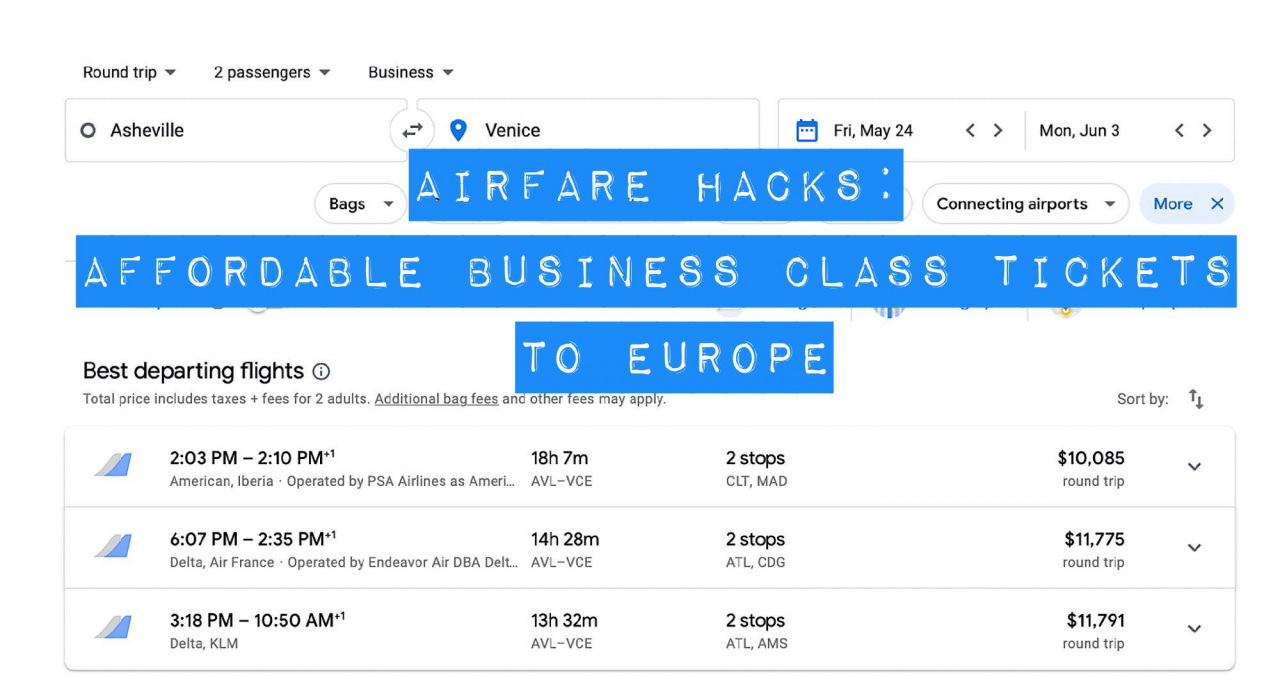 $10,085. So much for cheap business class flights. How did traveling in comfort become so expensive? There were cheaper business class flight deals on United ($7,840 for two of us), but those flights required long days of travel, an overnight in Zurich, and the cost of the hotel room for that overnight. Plus, United does not offer business class from Asheville. At age 61, and at 6’4”, having crossed the Atlantic more than 50 times in my 40 years of travel writing, economy class, with its 30-inch seat pitch, did not interest me in the least – even if it were only a 90-minute flight to get from Asheville to a major gateway.

I know all too well from experience that my knees dig deeply into the seat in front of me when seated in economy. It’s a grueling eight hours across the Atlantic, and an even more grueling ten hours back. Causes of the potentially fatal Deep Vein Thrombosis have been attributed to long hours of immobilization in economy class. The airlines, it has always seemed to me, reached back to The Grand Inquisitor’s instructional guide when configuring their economy seats. 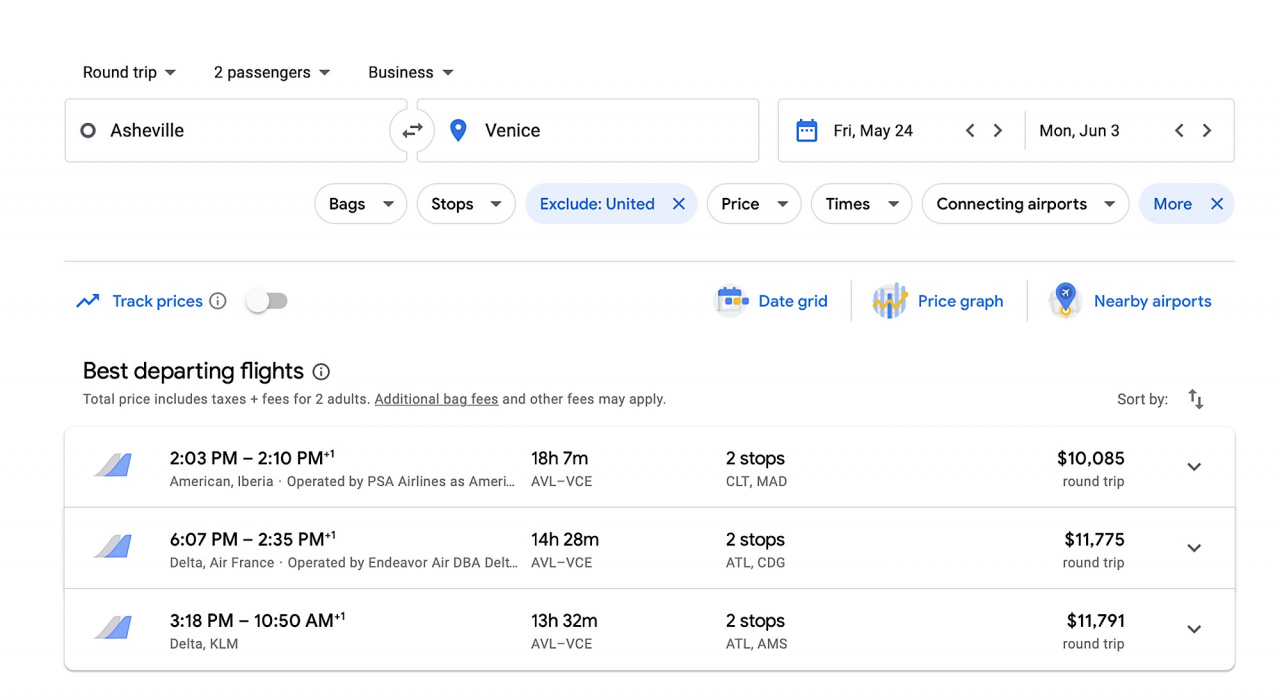 My initial search to find cheap business class tickets: more than $10k for two of us to fly in comfort.

Premium economy was an option, of course, and on some of my international travels I’ve had good experiences with premium economy, especially on Air France. But I wanted a business class seat all the way. With some creativity, I knew I could find better business class airfares than the initial one quoted. I did; saving $4,489. And boy did I get creative.

My Quest For Seats In Premium Cabins

My end goal? To be in Venice in late May for a Backroads bicycling adventure combined with an Adriatic cruise on Ponant. A few years ago, I did a Backroads bicycling program combined with a Danube river cruise on AmaWaterways. That was a great trip, and I have high hopes for the upcoming one on Ponant to be equally as great. We’ll be cycling and cruising for seven days along the Adriatic/Croatian coast.

For the upcoming trip, I knew that I wanted to arrive in Venice free of jet lag, and with my luggage, which means arriving in Europe a few days before the cruise. Arriving early not only allows you to slough off jet lag, but also allows your luggage to catch up with you should there be a missed connection. Checking fares Asheville-Venice for multiple dates, however, yielded figures that had as many digits as my zip code. Uh-uh. I wasn’t about to hand over that much money.

I began using a combination of Google Flights, and checking award travel on American, Delta, and United, as well as Lifemiles – a good program when it works. I’ve used Lifemiles for about a decade to obtain business class award fares for less than $1,000 each way across the Atlantic. For the dates I wanted this time, however, Lifemiles showed no availability between Asheville and Venice in business class. 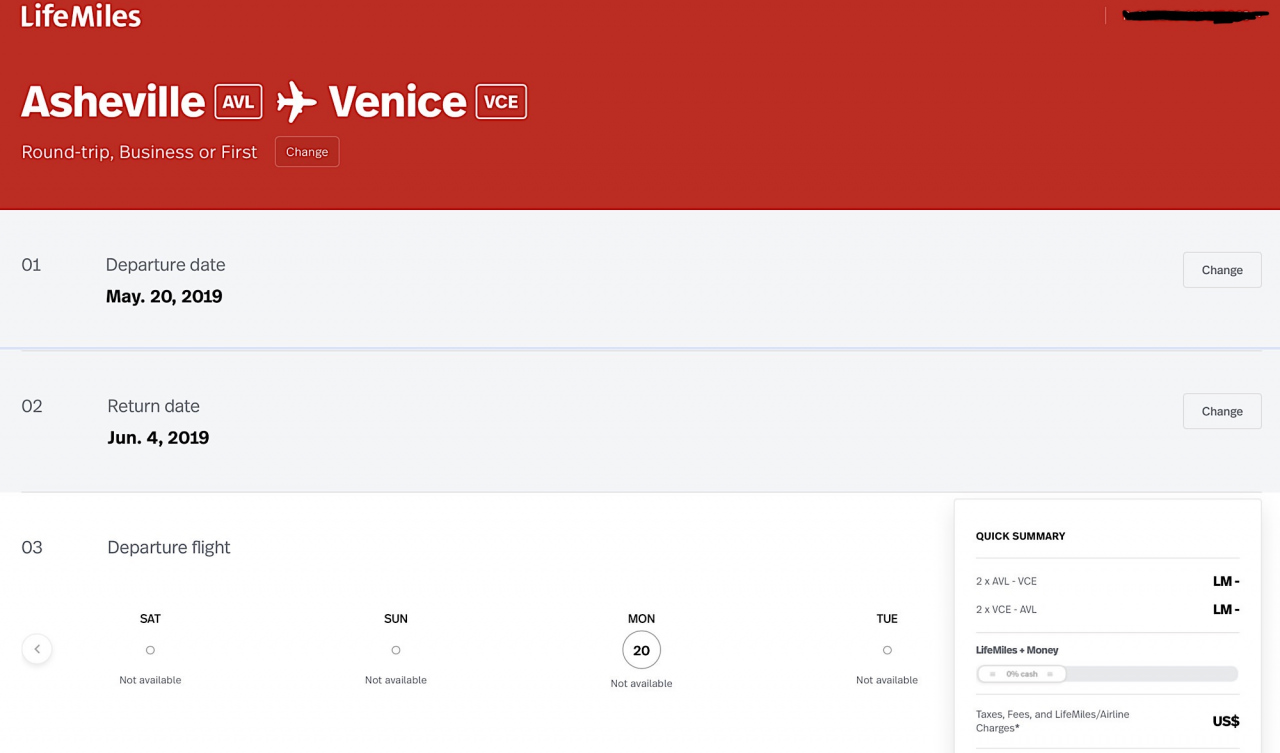 I also checked the price of international flights and award options through the credit card companies with whom I have accumulated points. Both Chase Sapphire Reserve and American Express Membership Rewards programs sometimes have bargain flight tickets.

With the Chase Sapphire Reserve card, points are worth 50 percent more when you redeem them for travel. For example, 100,000 points are worth $1,500 when redeemed for through Chase Ultimate Rewards. It’s too much to explain how the program works in this post, so I’ll cover that in a future article.

Not quite as valuable as Chase’s Ultimate Rewards, American Express’ Membership Rewards provides so-called Insider Fares, which gives you 1.1 cent per point rather than the standard 1 cent per point.

I had no success booking business class between Asheville and Venice with either program.

I did one other search. La Compagnie is a business class airline with cheap flights between New York, Nice, and Paris. We’re talking fares sometimes as low as $1,300 roundtrip. The challenges with La Compagnie were 1) getting to New York, and 2) getting from Paris to Venice – and back. I could do better than having to piece together a trip this way.

Still Searching For Those Cheap Business Class Tickets To Europe

Let’s step back to assess for a moment. I am a demanding customer. I want Business and First class all the way, which is not easy from Asheville. On United, the two-hour flight to Chicago and the 90-minute flight to Washington is in economy only. No thank you. American and Delta offer First Class to Charlotte and Atlanta, respectively.

That settled, I began to search American and Delta. Business class fares for the latter made me audibly gasp, more than $17,000 for two. Sorry Delta, you’re not that good. I quickly exited Delta’s website and began searching American’s website instead. What I found there was much more palatable, but it required a circuitous routing. That was okay with me.

What I eventually stumbled upon was a routing through Copenhagen for around $2,800 each, business class all the way, and with the added benefit of getting to shake off the jet lag by spending a few days in a region where I lived for nine years, Denmark and the south of Sweden. In fact, for $4,000 less than the cost of the cheapest Asheville-Venice business class ticket I could find (and for only a few hundred more than the cost of an economy class at $1,900 roundtrip), I’d be adding five nights in Scandinavia along with all expenses, including hotels, train travel, and meals. There would be a cost to get from Copenhagen to Venice, which I will get to in a moment. 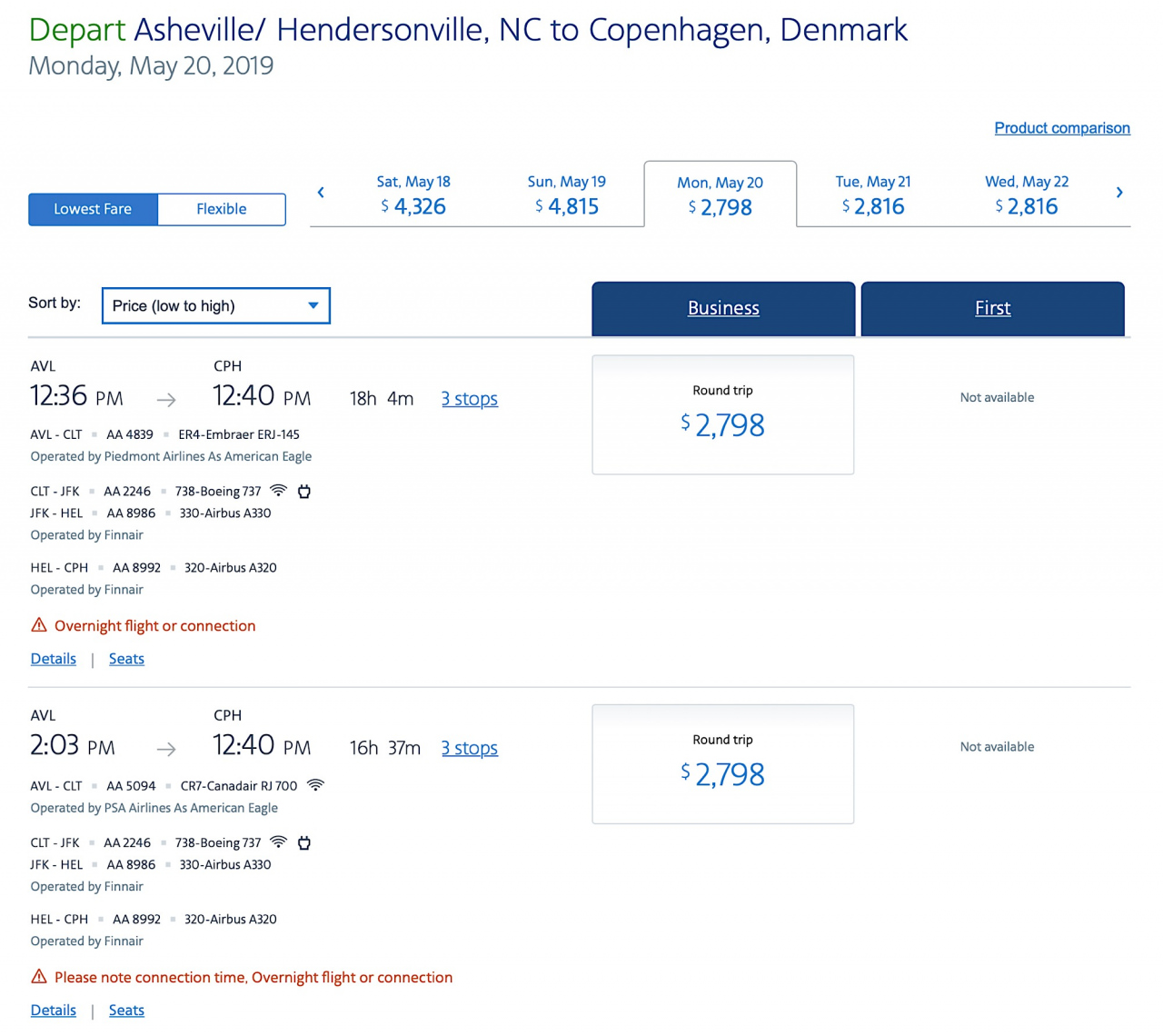 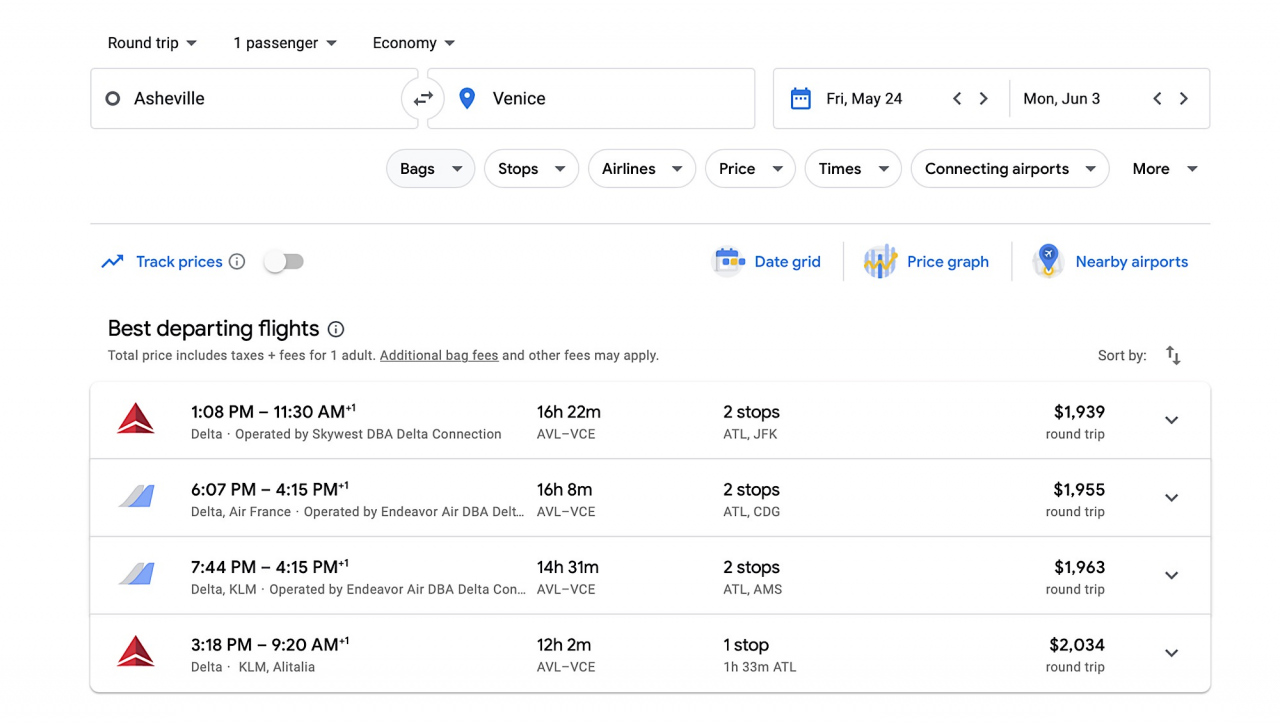 American Airlines’ search engine was invaluable in researching flights and alternative routes. Also invaluable was American’s hold feature, which allowed me to reserve a booking for 24 hours (or more depending on when I booked – until 11:59 pm the next day). I held and canceled at least five bookings, continuing to refine routes until I had just what I wanted.

What was it that I wanted? In addition to business class all the way, I also wanted comfortable departure times and short connections. I am not a fan of getting up at 4 in the morning to catch a flight or sitting for several hours, even if it is a lounge, waiting between flights. Also on my list: airports where the line for security and passport control wouldn’t deflate our spirit. That’s unavoidable in Venice. More than once, I felt my soul sink when I saw how many crestfallen souls were in front of me upon leaving Venice following a cruise.

Asheville is an easy departure airport, as there is rarely a long line queuing up for security, and Helsinki or Copenhagen, for entry into Europe, are a cinch.

By now, you may be nodding in agreement with me that travel can be exhausting. My goal was to make it less exhausting, and in fact, to make it part of the travel experience. Again, I am tall. If I weren’t, I could be reasonably happy in economy class. But for a few dollars less than $2,800 each, First and Business Class all the way, I was ready to pull the trigger.

Not So Fast, Pick The Proper Credit Card

I could have used any old credit card to book my flights. But even with this step, I needed to be strategic. Using one card over another could have consequences – or benefits. First, there were points to be earned by charging to the right card. In addition to earning more than 10,000 points on American, I could also earn points with my credit card company, and those points would prove to be valuable, as you will see in a moment. Second, credit cards typically offer some degree of travel protection, though it varies from company to company.

I purchased my flights on my Chase Sapphire Reserve card, which awards three points for each dollar spent on travel purchases. The $5,596 for two tickets would yield more than 17,000 points, which when used through Chase’s Ultimate Rewards portal are worth more than $200. 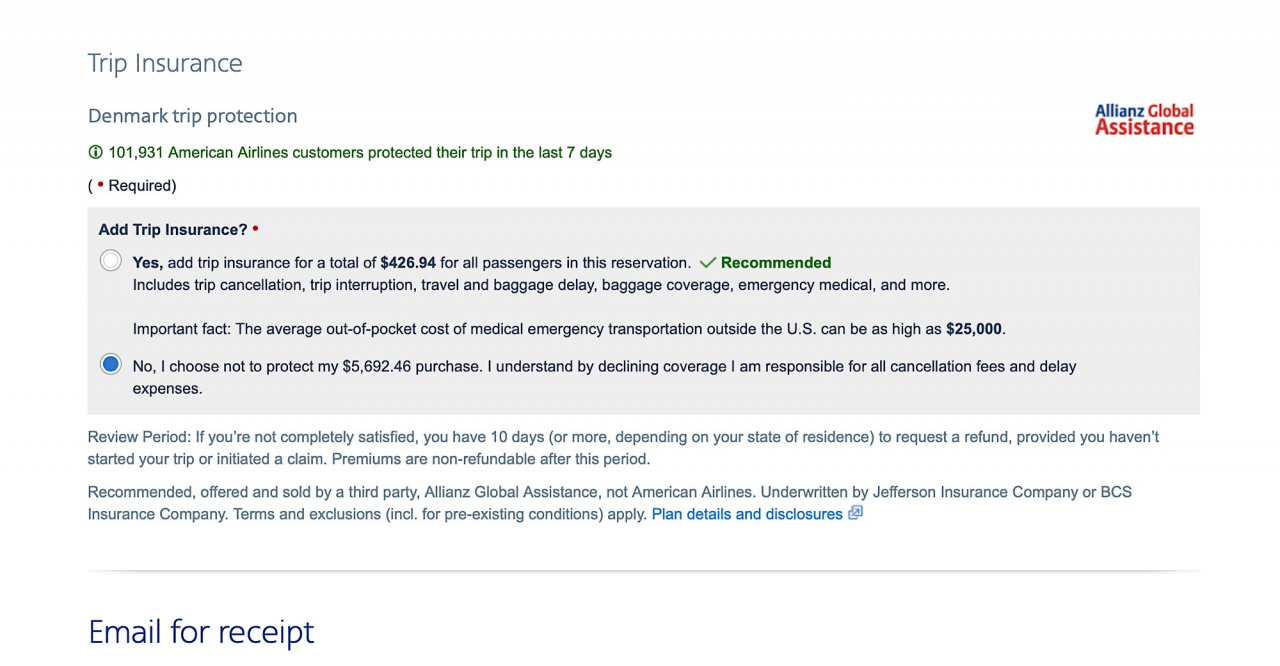 I said no to American’s insurance

What about travel protection? After all, this is a sizable investment. American Airlines wanted $427 for travel insurance. I said no, because Chase Sapphire Reserve’s travel protection benefits are sufficient. Among a whole list of benefits, a few stick out. 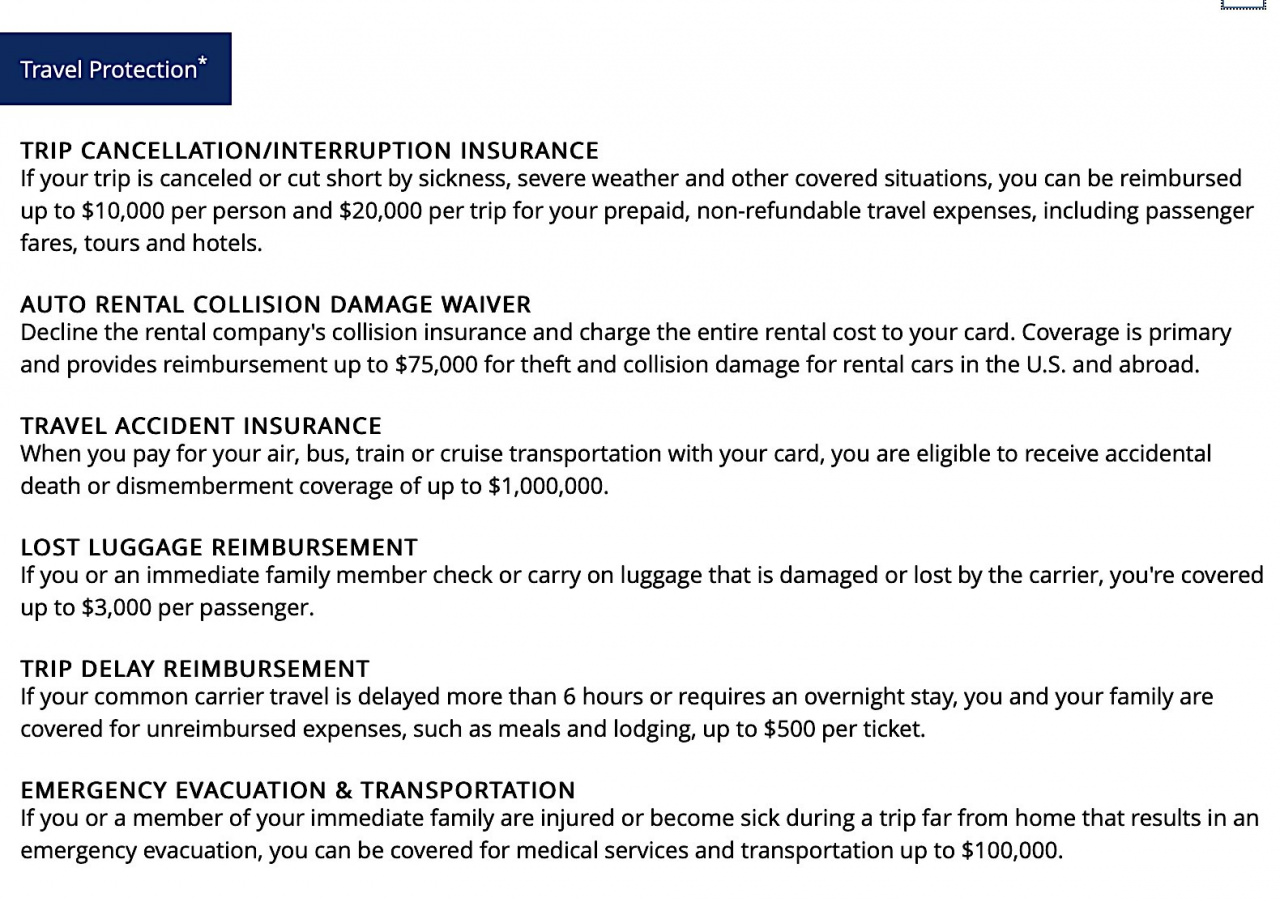 I’ve heard from several readers that Chase reimbursed them for cancellations and interruptions when cruise lines would not. I’m not an expert in insurance, so follow my lead at your discretion.

The Final Piece Of The Puzzle

I still had one piece of the puzzle to fit: travel between Copenhagen and Venice. 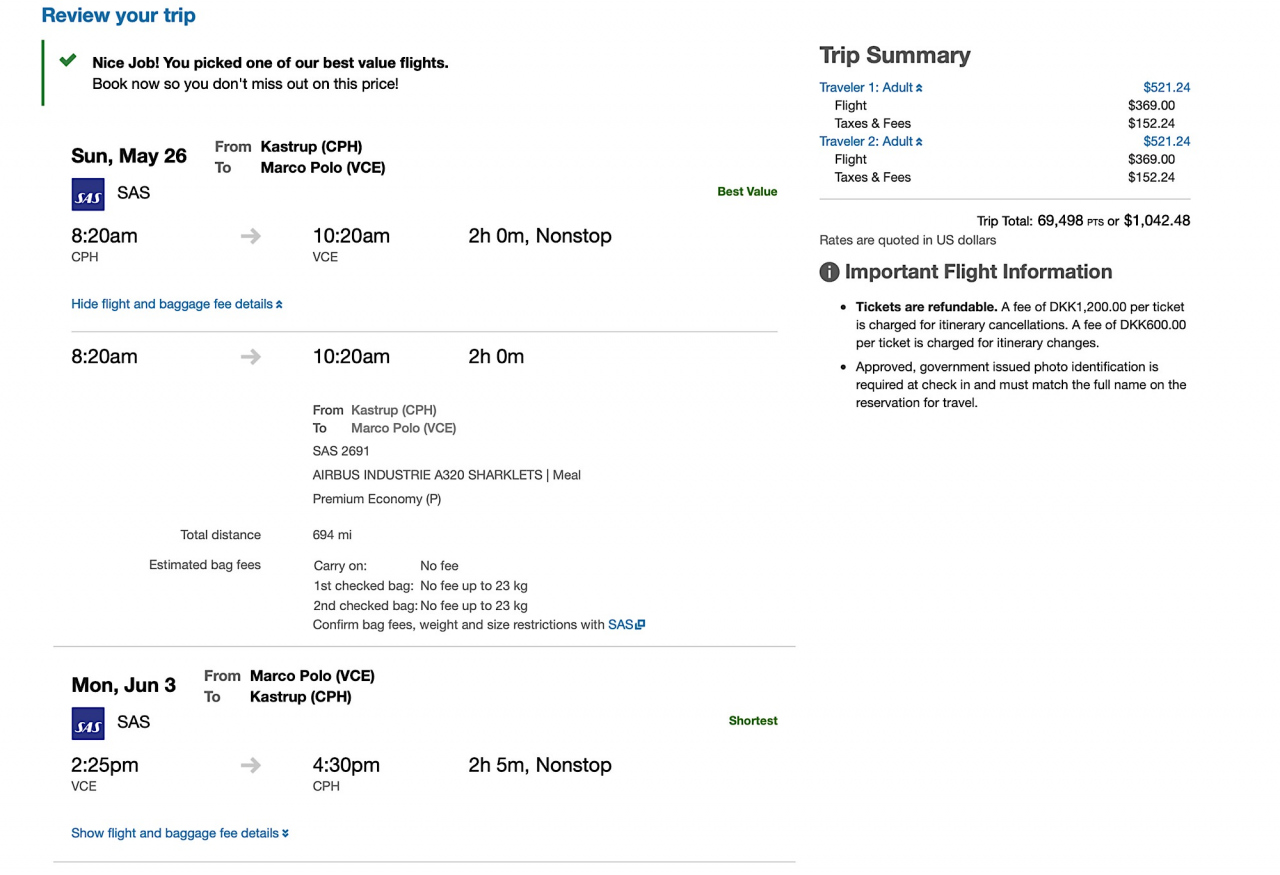 I booked our flights between Copenhagen and Venice on SAS through Chase Travel’s Ultimate Rewards booking portal. Those flights were essentially free. Why free? I’d applied for my Chase Sapphire Reserve during a promotion that awarded 100,000 points for charging $3,000 to the card within three months of receiving my card. Booking the SAS flights required 69,498 points, which, as noted, were essentially free seeing that I received the 100,000 point bonus. Had I paid for the flights, the cost would have been more than $1,000.

I  want to note here that SAS does not offer business class between Copenhagen and Venice. I chose premium economy for a few reasons: 1) at Copenhagen Airport, SAS Fast Track through security is only for those flying SAS in Economy Plus and above or for Eurobonus Gold and Diamond members; 2) lounge access in Copenhagen would cover breakfast for us; 3); no fees for our luggage; 4) meal onboard; 5) priority boarding; and 6) preferred seating.

One other note, of the 100,000 bonus points I received through Chase, I was able to book a few hotel nights in Scandinavia. My entire stay in Denmark and Sweden was more than covered by the savings on business class air and points I had accumulated through Chase’s credit card offer.

My initial search for cheap business class tickets to Europe returned fares in excess of $10,000 for two people. By getting creative I saved more than $4,000, and added a week in Copenhagen and the surrounding area. By stopping in Copenhagen, we’d have time to shake the jet lag and visit another fascinating region of Europe before heading off to Venice for a week of cruising on Ponant and bicycling with Backroads. Plus, our luggage, if it were delayed, would have time to catch up with us, unlike flying in the night before the cruise when luggage has virtually no chance of catching up.

I’m sure clever readers (and we have quite a few on our sites) will tell me other ways to find cheap business class tickets to Europe. And I welcome their comments. We’re all learning here. But I’m pretty happy with how it all worked out, even if it took a lot of work and time at the computer. Are you one of those clever readers? What did I do right and what did I do wrong? And how would you have met the challenge if you were the one looking to get to Europe in comfort?