You are here: Home / Cruise Companies / AmaWaterways / Water Levels: Making The Best Of A Bad Situation

During the past few weeks, I have been interviewing some major players in the river cruise industry for my podcast, Avid Travel With Britton Frost. So far, my podcast features interviews with Devin Quinn from CroisiEurope, Kristin Karst from AmaWaterways, and Pam Hoffee from Avalon Waterways. The podcast will also feature an interview with Walter Littlejohn from Crystal River Cruises next week. 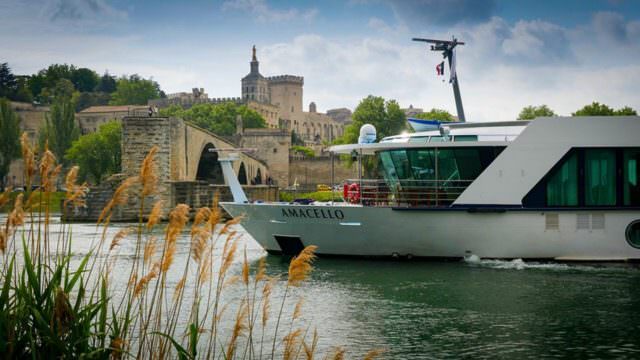 In every episode of the podcast, I make sure to ask at some point how each river cruise company has dealt with the issue of water levels.

In my recent interview with Avalon’s Pam Hoffee, I compared water levels to a garden. While it seems like a bit of an odd comparison, both things have to do with rain. While your garden may not have thousands of dollars invested into it like a cruise may, we can still use this example to understand what cruise companies are doing to try to make our travels easier when the water levels are low.

If we have a garden, we water it, we buy soil. While we may do as much as we can to maintain the garden, in the end, if there is not enough rain, your flowers may die. You wouldn’t blame anyone for that situation, you would just be disappointed. But ultimately, you would know that you did everything in your power to try to assist the process.

That is what river cruise companies tell us they are doing. They are not trying to control results, but simply be prepared for what may happen. It doesn’t matter what other precautionary measures are taken at that point, sometimes these ships simply can’t sail.

The thing that is so tricky about water levels, though, is that they can vary from day to day. In my interview with Kristin Karst, she mentioned that some days it would rain and make certain sections of the river passable when they weren’t the previous day.

When I asked Walter Littlejohn about how Crystal River Cruises handled the situation, his answer was simple: “For us, it first starts off with managing the expectations, and making sure that guests are always aware that this is always a possibility.”

So, opposed to cancellations, Crystal was able to navigate other parts of the river that gave their guests river cruise experiences, just, at times, not the one they had originally booked. Littlejohn didn’t get into how Crystal was able to manage to change itineraries in such a short period of time; he just stated that it was able to be done.

When asked about how AmaWaterways was handling the low water levels in Europe, Karst said: “We decided not to cancel because most of our clients prepare for their trips about a year in advance, sometimes even more than a year in advance. They look forward to this trip. So we decided that we can not include a couple of stops, but then we can include different stops on the Danube where we have never been before.”

She told an anecdote from a trip that she had just gotten back from on the Danube. An alternate stop in Grein turned out to be a highlight of the cruise, thanks to a castle tour.

“The count and his mom guided us through his castle,” Karst said. “In the evening, he came on board, together with his winemaker, and he created a wine paired dinner for our guests.”

River cruise companies had to think on their feet, because they, like passengers, were concerned about how to handle the current situation, as there were always so many variables.

Travelers eventually got news of the low waters in Europe and often considered canceling trips altogether. “The number one question that I am getting is, ‘Is this going to be a pattern?'” Pam Hoffee told us. She went on to say that there is no real way to predict the pattern, but added that we don’t often see this trend year after year. As of now, water levels are pretty much back to normal.

When I asked Hoffee the same question as the previous two interviewees, she responded by saying: “I do feel very positive and confident that we did everything we could in this last year. There are a couple of ways that Avalon was able to handle the low water situation. … Quite often we had another ship on the side of the river that was impassable. So we could have guests go from one side of the river to the other … Certainly, there were times that we couldn’t make that happen, and we had to have guests go to a hotel.”

I remember going on a Danube cruise as a teenager, and the river froze. I was traveling with AmaWaterways, and we ended up having to take a bus to another ship that Ama was able to use to allow us to continue our cruise. When talking with Kristin Karst I recounted this incident, which to be honest I had completely forgotten about, and tried to place myself in the shoes of the travelers who have had vacations canceled.

I did not even remember having to take a bus ride until we started talking about certain guests having to take buses to other ships in the fleet. When I did remember, all I thought about was how insignificant that part of the trip was, as you can probably gather based on the fact that I said I didn’t remember it.

I do acknowledge, however, that I was not paying for this trip out of my own pocket. It was not my first river cruise, or my last, and it wasn’t something that I had booked a year or so in advance. That’s the other tricky thing about this situation. Different people are going to respond in different ways. Just as we can not predict what is going to happen with the weather next August, we can’t predict who is going to be upset about having to ride on a bus for six hours.

Devin Quinn had a similar response to Hoffee, “There are some things that are just out of our control.” But Quinn also points out that CroisiEurope has some advantages in low water. “We were one of the last [companies] on the Rhine river, because we have a higher lift out of the water,” she said. CroisiEurope also has paddlewheelers in its fleet, which are able to navigate more shallow waters than traditional river ships.

Through interviewing all of these different execs from the cruise lines for my podcast, one thing became clear to me: They are all trying hard to keep their guests satisfied. No company wants to cancel trips or put people in hotels. Everyone who I interviewed seemed to sympathize with guests, and understand their frustrations and concerns.

While different cruise companies may have handled the low water levels differently, all of these river cruise companies have one thing in common. They are trying to make the best of a bad situation. And they all hope that this coming season the rivers will run full and ever so gently downstream.