Locks are definitely something you will experience on the rivers of Europe. You’ve probably heard of locks, but may be wondering, “What exactly is a lock?” Much like the Panama Canal – perhaps the world’s most famous example – locks are an engineering solution to allow vessels to navigate areas that might not be passable otherwise. 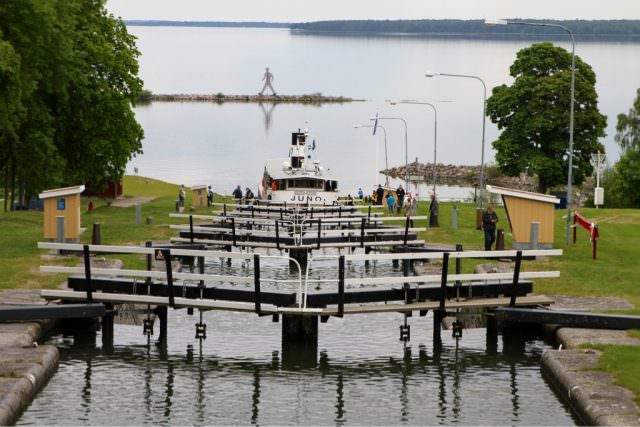 Early canoe-bound explorers would simply pick up their canoes in order to bypass treacherous waterways; an act known as a portage. Of course, large river cruise ships and other vessels can’t simply be plucked from the water and carried overland. To mitigate this disparity on rivers, dams and a series of chambers, or “locks,” were built. Ships sail into the lock, essentially an enclosed bathtub, move into position and idle their engines.

The doors to the lock are shut electronically, and for a period of time, it seems as if nothing will happen. Slowly, the turbulence increases as water is either admitted into or pumped out of the lock chamber so it can be level with the higher or lower waters ahead.

Floating guides on tracks run within the concrete walls of the lock, guiding the ship up and down, which usually squeals in protest as the volume of water in the lock changes. Depending on the height and volume of water, ships can spend as much as half an hour in-transit within a lock.

On some itineraries (particularly those traveling the Main-Danube Canal, with its 16 locks), lock-lovers will be in heaven with a full day’s worth of transiting these unique, remotely operated structures. Some locks can hold two or more ships at a time, while others are so narrow that simply admitting one ship is a challenge, requiring great skill on the part of the ship’s navigation team to enter them safely.

River cruise ships can transit the locks on their own or as part of a larger group of ships, depending on the season and the size of the lock. When water enters the lock, it does so in starts and stops that can result in your ship rising quickly in one motion, then slowly in the second. It was this “elevator movement” that can potentially make one feel “seasick,” since the lock walls are literally inches away from the ship.

Most passengers are unaffected, but should you find yourself feeling a little woozy, try sitting in the main lounge, which often has 180-degree wrap-around windows and a better overview of the lock itself. I’ve also heard that you can quit drinking water for the duration of the transit, switching instead to heavier drinks like coffee and soda. I’m not sure if that remedy “holds any water” from a health standpoint, but some travelers swear by it.

If you are river cruising in Europe often, you will most likely encounter locks at one point or another. The best advice I can give? Head up to the top deck and enjoy the transit.