Viking announced it has extended its partnership with Highclere Castle, the country seat of the Earl and Countess of Carnarvon that served as the setting for Downton Abbey. As part of the relationship, Viking has signed on as headline sponsor of “Heroes at Highclere,” a weekend to raise money for those who serve and those who save, taking place at the Castle on September 8-9, 2018.

Representatives from more than 20 countries will gather on the lawns for the event, which will honor the centennial anniversary of the end of World War I and will highlight the history of flight, as well as the creation of the Royal Air Force, culminating in a memorial service on Sunday.

Viking has also launched a series of online videos to complement the first-ever coffee table book about Highclere, At Home at Highclere, written by the Countess of Carnarvon. 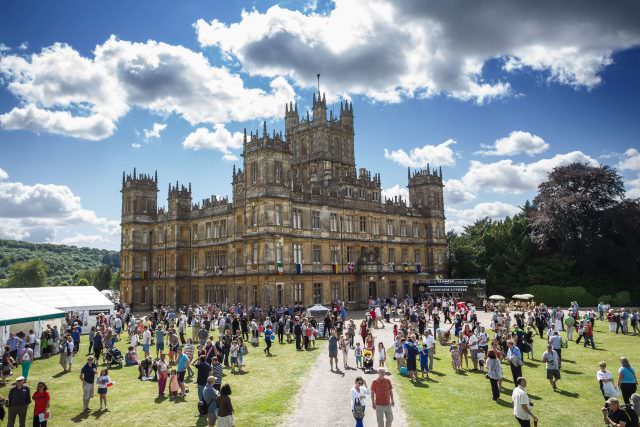 “Many of our guests were introduced to both Viking and Highclere Castle while watching Downton Abbey, so we are inextricably linked in a lot of minds,” said Karine Hagen, senior vice president of Viking. “But first and foremost, the relationship between Viking and Highclere is one of friendship and family. In our professional worlds, both Lady Carnarvon and I are much aligned in our determination to deliver enriching and meaningful experiences to our guests. Our respective platforms, Highclere Castle and Viking, allow us to connect different cultures in ways that can ultimately help make the world a more understanding place. Heroes at Highclere, which Viking is proud to sponsor, is one such example – and just one of the many of the worthwhile causes the Earl and Countess of Carnarvon organize and to which they lend their names.”

In addition to marking the Royal Air Force and World War I centennial, Heroes at Highclere will welcome several thousand visitors for a fundraising weekend for all involved in wars past and those continuing to serve today.

Funds raised during the weekend will go support veterans’ charities including Combat Stress, Doctors Without Borders, The Royal British Legion, The UK Sepsis Trust and RAF100 Appeal, as well as one in the USA. Throughout the weekend, guests will be entertained with displays in the sky and on the ground to commemorate heroes. The Red Arrows Display Team, P51 Mustang, a Typhoon Display, the Spitfire, the Tiger 9 Formation Team and the Great War Display Team will take part in the event – and Europe’s only airworthy B17 will fly over the Castle on both days.

The Earl and Countess of Carnarvon will also dedicate a new memorial of an airman, carved from a 200-year-old cedar felled on the Highclere Estate. The event will also feature commemorative soccer games inspired by the only moment of peace during World War I, when armies from both sides famously played soccer on Christmas Day 1914. Musical entertainment will feature the popular Military Wives Choir, a Scottish Pipe Band and the 1920s band The Gatsby Girls.

The Viking hospitality area is set on the lawns, where guests will enjoy a tea tent, a dance tent, and a speakers’ tent with well-known literary names, including Robert Harris and former war correspondent Kate Adie, among others.

“We are delighted to continue our partnership with Viking for Heroes at Highclere. This weekend is to raise money for those who serve and those who save, and we hope it will be a fascinating and meaningful event for all who attend,” said Lady Carnarvon. “This is also a particularly exciting time for us, as we prepare to welcome the cast and crew of Downton Abbey back to Highclere Castle for the filming of the highly anticipated movie, and I am delighted that Julian Fellowes who created and wrote Downton Abbey is joining us on Sunday as one of our speakers.”

Known to global audiences as the setting of Downton Abbey, Highclere Castle is a country house in the Jacobethan style by the architect Charles Barry, with a park designed by Capability Brown. The 5,000-acre estate is in Hampshire, England, about 5 miles south of Newbury, Berkshire. Long the Carnarvon family’s ancestral country seat, Highclere has welcomed royalty, statesmen, and notables from the worlds of business, academia, and the arts. Lady Carnarvon is the author of multiple bestselling books, including At Home at Highclere, Lady Almina, and Lady Catherine and the Real Downton Abbey.

In addition to the Heroes at Highclere sponsorship and new videos, Viking offers a variety of ways for guests to experience life at “The Real Downton Abbey” in person and at home. Viking’s Oxford & Highclere Castle pre- or post-trip extension is available for guests on select river and ocean cruise itineraries. The Privileged Access extension was co-created by Karine Hagen, with the Carnarvon family. The extension provides guests with an exclusive three-day experience in the rolling hills of England’s countryside with a champagne welcome and tours of the estate.