Uniworld has 11 different itineraries that feature cruises on the Rhine River. Packages vary in length from 8 days to 25 days. The 8-day itinerary is for travel on the Rhine River only, and the 10-day plus cruises may also include travel on the Moselle, Main or Danube in addition to the Rhine. You’ll see itineraries between Basel and Cologne, Amsterdam and Bucharest and Amsterdam and Vienna. 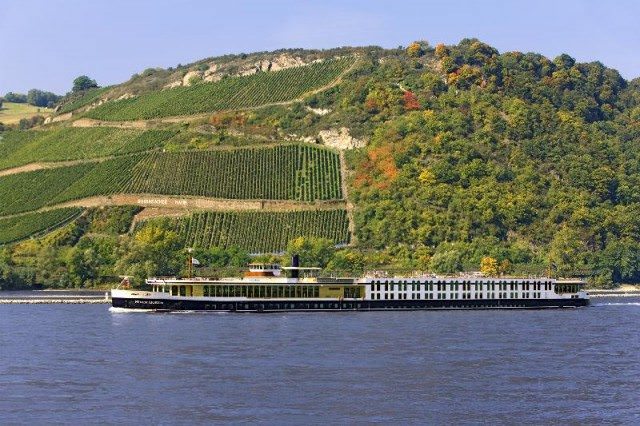 Castles Along the Rhine

This is an 8-day cruise between Amsterdam and Basel. We’re going to look at the itinerary that departs from Amsterdam.

Your trip will begin in Amsterdam where you’ll board your ship. However, your ship will depart for Cologne in the afternoon; so there are no excursions in Amsterdam.

On day two, you’ll take a guided tour of Cologne’s Old Town, including a visit to the Cologne Cathedral, a UNESCO World Heritage Site. The Captain’s Welcome Reception is scheduled in the evening.

Castles Along the Rhine Itinerary. Image courtesy of Uniworld.

On the third day of your cruise, you’ll travel to Koblenz, which is situated at the confluence of the Rhine and Moselle rivers. The morning hours will be spent cruising along the Rhine. Koblenz is about 73 miles southeast of Cologne.

While you’re in Koblenz, you’ll be able to take a walking tour of the city; or you can choose instead to visit Marksburg Castle. Another option is to take a bicycle excursion to Boppard, which is about 18 miles south of Koblenz.

Day four will begin with a cruise through the Rhine Gorge on your way to Rüdesheim. This German city is about 28 miles southeast of Boppard. You can choose to visit Castle Vollrads for a tour and wine tasting, or you can choose to hike about 3.5 miles from Rüdesheim to the small village of Assmanhausen.

On day five, your ship will dock in Germersheim, Germany. It’s located about 12 miles southwest of Speyer. There are two excursions offered. You can take a walking tour of Speyer, or you may decide to visit the Doktorenhof Vinegar Estate for a tour and opportunity to sample some of the foods and beverages made from its vinegar like vinegar coffee or vinegar chocolates.

You’ll travel to Strasbourg on day six. There are two excursions offered, or you can explore the city and its surrounding areas independently using one of the bikes provided by Uniworld. The two available tours include a visit to Strasbourg’s Old Town; and the other is the “Do as the Locals Do” walking tour.

Day seven will be the final full day of your trip. Your ship will dock in Breisach, Germany near the Black Forest. You can choose to say in Breisach and explore the city and its surrounding areas by foot or on a bicycle. Or you can choose to visit the French cities of Kayersberg and Riquewihr in the Alsace region of France. Another option is to take a guided city tour of Colmar.

In the evening on day seven, you’ll be treated to the Captain’s Farewell Reception and Dinner.

Your trip will end in Basel on day eight. After breakfast, you’ll disembark and transfer to the airport for your return flight home.

Cruises are available from March through November.

This is a 10-day itinerary between Frankfurt and Cologne. We will be looking at the cruise that departs from Frankfurt.

There is one ship for the Magnificent Moselle & Rhine cruise. The River Queen carries up to 128 guests and has staterooms that are between 151 square feet and 215 square feet.

Your trip will begin in Frankfurt on day one. You’ll receive a Welcome Reception followed by dinner served on board.

You’ll spend day two in Frankfurt where you can take a walking tour or tour the city by bike.

On day three, you’ll begin the day with a visit to the city of Mainz, which sits at the confluence of the Rhine and Main rivers. You’ll take a walking tour of the city’s Old town and visit Wiesbaden’s hot springs, which is known for its sparkling mineral water.

In the afternoon on day three, you’ll travel to Rüdesheim. After arriving, you travel to Eberbach Abbey for a tour and wine tasting.

The fourth day features a visit to Boppard. You’ll be able to stroll through a wine village along the Rhine River, take a biking tour, or take a walking tour with a chairlift ride to the Rhine Bend and a hike through a vineyard.

Day five begins your travel on the Moselle River to the city of Cochem. There are two excursions available. You may choose to visit the small village of Ediger-Eller, which is located along the banks of the Moselle River. You’ll have the opportunity to sample local wines.

Or you can choose the Riesling Vineyard hike, which features one of the steepest vineyards in Europe.

On day six, you’ll visit Trier where you can choose to take a walking tour of the city, which is home to some UNESCO World Heritage Sites collectively known as the Roman Monuments, Cathedral of St Peter and Church of Our Lady in Trier. Other famous sites include Porta Nigra – a large stone Roman gate, Karl Marx’s house and the Imperial Baths.

The other featured excursion in a culinary tour through the local markets in Trier. You’ll be able to sample some Roman dishes from 1st century Apicius recipes.

Day seven begins in Remich where you’ll be able to visit the Roman Villa Borg, which is a reconstructed Roman settlement. Or you can visit the Saar Bow, which is a view overlooking the Saar River where the river actually forms a loop.

The other available option on day seven is a trip to Luxembourg City in Luxembourg.

On the eighth day of your trip, you’ll travel to Bernkastel. You can choose to take a bicycle tour, or you can enjoy a walk through the village and some vineyards. One of the notable sites is Graach Gate, which is a landmark and a musuem of local history.

You’ll depart the Moselle River on day nine and travel along the Rhine to Bonn, Germany where Ludwig van Beethoven was born. You’ll visit Old Town, including a visit the National Museum of Contemporary History. Or you can take a bike tour of Bonn instead.

In the afternoon, your ship will depart for Colgone. You can take guided tour of the city, which includes a visit to the Cologne Cathedral. Or you can choose to experience the city as a local and visit the Belgian Quarter, Kölsch beer halls or the Art Nouveau cafés.

Day 10 marks the end of your cruise. You’ll disembark in Cologne after breakfast and tranfer to the airport for your return flght home.

Cruises available from May through November.

Which itinerary is the best option? There isn’t a significant difference in terms of time. One is eight days, and the other is 10 days. So your decision will really be based more on the places you’d like to visit.

If you want to travel along only the Rhine River, the Castles Along the Rhine is probably the best choice. You’ll travel the full-length of the Rhine; whereas, on the Magnificent Moselle & Rhine, you’ll only travel a portion of it between Cologne and Frankfurt.