Tauck is a tour company that offers travel packages on both land and water. The company has 10 itineraries that include the Rhine River, one of which is for families with younger children.

Let’s take a look a two of the Rhine River cruise packages that Tauck offers. 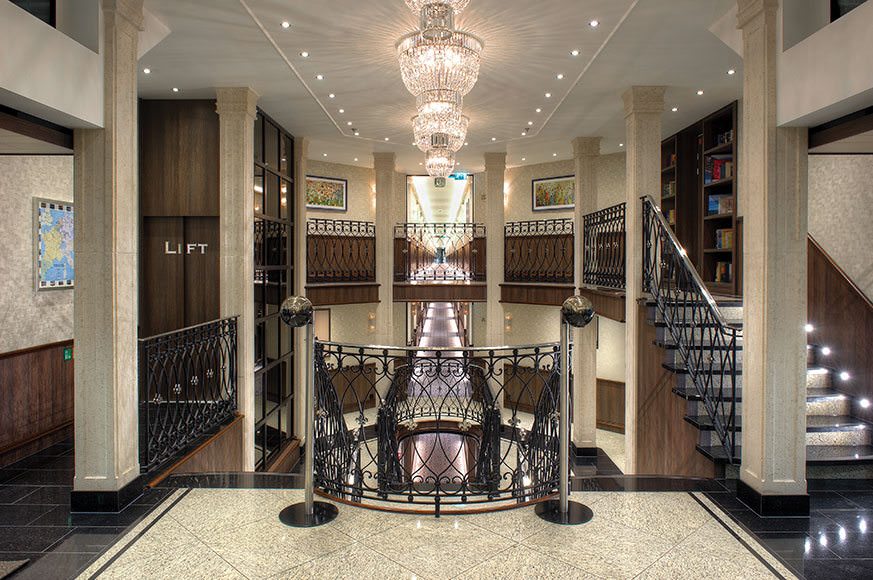 The Romantic Rhine: Amsterdam to Basel

This is an 8-day itinerary between Amsterdam and Basel. Travel is available in both directions and is referred to as northbound or southbound. We’re going to look at the southbound itinerary that begins in Amsterdam.

There are two ships available for The Romantic Rhine cruise. The ms Inspire and the ms Grace. Both ships are identical with regard to passenger capacity and stateroom sizes. These vessels are 443 feet long and carry up to 130 guests, which is a lower guest capacity than most ships that travel on the Rhine River. The staterooms are between 150 square feet and 300 square feet in size.

Your river cruise will begin in Amsterdam. After embarkation, you’ll receive a Welcome Reception followed by dinner on board the ship. 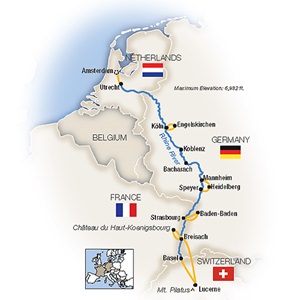 On day two, you’ll take a canal boat tour in Amsterdam and visit the Rijksmuseum, a museum that is dedicated to the arts and history in Amsterdam. After your tour, you’ll travel about 33 miles southeast to Utrecht to board your ship.

Day three of your trip will be spent in Cologne. You’ll take a guided tour of the city, including a visit to the Cologne Cathedral, a UNESCO World Heritage Site.

The fourth day combines a tour of Koblenz in the morning and scenic cruising through the Rhine Gorge in the afternoon. During your visit in Koblenz, you’ll be able to choose between a guided tour of the city or a bike tour along the Rheindradweg route.

Day five features a visit to Speyer or Heidelberg. You may decide to stay in Speyer and visit sites, such as the Technik Museum and the Speyer Cathedral, another UNESCO World Heritage Site in Germany. Or you might choose to travel about 20 miles northeast for a tour of Heidelberg.

On day six you’ll be able to choose between two destinations. One is in France, and the other is in Germany. You can travel to Strasbourg, France where you’ll have the opportunity to either explore the city independently or to take a guided bike tour of Strasbourg.

If you would rather visit Germany, you’ll spend the day in the spa town of Baden-Baden, located near the Black Forest. You can choose to take a guided walking tour of the city, or you might opt to visit the famous Caracalla Spa instead.

Day seven will be the last full day of your trip. There are two excursions available. If you choose to stay in Switzerland, you can travel to Lucerne where you’ll board a cogwheel train that will take you to Mt. Pilatus, which sits at an elevation of 7,000 feet. The other excursion features a trip along the Alsatian wine route in France. In the evening on the seventh day, you’ll take an orientation tour of Basel before returning your ship.

Your trip will conclude in Basel on day eight. After breakfast, you’ll disembark and be transferred to the airport for your return flight home.

This 13-day cruise is also between Amsterdam and Basel. We’re going to look at the southbound itinerary from Amsterdam.

You’ll embark on your ship in Amsterdam on day one. After the Welcome Reception, you’ll be served dinner on board. 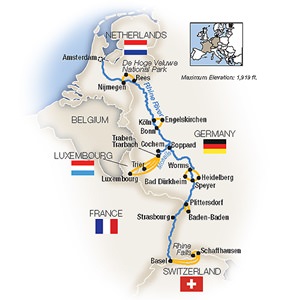 You’ll spend your second day in Amsterdam. The day begins with a canal cruise and a visit to the Rijksmuseum. In the afternoon, you’ll be able to explore Amsterdam independently; or you’ll have the option to visit the home of a local family if you would like to learn more about the city from people who actually live there.

Dinner will be served on board, and your ship will depart for Nijmegen.

On day three, you’ll travel about 15 miles north from Nijmegen to Arnhem for a visit to the 34-square mile De Hoge Velue National Park – a nature reserve that consists of sand dunes, forest and areas covered by shrubs. The excursion also features a visit to Kröller-Müller Museum, a national art museum and sculpture garden.

There is a bicycle excursion available at the De Hoge Velue National Park. If you would rather have a more active day, you can take a bicycle tour through the park instead. You’ll return to your ship for lunch, where you’ll be able to enjoy an afternoon and evening cruise along the Rhine River.

The fourth day will begin with a morning cruise to Cologne. After arriving in Cologne, you’ll take a guided tour of the city before returning to your ship for lunch. In the evening, you’ll travel to the medieval Satzvey Castle for dinner.

The fifth day will be spent in Cochem. You’ll take a guided tour of Cochem, which includes a visit to the Reichsburg Castle. You’ll then have some free time to explore the city on your own. Later in the day, you’ll visit the Schlagkamp Wine Museum for a tour and the opportunity to sample some local wine.

On day six, you’ll enjoy a walking tour of the Grand Duchy of Luxembourg. If you choose to continue your excursion, there is a bicycle tour available to guests after the walking tour.

Day seven begins with a guided tour of Trier. Your ship will be docked in Traben-Trarbach, which is about 37 miles northeast of Trier. You’ll return to the ship for lunch and will have the opportunity to visit the town of Traben-Trarbach before your ship departs later in the day.

Your river cruise will return to the Rhine on day eight. You’ll cruise through the scenic Upper Middle Rhine Valley, commonly referred to as the Rhine Gorge. Your ship will dock in Boppard for the evening.

The ninth day of your trip will be spent in Heidelberg or at the Karl Schaefer Winery.  The winery opened its doors in 1843. It’s located in the German spa town of Bad Dürkheim about 24 miles northwest of Speyer.

On day 10, you’ll visit Baden-Baden – a city known for its healing thermal waters and Roman Bath ruins. You’ll take a guided walking tour of Baden-Baden. In the afternoon, you’ll be able to explore the town independently. An optional visit to the Caracalla Spa is also offered.

Day 11 features a visit to Strasbourg, France. You’ll take a guided walking tour followed by time to enjoy the city on your own.

You’ll spend day 12 in Basel. Your day will begin with a sightseeing tour of Basel followed by a walking tour of the city’s Old Town. There is another tour option available. If you would rather see the Rhine Falls, you can choose to take the excursion to Schaffhausen, which is located about 85 miles northeast of Basel.

Your river cruise will end in Basel on day 13. After breakfast, you’ll disembark and transfer to the airport for your return flight home.

This itinerary is available from April through September.

So which itinerary is best for you? It depends on how much time you have to travel and whether or not you want to travel on both the Rhine and Moselle rivers.

The Romantic Rhine package is 8 days long as opposed to the 13-day Rhine & Moselle itinerary. If you’re more limited with time, the first one is a great option. And if you have some extra time to travel, then the second one will allow you to travel on two rivers rather than just one.

There are some slight differences between the two itineraries for the Rhine River cruise with regard to destinations and excursions. For example, you’ll spend an additional day in the Netherlands on the Rhine & Moselle cruise, you’ll have dinner at the medieval Satzvey Castle, and you’ll have the opportunity to visit to the Rhine Falls in Switzerland.

For The Romantic Rhine itinerary, you’ll have the option to travel to Mt. Pilatus from Lucerne; and you’ll visit Koblenz.

The best choice between the two will likely depend on the amount of time you have to spend traveling and whether or not you want to travel on both the Rhine and Moselle rivers.