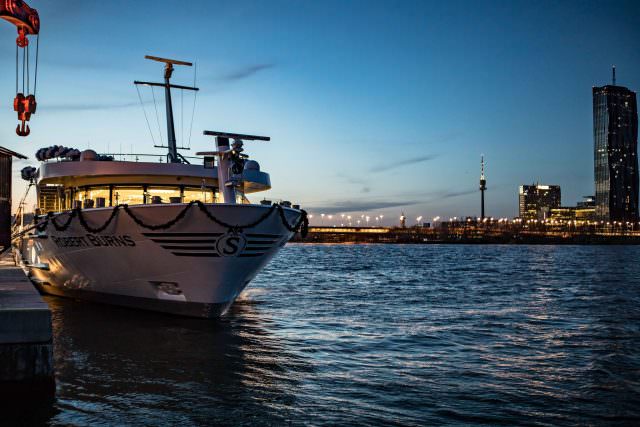 After the April 3 ceremony, Bohan and travel agents from across the continent joined Riviera River Cruises officials on an inaugural cruise down the Danube River to Budapest, Hungary.

“We’re proud to have Gloria as godmother of the MS Robert Burns – and as Riviera River Cruises’ first American godmother,” said Jana Tvedt, Riviera River Cruises’ U.S. Vice President. “We’re also proud to announce that we’ll be launching three more ships in 2018 and 2019, including another ship on the Douro River and two ships for the Rhine, Main and Danube itineraries.”

The all-suite MS Robert Burns will spend its first year on the Rhine, Main, and Danube rivers, including on several of Riviera River Cruises’ newest itineraries such as Budapest to the Black Sea and a special Cruise the Heart of Europe departure that is part of Riviera’s Masters of Wine series with BBC wine experts Susie Barrie and Peter Richards. It will end the year on the Enchanting Rhine & Yuletide Markets itinerary.

Launching in August 2018 is the MS Douro Splendour, Riviera River Cruises’ second ship on the Douro River. The 262.5-foot Douro Splendour is constructed with the latest technology and a strong environmental ethic in mind, purpose-built to fit the size limitations of the Douro’s locks. Amenities include a lounge and bar, restaurant, fitness room, spa, and sun deck with pool.

The Douro Splendour’s 63 cabins and suites are a minimum of 151 square feet. The ship can accommodate 121 guests and 36 crew. Upper and Middle Deck cabins and suites feature floor-to-ceiling windows that slide down halfway; Deluxe and Superior Balcony Suites feature floor-to-ceiling windows plus sliding doors that open onto a small private balcony.

The 443-foot William Wordsworth is an all-suite ship, while the 361-foot George Eliot is a new, smaller class with cabins and suites. Amenities include a panoramic observation lounge, main restaurant, wellness area, boutique, and sun deck. A second, smaller restaurant on both, The Bistro, offers a more casual lunch and dinner experience with an open kitchen and panorama windows that can allow for al fresco dining. The William Wordsworth also has a fitness center and spa.