Riviera River Cruises has four different itineraries that feature the Rhine River. Two of the packages combine a Rhine River cruise with other waterways, including the Moselle, Main and Danube rivers. Cruises are between 8 days and 15 days long.

Interestingly, none of the itineraries travel west of Cologne, Germany, which means Amsterdam is not visited. All cruises either begin or end in Cologne, and two are round-trip with the cruise beginning in Cologne.

This 8-day itinerary is round trip from Cologne. It does not feature visits to destinations south of Strasbourg or Colmar, France, which means you won’t travel to Basel or the Black Forest region of Germany. However, there are several other cities you’ll visit on Riviera’s Rhine River cruise.

There are six different ships available for this itinerary. They include the MS Oscar Wilde, MS William Shakespeare, MS Charles Dickens, MS Jane Austen, MS George Eliot (will debut in 2019), and the MS Emily Brontë.

The two largest ships in terms of passenger capacity and stateroom sizes are the MS Oscar Wilde and the MS Emily Brontë. Both of these vessels carry up to 169 passengers and have staterooms that range in size from 183 square feet to 274 square feet.

The smallest ship in terms of passenger capacity will be the MS George Eliot, when it debuts next year. It will carry up to 132 passengers. Stateroom size will range from 161 square feet to 253 square feet.

And the remaining four vessels carry up to 140 passengers and have staterooms measuring between 199 square feet and 242 square feet.

As noted, your cruise will begin in Cologne. There are no excursions planned in Cologne on day one of your river cruise. There will be a welcome party followed by dinner on board.

On day two, you’ll travel to Koblenz. You’ll take a guided tour through Old Koblenz, and then you’ll have some time to explore the city on your own before returning to the ship. Your ship will depart for Boppard, where you’ll be docked for the night. Dinner is served on board. You can remain on the ship, or you might choose to spend some time exploring the city. 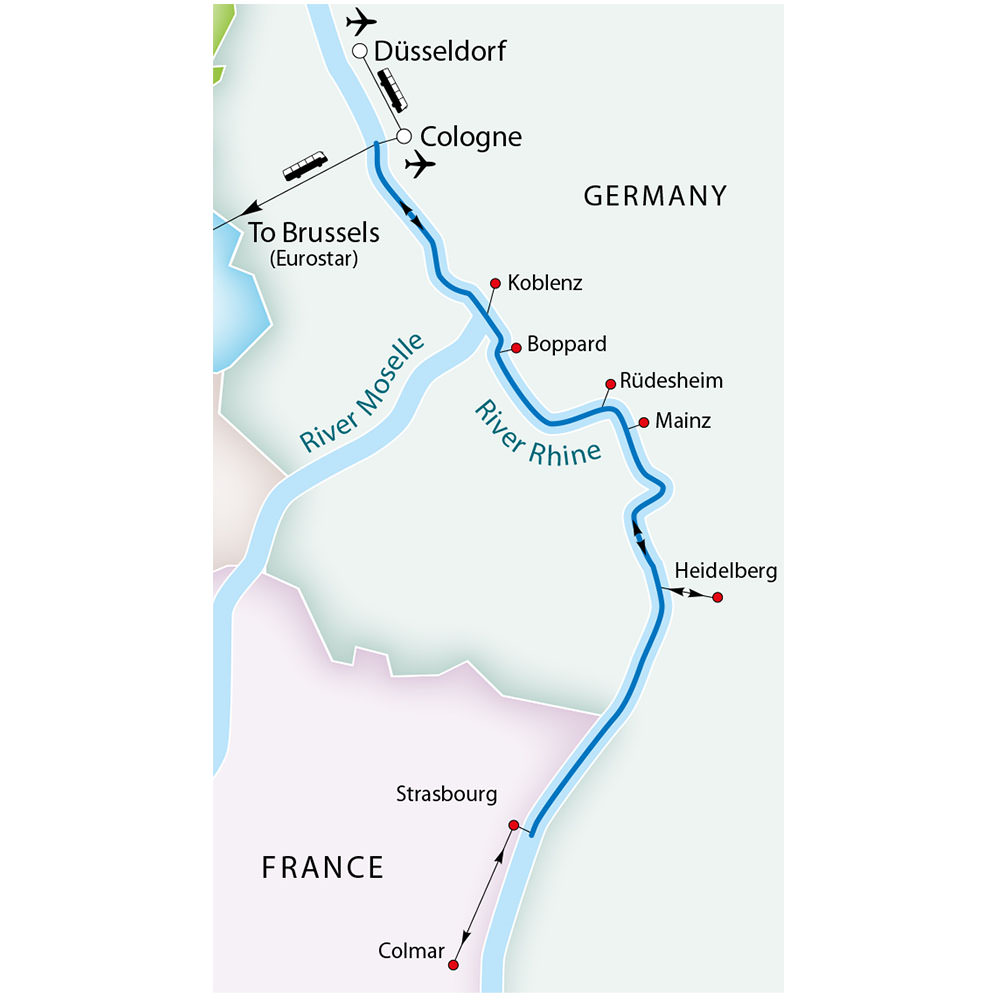 Your ship will depart Boppard in the morning and head toward Mainz on day three. You’ll travel through the Upper Middle Rhine Valley, also known as the Rhine Gorge, which is the 65-mile stretch of the Rhine between Koblenz and Bingen.

Mainz is about 53 miles southeast of Boppard. It is famous for its wine and for being Germany’s wine capital. It is also home to Johannes Gutenberg, the famous inventor of the moveable printing press. While there are no scheduled excursions, you’ll be free to the visit the Gutenberg Museum in Mainz’s Old Town.

On day four, you’ll take a guided walking tour of Heidelberg. You’ll have some time to explore the city independently before returning to the ship for dinner.

Day five features a visit to the French cities of Strasbourg and Colmar. Your morning will begin with a guided walking tour of Strasbourg followed by a scenic drive to Colmar. This picturesque region is known as the wine route. It features rolling hills and medieval villages lined with cobbled streets.

Your day begins with scenic cruising as your ship departs from Strasbourg. You’ll reach Rüdesheim late afternoon on day six. And you’ll take a walking tour through the city.

On day seven, you’ll return to Cologne. The morning features a scenic cruise from Rüdesheim. After arriving in Cologne in the afternoon, you’ll take a guided city tour.

Your trip will conclude in Cologne on day eight. After breakfast, you’ll disembark and transfer to the airport for your return flight home.

This 8-day itinerary is between Basel and Cologne. For cruises that begin in Cologne, the trip will end in Lucerne rather than Basel. We will look at the itinerary from Cologne to Lucerne.

Thera are seven ships available for this cruise. They are the same ships as those listed for the itinerary above. The MS Robert Burns is the other ship that is available. It carries up to 169 passengers and has staterooms that range in size from 183 square feet to 274 square feet.

Your trip will begin in Cologne on day one. You’ll receive a welcome reception and have dinner on board. There are no excursions planned for the first day. 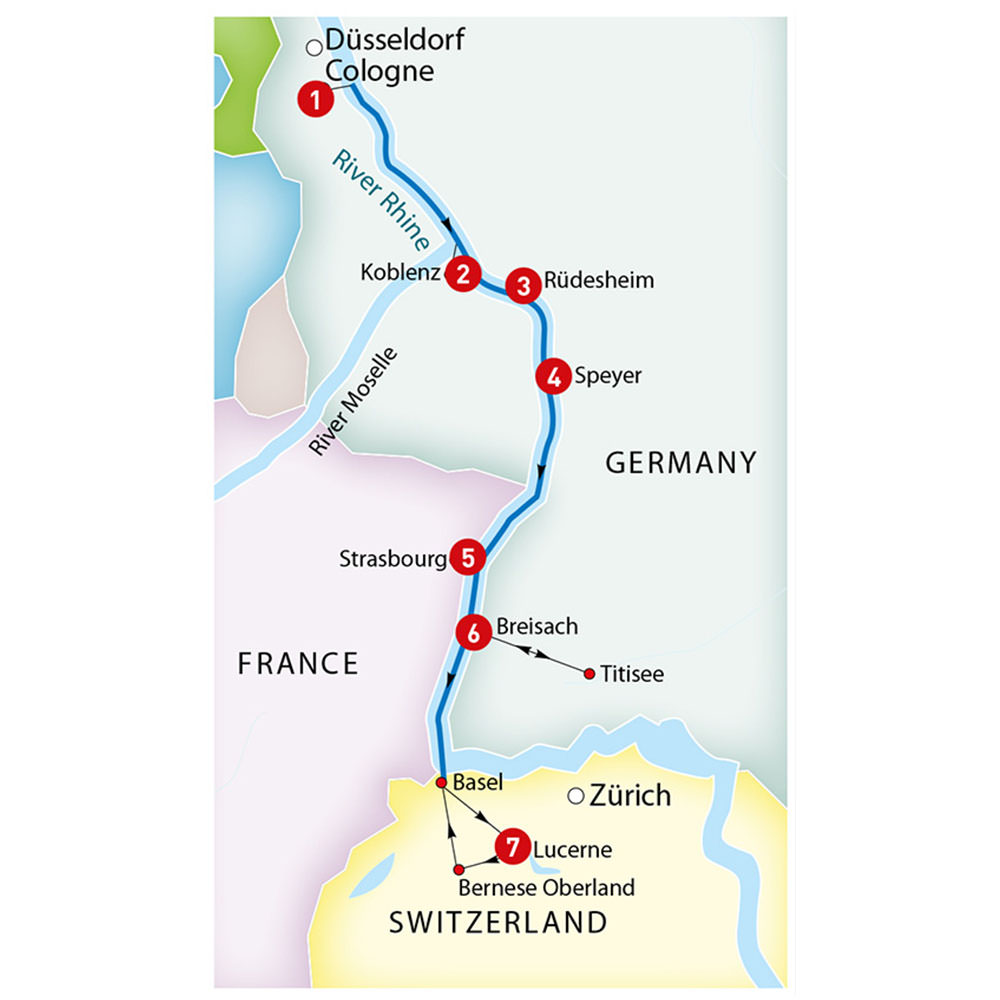 You’ll cruise to Koblenz on day two where you’ll have free time to explore the city independently. Koblenz is located at the confluence of the Rhine and Moselle rivers.

On day three you’ll take a scenic cruise through the western portion of the Rhine Gorge on your way to Rüdesheim. In the afternoon, you’ll be able to tour the city on your own since there are no excursions planned.

Day four will be spent in Speyer, Germany. You can choose to explore Speyer, or you might choose to travel about 19 miles northeast to the city of Heidelberg.

You’ll enjoy a scenic cruise to Strasbourg on day five. After arriving in Strasbourg, you’ll take a guided walking tour of the city where you’ll observe famous sites, such as the Notre Dame Cathedral, Ponts Couverts, and the historic La Petite France.

On day six of your cruise, you’ll travel to Breisach where there is an excursion to the Black Forest. You’ll drive through the Black Forest to the village of Titisee, which is located on Lake Seestrasse at an elevation of about 2,785 feet. After returning to your ship, you’ll depart for Switzerland.

You’ll drive to the Switzerland’s Alpine region of Bernese Overland in the morning on day seven. The famous peaks of Eiger, Mönch and Jungfrau should be visible. After a visit, you’ll descend from the mountains by rail. The rest of your day will be spend in Lucerne.

On day eight, your trip will conclude in Lucerne.

So which itinerary is the best choice for you? If you are not interested in visiting the Black Forest or destinations in Switzerland, then the Rhine, Strasbourg & Heidelberg River Cruise might be a good option.

There also seems to be more availability with this itinerary than there is with the second one.

Also see Seven Ways That Riviera Seeks To Stand Out