Let’s take a look at two of Emerald Waterways’ Rhine River cruises – the Jewels of the Rhine and the Majestic Rhine. 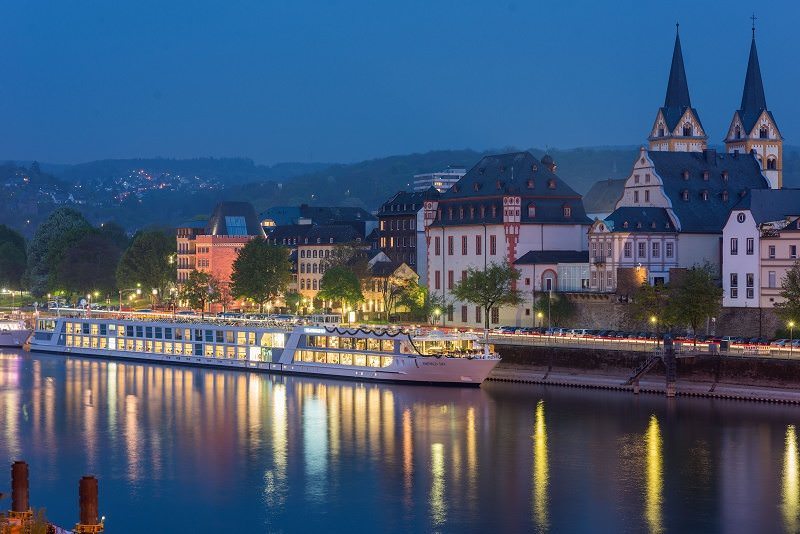 Jewels of the Rhine

The Jewels of the Rhine is an 8-day river cruise between Amsterdam and Basel. The itinerary features travel to destinations that are commonly found on Rhine River cruises, such as Breisach, Strasbourg, Heidelberg, Koblenz and Cologne. However, it does not include a visit to Rüdesheim.

There are five ships for this itinerary – Emerald Dawn, Emerald Destiny, Emerald Sky, Emerald Star and Emerald Sun. All of the vessels carry up to 182 passengers and have staterooms that range in size from 162 square feet to 315 square feet.

On day one, you’ll embark in Basel. There is a Welcome Reception followed by dinner on board the ship. 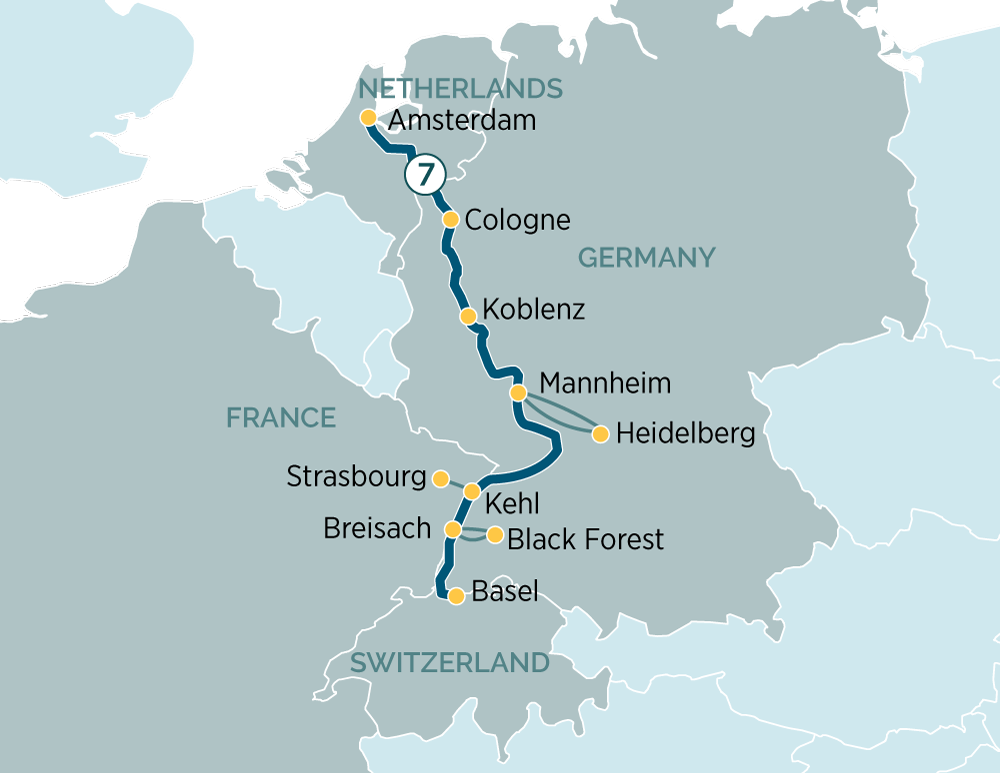 Jewels of the Rhine Itinerary. Image courtesy of Emerald Waterways.

You’ll spend day two docked in Breisach. This German city is about 40 miles north of Basel. There are three tour options available. You can visit the Vogstbauernhof Museum, which is an open-air museum with six buildings that are furnished to depict farm life in this region in the 19th and early 20th century.

Or you can take a guided hike through a village in the Black Forest.

The other option is the EmeraldPlus tour featuring a presentation about how Black Forest cake is made followed by the opportunity to sample the cake. Interestingly, the cake did not actually get its name because its produced in the Black Forest region but rather because one of its signature ingredients is fruit (cherry)-flavored brandy known as Kirschwasser.

You’ll cruise to Kehl, Germany on day three. This city is about 50 miles north of Breisach on the Rhine River and adjoins Strasbourg, France. After arriving in Kehl, you’ll visit Strasbourg by motorcoach. A guided city tour is featured, including a visit to the UNESCO World Heritage Site of Grand Ile (also known as the city centre).

On day four, you’ll dock in Mannheim, which is located at the confluence of the Rhine and Neckar rivers. You’ll take a half-day tour of Heidelberg and also have an opportunity to explore the city independently before returning to the ship.

Lunch is served onboard while your ship departs for Koblenz. Located about 93 miles northwest of Mannheim, you’ll cruise through the Upper Middle Rhine Valley also known as the Rhine Gorge before arriving in Koblenz. This region of the Rhine River is a UNESCO World Heritage Site.

While you’re in Koblenz, you’ll visit the Ehrenbreitstein Fortress. The fortress dates back to the 9th century. It’s situated on a hill about 400 feet above the Rhine River. This is the only scheduled tour for day five.

On day six, you’ll take a guided tour of Cologne and also have some time to explore the city independently. Cologne is about 70 miles northwest of Koblenz.

Your cruise will conclude in Amsterdam on day eight. After breakfast, you’ll disembark and transfer to the airport for your return trip home.

This itinerary is available from April through October.

The Majestic Rhine is an 8-day itinerary between Frankfurt and Zurich. You’ll travel the Rhine between Koblenz and Basel, which means you will not visit cities north or west of Koblenz. So destinations like Cologne and Amsterdam are not included in this itinerary. Also, even though Frankfurt and Zurich are listed, you won’t visit either city. They are merely the arrival and departure cities.

The ships for this itinerary are the same as those for the Jewels of the Rhine.

Your trip will begin in Frankfurt where you’ll board your ship on day one. After embarking, you’ll depart for Mainz, Germany. You’ll receive a Welcome Reception followed by dinner on board. 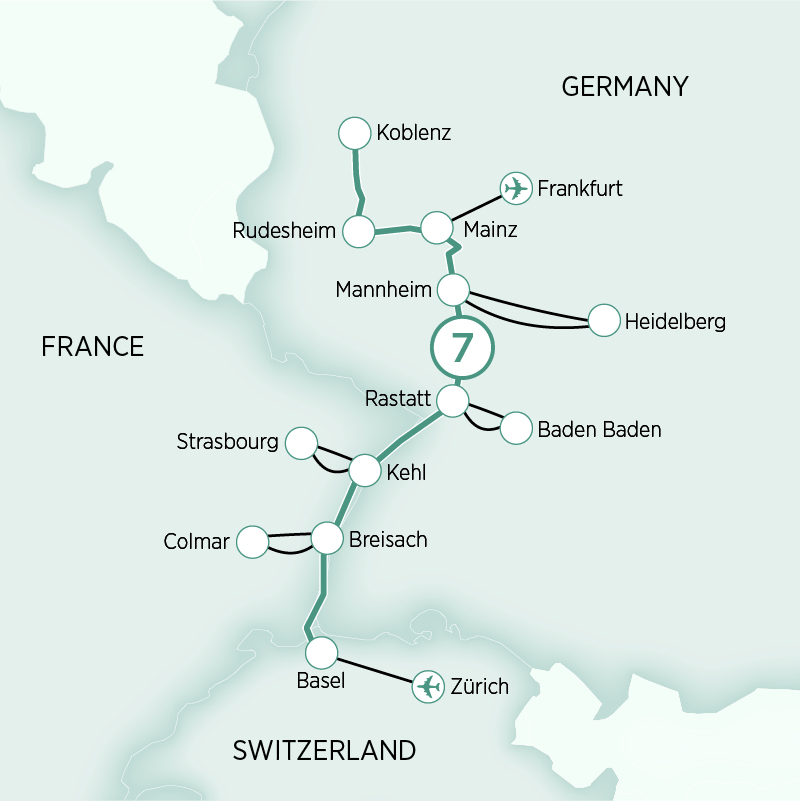 You’ll travel to Rüdesheim on day two. Featured excursions for this day include a guided tour of the city with a visit to Siegfried’s Mechanical Musical Instrument Museum. You’ll also have the opportunity to taste Rüdesheimer coffee, which is made with Asbach Uralt, a German brandy.

A gala dinner on board is also featured on day two.

You’ll spend day three in the city of Koblenz, which is located at the confluence of the Rhine and Moselle rivers. The featured excursion is a visit to the Ehrenbreitstein Fortress. The fortress is accessible by cable car and by foot. For those who enjoy hiking, it is located on a hill about 400 feet above the Rhine River.

On day four, your ship will be docked in Mannheim. You’ll travel to Heildeberg for a walking tour in the morning. Afterward, you’ll have a chance to explore the city independently before returning to the ship for lunch. Your ship will depart Mannheim in the afternoon.

You’ll sail to Rastatt on day five. This German city is located about 55 miles southwest of Mannheim. This day features a guided walking tour through Baden-Baden. Known as a spa town, this city is famous for its thermal baths. It’s located along the border of the Black Forest. You can choose to explore the Kurhaus Colonnade, or you can take a guided tour of 10th-century Hohenbaden Castle ruin.

Day six is spent in Strasbourg. Your ship will dock in Kehl, and you’ll transfer by motorcoach across the Rhine. The featured excursion is a boat tour along the canals in Strasbourg.

You’ll travel to Breisach on day seven. However, the day is spent in Colmar, France on the west side of the Rhine rather than in Germany. You can take a guided walking tour of the city, or you may choose instead to take a guided bike tour.

Your trip will conclude on day eight. After breakfast, you’ll disembark and transfer to Zurich for your return flight home.

This itinerary is only available in July and August. There is limited availability left for 2018.

So which itinerary is best for you? If you want to travel the Rhine between Basel and Amsterdam and visit the most-commonly visited cities on a Rhine River cruise, then the Jewels of the Rhine is a great option for you. Also, there’s more availability with this itinerary than with the other one since cruises are available from April through October.

If you want to travel during the summer months and you’d like something a little different but also with some of the more common destinations, then the Majestic Rhine might be a good choice for you. Even though you won’t visit Amsterdam or Cologne, you will visit a couple of other cities that are not featured in many itineraries. This package includes travel to the city of Baden-Baden. And although Rhine River cruises itineraries include travel to Colmar, many do not. Another thing to consider is availability. Since this itinerary is only available in July and August, you’ll have more limited options with available dates and staterooms.