Riviera River Cruises, a company that is based in the U.K. with offices in the United States, offers two Douro River cruise packages. Both feature the same itinerary for the river cruise portion – The Douro, Porto and Salamanca River Cruise, and one includes a few additional days in Lisbon. Let’s take a look at the two packages. 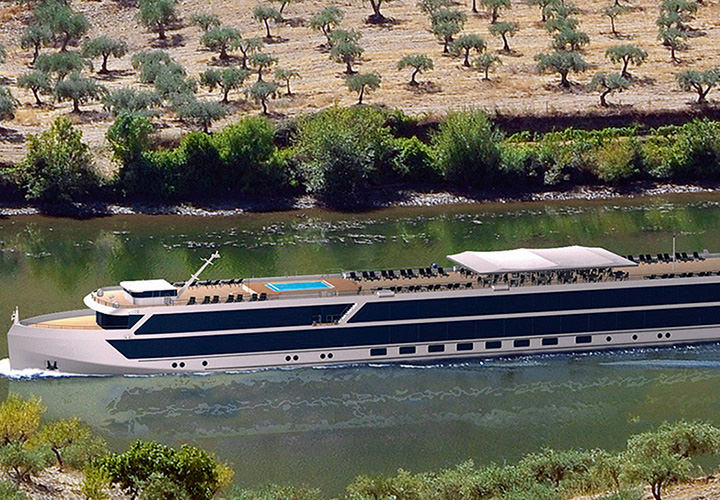 This is an 8-day itinerary operates round trip from Porto. The river cruise is included in both packages and features visits to Lamego, Castelo Rodrigo, Salamanca,  Régua, Vila Real and, of course, Porto.

As you begin your cruise on day one, you’ll embark on your ship in Porto and spend the first evening onboard where dinner will be served.

On the second day of your trip, the ship will depart from Porto and travel about 173 miles eastward to the city of Régua. After the vessel docks, you’ll travel to Lamego, which is about ten miles south of Régua. You’ll visit the Caves da Raposeira where you’ll be able to sample some sparkling wine, for which the city is famous.

There are other wine cellars along the Porto Wine Route, but another famous site that’s unrelated to wine cellars and vineyards is the Sanctuary of Our Lady of Remedies. The church is located on a hill overlooking the city of Lamego. After visiting the church, you’ll have the chance to visit a few more vineyards and sample some more local wines.

Day three features a visit to Castelo Rodrigo – a small medieval village that is located on the border of Portugal and Spain. You’ll take a guided tour of the city in the afternoon and spend the evening onboard the ship where you’ll be served dinner.

On day four, you’ll travel to Salamanca, Spain. The city is located on the River Tormes in northwestern Spain about 76 miles east of Barca d’Alva. You’ll take a guided tour of Old City of Salamanca – a UNESCO World Heritage Site. You’ll see a traditional flamenco show and then be able to explore the city independently after lunch and before returning to the ship.

Your ship will depart for Peso Da Régua on day five. After arriving in Régua, you’ll travel to a local vineyard where you’ll enjoy a traditional quinta dinner and have the opportunity to sample local wines.

Day six features a visit to the 18th-century Mateus Palace, which is located in Vila Real about 13 miles northeast of Régua. After the tour, you’ll return to your ship. Lunch will be served onboard as the ship departs for Entre-os-Rios. This city is located at the confluence of the Douro and Tamega rivers and is included in the designated UNESCO World Heritage Sites in Porto. Dinner will be served onboard.

The ship will travel from Entre-os-Rios to Porto in the morning on day seven. Lunch will be served on the ship. In the afternoon, you’ll take a guided tour of Porto. After visiting the city, you’ll return to the ship where you’ll enjoy dinner onboard.

Your trip will conclude on day eight. You’ll be served breakfast before disembarking and being transferred to the airport for your return flight home.

This 11-day itinerary begins with an 8-day river cruise that is described in the section above. However, on day eight, you’ll depart for Lisbon after disembarking. The capital city of Portugal is located about 195 miles south of Porto.

You’ll then continue to travel southward toward Lisbon passing through olive groves and wheat fields. The next attraction before reaching Lisbon is the town of Fatima. A popular tourist attraction, the Sanctuary of Fátima is a Catholic pilgrimage site and national shrine, is visited by thousands of people each year.

After arriving in Lisbon, you’ll check into your hotel for a three-night stay. Lisbon is located at the mouth of the River Tagus and is surrounded by seven hills. It is also the largest city in Portugal.

On day nine, you’ll take a guided tour of Lisbon in the morning. And in the afternoon, you’ll have the opportunity to explore the vibrant city on your own.

Day ten features a visit to the town of Sintra, which is located about 21 miles northwest of Lisbon. You’ll visit the Royal Palace. Although a museum  now, it was once home to the Portuguese monarchy.

During your tour in Sintra, you’ll also stop by the 19th-century Pena Palace. After returning to Lisbon, you’ll have the opportunity to do more sightseeing.

On the last day of your trip, you’ll check out of the hotel and then be transported to the airport for your return flight home. Pricing begins at $2,638 per person.

The comparison between the two itineraries is relatively simple because the two are identical with the exception of an extended stay in Lisbon. So if you’re interested in taking a shorter trip with a river cruise only, The Douro, Porto and Salamanca River Cruise is the best option. And if you’d like to spend a few more days in Portugal visiting Lisbon after your river cruise, then the second itinerary would be a better choice.