AmaWaterways offers two packages on the Douro River – the Enticing Douro and Flavors of Portugal & Spain. There are some similarities between the two but also a few differences. So let’s take a look at each of the AmaWaterways’ Douro River Cruise itineraries. 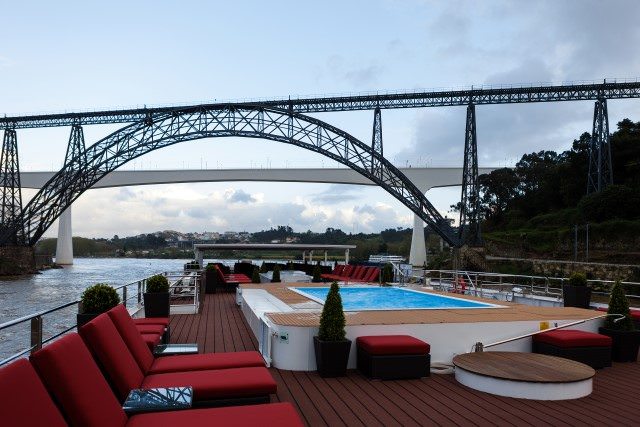 Kick back and relax on the Sun Deck, or go for a dip in the pool aboard the AmaVida. Photo courtesy of AmaWaterways.

This is a 7-night itinerary that travels round trip from Porto. There are a few cities visited while heading east toward Vega Terrón, including Régua and Barca d’Alva, just a few minutes from Vega Terrón. During the return trip back to Porto, you’ll visit Régua a second time and also spend some time in Pinhão.

The second day of the cruise features a trip to the city of Lamego, which is about 10 miles southwest of Régua. There are two options. You can either take a walking tour of the city or choose the Lamego Steps Hike. At the end of the tour (whichever you choose), you’ll have the opportunity to sample some local traditional foods as well as sample some sparkling Portuguese wine. 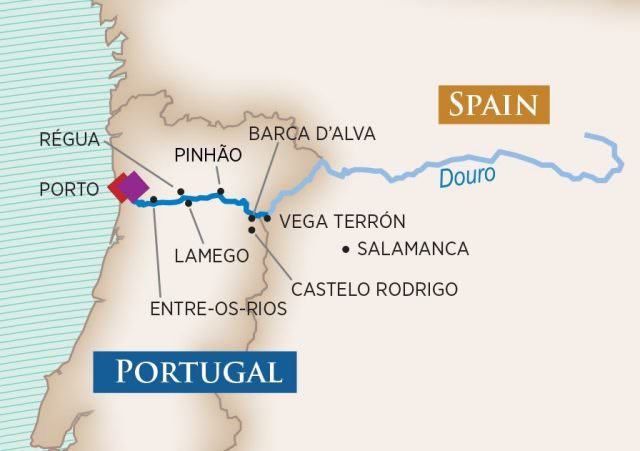 On day three, the ship docks in Barca D’Alva where you’ll enjoy a trip to the small medieval village of Castelo Rodrigo. Again there’s a choice between a walking or hiking tour of the city.  Castelo Rodrigo is about 17 miles south of Barca d’Alva.

The AmaVida remains in Barca d’Alva overnight. Day four features a trip to visit the UNESCO World Heritage Site of  Old City Salamanca in Spain followed by a Flamenco Show in the evening.

As the ship begins its return back toward Porto on day five, the first stop is in the city of Pinhão where you’ll spend the day at Quinta da Avessada in Favaios, Portugal, which is about 8 miles northeast of Pinhão. This are is another UNESCO World Heritage Site known as the Alto Douro Wine Region.

After departing Pinhão, the next stop is back in Régua for the day. Shore excursions for day six include a visit to the Mateus Palace and a tour of the garden and estate of Quinta de Aveleda where you’ll have a chance to sample local wines and cheese. These destinations are about 20 miles northwest of  Régua.

Back in Porto on day seven, you’ll have two excursions to choose from – a city tour  or a hiking tour  of Porto followed by a visit to Graham’s Winery where you’ll be able to sample local wines.

The cruise concludes on day eight in Porto where disembarkation takes place.

Cruises are available from April through November.

This itinerary is similar to the Enticing Douro with regard to ports of call and destinations that are visiting; however, it’s between Porto and Vega Terrón.

Travel is also on the AmaVida as noted in the Enticing Douro section.

Embarkation also takes place in Porto where the cruise begins. The ship docks in this city for two nights before traveling east toward Spain.

The first day is spent aboard the ship. On day two, you’ll venture out to tour the city of Porto and also visit Graham’s winery for wine tasting. Porto is another UNESCO World Heritage Site referred to as the Historic Centre of Oporto, Luiz I Bridge and Monastery of Serra do Pilar.

Day three begins in Porto with a trip to the historic city of Guimarães. And later that day, you’ll visit Quinta da Aveleda to sample local wines. 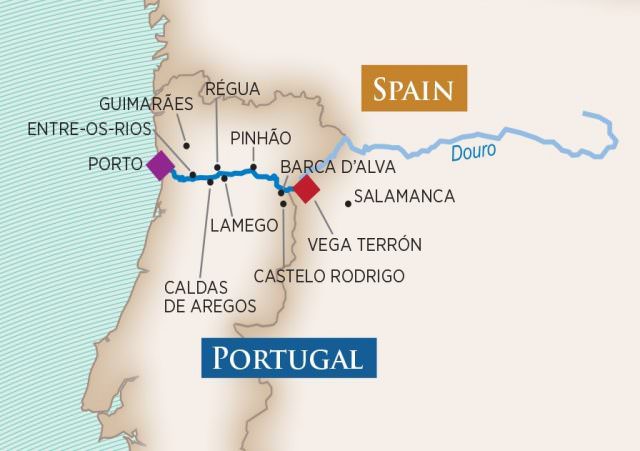 After departing Porto, the AmaVida docks in Régua for two nights.  Day four features a trip to Mateus Palace; and on day five, you’ll tour the city of Lamego and have the opportunity to sample local food and wines.

The next stop is in Pinhão where you’ll spend two nights. You’ll spend the sixth day of the cruise visiting Quinta de Avessada where you’ll enjoy lunch. The excursion also includes a private tour of the Quinta do Seixo wine cellar. And of course, you’ll be able to sample some wines.

On day seven, you’ll spend part of the day enjoying the scenery as the AmaVida heads toward Vega Terrón for the last two days of the trip. After arriving in Vega Terrón, you’ll tour Castelo Rodrigo and have a chance to try some of the local foods.

Day eight is the conclusion of the trip and is where disembarkations takes place.

Cruises are available between April and October (November in 2019).

How are these two itineraries similar? Well, they visit most of the same ports and destinations. But there are a few differences, which we’ll look at in a minute. A few more similarities are that they’re both seven-night cruises; pricing is about the same and cruises are available during the same months.

Now, let’s look at some of the differences. This has already been stated, but it’s worth noting again – the Enticing Douro is round trip from Porto and the Flavors of Portugal is one way from Porto to Vega Terrón.

Another difference is that the ship docks in each city for two or three nights for the Flavors of Portugal cruise but spends only one night in most cities for the Enticing Douro itinerary.

With regard to destinations visited, both packages visit most of the same cities and sites; but the Enticing Douro visits Barca d’Alva and the Flavors of Portugal cruise does not.

So if you want to spend more time in each city, the Flavor of Portugal would be the best option. And if you want to return to Porto, the Enticing Douro is a better option.

Videos from our 2014 voyage on AmaVida on the Douro