AmaWaterways has thrown away the river cruise rule book, particularly the chapter on size restrictions. When the company’s AmaMagna debuts in 2019, she’ll be twice the width of traditional river ships. That extended width puts her in another league altogether. AmaMagna arguably will have as much in common with small luxury cruise ships as with river cruisers. That raises an enticing prospect. Ocean cruisers who may have been reluctant to river cruise because of the ship’s cozy confines may find that AmaMagna is the perfect fit. Indeed, AmaMagna is poised to herald in a new era of river cruising that is as close as it gets to small luxury ocean ship cruising. 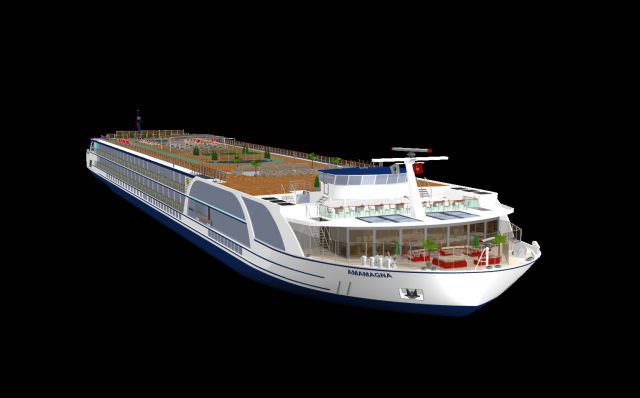 A rendering of AmaMagna. At 72 feet across, she is roughly twice as wide as the company’s existing river cruise vessels. Measuring 443 feet long and managed by a crew of 70, AmaMagna will be able to transport 196 guests along the Danube in a kind of comfort not previously known. Rendering courtesy of AmaWaterways

Particularly noteworthy is that AmaMagna’s increased width is allowing AmaWaterways to up the accommodations game. The smallest stateroom – the Category E fixed window riverview staterooms on Lower Deck – will measure 205 square feet, while Category AA and AB Balcony Staterooms will come in at 252 square feet. That’s larger than the average balcony stateroom on most oceangoing cruise ships.

Things get more spacious from there. Category AS and BS accommodations are 355 square feet apiece. AmaMagna’s top-of-the-line Category OS Suite is a sumptuous masterpiece offering 710 square feet of space with two bathrooms, a full-size bath tub, a spacious balcony, and separate living and sleeping areas.

To put that all into perspective, the average river cruise ship cabin runs from about 160 square feet to slightly more than 200 square feet. Suites are larger on river cruisers, but nowhere near the size of the massive Category OS Suite that AmaWaterways has planned for AmaMagna.

AmaWaterways has designated some staterooms as interconnecting rooms, with an interior door that can be opened to allow friends and family traveling together to access each other’s staterooms. These rooms are denoted on the ship’s deck plans.

AmaWaterways is also taking the opportunity with AmaMagna to offer numerous and diverse public spaces that, for the first time, are spread across three decks. Billed as the largest river cruise ship in Europe, AmaMagna will house an intimate Wine Bar and the Chef’s Table Restaurant on its lowest deck. Up one deck to Main Deck is the ship’s Reception Lobby and Main Restaurant, which is situated forward of the lobby.

On Upper Deck, AmaWaterways has placed an Al Fresco Lounge forward of the ship’s Main Lounge at the bow of the ship; while at the stern, guests will find a Fitness Room, Hair Salon and Massage Treatment Room. The Sun Deck will house numerous sun loungers, a Swimming Pool and a Hot Tub, alongside a Jogging Track. An elevator will provide access throughout most decks.

Upon first glance at the deck plan, the public rooms look shorter than on previous river cruise ships. There is a good reason for that: Thanks to the ship’s increased width, public rooms don’t need to be as deep as they did on narrower ships.

AmaMagna is poised to be a game-changer, not just for AmaWaterways, but for the river cruise industry as a whole. Because of her large size, she will not be able to relocate to other rivers, or do larger runs like Amsterdam to Budapest. Instead, she’ll make her home on the Danube, purpose-built to deliver a sumptuous product there that, we predict, will be a big hit with new and experienced river cruisers – as well as small ship ocean cruisers whose ship appears to have finally arrived.