You are here: Home / All Inclusive River Cruises / Airport Transfer Fees / In Bordeaux, The Exceptional All-Inclusiveness Of Scenic River Cruises 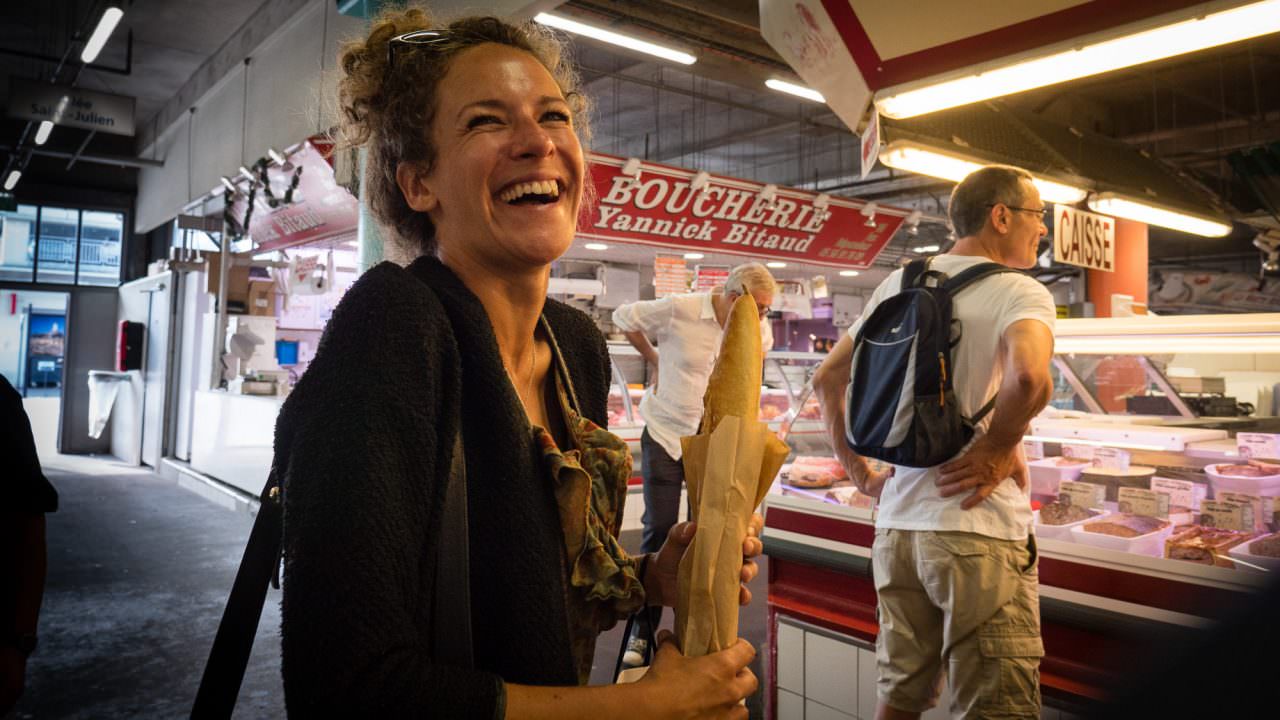 Scenic’s inclusions are all-encompassing. In Bordeaux, the company recently added Scenic Culinaire, a complimentary cooking class that on my voyage included shopping with the chef at a local market and preparing dishes using those ingredients back on board Scenic Diamond. Pictured: Our guide in a local market in Bordeaux. © 2017 Ralph Grizzle

Looks can deceive. Rarely, for example, will Scenic appear as the lowest-priced operator when comparing river cruises on similar itineraries. In my story, What Scenic Does Differently In Bordeaux, Scenic’s per diems for eight-day Bordeaux itineraries were considerably higher than AmaWaterways (by 28 percent), CroisiEurope (by 90 percent) and Viking (by 45 percent). On some sailings, Scenic’s per diems in Bordeaux approach $700 per person, compared to Viking at $481 per day. At first, I thought, “Wow, Scenic is over-the-top,” even though Uniworld came in higher (nearly $750 per day in staterooms that are a third smaller). A closer look at the numbers, however, reveals a much different picture than what I saw at first glance.

When comparing Bordeaux and other river cruises throughout Europe, you’ll want to calculate the total cost, derived by looking at all the inclusions and special offers. For example, are there air incentives? The cost of air can have a huge impact to the bottom-line price of a river cruise.

On its website, Viking prices roundtrip economy air at $1,595 between select North American gateways and Bordeaux. That fare seems consistent with what I am able to find by searching Google Flights for May and June 2018 airfares between Atlanta and Bordeaux. Tacking on air at $1,595 per person adds an effective daily cost of nearly $200 per person for an eight-day Bordeaux cruise.

You’ll also want to calculate other incentives. Those pay their Scenic sailings in full by October 31,  2017, will save an additional $500 per couple on 8 to 10 day salings and $1,000 per couple on 11+ day sailings. Uniworld is offering a 10 percent savings for those who book before September 30, 2017. AmaWaterways is offering savings of up to $750 per person on select Bordeaux departures in 2018. These too have an impact on the bottom-line per diem.

Then there are the inclusions to consider. Does your river cruise include port charges, transfers (even if you book air on your own), tips (both on ship and on shore), complimentary beverages for the duration of your cruise, laundry?

In the chart below, I’ve tried to find the true, bottom-line per diems for river cruise companies operating in Bordeaux. I’m basing estimates on my own experiences. And while I am singling out Bordeaux river cruises, it’s likely that the same pattern will hold true on other river cruises throughout Europe (I do intend to publish similar analysis for the Seine, Rhone/Saone, Douro, Rhine and Danube).

Comparative spring 2018 pricing for Bordeaux eight-day river cruises in similar staterooms across the five operators in the Bordeaux region. I looked for staterooms of equivalent size and features, namely those with French balconies or step-out balconies. CroisiEurope's two ships in Bordeaux feature only 140-square-foot staterooms with fixed windows that open, which for some travelers, would suffice. Uniworld's River Royale also featured many fixed windows along with French balconies in 140-square-foot staterooms. Prices were obtained from cruise company websites and may not reflect current incentives. Additional charges were estimated in some cases, such as for laundry and beverages, and obtained from the cruise company websites.

* Viking includes at least one shore excursion in each port of call, with optional excursions for a fee.

Scenic strives to be the most inclusive of all river cruise companies. The net effect of Scenic’s inclusions and incentives is that the per diem for the Bordeaux sailing cited is $261 per person less than the published rate. So instead of $698 per day. It’s $437 per day.

Gratuities (both on Scenic Diamond and on shore) and 24/7 bar are included as is laundry service (limited to one bag for most categories) and nearly everything else you can think of. Scheduled transfers are included, regardless of whether or not you book your air with Scenic. Staterooms feature butler service, room service (breakfast, lunch, dinner and snacks) and Scenic’s Sun Lounge, which I wrote about on another Scenic cruise. See Scenic Cruises Jasper, Day 2, Focus On The Sun Lounge. 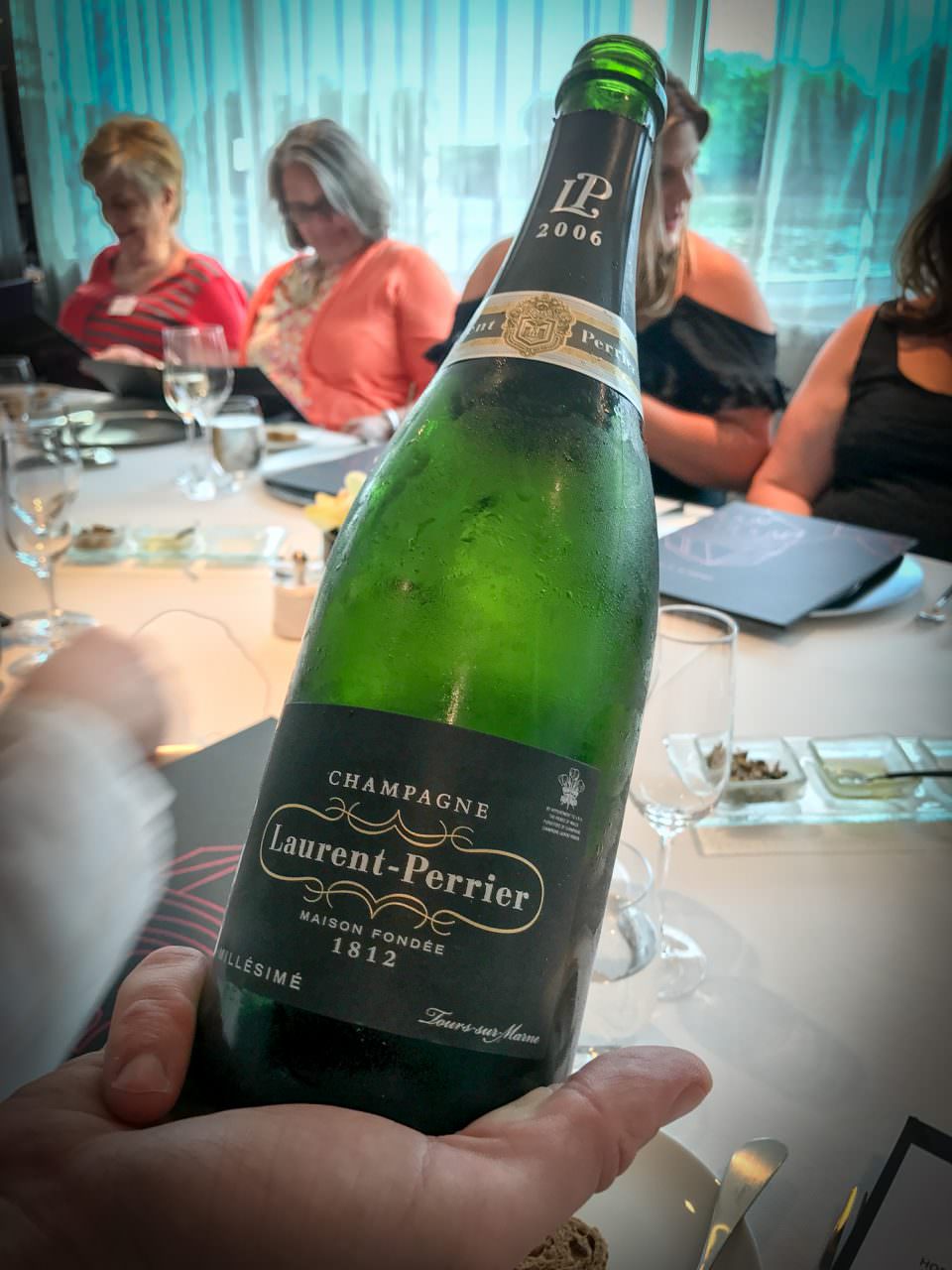 Fine wines and champagnes are included on Scenic. © 2017 Ralph Grizzle

Additionally, Scenic includes Scenic Tailormade, a GPS-based system for self-guided touring and on-board commentary; eBikes, electronically assisted bikes for independent and guided tours; Scenic Enrich, which the company bills as “unforgettable and exclusive once-in-a-lifetime experiences”; Scenic Sundowners, exclusive hosted cocktails in some of Europe’s most beautiful locations; and Scenic Freechoice, a choice of “engaging activities throughout your journey.”

Scenic’s primary competitor in Bordeaux is Uniworld, which has a similar roster of inclusions, just not as broad. Uniworld includes scheduled transfers between the ship and airport, farm-to-table dining onboard, unlimited beverages – including premium spirits and wines, bicycles, Nordic walking sticks, gratuities, onboard fitness classes – like yoga and TRX – ship-wide Wi-Fi and exclusive shore excursions in each city. At $475 per person, Uniworld’s Bordeaux per diems are also appealing, but with its larger staterooms and newer ship in Bordeaux, its broad range of inclusions and multiple dining venues, and its lower per diems, Scenic provides what for many will be the best value in France’s gorgeous Aquitaine region.

Also see In Bordeaux, What Scenic Does Differently