Emerald Waterways christened the latest addition to its growing fleet of river ships, Emerald Radiance, in Porto, Portugal, where the ship will sail on the Douro River. Gill Williams, a UK travel agent with cruise specialist Cruise Village, served as Godmother. 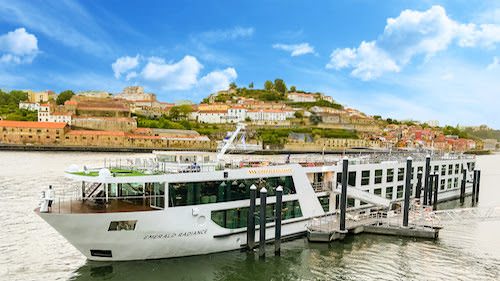 2017 marks a busy year for Emerald Waterways, in which the river cruise line has welcomed three innovative new Star-Ships to its fleet, bringing the total number of ships to seven. Emerald Destiny was christened last month in Vienna and Emerald Liberté is scheduled to be christened in Lyon, France in September.

Radiance is the river cruise brand’s most intimate ship to date, with a capacity of 112 guests and a crew-to-guest ratio of 1:3. A new category of stateroom, the Riverview Suites, are located at the rear of the ship on the Horizon Deck and will boast 300 square feet of living space and panoramic floor-to ceiling windows on two sides. A serenity pool on the sun deck provides an ideal spot for relaxation as well as for cooling off under the warm Iberian sun. Guests have a choice of two restaurants—Reflections, the main dining room, and The Terrace for light breakfast and lunch. All ships also feature an onboard hairdresser, massage therapy room and fitness area.

Emerald Radiance will explore Portugal’s Douro region, known for its steeply sloped valleys dotted with vineyards and quaint, historic villages. The eight-day Secrets of the Douro cruise sails round trip from the Northern Portugal city of Porto. Highlights include a day trip to Spain’s Roman city of Salamanca, the seat of the Spanish language and a historic city dating back to medieval times; an excursion to the Coa Valley Prehistoric Museum in Pocinho, where guests can view stone carvings made by early inhabitants of the Douro followed by dinner at a traditional local wine estate; an excursion to Mateus Palace, the historic icon depicted on the labels of Portugal’s famous rose wine; and a city tour of Porto, including the numerous wine caves of Vila Nova de Gaia.