In Amsterdam, Avalon Waterways invited a group of us to try its newest offering, an Active Discovery experience where a skeptic learned to appreciate painting. 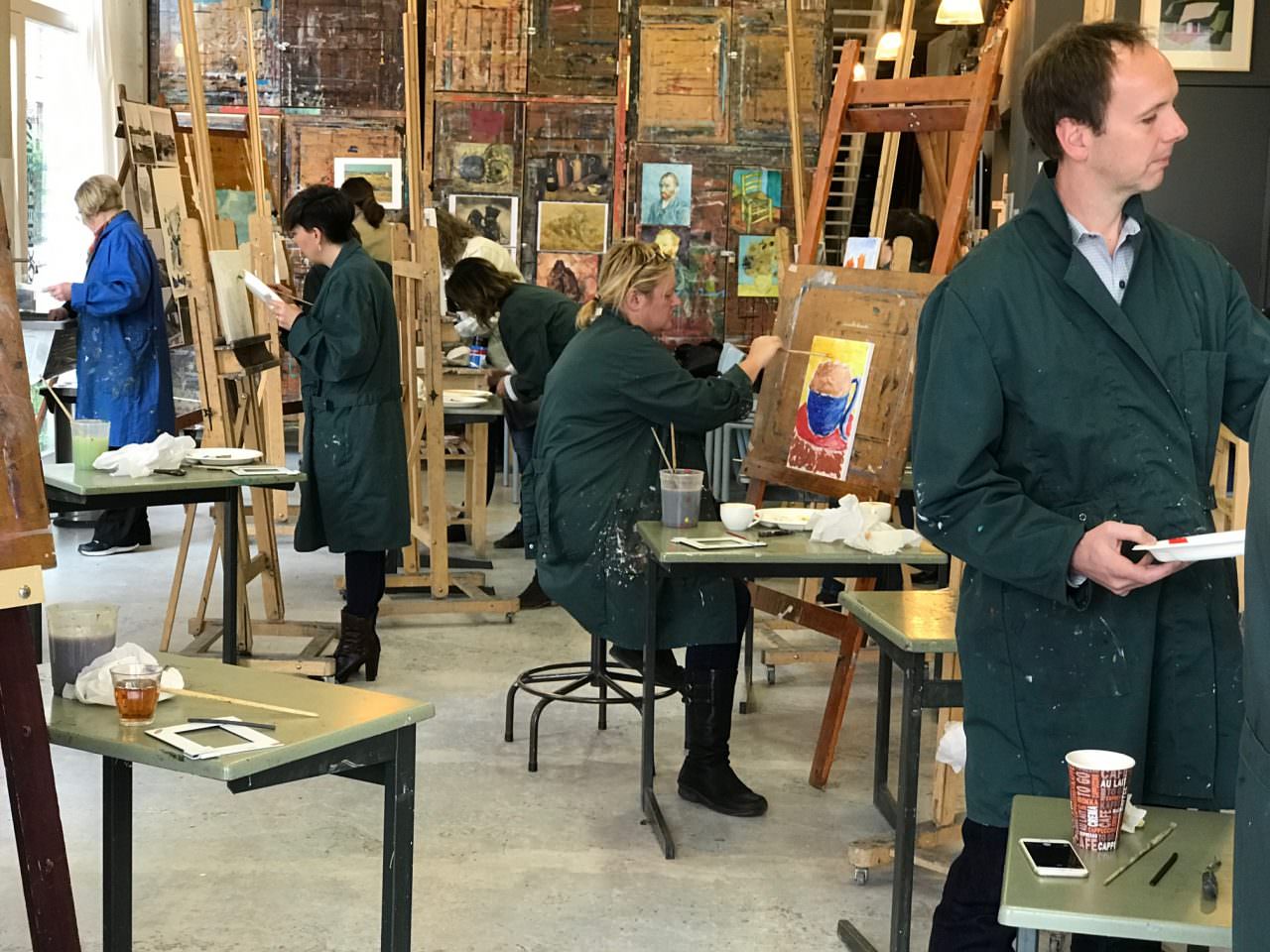 Our group gets to work in Ateliers Westerdok in Amsterdam. © 2017 Ralph Grizzle

Amsterdam, April 12, 2017 — The skeptic in me thought it would be boring. A painting workshop. I’m not a painter. Why would I want to waste my time putting a brush to canvas when all of Amsterdam was out there for me to explore? I wasn’t alone in my thinking. A colleague of mine confessed that he too was not terribly excited about the afternoon excursion that our host, Avalon Waterways, had graciously organized for us. It wasn’t that we weren’t appreciative. It was just that painting was not our forte. Nor was it an aspiration or even something I would consider taking up as a hobby. That all changed one afternoon in Amsterdam.

Something connected with me in an artist workshop situated in an area called Westerdok, where more than a dozen of us spent a few hours learning a bit about the life, and technique, of one of the Netherlands’ most famous sons, Vincent Van Gogh.

The prolific post-Impressionist painter created 2,100 pieces of art in a single decade before committing suicide at the age of 37. Imagine. In a span of ten years, Van Gogh created an enduring legacy. What legacy will I leave? Certainly, it causes one to think.

All around us in the Westerdok studio were paintings by Van Gogh. Van Gogh likely could have stood on the very ground that I was standing on at this moment. When visiting Amsterdam in October of 1885, Van Gogh sat in the waiting room of a railway station here (it was demolished in 1889 when the city’s Central Station opened). The artist had traveled to Amsterdam to see the then new Rijksmuseum, pausing while waiting for his train to create two small sketches, View of Amsterdam from Central Station and View of Amsterdam, De Ruyterkade (a view from the back of the building). Both sketches were damaged on his journey home, yet he sent them to his brother Theo, with this note:

“To my regret, the two little sketches of Amsterdam are quite badly damaged. They got wet on the journey; then the little panels warped when they dried, and dust got into them. I’m sending them all the same to show you that if, in the space of an hour, I want to dash off an impression somewhere, I’m beginning to be able to do this in the same sentiment as others who — analyze — their impressions. And give themselves a reason for what they see. This is something other than feeling, that’s to say undergoing impressions — there may perhaps be a great deal between experiencing impressions and — analyzing them, that’s to say taking them apart and putting them together again. But it’s enjoyable to put something down in a rush.”

Within five years of writing the note to his brother, Van Gogh would be dead, yet his output during his last years would be impressive. He created art that was original and distinctive. Now it was our turn.

After some brief instruction presented by Russian artist Tatyana Yassievich, a baker’s dozen of us stationed ourselves in front of easels with paints and brushes and still-life images for inspiration. We were free to paint whatever we wished, sketching first with charcoal pencils, then applying oils in bold strokes, just as Van Gogh did. I decided to paint one of my Van Gogh favorites, sunflowers.

In February of 1888, ill from too much drink and suffering from smoker’s cough, Van Gogh moved for therapeutic reasons to Arles, in the south of France. While there, he created 200 paintings and more than a hundred drawings and watercolors. It was in Arles that Van Gogh painted his sunflower series.

I was both surprised and delighted as I watched my still-life emerge on the blank canvas before me. I was intrigued by the notion that I could dab my brush in a dollop of paint, then brush strokes on a white canvas, infusing the lifeless space with color. As I was painting, I realized that the skeptic in me had been a manifestation of fear. Inwardly, I worried that my painting and my technique would not be good enough, for me or anyone who saw my painting. It was with a sigh of relief that I realized that there were no hard and fast rules. What appeared on the canvas was simply my interpretation of what I saw before me.

Tatyana and her Dutch colleague visited each of us to comment on our work and to show us techniques that Van Gogh used. Tatyana had words of praise for my painting of sunflowers, as she did for everyone’s paintings, “but,” she said … and then she showed me a few techniques that Van Gogh mastered, such as purposely painting the background with deliberate brush strokes. She spent some time to show me the technique in the artist’s self portrait that hung on a wall nearby. Yes, the background was as much a work of art as the portrait, something I had not noticed until now, though I had seen the painting many times.

Nearly a century after Van Gogh’s death, a Japanese insurance magnate by the name of Yasuo Goto paid nearly $40 million for Van Gogh’s “Still Life: Vase with Fifteen Sunflowers.” No other work of art in history had fetched such an extravagant sum. Suddenly, the world had discovered Van Gogh’s Sunflowers series.

My technique could never come close to matching Van Gogh’s, but I found myself enjoying painting much more than I had thought I would. The three-hour workshop made me think that I would not mind taking up painting as a hobby back home. Whether I will do that or not remains to be seen, but I can say that I thoroughly enjoyed painting that afternoon in Amsterdam, and I am proud of the canvas that I will take home with me as a memory. 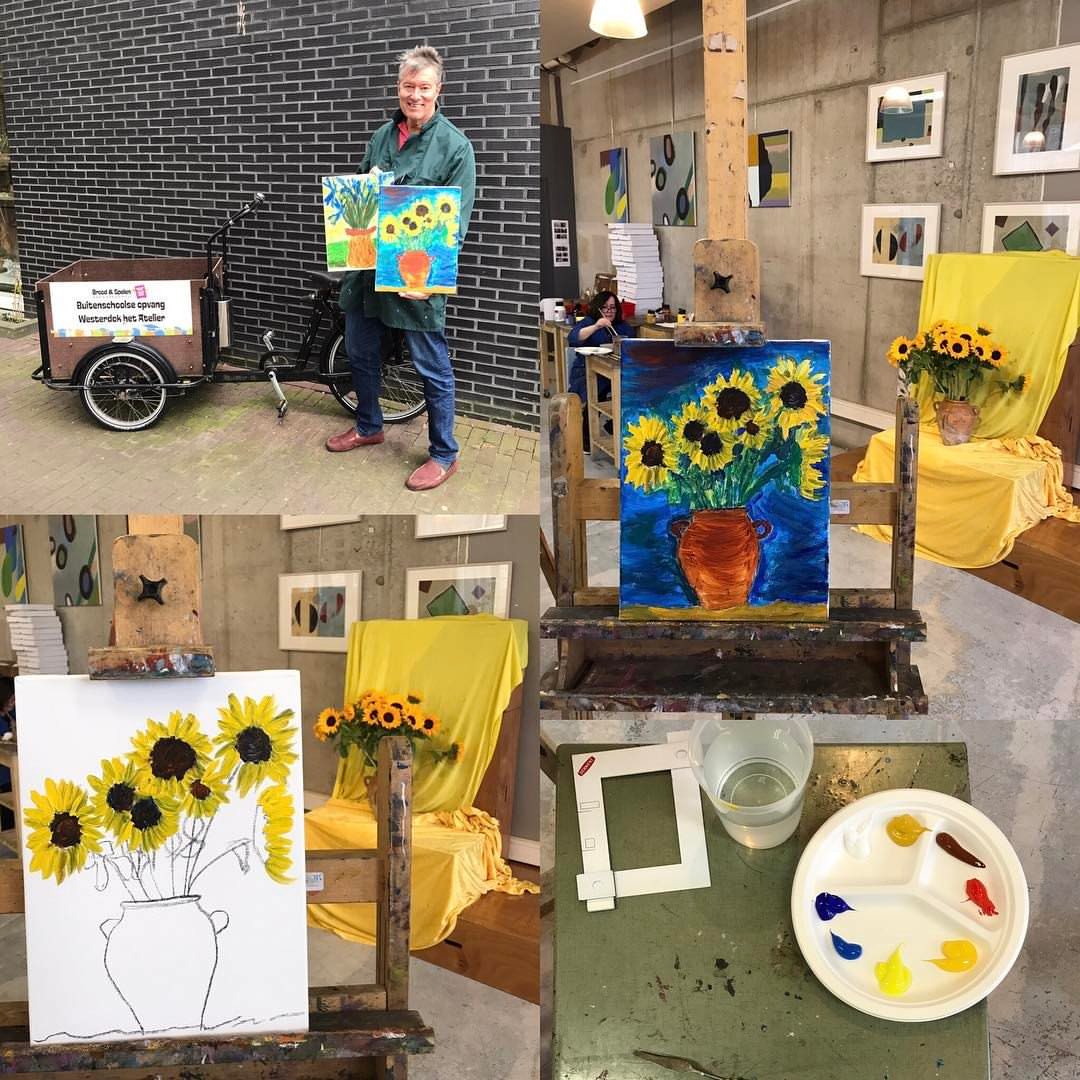 My day as an artist in Amsterdam, thanks to Avalon Waterways.

Avalon Waterways says its Active Discovery cruises are focused on engaging its guests in the unfamiliar. The company is striving to give those who desire it, the opportunity to become more than spectators during their travels in Europe. Avalon’s new Active Discovery river cruises hold the promise of authentic and immersive experiences. And on this day in Amsterdam, the company delivered on that promise. Who knew, certainly not me, that I could paint a vase of sunflowers in the spirit of Vincent Van Gogh? 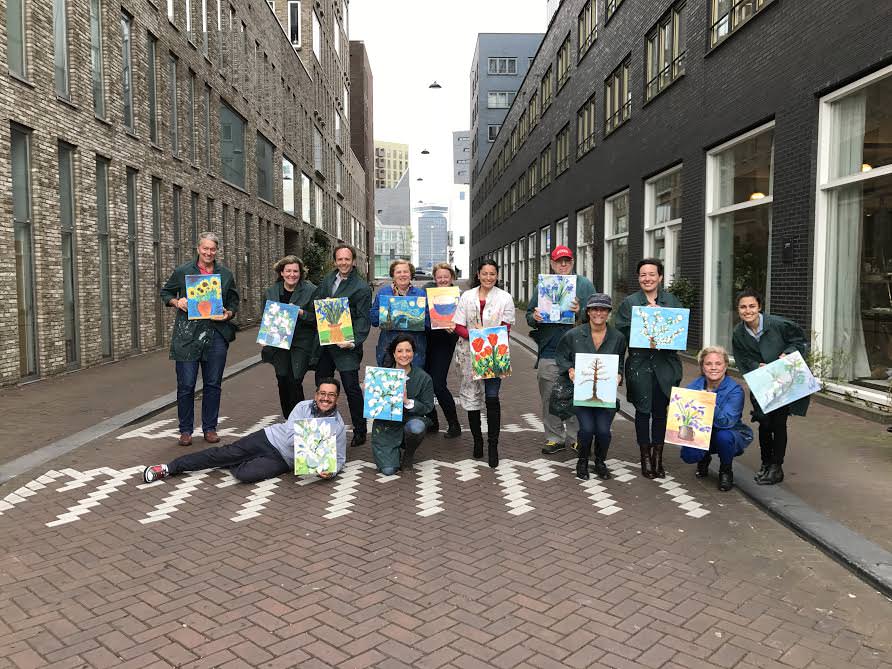 Our group on an Avalon Waterways’ Active Discovery experience. We put our brushes to canvas in Amsterdam today to paint in the spirit of Vincent Van Gogh.

Avalon’s Active Discovery Cruises are offered on the Rhine (8 days Amsterdam to Frankfurt or the reverse) and Danube (9 days between Budapest and Linz).

Special thanks to Van Gogh Route, for the Van Gogh letter to his brother Theo that appeared earlier in this post.