Viking River Cruises welcomed two new additions to its fleet. During a celebration that took place at the confluence of the Rhine and Moselle rivers in Koblenz, Germany, Viking Hild and Viking Herja were officially christened by ceremonial godmothers. Viking Hild will sail the Rhine River this spring on Viking’s new Paris to the Swiss Alps itinerary, and later this year both new ships will sail Viking’s Danube Waltz and Rhine Getaway itineraries.

“The naming of a new ship by a ceremonial godmother is a sacred maritime tradition. We are honored that the godmothers of our two new Longships are also important partners who will help us deliver thoughtful and enriching experiences for Viking guests this year,” said Torstein Hagen, Chairman of Viking Cruises. 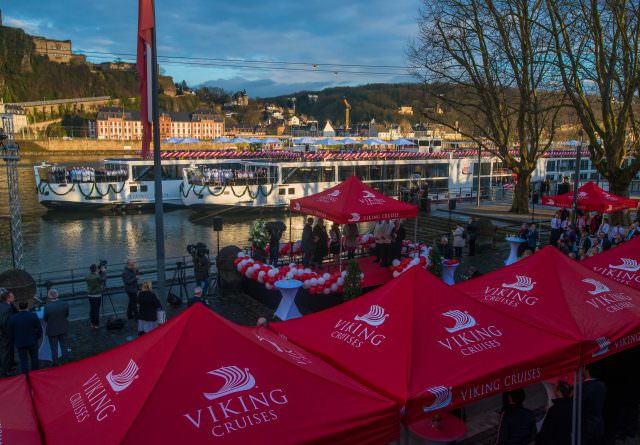 The Viking Hild and Hjera at their christening. Photo courtesy of Viking Cruises

In keeping with a maritime tradition that dates back thousands of years, Viking invited two prominent women to serve as honorary godmothers to the new ships.

Godmother to Viking Herja, Debbie Wiseman MBE is an award-winning British composer and conductor with more than 200 credits including recognizable compositions from both the small and big screen.

Since their debut, Viking Longships have amassed consumer and industry acclaim. The Viking Longships integrate a patented corridor design and cutting-edge technology with comfortable amenities that reflect guest preferences and current travel trends. These features include a all-weather indoor/outdoor Aquavit Terrace that brings the panoramic outdoor river scenery indoors.

Accommodating 190 passengers in 95 staterooms, Viking Longships have two Explorer Suites – the largest river cruise suites in Europe – as well as seven two-room Veranda Suites with a full-size veranda in the living room and a French balcony in the bedroom; 39 Veranda Staterooms with full-size verandas; and 22 French Balcony Staterooms.