Editor’s Note: This past September, writer and photographer K.D. Leperi cruised with Viking River Cruises on its itinerary “France’s Finest.” Her journey on the Buri was the second week of a 15-day cruise.

First, let me make it abundantly clear that I love France. I even took French as my second language in high school and while at college because the sounds and words effortlessly roll off the tongue with a melodic refrain that is both pleasing and dare I say, romantic. And of course there is the food, wine, and great French cheeses and some of the greatest art treasures and palaces in the world.

So it was that in the wake of the heinous terrorism episodes on France in 2015, I vowed to show my solidarity. I would travel to France in the aftermath, to be part of a resistance movement that won’t let the freedom-to-travel be chained. It was, with that in mind, that I booked a Viking cruise of “France’s Finest.” For 15 glorious days I sampled the best of both northern and southern France, from Paris and the heart of Normandy to Lyon and Provence: It proved to be an unbeatable combination – a tour de force.

This review is regarding the second week of the cruise on Viking’s Buri – a sister ship to the Rolf. Built and rolled out in 2014, the Buri longship is 443 ft. with 4 decks and a crew of 50. Guest capacity is 190.

The longship was named after Buri – the first mythological Norse God. He was not of man or woman but rather a giant cow. The legend goes that as the cow named Audumbla licked salty blocks of ice, the shape of a man began to emerge. As Buri was formed, she continued to nourish him with her milk.

The Viking Buri cruises on the Saone and Rhone rivers in France, with departures from Lyon and Avignon. Designed as a “green ship” by architects Yran & Storbraaten, it features solar panel, an organic herb garden, and hybrid energy-efficient engines.

Atrium (Decks 2&3)
Upon entering the ship, you will be dazzled by the spacious and contemporary-styling of the atrium-style lobby. It’s light and airy with chrome and light woods that accentuate the grand staircase. Open risers compliment the airiness of the great room concept.

Executive Chef Dimitris Sidiropoulos says he always wanted to be a chef: it was his childhood dream. With his grandmother serving as his main inspiration, he studied classical cuisine at Le Monde, after taking a brief detour and serving as an officer for seven years in the military. These days he says he brings his military discipline to the kitchen to ensure the absolute best in quality food, professional cooking, and artistic presentation. He believes in taking good care of his team as he views all members as his kitchen family.

When asked about what is important to him, Chef Dimitris said, “My happiness comes from preparing real food with real flavors.”

Some of my favorite appetizers and entrees from Chef Dimitris’s menu are: 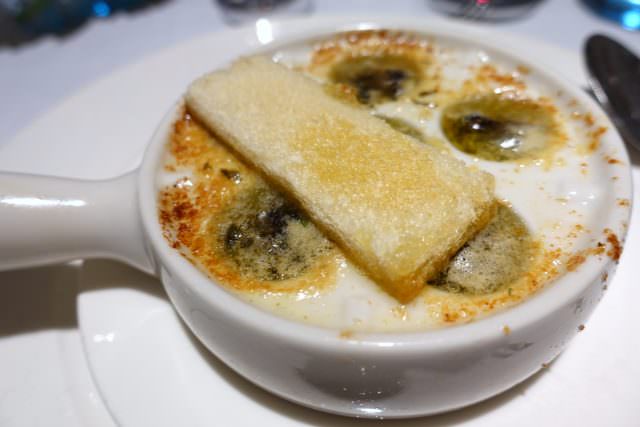 Optional Excursions are ideal for pursuing passions and have additional fees. A sampling of my optional tours included: Truffle Hunt & Goats Cheese Farm, Timeless Town of Perouges, Cowboys of the Camargue, and the Taste of Provence – a food tour.

I visited Perouges as an optional Viking tour, because I couldn’t resist exploring the most beautiful French medieval town. Built high on a hill with the French Alps as a backdrop, this medieval village built of stone is one of the best preserved in France. With towering walls that enclose the town along with cobble-stone streets, it doesn’t get any more authentic than this. 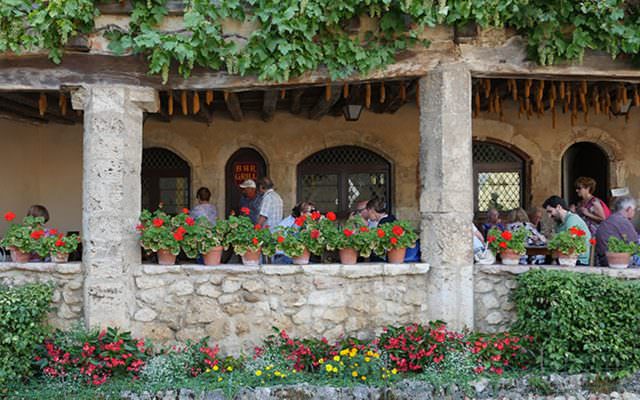 There are several restaurants, gift stores, as well as places to stay, but our guide mentioned the lack of night life within the walls. But we were here for the afternoon only. After negotiating uneven streets and alleys, our guide treated us to the local “Galette de Perouges” at one of the restaurants. (This is a local specialty best described as a sugar pizza.)

From an ancient Roman Amphitheatre (Les Arenes) in Arles that once featured chariot races to Avignon Less Halles where you taste Provencal products to your heart’s delight, Provence is a place where the unusual is a part of everyday life.

One of the more unusual was my optional excursion to the Camargue. The Camargue river delta in southern France is a place where French cowboys, white Camargue horses, and black bulls run unfettered along the coastlines and marshy wetlands. The Provencal cowboys are called “gardians” and have traditionally taken the Camargue horses as their mount to herd black bulls for their famous bull festivals (they do not kill the bulls).

After a demonstration of triage, our group was treated to a delicious meal of “daube” – a Provencal beef stew cooked and seasoned with herbs de Provence along with a local side dish of ratatouille. Later, we stopped at Aigues Mortes – which translates as “dead waters” due to the surrounding marshes. It is a well-preserved walled medieval town once a port in the days of Saint Louis (Louis IX). Nowadays, the actual town is several miles inland due to the accumulation of silt over the years. It harbors dozens of shops, boutiques, and sidewalk cafes.

After shopping for all things Provence like lavender, sea salt, herbs de Provence, rice, and the ever popular Nougat de Montelimar, we headed back to our longboat, the Viking Buri. Along the way our guide sincerely thanked us for coming to France, especially this year as she poignantly noted that others chose to stay home. She added with heartfelt emotion, “We welcome you and honor you as the resistance.”