The rain is streaming down the windows, and I’m staring out at the massive red paddlewheel aboard American Queen Steamboat Company’s American Empress as it churns up the dark-grey waters of the Columbia River. We’re bound for Astoria, Oregon on this Thanksgiving afternoon; just one of four ports of call we’ll visit this week. 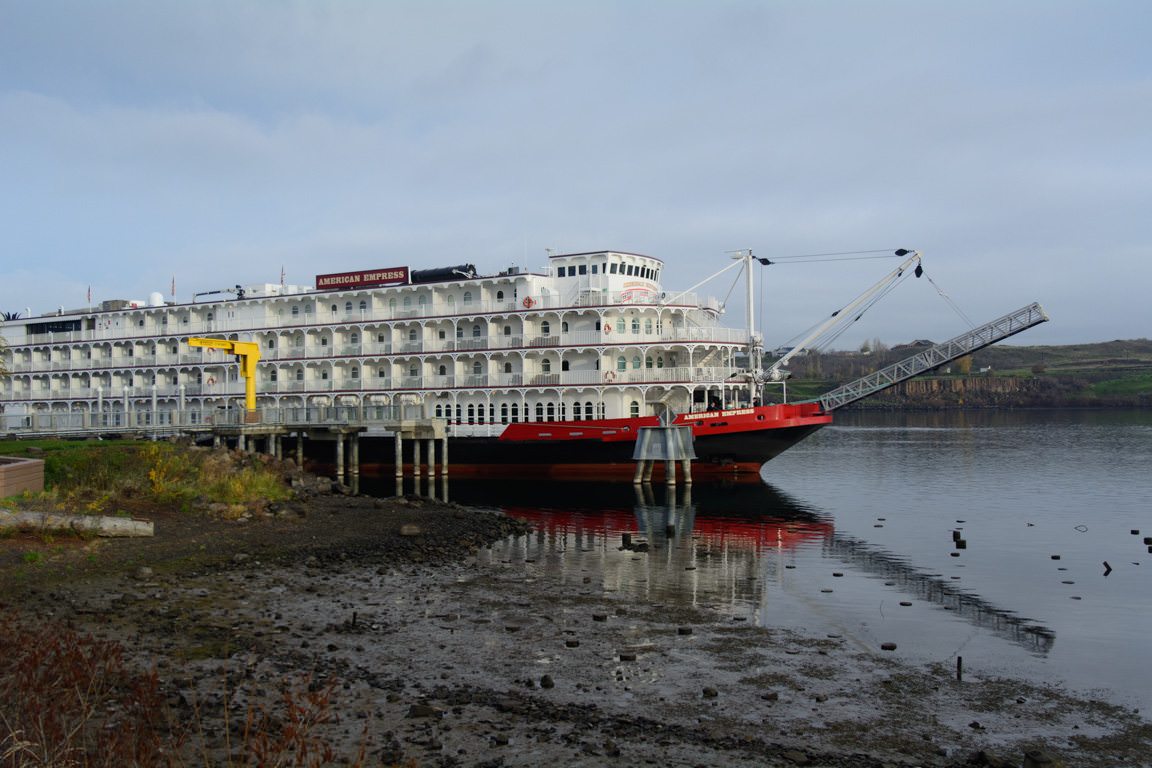 I hopped aboard the replica paddlewheeler’s last trip of the year this past Sunday in Vancouver, Washington for a weeklong wine-themed river cruise through the Pacific Northwest. Sailing roundtrip, mine is one of the few itineraries offered this year that focuses exclusively on wine. To that end, we’ve had special tastings onboard nearly every day in the Show Lounge, highlighting some of the superb wines to come out of this region.

Craft beer mavens aren’t left out, either. I’ve just finished a spectacular local craft brew tasting in the cozy Paddlewheel Lounge, and tomorrow, a complimentary Astoria Ale Trail tour is on offer: a sort of pub crawl through some of Astoria’s best and brightest craft breweries.

The sailing distance on this roundtrip voyage isn’t as extensive as the line’s one-way journeys between Portland (Vancouver, WA) and Clarkston, Washington. Nonetheless, it has been a very special journey, with overnight stays in The Dalles, Oregon; Stevenson, Washington; and Astoria, Oregon. An extended port call is offered in Portland before the ship arrives at her berth in Vancouver, WA for one last time this year.

While I still have three days left on my voyage, I’ve found a lot to like about the American Empress herself, and the American Steamboat Company. You might know the latter best for the river cruise trips the line operates on the Mississippi River aboard the venerable American Queen. What you might not know is that for the past two years between March and November, the line has also offered some pretty spectacular voyages along the Columbia and Snake Rivers that run between Oregon and Washington State.

Five things that I truly love about this ship and the trip:

The American Empress Herself 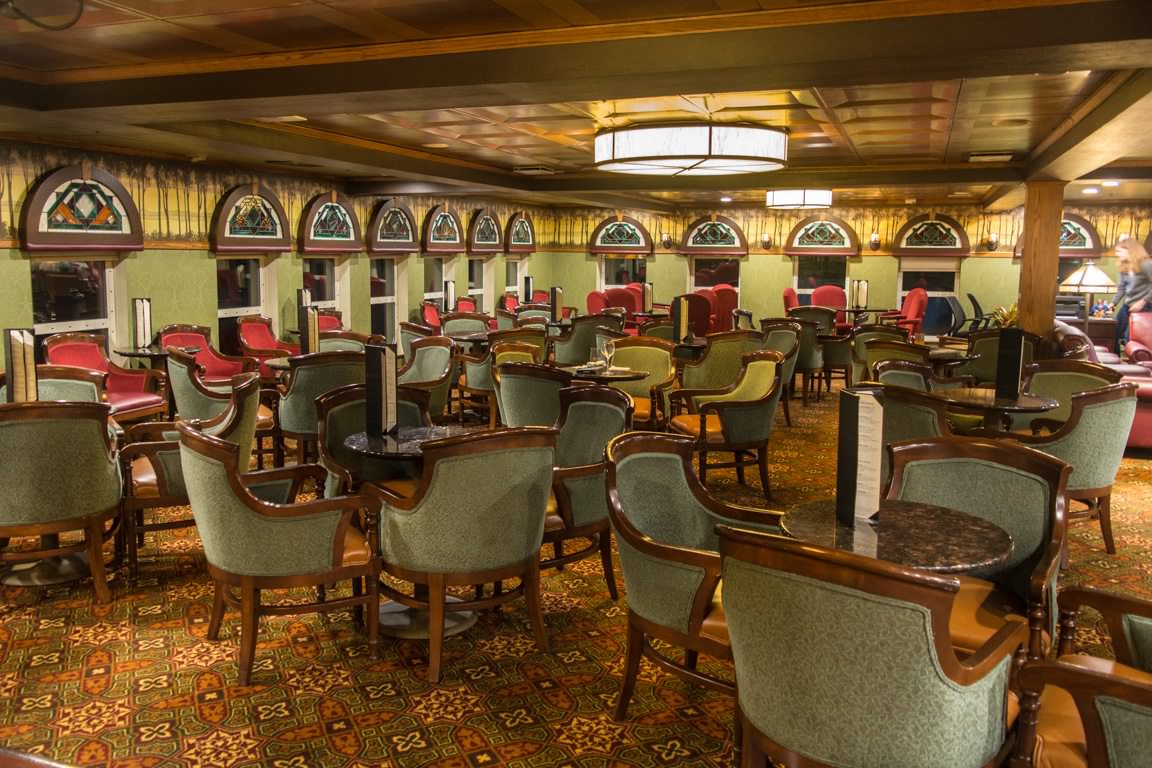 There’s nothing quite like the Paddlewheel Lounge aboard the American Empress. Photo © 2016 Aaron Saunders

Let’s not mince words: this is one beautiful ship, particularly so since AQSC took her over back in 2013 and put her through an extensive refit program. Built in 2003 for the now-defunct Majestic America Line, this 223-guest ship exudes warmth and class at every turn, recreating the grandeur of the golden age of steamships in the Pacific Northwest without skimping on modern amenities. 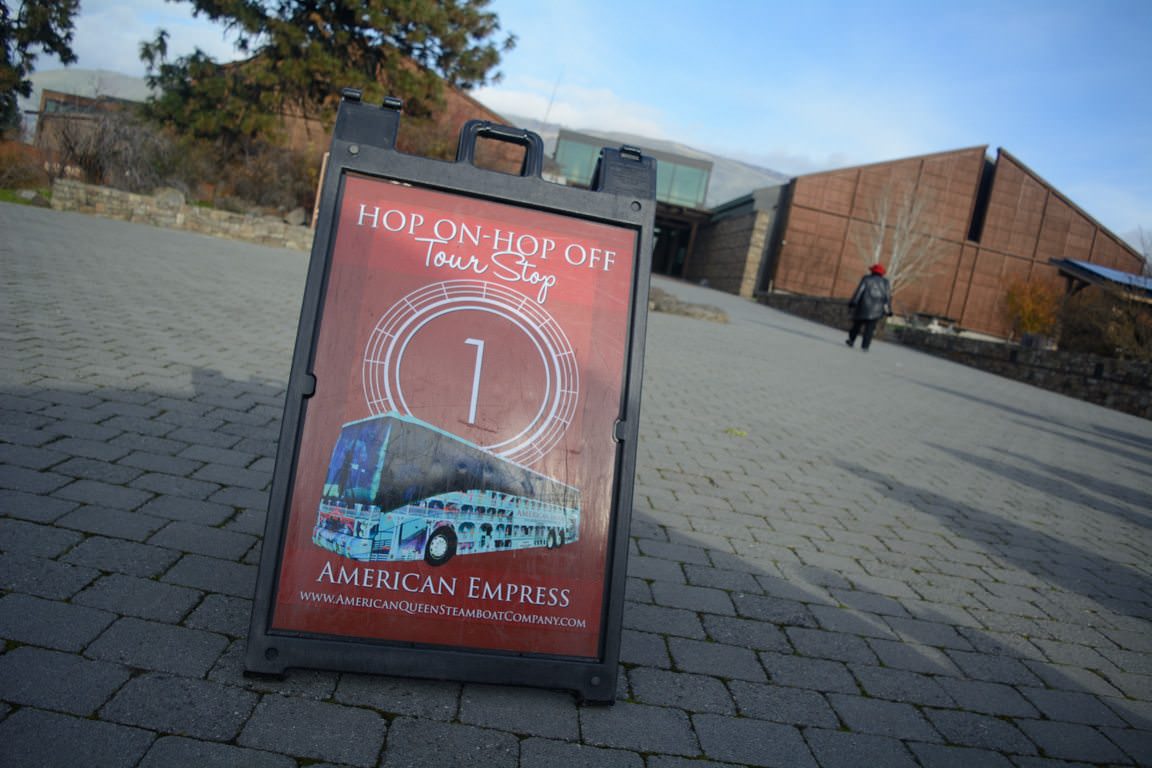 While AQSC offers additional-cost touring options, I’m particularly taken with the line’s comprehensive (and complimentary) Hop-on-Hop-off (HoHo) tours. Offered in practically every port of call, these tours are operated aboard the line’s luxury, American Empress-branded motorcoaches and include between three and seven stops on a continuous loop that runs throughout the morning, afternoon, or entire day. Detailed location maps are provided, and admission to select museums, attractions and venues is also included for all American Empress guests – even if you elect to visit them without taking the HoHo. 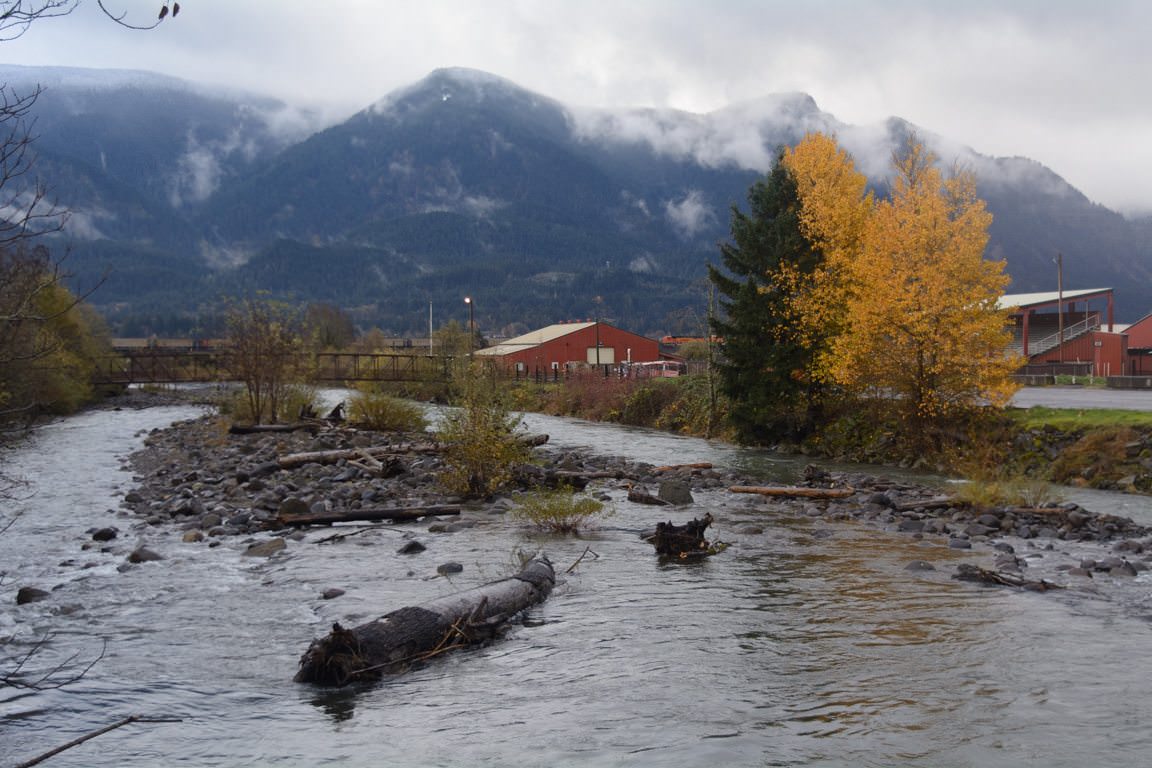 Walking and hiking through Stevenson, Washington yesterday provided me with this great vista. Photo © 2016 Aaron Saunders

Had the weather been better, I would have taken one of the ship’s onboard fleet of bicycles for a fling through the Columbia River Valley. But, despite the rain, I did participate in some of the included hiking tours that have been offered each morning in port. These are fairly gentle hikes lasting only a few miles, but they are accessible to a wide variety of fitness and activity levels and give guests a wonderful overview of the port, led by a member of the ship’s staff. Yesterday, for example, I hiked up to the Columbia Gorge Discovery Center in the afternoon, and had a marvelous time.

A Focus On Everything Local 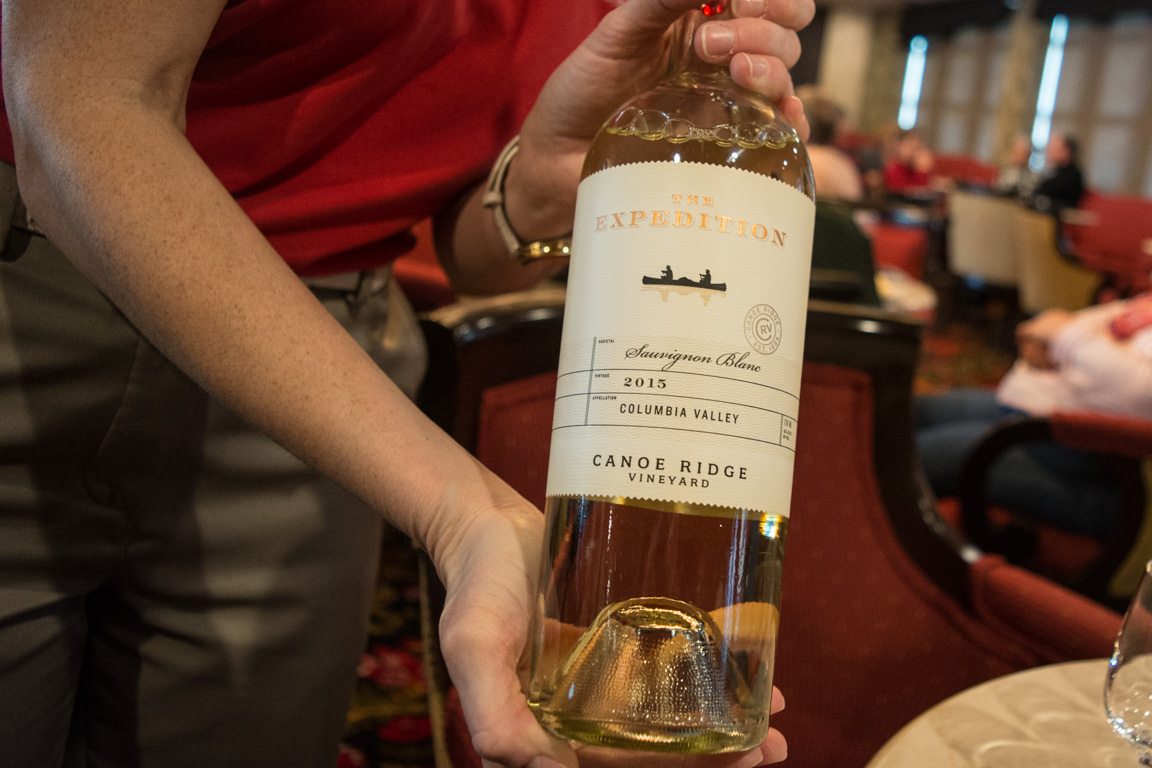 Local wines are served complimentary with dinners onboard, and AQSC’s special wine-themed voyages like this include complimentary tasting events. Photo © 2016 Aaron Saunders

AQSC serves Pacific Northwest-inspired food onboard, along with regional wines and local craft beers, both of which are complimentary during dinner hours and reasonably-priced outside of them.

The line also encourages guests to ‘shop local’, providing lists of noteworthy restaurants, bars, brewpubs, wineries, and stores in the area. This is markedly different from the cringeworthy “approved shopping” maps that big-ship lines like to give out, and it is a refreshing change. AQSC knows that these ports of call are small and may lack the ‘amenities’ that big-city travellers have come to love, and the line takes great strides to encourage guests to branch out and leave any preconceived notions at home.

AQSC may have gotten its start on the Mississippi, but the company is a great steward of the culture and history of the Pacific Northwest. 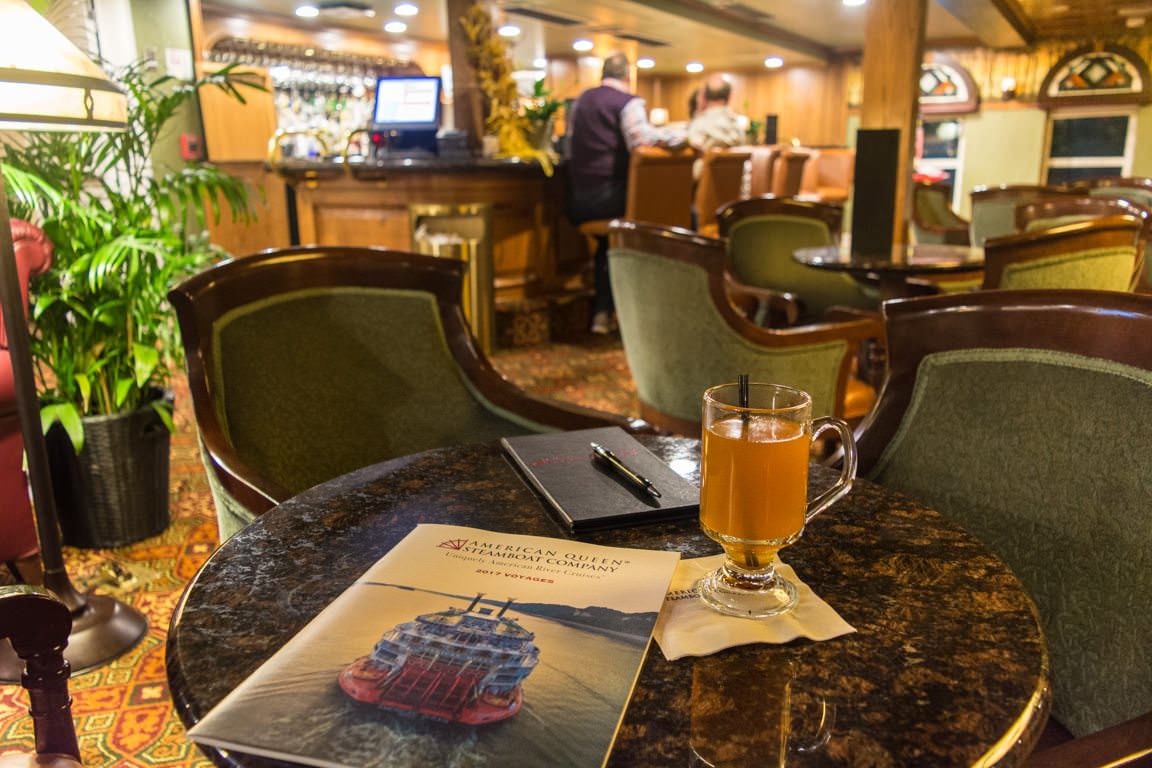 From cocktails with live music to trivia and nightly production shows, there’s always something interesting happening around the American Empress. Photo © 2016 Aaron Saunders

Perhaps the biggest surprise for me here aboard the American Empress is just how much the cruising experience mirrors that of a big ship. On most river cruises, I’m accustomed to evening entertainment consisting of one guy playing the same old tunes on an electric piano in the lounge; here aboard American Empress, we’ve got rollicking piano music and off-the-cuff humour in the Paddlewheel Lounge, accompanied by full-scale production shows and a four-member showband in the main Show Lounge.

Afternoons, even in port, hold plenty of fun diversions, from trivia to movies and craft corners to lectures from American Empress’s onboard “Riverlorian”, who imparts the rich history of the Pacific Northwest on guests in a fun and entertaining way. From the Lewis and Clark Expedition to the history of the Nez Perce natives, the Oregon Trail, and John Jacob Astor’s quest to found the city of Astoria, there’s a lot to love about the rich and young history of this beautiful but unforgiving region of the United States.

Next year, American Empress returns to the Columbia River between March and November. While she’ll operate a full season of voyages, I’d heartily recommend the four wine-themed river cruises that are scheduled for next year, departing roundtrip Portland (Vancouver, WA) on March 5, March 12, and November 12 and November 19, 2017.

Don’t let the rain keep you away; these shoulder-season cruises are jam-packed with fun, not to mention value.