You are here: Home / Cruise Companies / AmaWaterways / AmaSonata / En Route To AmaSonata, By Bicycle With Backroads Along The Danube 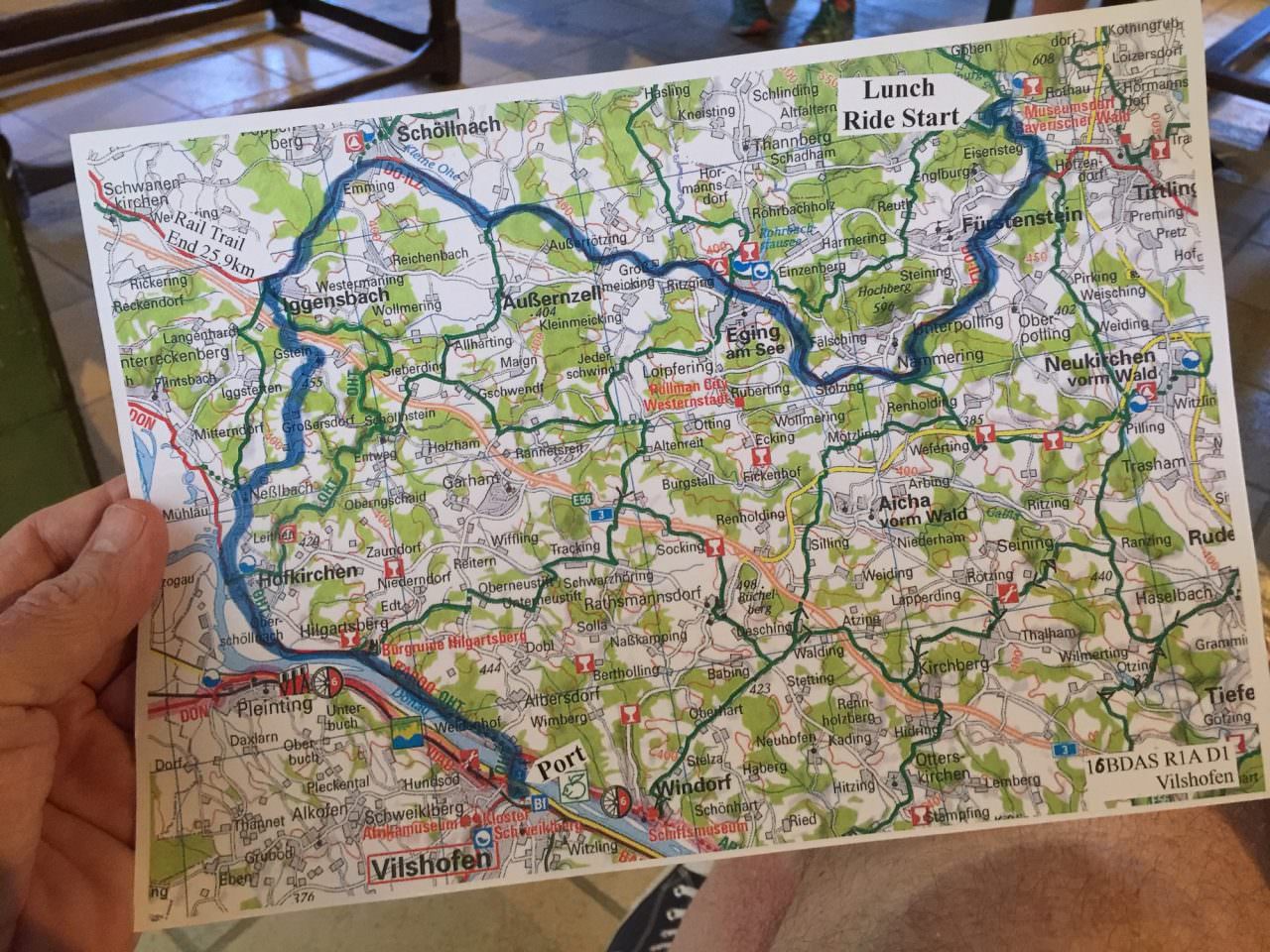 Our route to AmaSonata – by bicycle. © 2016 Ralph Grizzle

After a great day of exploring Prague yesterday, our morning started at 8 o’clock with a 3.5-hour bus transfer from Prague’s Hilton Old Town to Tittling, Germany. Once there, we enjoyed a Bavarian lunch and afterward gathered outside to be fitted for our bicycles, provided by Backroads, the tour company that partnered with AmaWaterways for our bicycling and river cruising adventure.

Our goal for today was to pedal along an old rail bed to reach AmaSonata, docked on the Danube River in Vilshofen, Germany. Our Backroads team leaders gave us a safety briefing and set up our bikes. The process went smoothly. No wonder. When we booked our trip, we had been given the chance to specify the size of our bikes and whether we wanted upright or drop handlebars, flat pedals or we could bring our own. Backroads nailed it to a T, and even for the trees among us (me at 6’5″ and Alex at 6’8″) the bikes were a perfect fit. 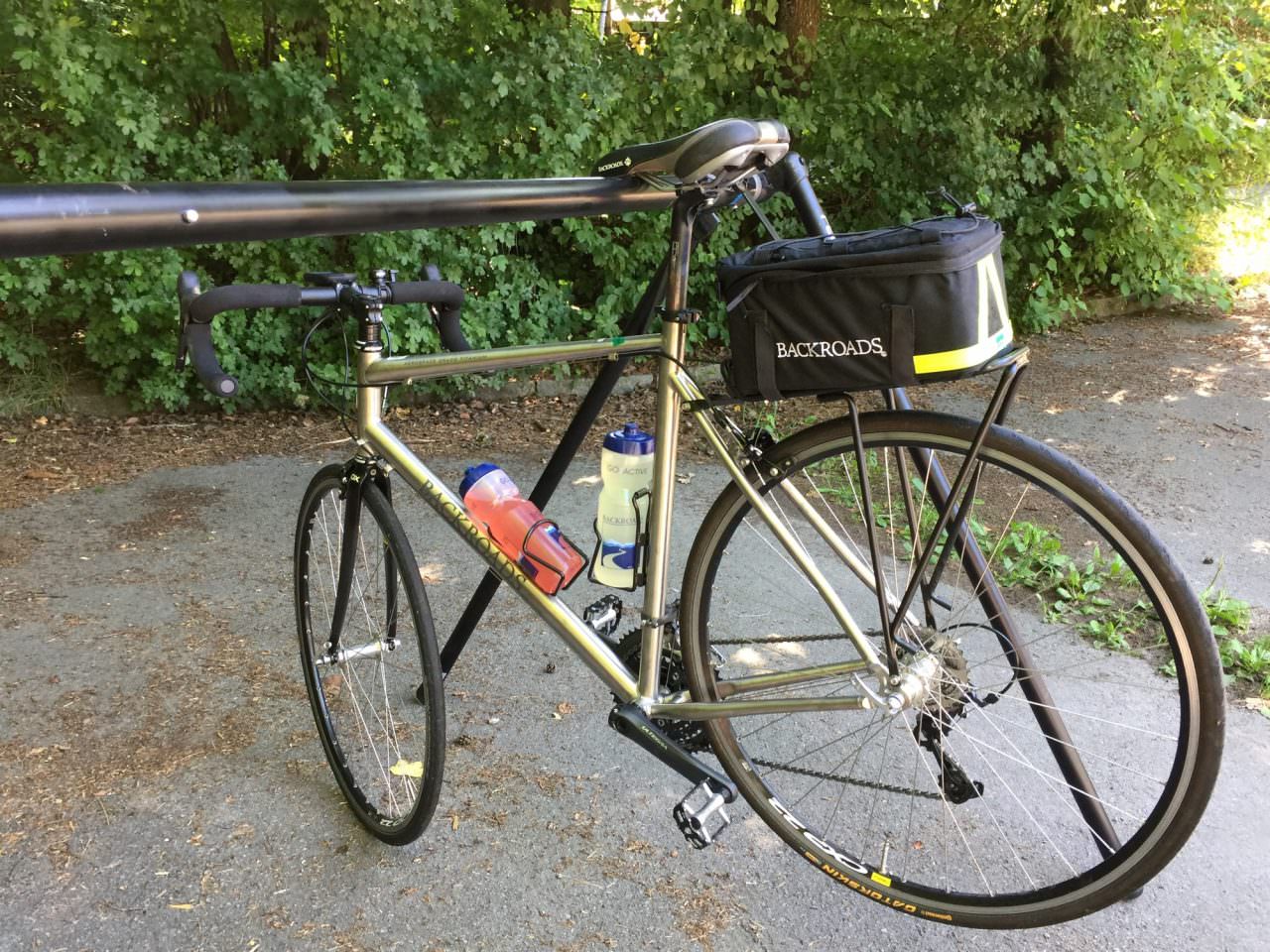 Preparing my bike for the week ahead. © 2016 Ralph Grizzle

On the back rack of the bikes were “trunks” for storing cameras and other gear. Each bike was equipped to hold two water bottles, also provided by Backroads, and all bikes were outfitted with Garmin GPS units, which worked remarkably well, indicating where we should turn, how many kilometers we had done and providing other pertinent data. 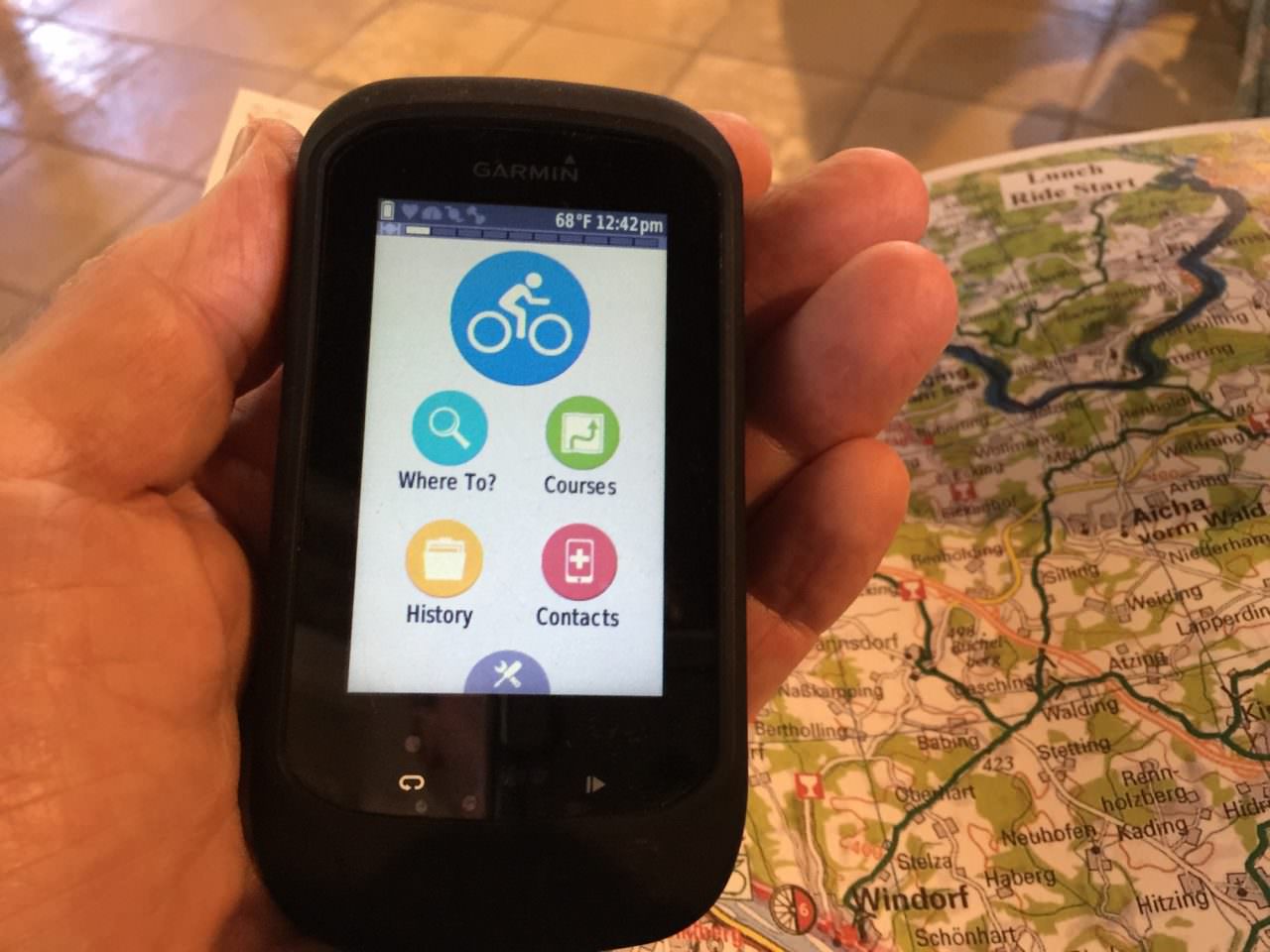 Garmin GPS with our courses for the week preloaded. © 2016 Ralph Grizzle

Because the GPS units were reliable about “90 percent of the time,” said one of the team leaders, we were also given analog instructions on a printed sheet, as well as a paper map. Backroads had taken precautions to make sure there were back-up plans and back-up plans for the back-up plans. The start of the trip felt exceptionally well-organized. We were in good hands. 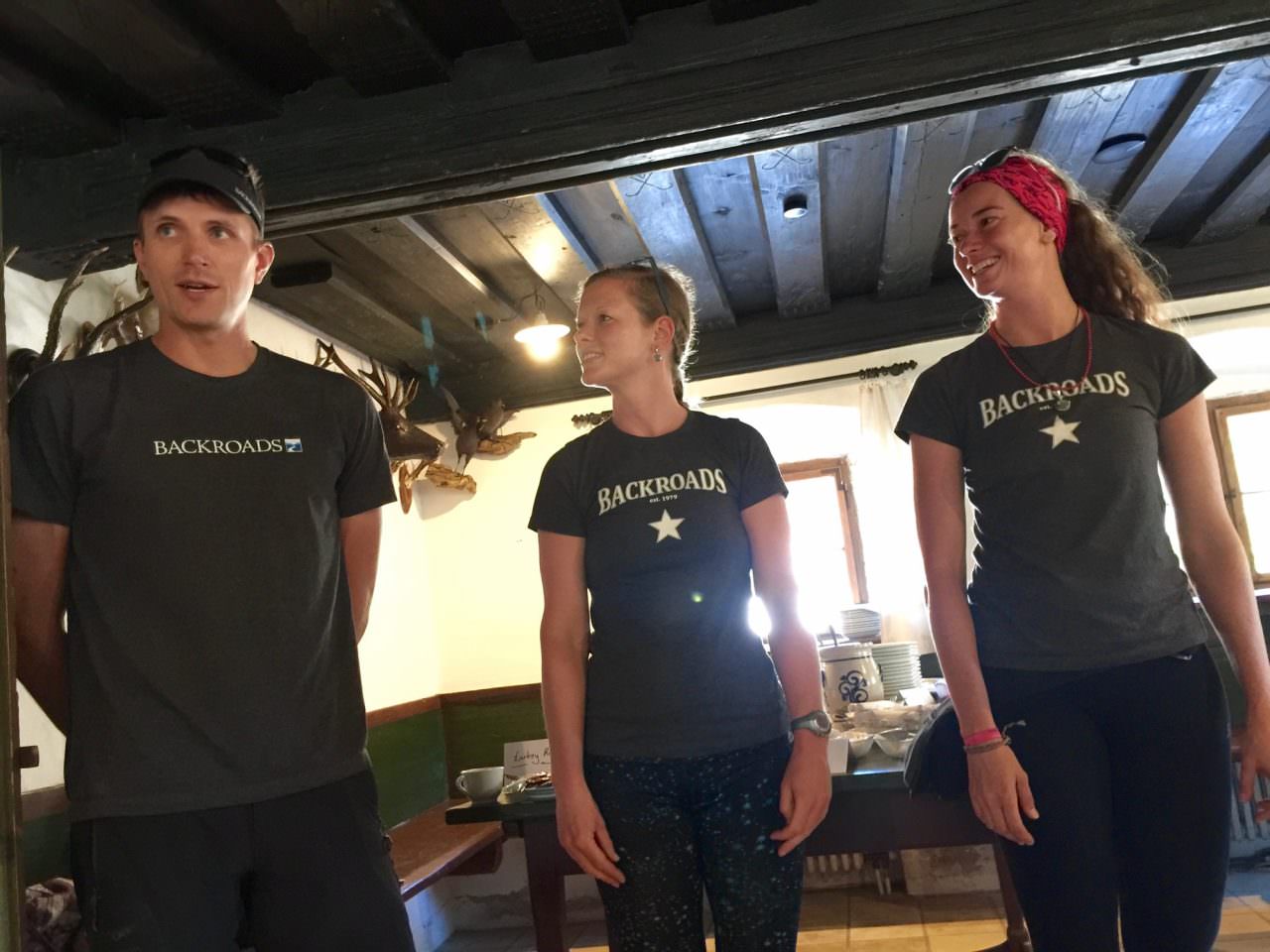 Two support vehicles carried our bags and all sort of goodies, ranging from trail mix to power bars to fruit and hydration mix for our water bottles. Along the way, we’d see the support vehicles twice, parked at convenient points for us to refuel. 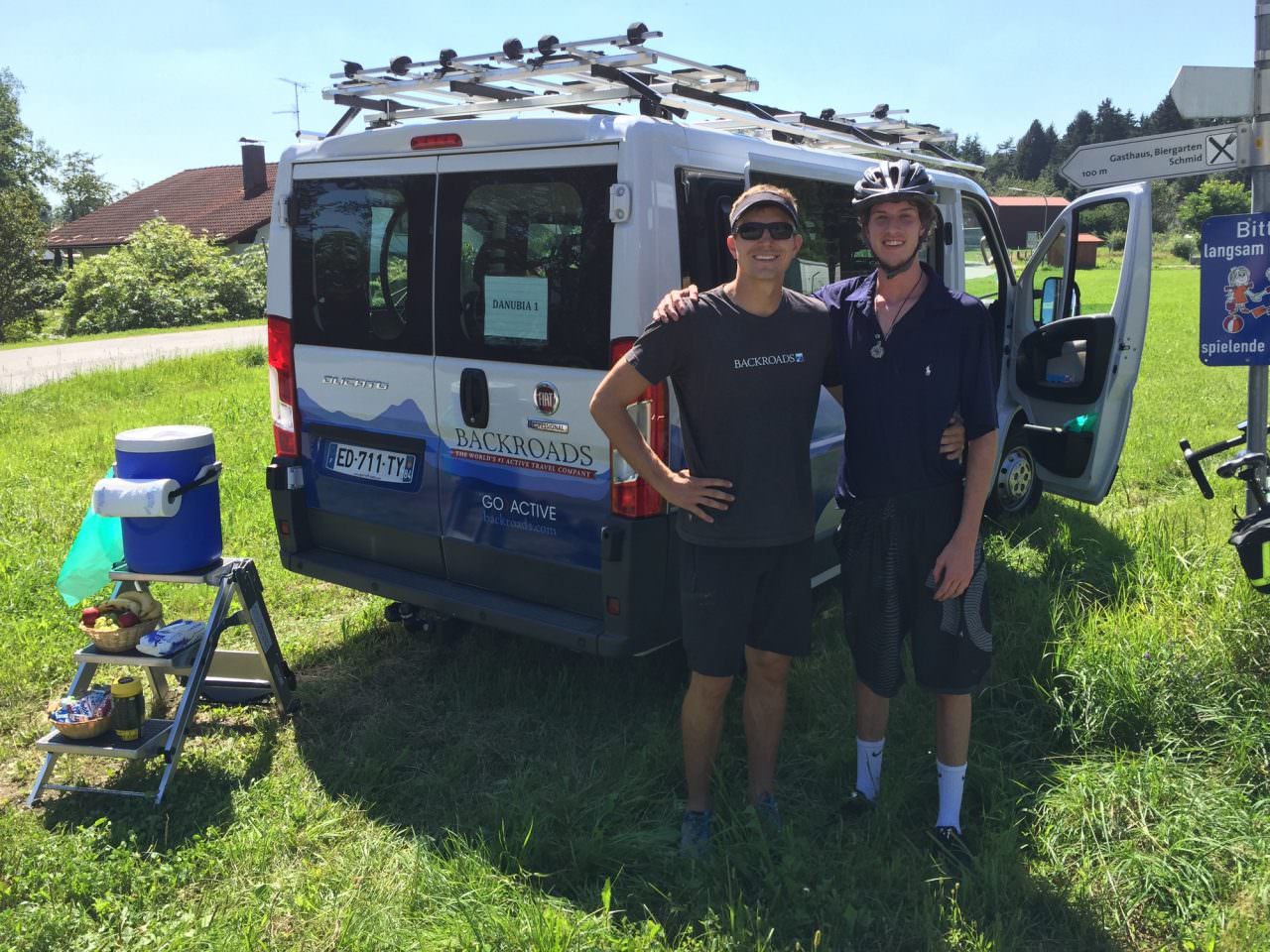 Support vehicles, two of them, for us to refuel along the way. © 2016 Ralph Grizzle

The trip was not only about pedaling but also about seeing the countryside and learning something about the culture and history of the region. One sad reminder of what had happened here: A memorial about an hour into our ride marked the spot where nearly 800 Jews were murdered. The victims’ only crimes were to be on a train that was stalled for a few days on the tracks. The train was taking them to concentration camps.

Locals, we were told, tried to provide the prisoners with food and water, but Nazi guards refused to let the locals contribute, and many prisoners died of dehydration of starvation on the train. Other prisoners were forced to dig graves for those who had died, and those who did not dig to the Nazi’s liking were murdered by the guards. A sad irony is that a week later Allied forces triumphed, ending World War II and liberating prisoners throughout the Third Reich. 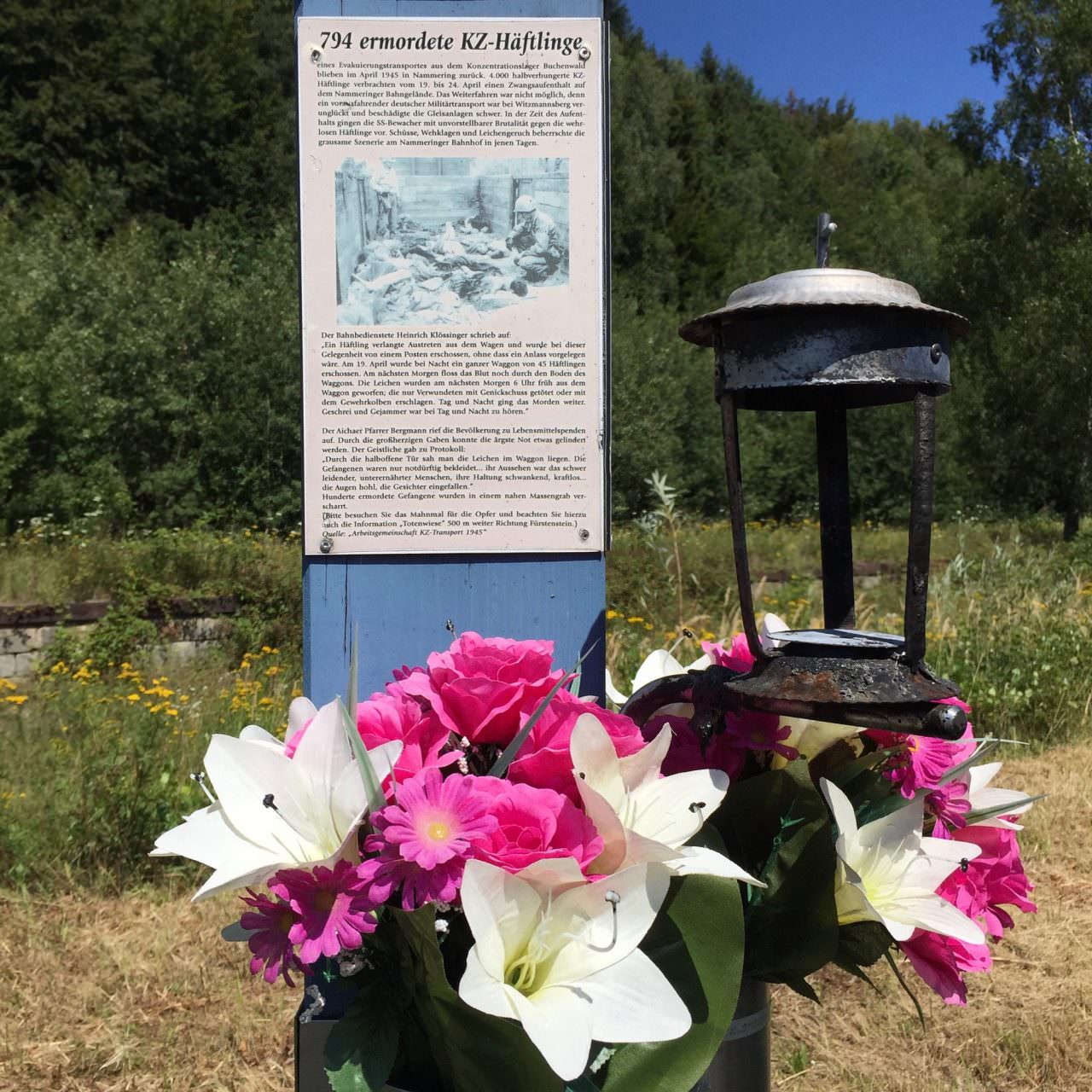 It was with this heavy thought that we left the memorial and pedaled through countryside so gorgeous that we were soon able to think more pleasant thoughts. The pedaling was quite easy for the most part, much of it flat or slightly downhill, except for two long uphill pulls. One lady passed Alex and I on the way up, thanks to her electric-assist bicycle, available from Backroads for a surcharge. 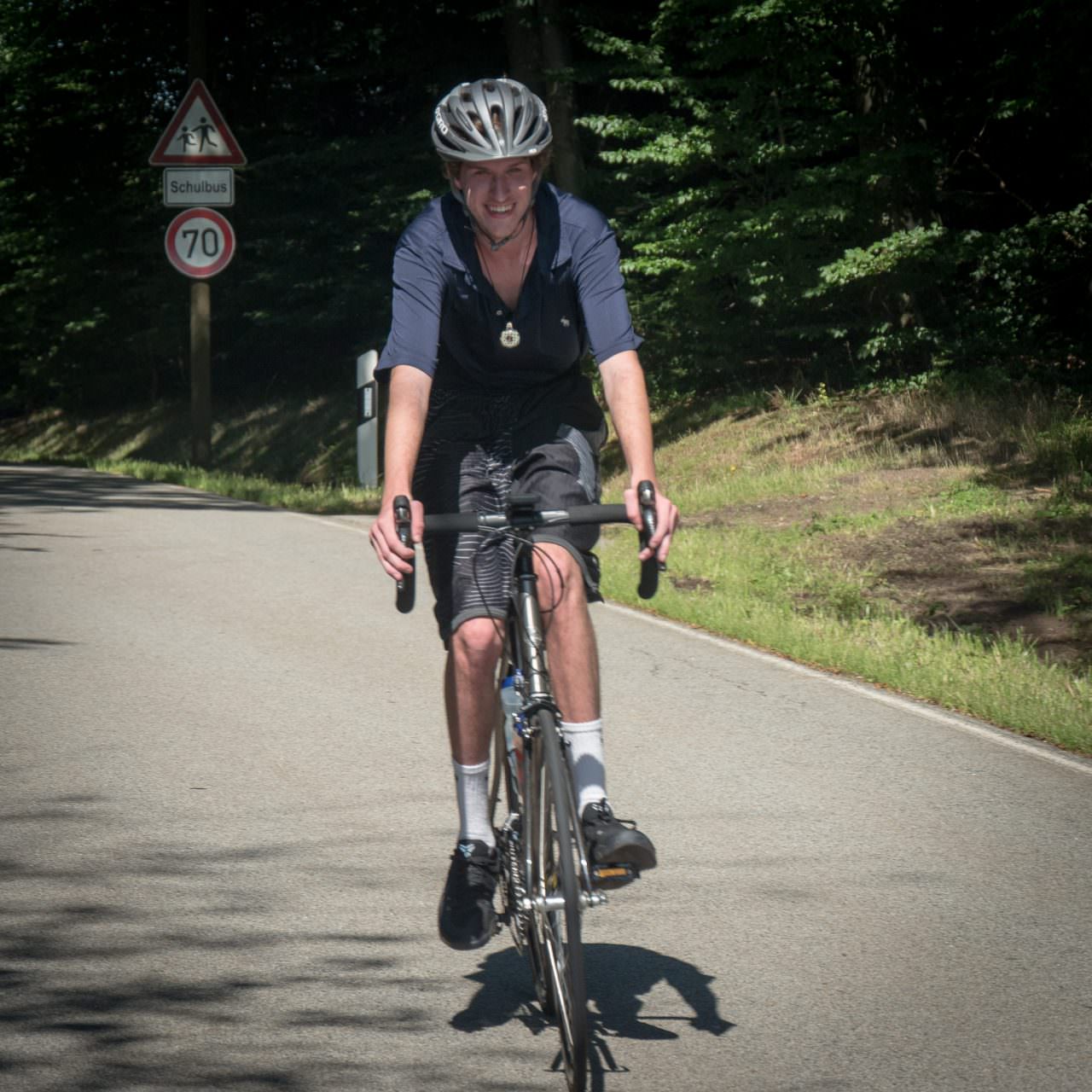 “This could be the best trip we’ve ever done,” Alex said to me as we were pedaling along. We were the only father-son duo in our group of 22, but not the only family. Three kids, the oldest 18, came with their parents from California to pedal the Danube. “We’re not bikers,” the father told me, “except for stationary bikes.” They all were moving along at a good clip, nonetheless. 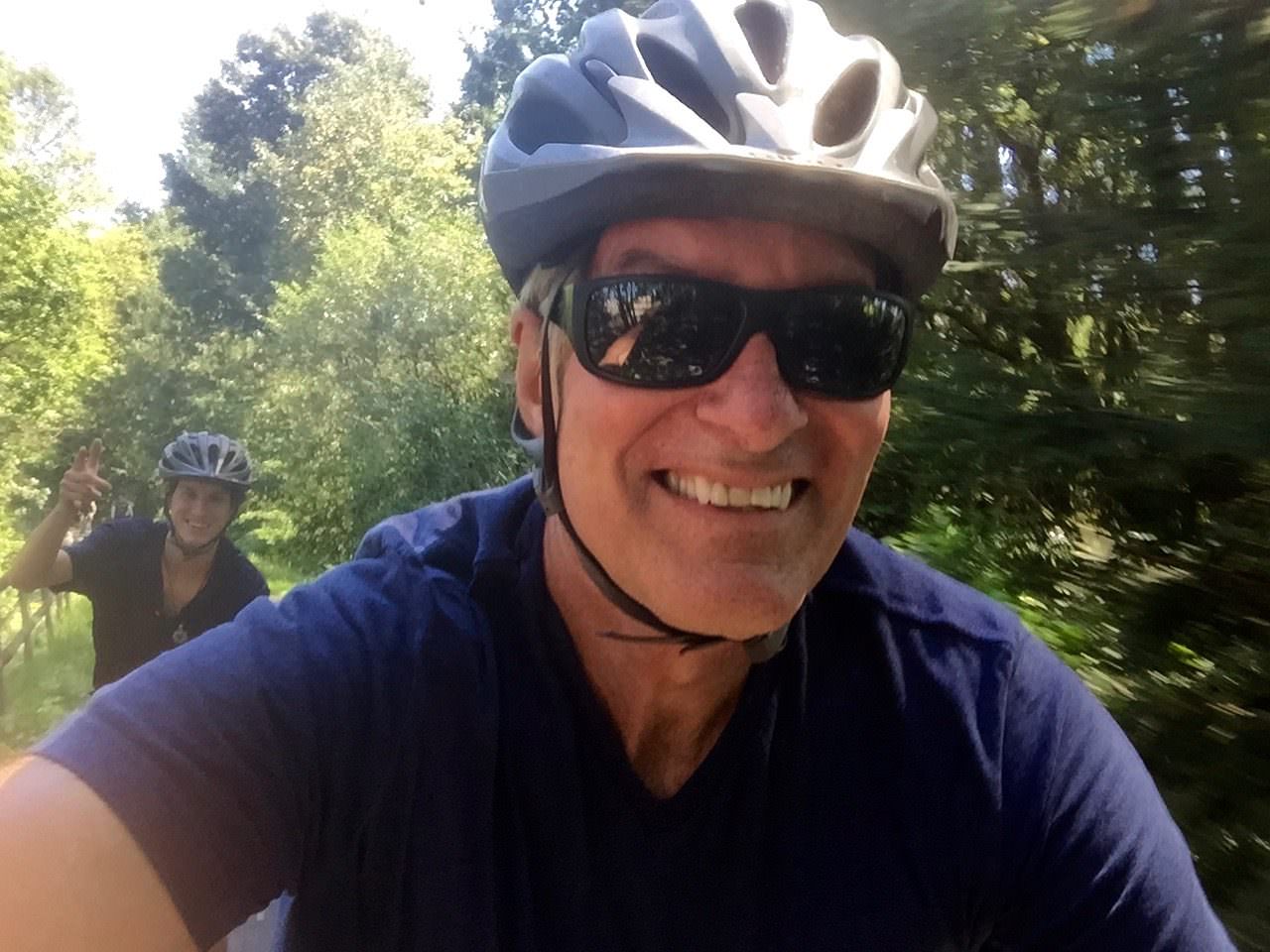 After about two hours we reached Vilshofen, where AmaSonata was docked across the river and waiting for us. For most of the ride we had been on dedicated bike roads. Along stretches where we shared the road with cars and trucks, drivers were exceptionally bike-aware, and at no point did our cycling feel dangerous or risky. 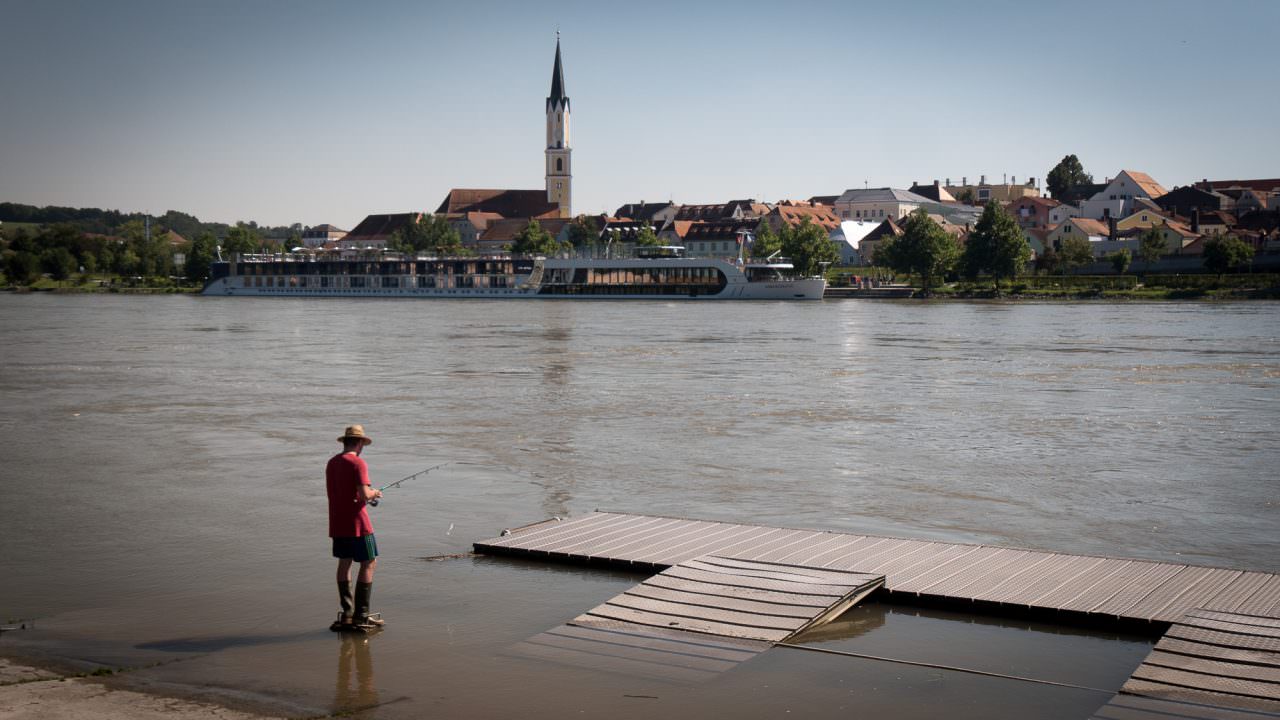 AmaSonata docked across the Danube in Vilshofen. © 2016 Ralph Grizzle

Although we’d covered quite a bit of ground, the ride was not that difficult, and everyone in our group made it to Vilshofen in good shape and in good time. We parked our bikes and gathered our gear to board AmaSonata.

It felt good to step on board. AmaSonata felt like a luxury hotel, and indeed, she was, only a floating one. 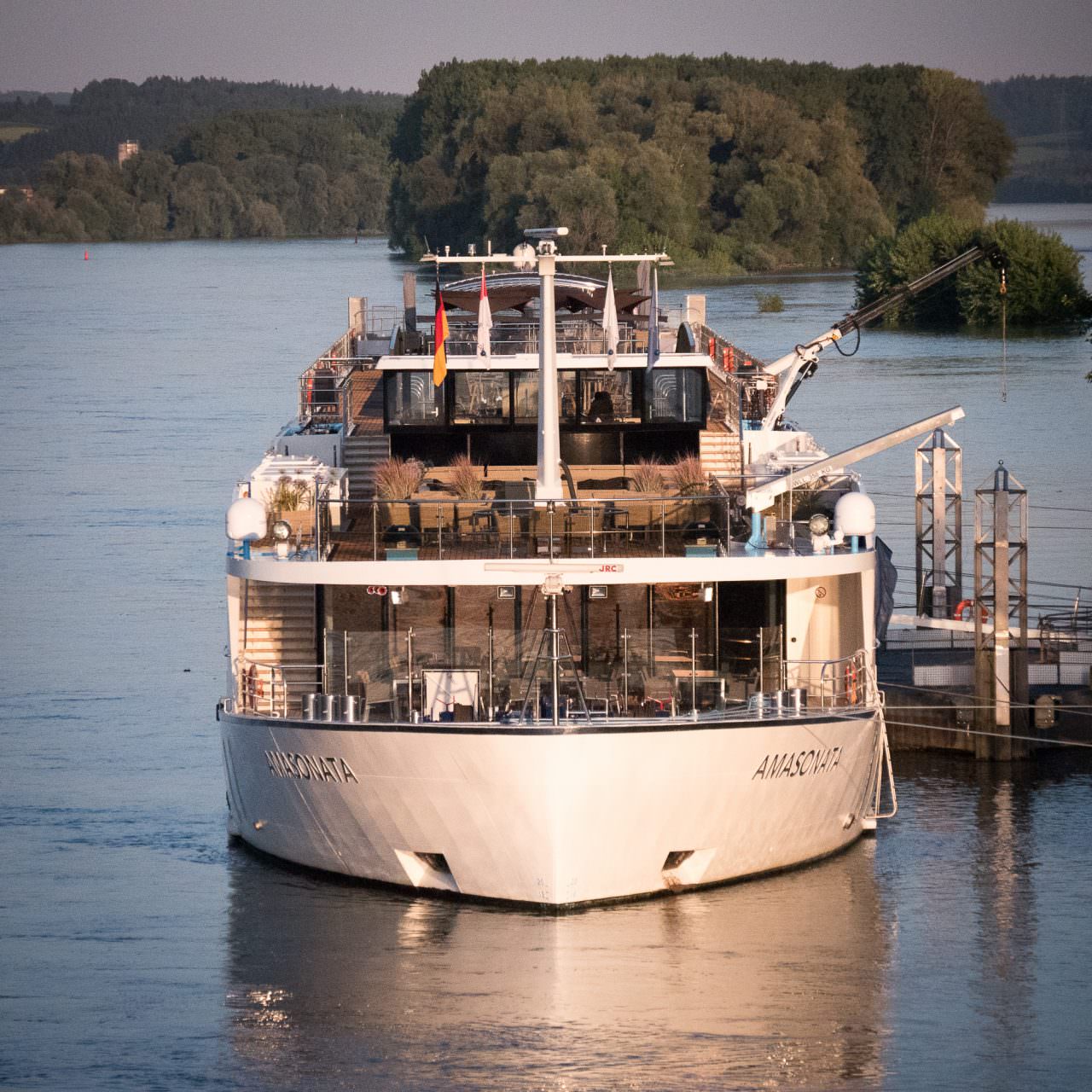 After we had checked in and settled in our rooms, we were invited to an Oktoberfest celebration right at the end of the gangway. AmaWaterways has a special relationship with the city of Vilshofen, which hosts an Oktoberfest for embarking AmaWaterways’ guests. We enjoyed oompah music, Schuhplattler dancing, German beer and pretzels — all at no cost to us. 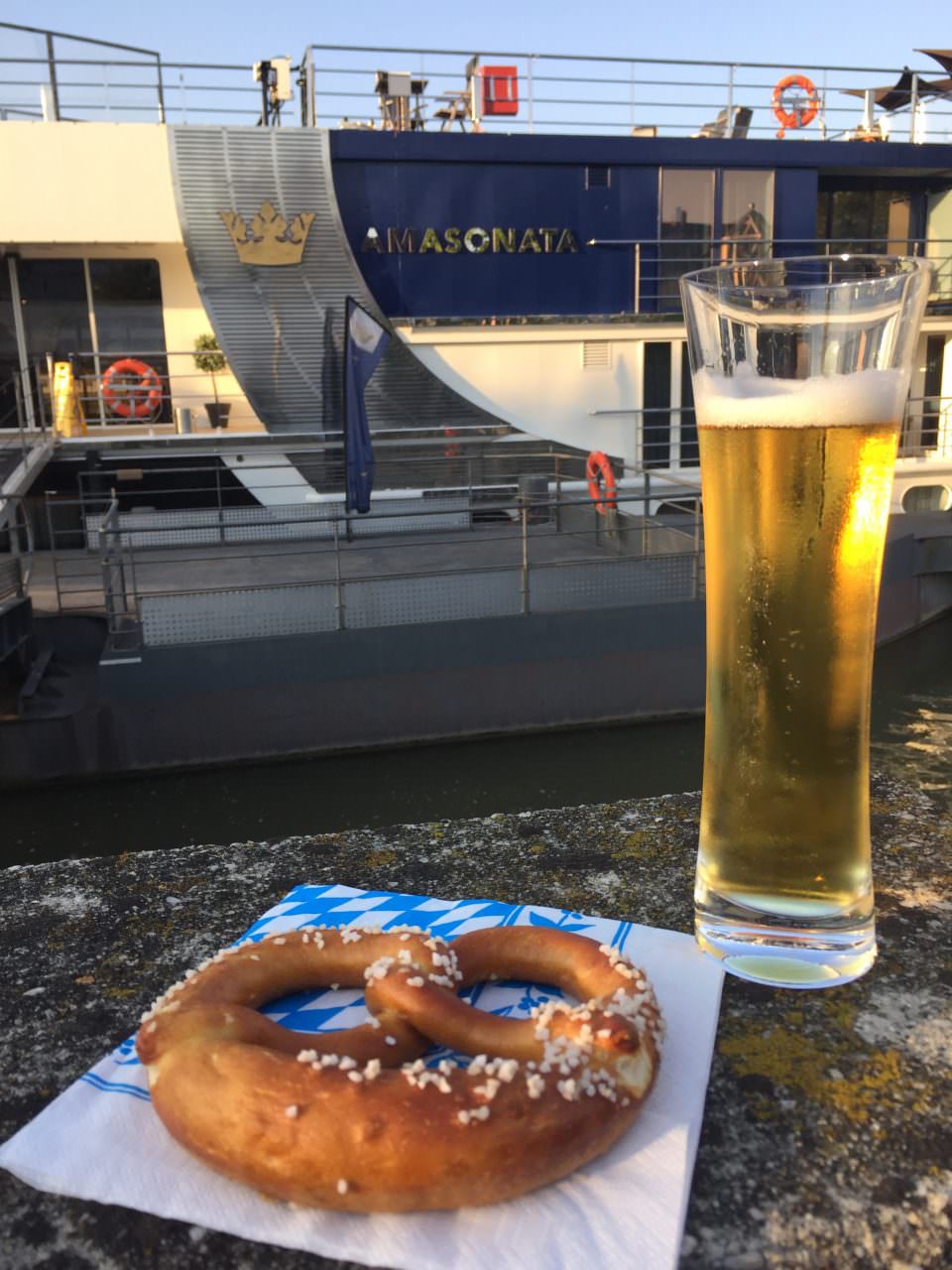 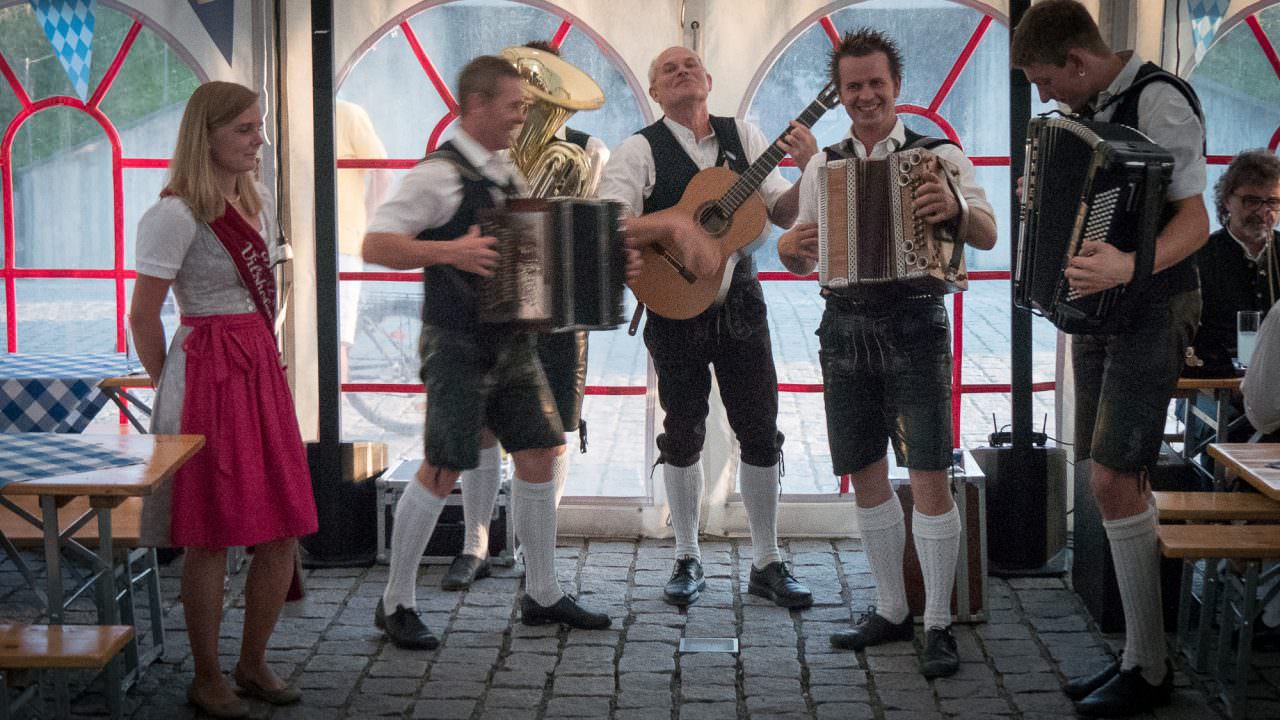 During the course of the week, AmaSonata will take us from Vilshofen to some of the most beautiful cities along the Danube. We’ll pedal as much as possible, short rides and long ones, hopefully all under sunny skies and with the wind at our backs. We look forward to the adventure and to the miles that we will cover on the bikes — and to our time on one of the finest ships on the Danube, the beautiful AmaSonata. 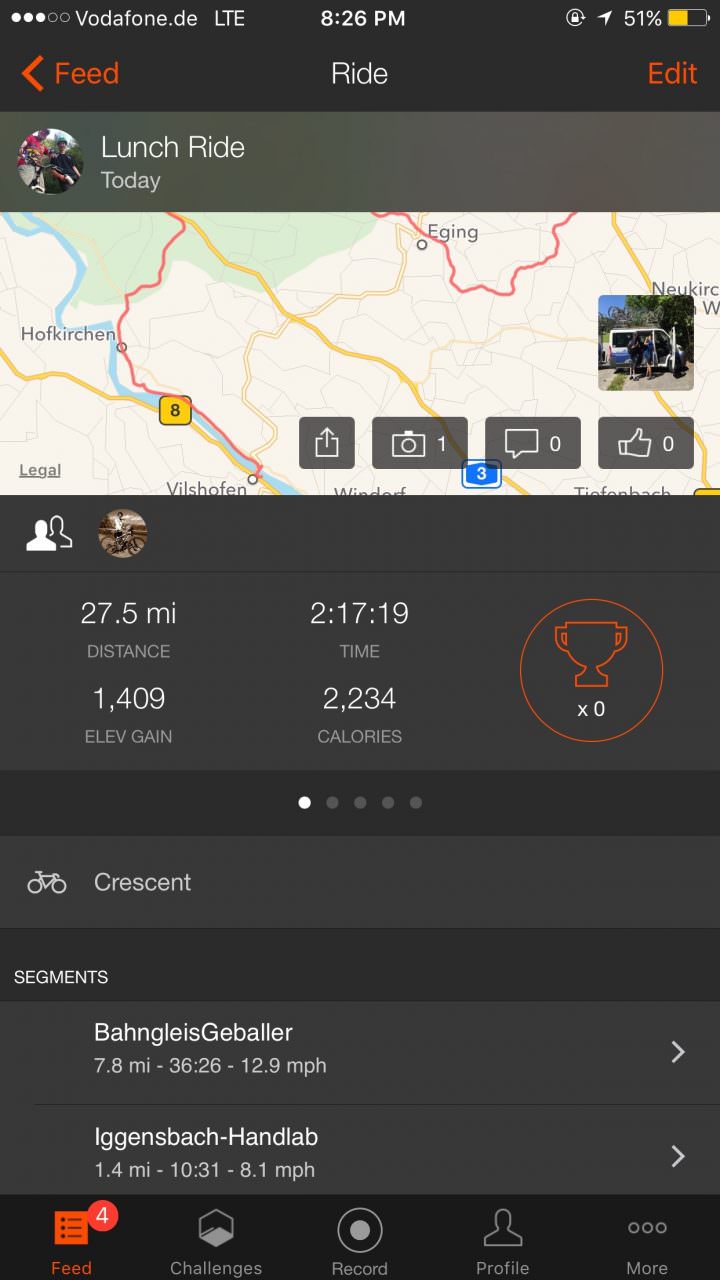 What a great way to arrive at AmaSonata, docked in Vilshofen, Germany. Our group cycled from Tittling, Germany, 27.5 miles, with an elevation gain of 1,409 feet, and calorie burn (for me at least) equalling 2,234. Moving time totaled 2:17.