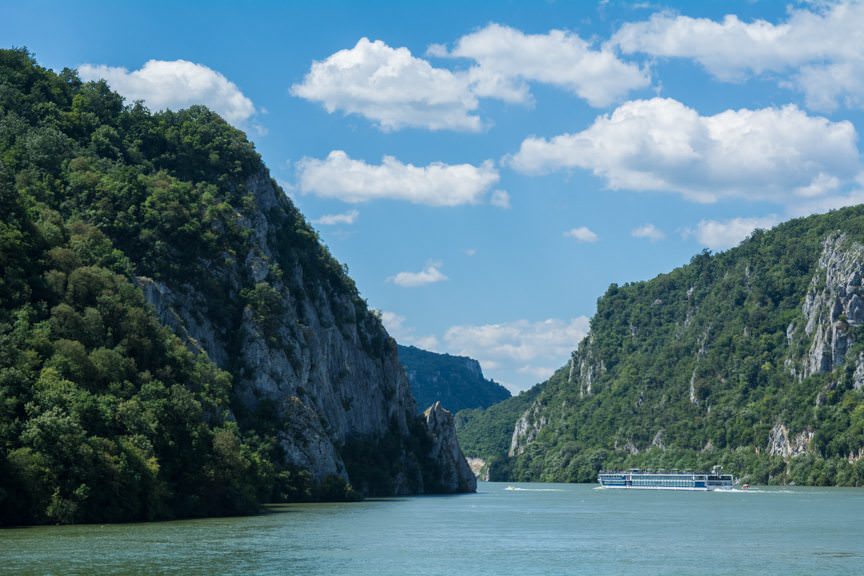 A field of high-voltage power cables are crackling above my head. It sounds like a cross between a bad Frankenstein movie (“It’s Alive!”) and a bowl of Rice Crispies. Snap, crackle, pop. It’s extremely audible, and almost disconcerting. I’m hesitant to turn on my camera for fear of zapping myself, but eventually I relent and power it up anyway: I want to see us enter the largest locks the Danube has to offer.

Viking River Cruises’ Viking Embla pulled in to this field of electrically-charged wonder around breakfast time. The cables are part of the massive Djerdap Power Station – a quadruple-lock hydroelectric dam structure that serves as the gateway to the Danube’s famous Iron Gates that is the subject of our day of scenic cruising, done in Viking’s own inimitable style. 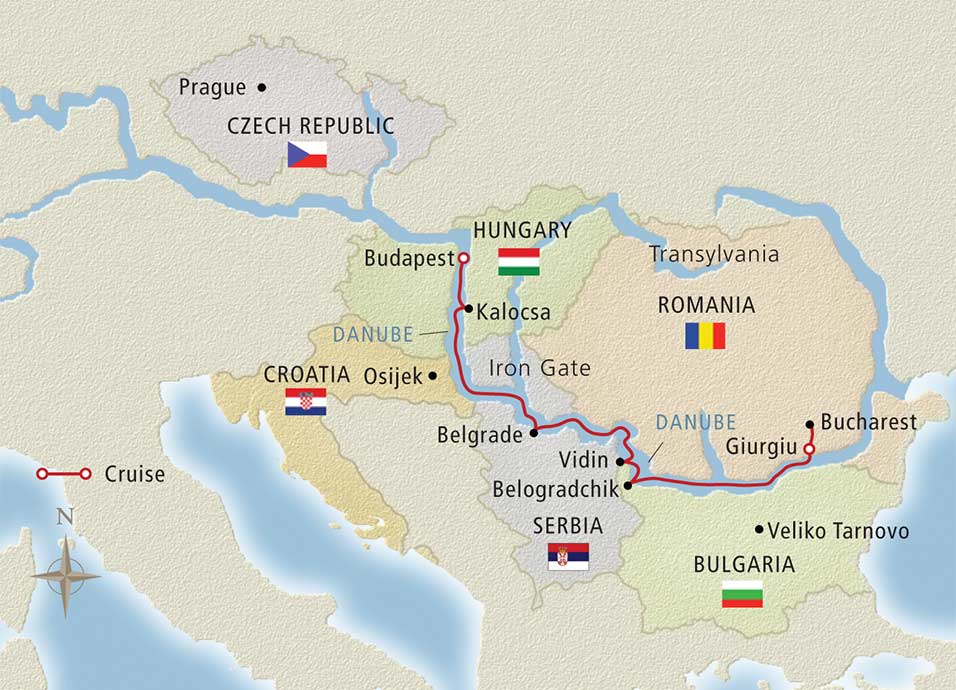 That buzzing noise I heard from the high-voltage power cables as Viking Embla sailed under them and into the lock? That’s called corona discharge, and it generally occurs when temperatures are high and moisture is burning off the transmission lines. That makes sense: at 8:00 a.m., the mercury had already climbed ten degrees to 25°C.

Along the banks of the Danube are signs with numbers painted on them. These are kilometre markers. The Danube technically starts at Kilometre 0, near Sulina, Romania’s easternmost city. Moving west, the Danube continues on until Kilometre 2415: Kelheim, Germany, which is just northwest of the town of Regensburg. From there, river cruise ships enter the Main-Danube Canal to continue their journey to Nuremberg and points further afar. 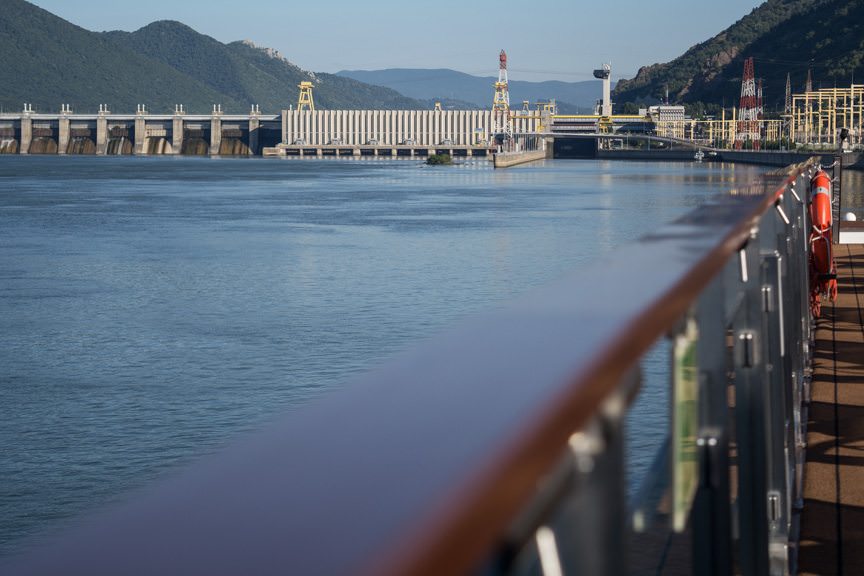 The Djerdap Power Station and locks come into view shortly after 7:00 this morning aboard Viking Embla. Photo © 2016 Aaron Saunders 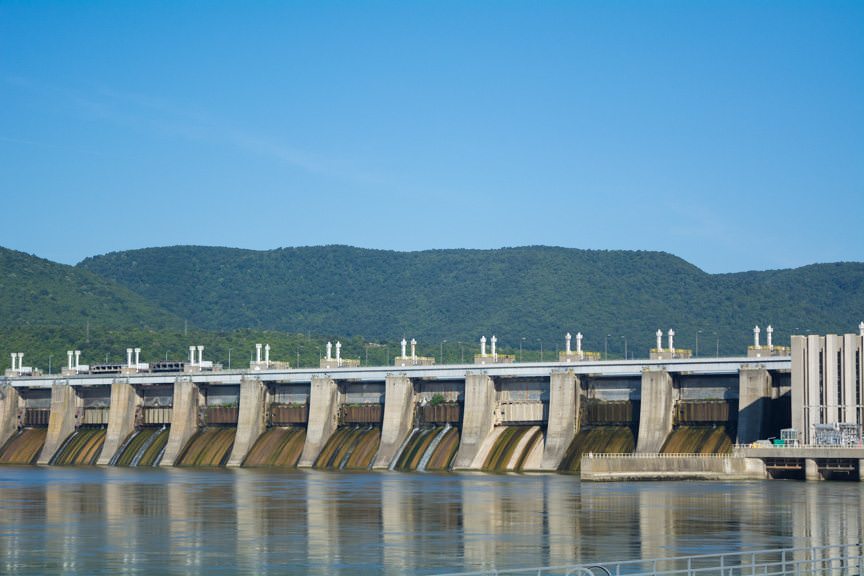 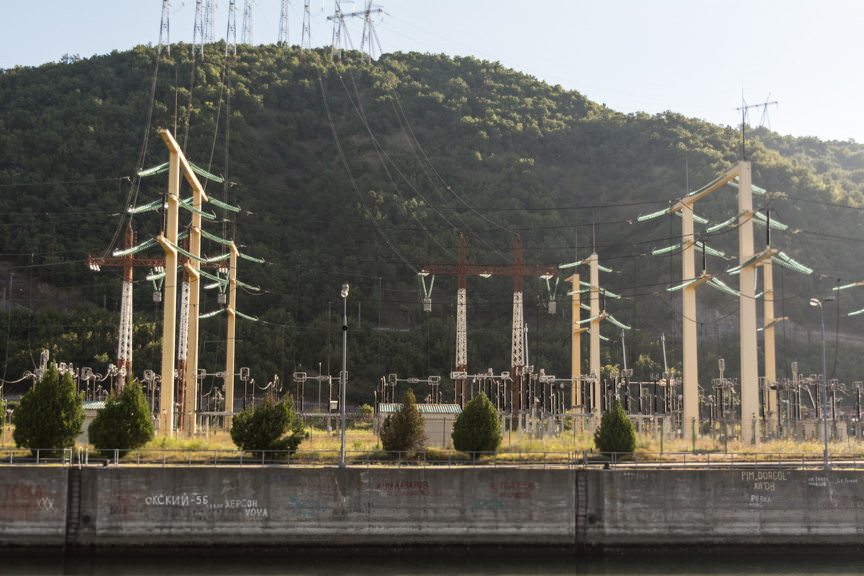 At Kilometre 942.90 is the Iron Gate 1 Lock. Comprised of four lock chambers (two on the Romanian side, two on the Serbian side) and a hydroelectric power plant known as the Djerdap Power Station, this massive lock complex is the largest on the Danube.

Before the lock was completed in 1971, this was one of the most dangerous, difficult-to-navigate stretches of the Danube. Ships had to be tied together and led through a series of four narrow gorges by one, sometimes two, powerful tug boats. The Djerdap Power Station and its related four lock chambers (known as Djerdap I and 11 on the Serbian side, and Portile de Fier I and II on the Romanian side) solved this problem. 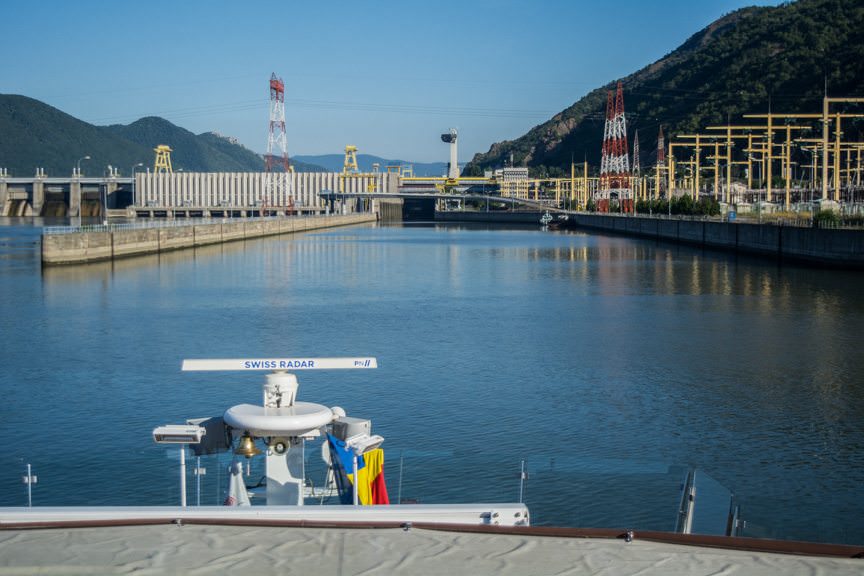 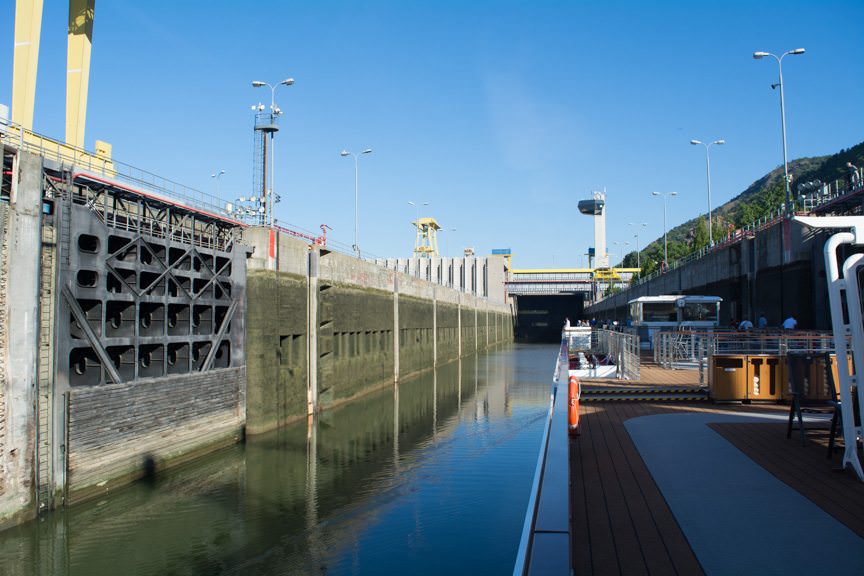 However, in order to begin construction for the complex back in 1960, 23,000 Yugoslavs and Romanians had to be relocated: the backup created by the Dam would eventually raise the height of the Danube by 130 feet, flooding villages and towns along its banks that had been inhabited for centuries.

However, it is only because of this dam – and the Main-Danube Canal in Germany that linked the Main and Danube rivers together in 1992 – that cruises like our Viking journey are even possible. When I disembark in Budapest on Thursday to begin my two-night included post-cruise stay, a very decent number of guests will be staying onboard and sailing with Viking Embla as she makes her way up to Amsterdam, Netherlands; a journey of 23 days in total. 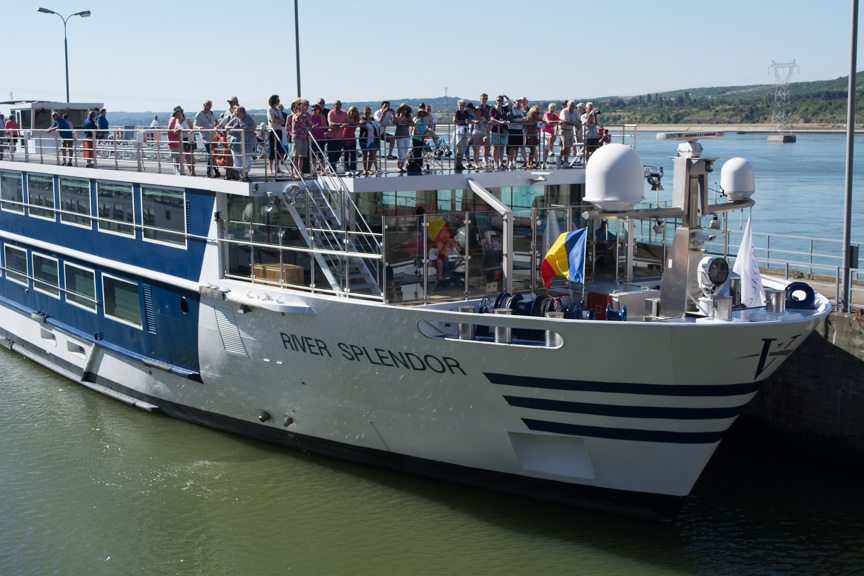 Another ship – Vantage’s River Splendor – joined us in the lock for our 90-minute ascent to the top. Photo © 2016 Aaron Saunders

Advances like the Main-Danube Canal and the Djerdap Power Station and Locks have also improved trade. A vast amount of cargo is shipped via the Danube, which functions as a major shipping route throughout Continental Europe. Contrary to popular (and mistaken) belief, the Danube is not overrun with river cruise ships, regardless of how many new ships Viking has launched. Far, far more cargo ships are in operation on the rivers of Europe. These technological innovations link Europe together from the North Sea in the Netherlands to the Black Sea near Romania. 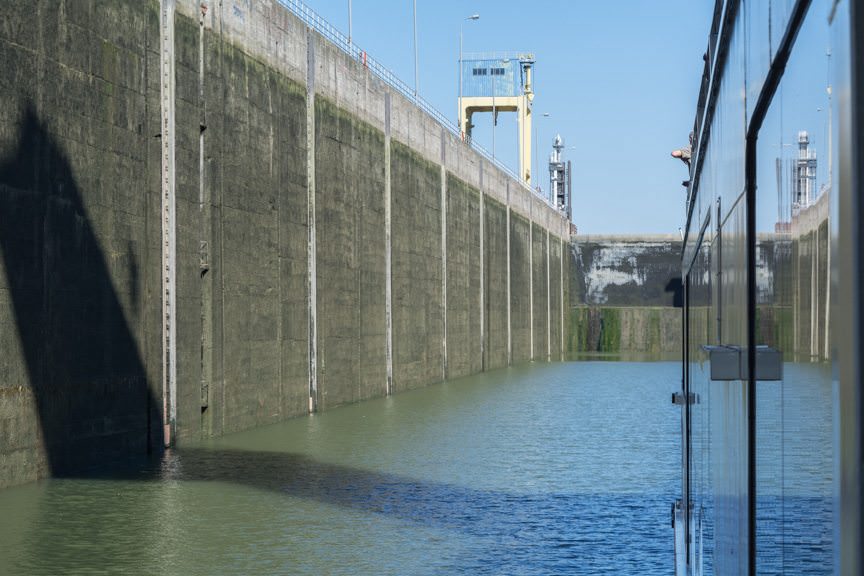 More useless trivia for you to bore friends with at your next dinner party: there are a total of 18 hydroelectric power plants on the Danube. If you’ve been following along, where there are power plants, there are locks. A total of 14 of these 18 locks are “double chamber locks”, meaning that locks can accommodate ships travelling upstream and downstream at the same time. The four single-chamber locks can only accommodate ships travelling in one direction at a time – and that leads to long wait times. So, if you’re queued up outside a lock on your next river cruise and you’re not sure why, you’re probably at a single-chambered lock.

Soon after transiting the lock, we were at the narrowest stretch of the so-called Iron Gate. Here, the land – which is now comprised of rocky cliff faces towering high above the waterline – is just a few hundred metres across. You couldn’t spin the 134-metre Viking Embla around in the middle of it; it’s that narrow. 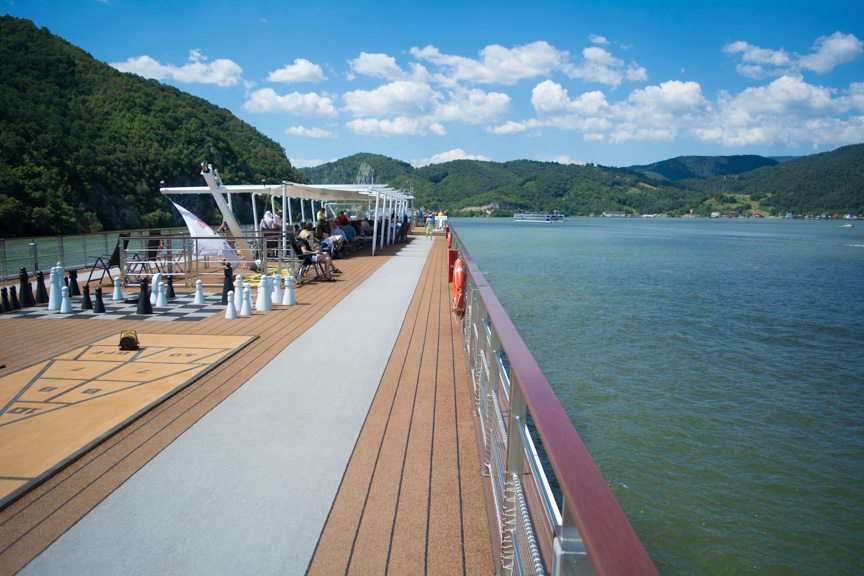 Also in this stretch of water – curiously – is Europe’s largest sculpture: the rock sculpture of the Decebalus, honouring Decebalus, the last King of the Dacia who fought against the Romans in ancient times to preserve what is today Romania. If you think it’s a centuries-old carving, think again: the sculpture took 10 years to create, and was completed in 2004. 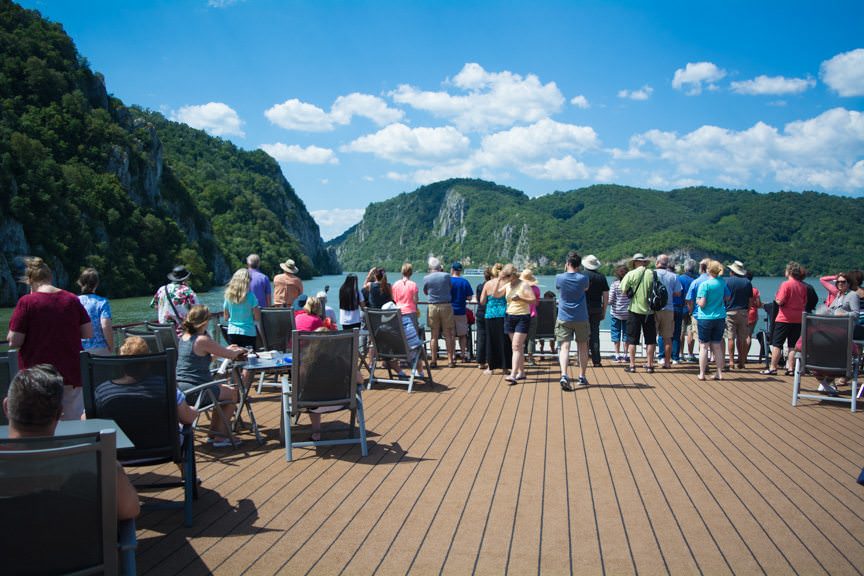 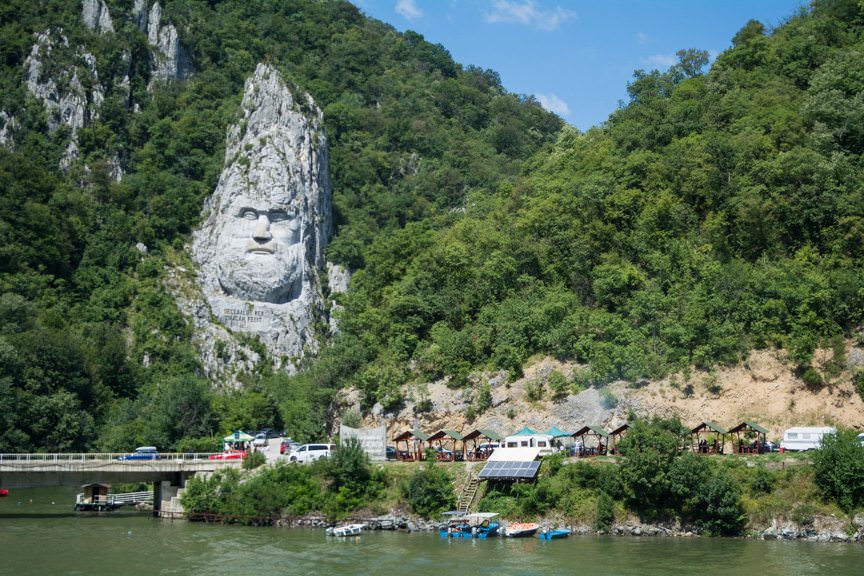 …and passes the Rock Sculpture of the Decebalus. Completed in 2004, it is the largest such sculpture in Europe. Photo © 2016 Aaron Saunders

It’s worth noting that we entered this most photographed stretch of the Iron Gates behind another river cruise ship. That ship, from a competing line, sped through in order to make a scheduled afternoon port of call. Here on Viking Embla, we have all day. Our Captain slowed us down and crawled through this picturesque area, allowing guests to properly take in the superb sights. It’s that kind of little touch that I expect from Viking, and the line never fails to disappoint.

The rest of the day proceeded in a similar fashion: guests gathering in the Viking Lounge and up on the Sun Deck, taking in the sights, enjoying a cocktail or two, and generally relaxing. In the afternoon, a cooking demonstration was held in the lounge, with guests learning how to make traditional Slavic Poppyseed Cake. This was followed by a (very well-attended) presentation on Viking’s future river and ocean cruises. 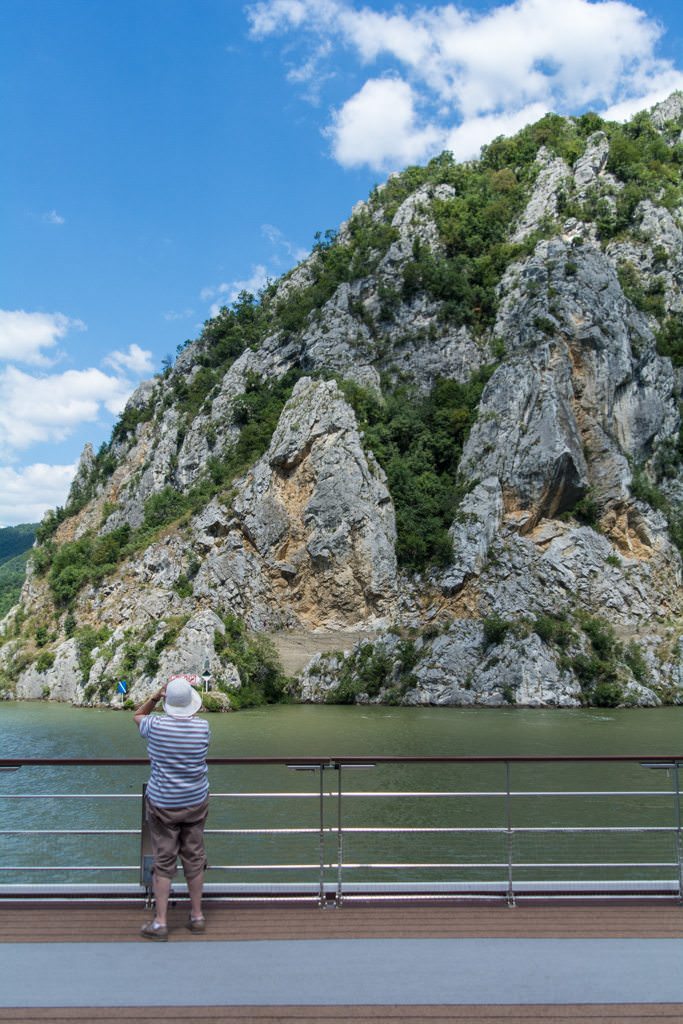 The landscape here has changed from flat to towering and imposing. Photo © 2016 Aaron Saunders

This cruise, for example, is also available as a longer 23 Day European Sojourn that operates between Bucharest and Amsterdam. Operating between March and October, it visits eight different countries, nine UNESCO World Heritage sites, and offers a total of 18 complimentary guided tours. Additional optional tours are available in most ports for an extra cost. 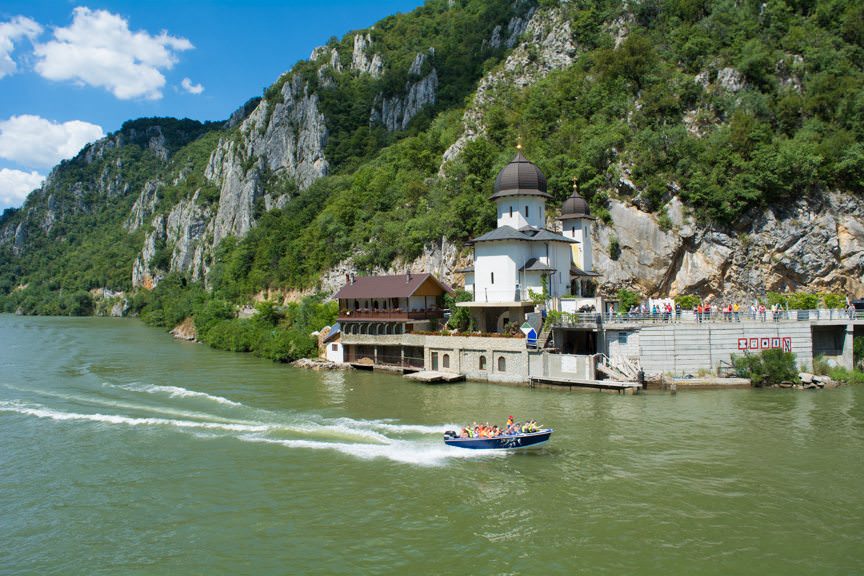 If you’ve never river cruised before and can’t swing 23 days away, the one Viking cruise on the Danube I always recommend is the weeklong Danube Waltz. Operating between Budapest and Passau, Germany, it’s the quintessential Danube river cruise experience, and Viking does an amazing job of it. Along the way, you get to visit a great mix of European cities and towns, including Bratislava, Slovakia; Vienna, Austria; Durnstein, Austria; Melk, Austria; and Linz, Austria – gateway to Salzburg, the famed setting for the movie, The Sound of Music.

On this Passage to Eastern Europe cruise, a number of guests took a pre-cruise package that I’m honestly a little envious of. The three-night Bucharest & Transylvania pre-cruise tour explores Romania’s Transylvania region; the historic home of Dracula’s Castle. It included two nights in Bucharest and one night in the city of Brasov, plus a dedicated Viking concierge. I’ve met half a dozen couples that have done this extension, and everyone seems very happy with it. Viking offers it for $699 per person, according to its printed 2016 River Cruise brochure. 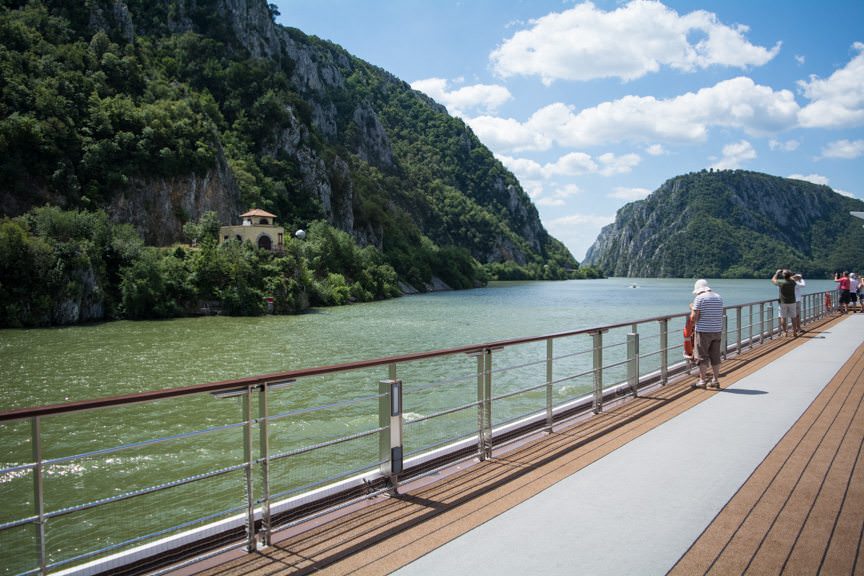 We may be exiting the Iron Gates…Photo © 2016 Aaron Saunders 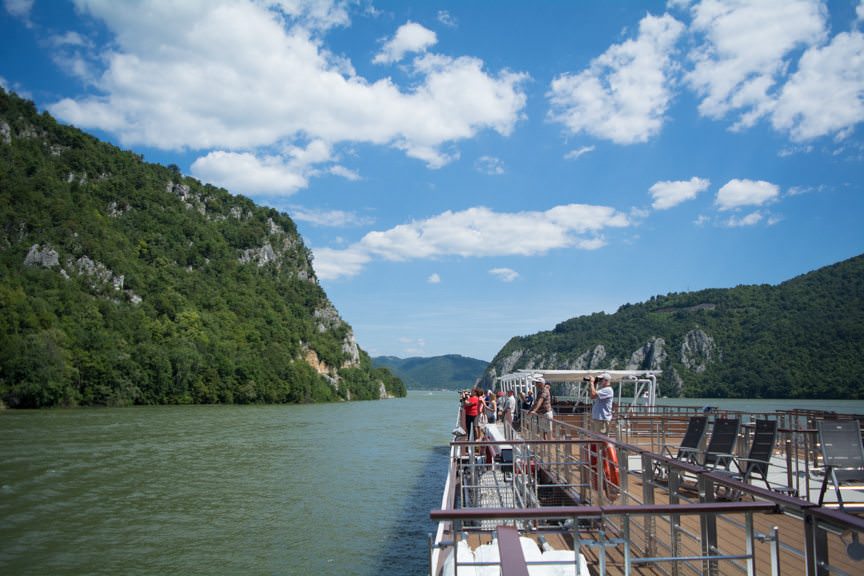 …but the scenic cruising continues on. Photo © 2016 Aaron Saunders

Tonight, the Danube is slowly but surely morphing into the Danube I remember from my Budapest to Nuremberg sailings. The landscape is mountainous again. Cars zip by on the roads that hug the banks of the river, and the giant propellers of wind farms turn lazily in the breeze. We’re now passing pleasure boats, cargo ships and other river cruise ships again. In many ways, the Iron Gates mark the Danube’s passage from flat, relatively obscure land into civilisation.

Tomorrow, we arrive in Belgrade, Serbia for a full day of explorations in yet another historically important city. It’s exciting to know we’re headed for another day of adventures – but equally reassuring that we get to return to the Viking Embla at the end of the day. The food is great, the staff are superb, and the ship is striking. What more could you ask for? 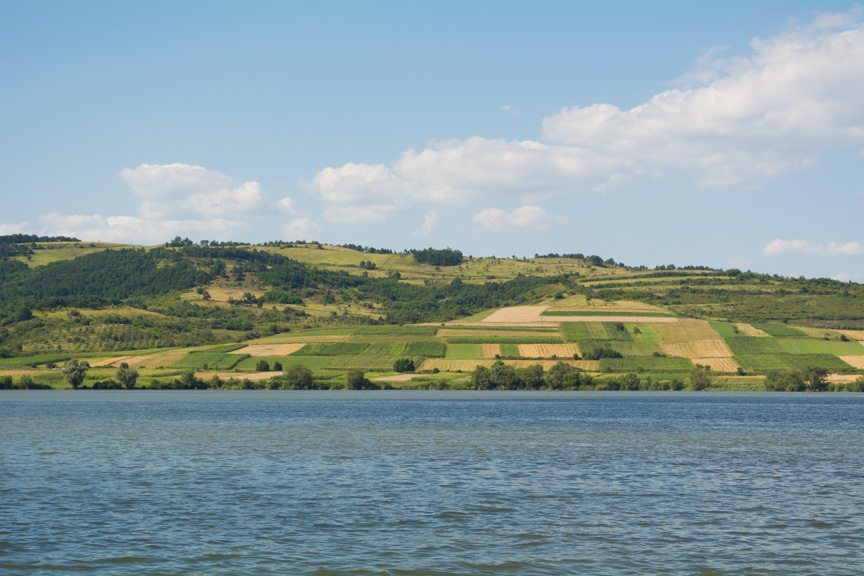 Another idyllic day on the Danube with Viking River Cruises comes to a close. Photo © 2016 Aaron Saunders

Our Voyage Report from onboard Viking River Cruises’ Viking Embla in Eastern Europe will begin tomorrow from Belgrade, Serbia! Be sure to follow along on twitter @deckchairblog or using the hashtag #LiveVoyageReport.