The Beauty of the Viking Longships 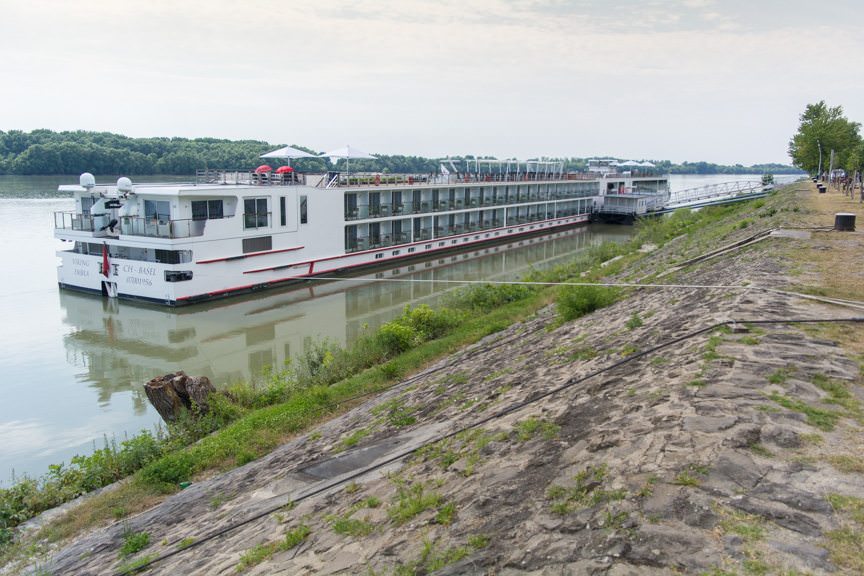 Four motorcoaches pulled up on a dusty road outside of the ship this afternoon. I looked at them, then at the Hungarian family taking a picnic in the shade under the trees. It looked hot. I stepped outside the ship. It was hot. I looked back at the air conditioned splendour of my ship. And I decided to stay. 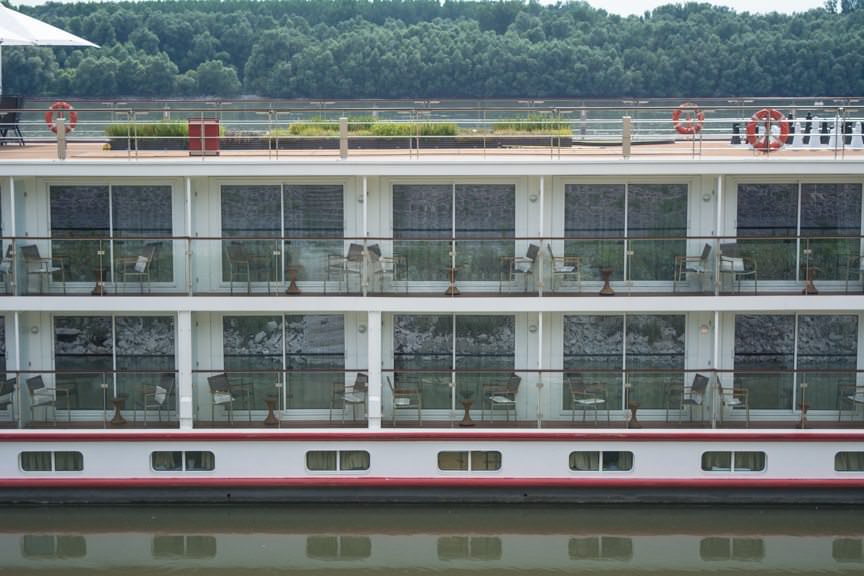 Yes, I’m electing to skip our last port of call – Kalocsa, Hungary – in favor of relaxing aboard Viking River Cruises’ Viking Embla. With the mercury rising again to 37°C by this afternoon, and the humidity piling up on top of that, I decided to stay onboard.

There were other reasons for my decision: today is our last day aboard Viking Embla. It’s my last chance to fully enjoy this beautiful ship, which is half of the reason I come here in the first place – to experience the joy of river cruising. 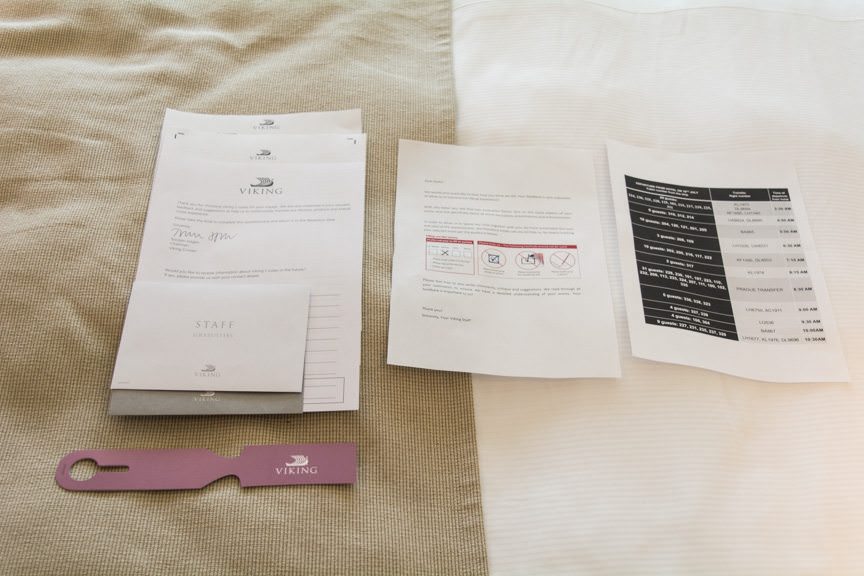 Although our cruise tour isn’t over, our river cruise is coming to an end: disembarkation forms were handed out this morning, along with the guest questionnaire. Photo © 2016 Aaron Saunders 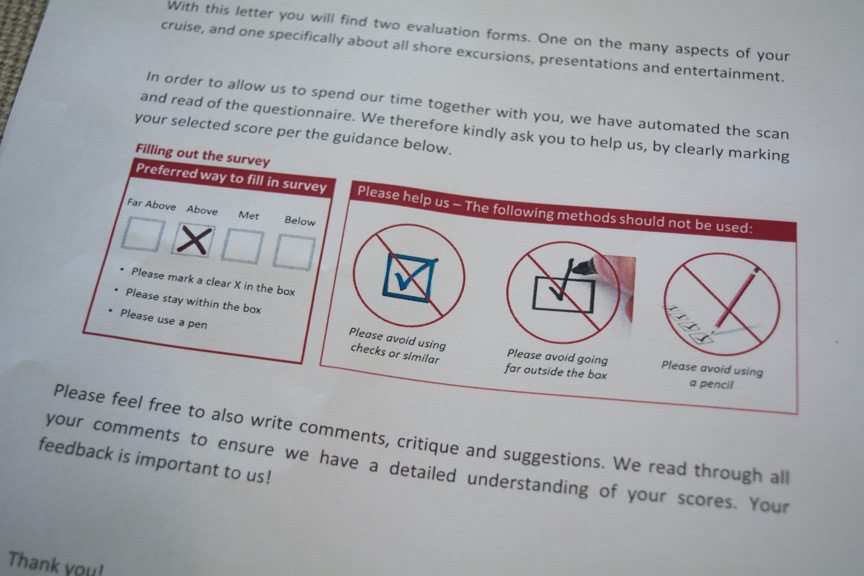 Watch out when you fill out your survey; it’s surprisingly strict in terms of how you mark it. Photo © 2016 Aaron Saunders

There’s another reason: though this is my last day aboard Viking Embla, it’s not the last day of our Passage to Eastern Europe adventure. On this itinerary, Viking includes a one-night pre-cruise stay in Bucharest, Romania and a two-night post-cruise stay in Budapest, Hungary at the Budapest Hilton.

Tomorrow, Viking is giving us a complimentary six-hour city tour of Budapest, transferring us from the ship to the hotel in the process. Our luggage will be waiting for us in our hotel rooms, and Viking has already provided us with a full list of optional excursions available for Friday, along with our flight times, transfer times, and relevant information for our departures back to North America on Saturday. 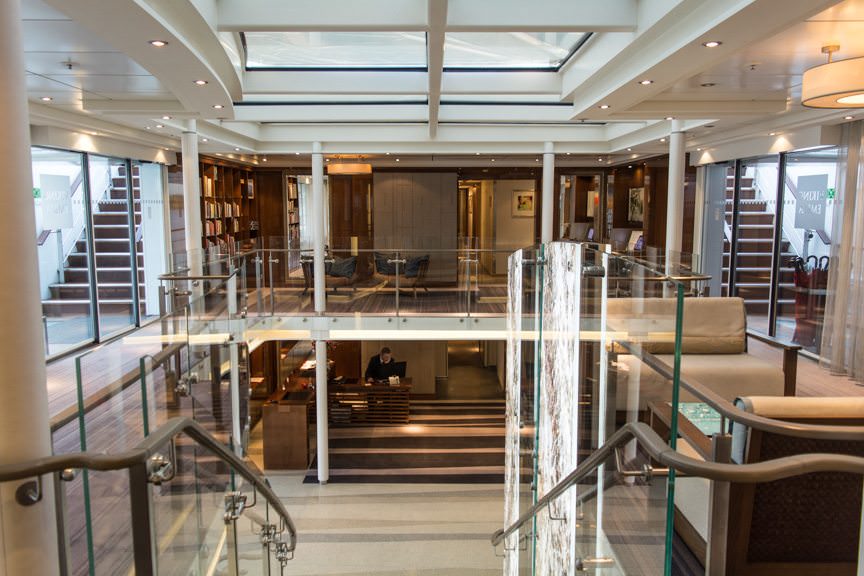 Instead of sweating it out today in Kalocsa, Hungary, I’d rather show you why I love these Viking Longships so much. Photo © 2016 Aaron Saunders

Today, though, began with customs formalities: at 6:30 a.m., we came alongside in Mohacs, Hungary for a face-to-face passport check. This is not because we’re entering Hungary, but moreso because we’re entering the Schengen Zone that a number of EU countries are members of. And with the issues facing refugees and migrants in the EU as of late, customs officials aren’t taking any chances. 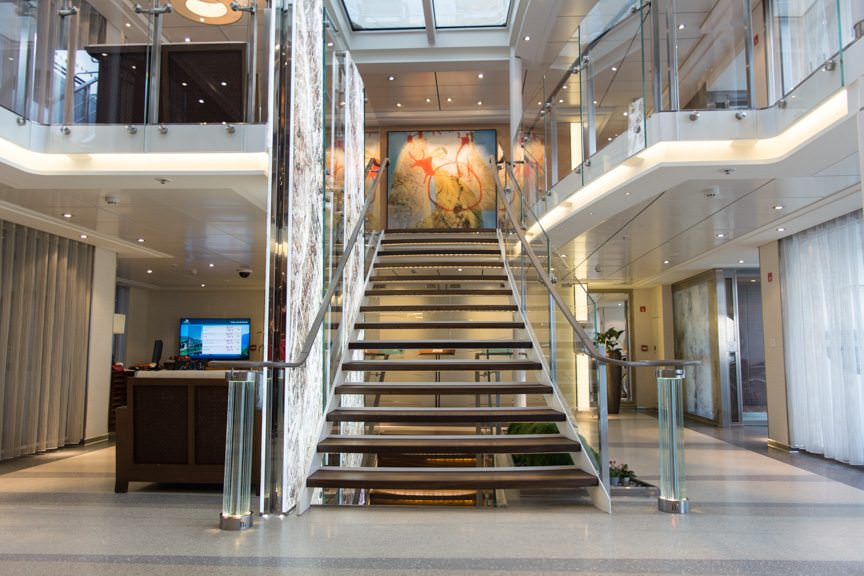 First, you’ve got the atrium, with its soaring two stories and walls of glass. Photo © 2016 Aaron Saunders 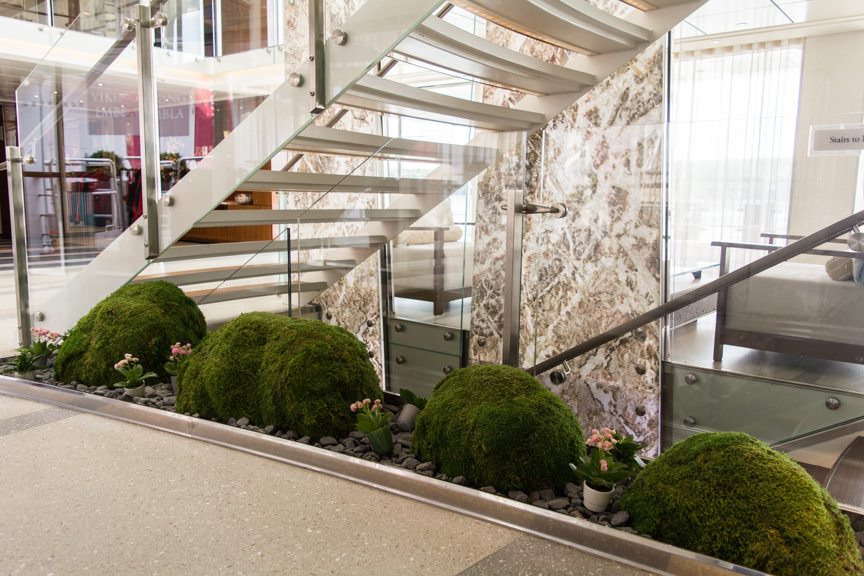 There’s also a neat living garden at the base of the staircase, on Deck 2. Photo © 2016 Aaron Saunders

Crew were called first, followed by guests in the 100 Corridor, 200 Corridor, and 300 Corridor. The entire process took maybe an hour, and we were underway again by 7:30 a.m. Being up at 6:00 anyway, I wasn’t inconvenienced at all, and we were warned it would be early at last night’s briefing. Still, it’s a pain, but an unavoidable one that is imposed on Viking and every other river cruise line. 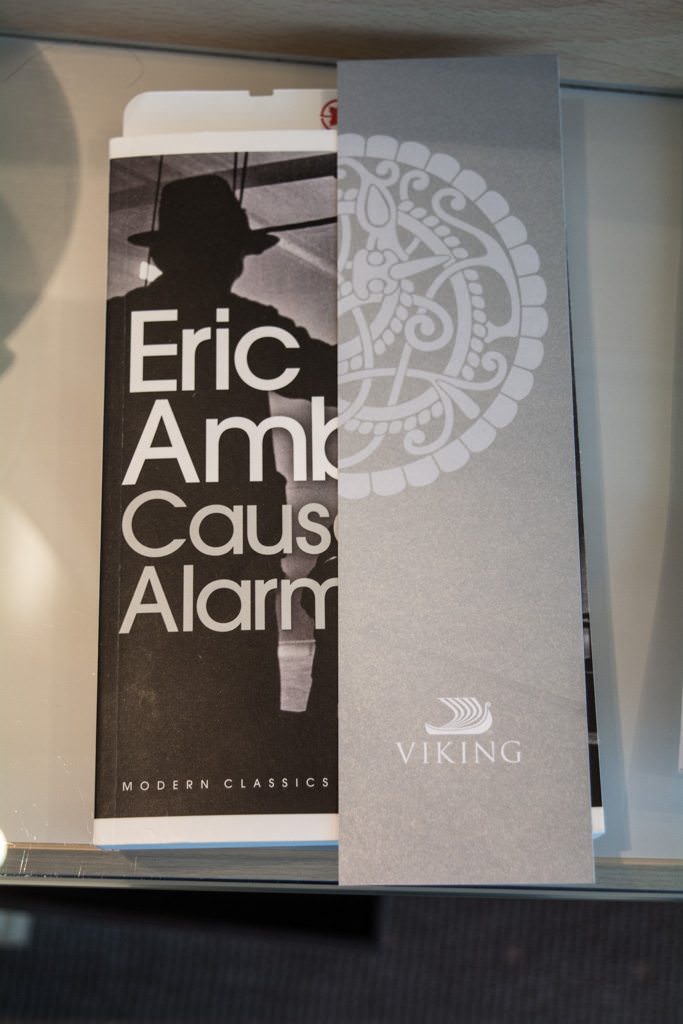 Viking is known for other little niceties, too. Put a book out in your stateroom – you just might get a nifty little bookmark inserted into it. Photo © 2016 Aaron Saunders

That’s one of the primary differences with this Eastern Danube voyage compared with its Western counterpart: lots of passport and immigration checks. This is our first face-to-face check, but our passports have been stamped in and out of each country we’ve visited over the past week. If you’re short on available passport pages, you might want to get yours renewed before making the journey; I reckon I’ll have close to 10 new stamps by the time I leave the EU on Saturday.

Of course, this relaxing day onboard Viking Embla is also a great time to answer some reader questions that have filtered in over the past week:

Which direction is better – Romania to Hungary, or reverse?

I’m glad I did this journey from Romania to Hungary. While Romania is positively modernized compared to worse-off Bulgaria, the progression of ports of call has meant that things have gotten more dramatic and developed as the week has gone on. I think this is particularly true for our guests that are staying on until Amsterdam; I think it might be a let-down to sail the reverse itinerary (ending in Bucharest) if people haven’t aligned their expectations properly.

Can you use Euros in these ports? What about U.S. Dollars?

It depends. Euros are sometimes accepted by shops, but most usually by street vendors selling their wares. U.S. Dollars are pretty much not accepted at all, unless you get a very willing street vendor to go along with the idea.

I have to admit this isn’t a huge shopping itinerary; when I sail the western stretches of the Danube, I end up coming back with clothing, new shoes, and the odd souvenir as I wind my way through Germany and Austria. On this stretch of the Danube, I’ve bought nothing so far except the odd beverage ashore or a local newspaper.

If you feel compelled to buy something, I’d use a credit card or pull out a small amount of local currency. Using money changing services can be a real pain, plus you’re going to lose a lot in the conversion.

What about water levels?

Water levels aren’t typically an issue on this stretch of the Danube; the real problems tend to occur just west of Budapest, and in the areas around the German cities of Passau and Regensburg. On my sailing, water levels have been very good, with no issues whatsoever. 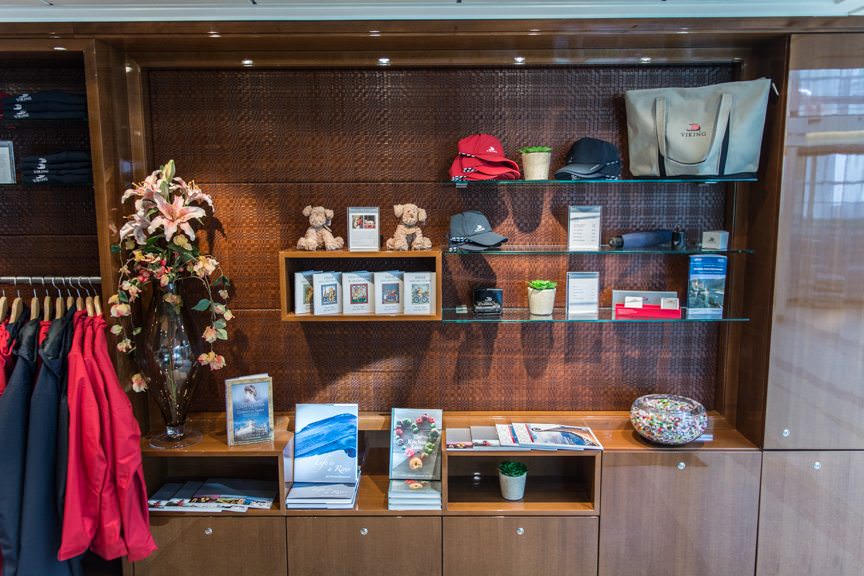 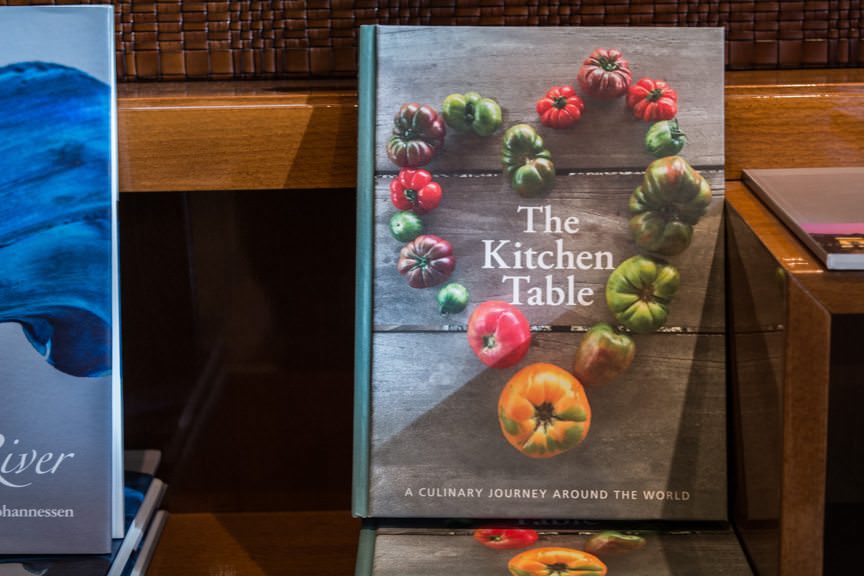 …including the best cookbook I personally own, filled with recipes from around the world as chosen by Viking’s Vice President, Karine Hagen. Photo © 2016 Aaron Saunders

The more I sail aboard Viking’s elegant Longships, the more convinced I remain that they’re some of the best river cruise ships afloat. With each successive sailing, I’m also convinced that Viking really gets it: the idea of what good service is, what great design is, and of what makes the ideal cruise vacation. 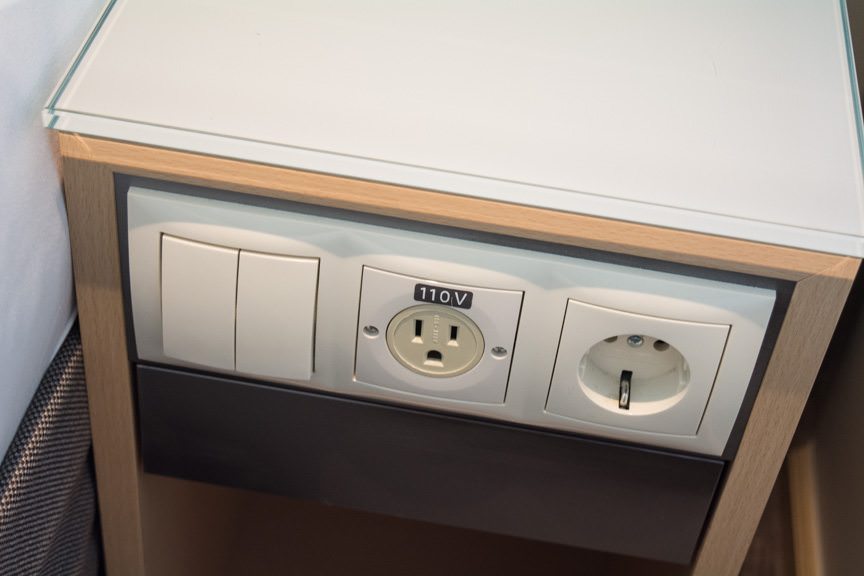 More handy touches: North American and European-style power outlets. I can’t tell you how many times Viking has changed or re-positioned these on newer vessels as a result of guest feedback. Photo © 2016 Aaron Saunders

Look at the average stateroom aboard Viking’s Longships: you’ve got multiple U.S. and European-style power outlets; something that many competing river cruise lines lack. You’ve got heated bathroom floors, with variable temperature-control. Again, most competing lines don’t even attempt to offer that. Mirrors are anti-fogging by default, closets light up when you open them, and the interactive television system pumps its audio through high-quality speakers hidden in the ceiling. 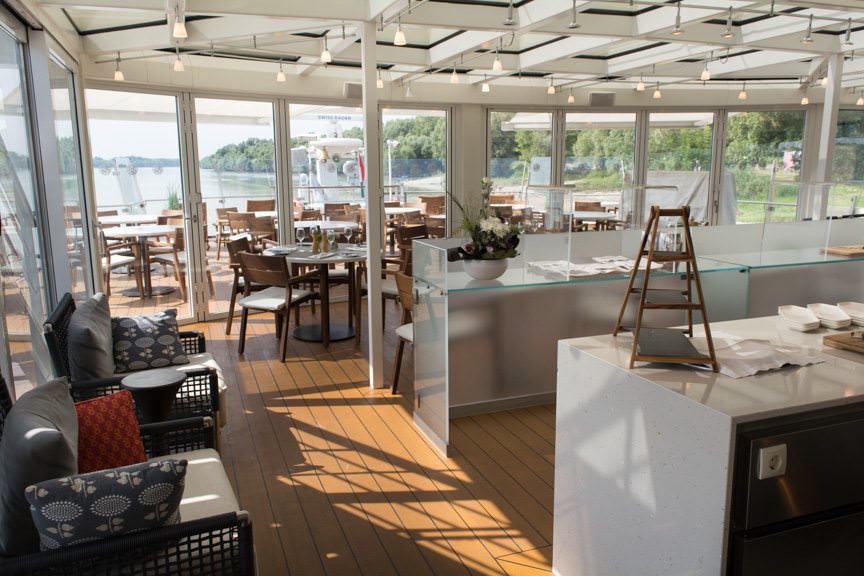 The groundbreaking Aquavit Terrace was a first for the river cruise industry. It is now often-copied but never imitated. Photo © 2016 Aaron Saunders

The Viking Longships help offset their reliance on the ship’s diesel engines and generators (which are whisper quiet, by the way) thanks to the installation of solar panels mounted to the top of the ship’s dual Explorer Suites. Herbs are grown onboard on the Sun Deck, and a Living Garden graces the foot of the atrium staircase. 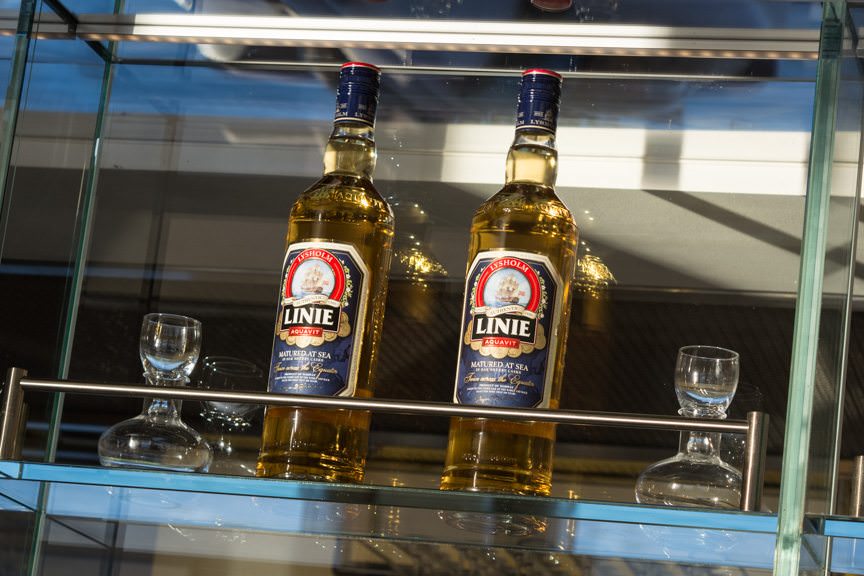 Viking also pays homage to its Norwegian heritage by stocking Linie Aquavit onboard. A distilled Norwegian spirit, it is said that the Linie Aquavit has to sail across the equator twice, and only then can it be shipped for sale and consumed. Photo © 2016 Aaron Saunders

Over the course of my sailings on numerous Viking Longships, I’ve seen Viking:

And that’s just the stateroom changes! 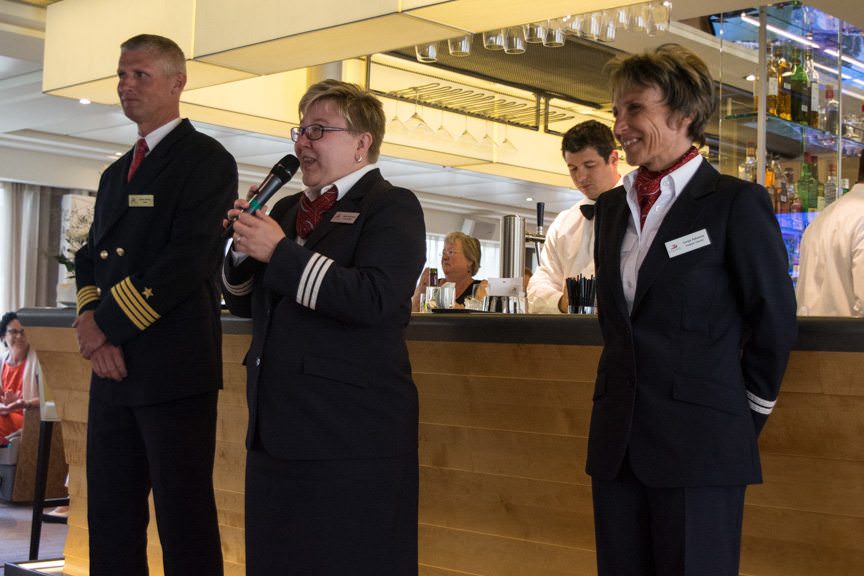 Tonight, it is time to say goodby to the Viking Embla. Captain Boris, Hotel Manager Katja and Program Manager Sonya bid us farewell with a toast. Photo © 2016 Aaron Saunders 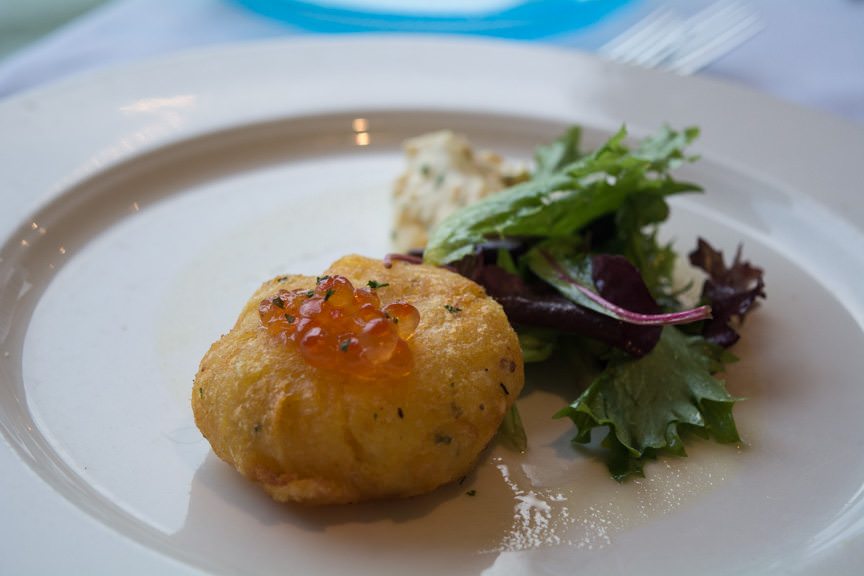 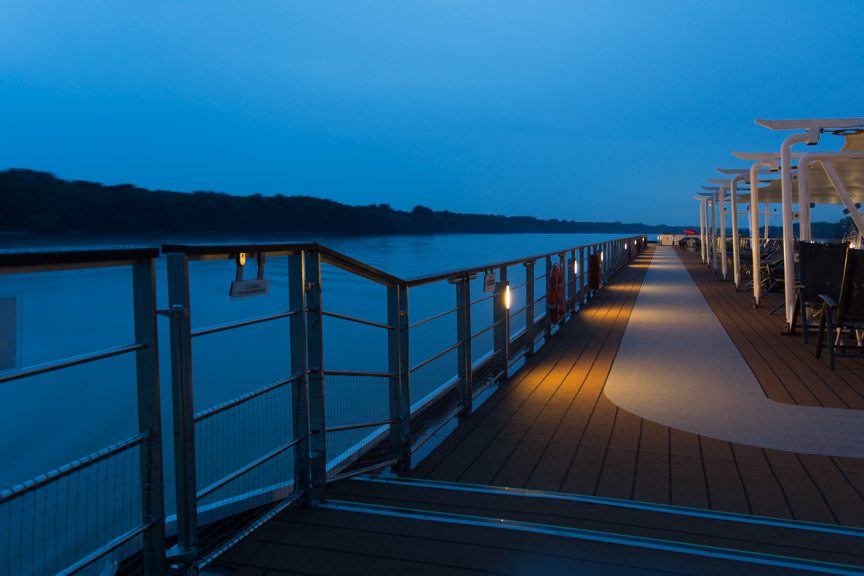 …while the skies opened up above us with rain, thunder and lightning. Photo © 2016 Aaron Saunders 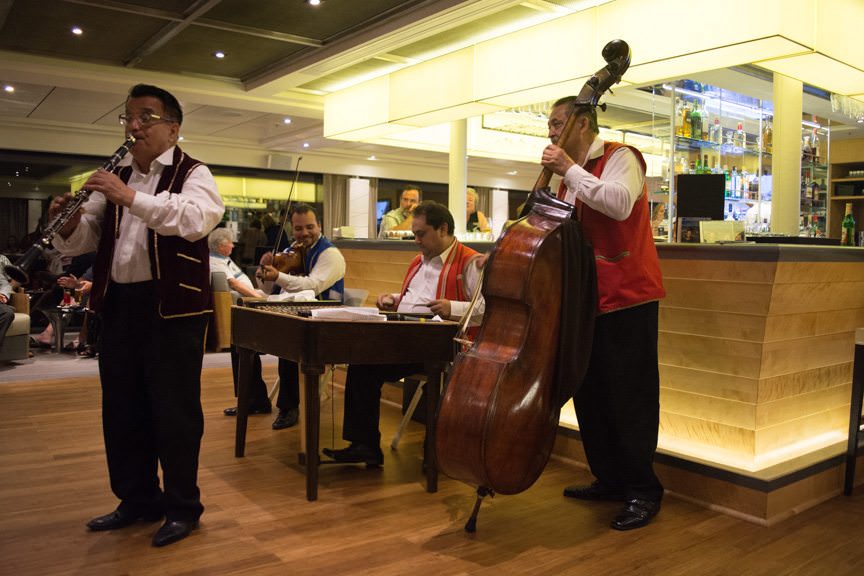 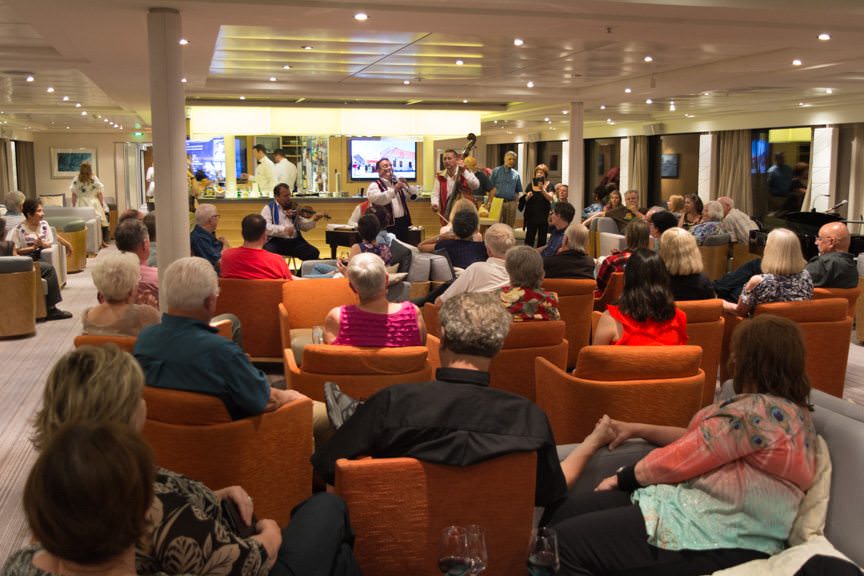 So why am I rattling off a laundry list of small, rather minute changes made between successive Viking Longships? Because the company truly cares what its guests think, and guest feedback has been responsible for all of the above changes.

Make no mistake about it: these changes cost Viking money. It would have been cheaper for the line to just keep the ships as they were. After all, the first four Viking Longships were truly spectacular. But that’s not the Viking way.

I see the same dedication in the way Viking continually tweaks its itineraries, menus, and on-shore programs. It’s encouraging, and exactly why I enjoy sailing with the line – no matter where we dock, or what I do during the day. 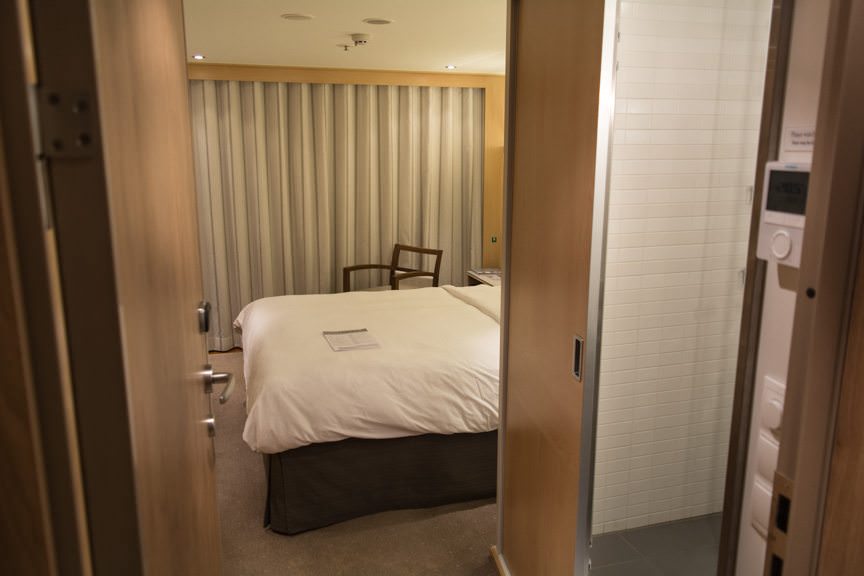 Our Voyage Report from onboard Viking River Cruises’ Viking Embla in Eastern Europe will continue tomorrow from Budapest, Hungary! Be sure to follow along on twitter @deckchairblog or using the hashtag #LiveVoyageReport.