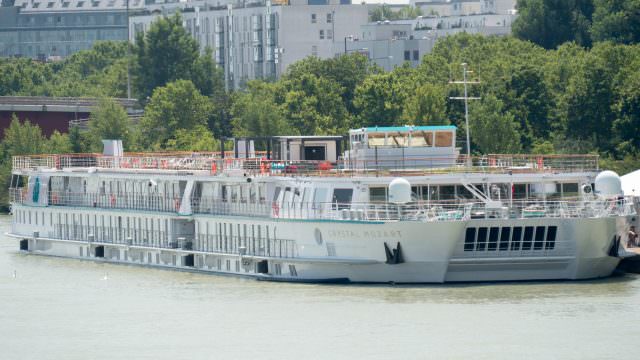 At 22.85 meters (75 feet) wide, Crystal Mozart is nearly twice the width of the standard river cruiser. Will the extra width make a difference to your river cruise experience? Yes. © 2016 Ralph Grizzle

After having taken “The Queen of Europe’s Rivers” down to her steel structure, Crystal River Cruises introduced a vessel in July of 2016 that is as beautiful as it is innovative — and it was all done in an extremely crunched timeframe.

It was late last year when Crystal announced the purchase of Dertour’s 1987-built MS Mozart, which was formerly operated by Peter Deilmann and TUI Cruises. At the time of her construction, Mozart was one of the largest river vessels afloat and easily recognizable thanks to her unique semi-catamaran design. She remains one of the widest river cruise vessels (nearly double the width of most river cruisers), and her increased dimensions mean that she can only sail the Danube between Passau and the Black Sea.

Transforming Mozart took more than 400 shipyard workers going at it around the clock. “We went through every single inch, both technically and from a hotel point of view,” says Crystal Cruises COO Thomas Mazloum. “We had 14 different contractors, two to three different designers, working the last couple of months in three shifts, 24 hours a day to get it finished in time.

“It was the most ambitious project we’ve ever undertaken,” Mazloum adds. “Our inspiration was, ‘What would the perfect Crystal boutique hotel look like if we were to open a hotel in Europe?’ That was what we asked our designers to create.”