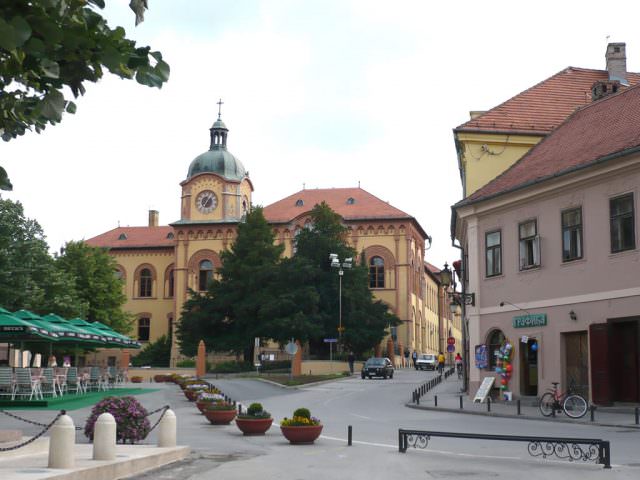 Town of Sremski Karlovi in Serbia. Photo courtesy of CroisiEurope

During this 10-day cruise, guests will discover the charming towns, cultural traditions and historical sites as they explore the cities of Belgrade and Zagreb, Lonjsko Polje & Kopacki Rit Nature Parks, the Orthodox monastery of Krusedol and Sremski Karlovci and more.

Guests also have the option of booking a 1-night extension to visit the Baroque town of Varazdin, Lake Balaton and a tour of Tihany before returning to Budapest. This new itinerary will depart on May 14, 2017 with prices starting at $2,826 per person, double, including the 1-night extension.*

Guests can choose one of two versions of this itinerary:

Guests will board in Budapest and begin by sailing across the border into Croatia and arriving in Osijek, Croatia’s fourth largest city. In the afternoon, head to Kopacki Rit Nature Park to explore the largest and most attractive wetland in Europe, located near the confluence of the Drava and the Danube Rivers.

In the morning, cruise to Vukovar, one of the prettiest towns in the Danube Valley. Spend the day exploring the city’s colorful streets lined with baroque-period inspired architecture before heading off to the medieval city of Ilok, which lies on top of a hill overlooking the Danube River. From here, travel the Danube River and the Serbian region of Vojvodina, the next stop on this cruise.

In Vojovdina, disembark for an excursion to Novi Sad, the capital of Vojovdina that is located on the banks of the Danube River between Budapest and Belgrade. Spend the night sailing towards Belgrade, before heading out in the morning for a guided tour of this historical city. Guests will explore the streets of a city that has developed its own cultural identity, portraying a mix of Austro-Hungarian, Ottoman, and Slavic cultural influences.

Cruising along the Sava River, guests will sail across the plains of Vojvodina, where picturesque Serbian art and culture line the riverside with a tasteful combination of Byzantine and baroque architecture. Spend the evening onboard while sailing to Sremska Mitrovica.

The next day, depart for an excursion across the Vojvodina to the area around the hamlet of Iriski Venac to discover traditional Serbian art while exploring the area’s 16 Orthodox monasteries with their blending of Byzantine and Baroque architectural styles. That evening, guests will enjoy an introduction to Bosnia’s culture while en route to Brcko, Bosnia with music, dancing, and the folk traditions.

The next day travelers have an shore excursion through Brcko strolling the city streets lined with buildings in the traditional Austro-Hungarian architectural style crossed with Ottoman influences. In the afternoon, the cruise will sail along the Sava River, which marks the border between Bosnia and Croatia, before arriving in Slavonski Brod for the evening.

In the morning, guests will head to Lonjsko Polje Nature Park for the day’s excursion. These wetlands are the largest protected wetlands in Croatia, an area favored by the migratory birds. After exploring the wetlands, visit an authentic Slavonian farm to sample regional produce. Guests will then board the ship and cruise towards Sisak en route to Zagreb. Upon arriving in Zagreb travelers have the day to stroll around this picture perfect city during a free day. Visit the gardens, saunter along the steep streets of Gradec and Kaptol, and discover Zagreb’s historic center. In the evening, guests will return on board for a farewell gala evening.

The next morning, guests can either disembark or continue on a 2-day, 1-night extension. This add-on begins with a transfer by coach to Varazdin, in the province of Zagorje, with a guided visit to this baroque gem. Then in the afternoon, sail towards Lake Balaton, a favorite destination among Hungarians, for a short visit. Spend the night at a local hotel and enjoy a free evening.

After breakfast at the hotel the next morning, go on a guided visit of Tihany followed by free time to explore this peninsula’s overflowing beauty from the enchanting setting and local shops to the rich history of the Benedictine Abbey. In the afternoon, guests will be transferred to Budapest, where they are free to enjoy lunch and all the sites the city has to offer. The extension will end upon arrival in Budapest.

For complete details on this itinerary and excursions, please visit: http://www.croisieuroperivercruises.com/cruises/journey-between-central-europe-and-balkans

* Starting prices are per person double sharing a twin cabin on the lower deck and include all drinks and meals served on board (excluding champagne and drinks from the wine list), shore excursions, free Wifi and a complimentary Samsung Galaxy Tablet in the lobby for guests to use during their trip. Pricing listed in this announcement includes 1-night extension. This can be removed for passengers not interested in staying on for the additional night. For single supplement fares or other pricing questions, please call CroisiEurope’s US Call Center at (800) 768-7232.

Established in 1976, CroisiEurope is celebrating its 40th anniversary as a leader in affordable European river cruising. Based in Strasbourg, France, CroisiEurope is headquartered at the epicenter of Europe with offices in Brussels, Paris, Lyon, Nice, Laussane, Madrid, London, Phnom Penh and New York. With an English-speaking crew of 700, this family owned company operates 43 vessels that sail along the most famous rivers in Europe, Asia and, coming in 2017, Africa. Passengers can choose from a variety of itineraries that explore picturesque riverside cities in France, Italy, Spain, Germany and Belgium while treating guests to on-board dining menus designed by French Master Chef Alain Bohn, a proud member of the exclusive Chaine de Rotisserie. Today, CroisiEurope offers cruises not only in Europe but also along the Mediterranean coast, Vietnam and Cambodia.