You are here: Home / Cruise Companies / AMAWATERWAYS / Low Price River Cruises: Is This The Year To River Cruise?

River cruising is experiencing an exceptional year – for river cruisers, that is. River cruise lines, on the other hand, are struggling to fill ships in the wake of concerns from North American travellers about travel abroad. For those looking for a great deal, however, there has never been a better time to take a European river cruise. 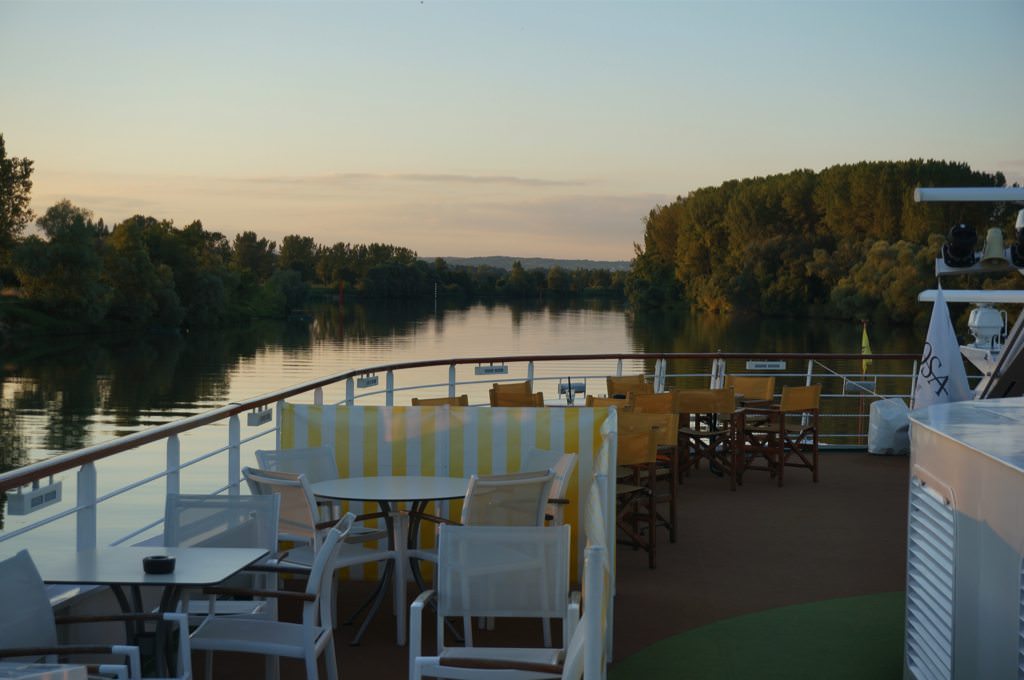 The time to take a river cruise is now. Photo © Ralph Grizzle

So why can’t river cruise lines fill ships? Sales were sluggish during the first and second quarters due to the terrorist attacks in Brussels and Paris, compounded by overcapacity (too many ships for two few passengers) in the region, and a host of other, smaller, factors.

Viking River Cruises responded with risk-free cancellations that fully refunded deposits in cash should guests choose to cancel their cruises. That initiative resulted in a record-booking day for Viking: $25 million companywide at the end of February. More recently, Viking launched value-priced sailings as low as $125 per person per day, with the eight-day Danube Waltz or Romantic Danube itineraries selling for as little as $999 per person.

This low pricing is not the new norm, however. Cruise companies are reporting a recovery, with bookings picking up pace over the last few months. There are fewer deals now than there were a few weeks ago (those $125 per person sailings are nearly sold out), but there is still a chance to get exceptional value on some sailings. Current incentives range from included air to two-for-ones to other special offers that are spurring bookings.

If you’re considering a river cruise in 2016, it’s best to book quickly for the greatest deals. Inventory, once abundant, is disappearing, and soon there will not be a lot left to choose from, particularly if you’re set on a sail date and stateroom category.

In the meantime, the pace for 2017 bookings is also picking up. In talking with river cruise companies, we don’t expect to see the same extraordinary values next year as was the case this year, with demand for 2017 sailings roughly on-par with  the 2014-2015 river cruise seasons.

While it’s best to talk with travel agents and river cruise seller specialists about specific prices and incentives, you’ll find resources here on River Cruise Advisor to help you frame where you want to cruise and which cruise line you want to cruise with.

Here’s some help in a condensed format:

AmaWaterways‘ philosophy is to under-promise and over-deliver. For example, AmaWaterways may be the best performer in low water situations: Is AmaWaterways The Champion Of Low Water? Cruising Historic Low Rhine River Levels. Having your trip impacted by low water can be disappointing so AmaWaterways even has a Low Water Guarantee should your trip be affected by low water. On the amenities side of things, the company also has invested heavily in its internet infrastructure on its ships: The Future Of The Internet On River Cruises: Here Already On AmaWaterways.

What is it like aboard an AmaWaterways ship? Read our Taste of Bordeaux aboard AmaDolce feature, or our AmaLotus on the Mekong Voyage Report for a look at one of the line’s most diverse itineraries. 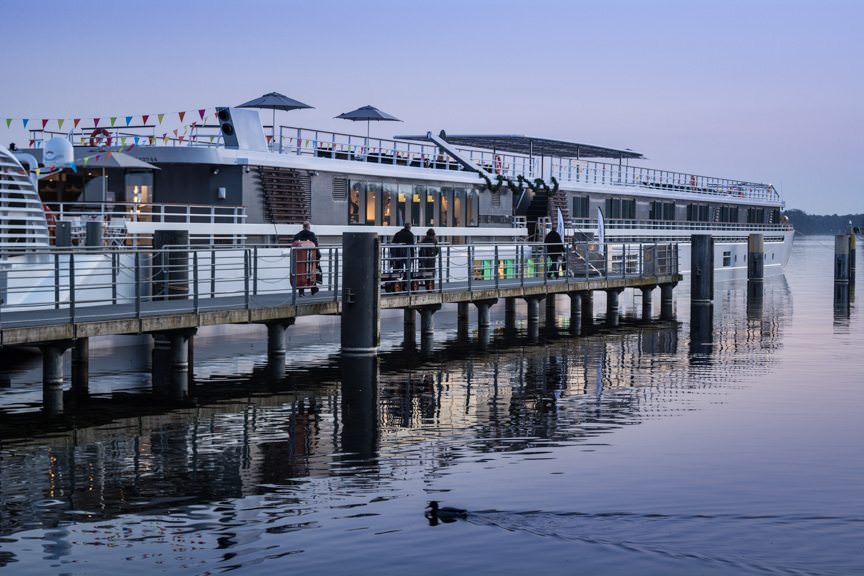 CroisiEurope is French, family owned and operated, and the company has a lot of ships. Vessels range from coastal cruisers to river cruisers to luxury hotel barges, to innovative paddlewheel-driven ships that can simply go where the competition cannot.

If there’s one thing CroisiEurope excels at, it is delivering an authentic European river cruise experience on the waterways of the continent. This is the cruise to take for the full-immersion experience. The company does a wonderful job of catering to English, French and German-speaking guests, so you can expect to hear plenty of languages spoken onboard. Cuisine is regionally-inspired, beers are local, and wines are – naturally – French. It’s not American, and that’s okay:  Staff speak English and deliver programming (both written and verbal) in a variety of languages.

To get a taste of CroisiEurope, check out my reviews on the Seine: Video Review: What’s It Like Cruising CroisiEurope’s ms Botticelli? on the Anne-Marie Barge in the South of France: Barging In The South Of France: CroisiEurope’s Anne-Marie, Day 10, Our Trip Comes To An End, Wrapping Up and my look at the revolutionary Loire Princesse. 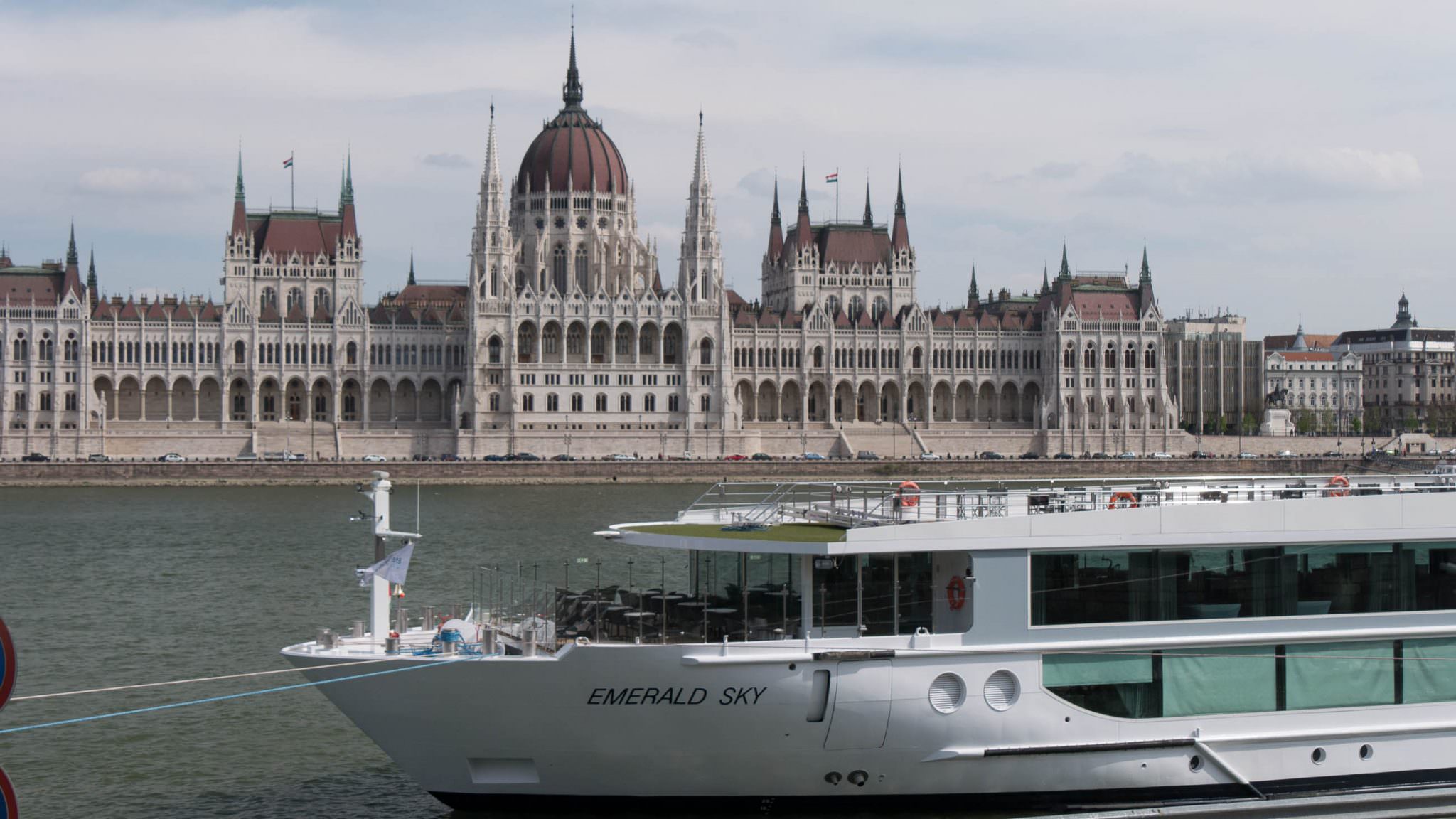 Emerald Sky docked across from the Parliment building in Budapest. © 2016 Ralph Grizzle

That doesn’t meant that Emerald Waterways is cheaping out on amenities, though. Onboard each of the line’s ships, you’ll find an aft-facing swimming pool that doubles as a cinema during the evening hours, not to mention a chic lounge and restaurant.

Emerald also aspires to include more than other lines: beer, wine and soft drinks are free with lunch and dinner, and the line throws in gratuities and airport transfers to boot. Complimentary touring bicycles are available for guests to use throughout the voyage too.

I sailed on Emerald Sky in April of 2016. Check out what I appreciated about the ship and the Emerald Waterways product at these links: An Incredible Journey: Enchantment Of Eastern Europe On Emerald Sky and My Take On Emerald Sky: Five Favorite Things 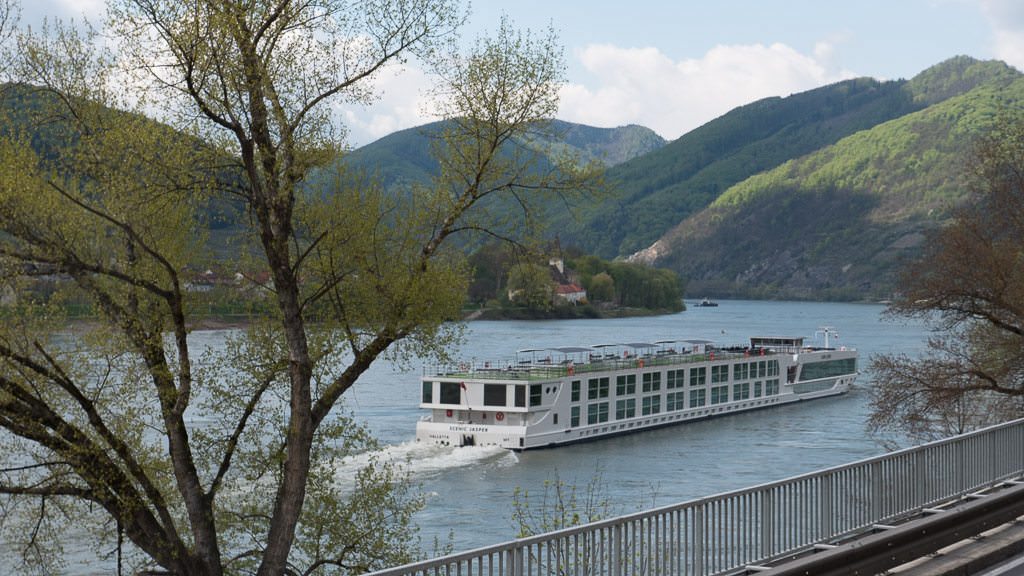 Australia-based Scenic strives to be the most inclusive of all river cruise companies -and it does an admirable job in that respect. So naturally gratuities and all beverages are included around-the-clock, but also laundry service and nearly everything else you can think of.

Scenic also makes better use of technology than its competitors in terms of enhancing your cruise experience, and it does so through a variety of unique devices. Scenic Tailormade is the line’s advanced (and complimentary) GPS-enabled self-guided touring system that works both onboard the ship during scenic cruising, and ashore in most major ports of call. This allows you to conduct your own private tour without having to be herded around with a standard tour group.

Scenic also uses Apple Mac Mini computers to run its onboard entertainment system (which is tremendous), and even features power-assist bicycles for rent. How much does it cost to rent a bikel? Not a dime; they’re yours to enjoy free of charge throughout the voyage.

Scenic’s “Space Ships” are beautiful with gorgeous staterooms and bright, inviting public rooms. There are also multiple dining venues featured aboard each ship; a huge plus if you’re adverse to group dining. I wrote extensively about Scenic in this post: Scenic Jasper, End Of Cruise, Summing Up 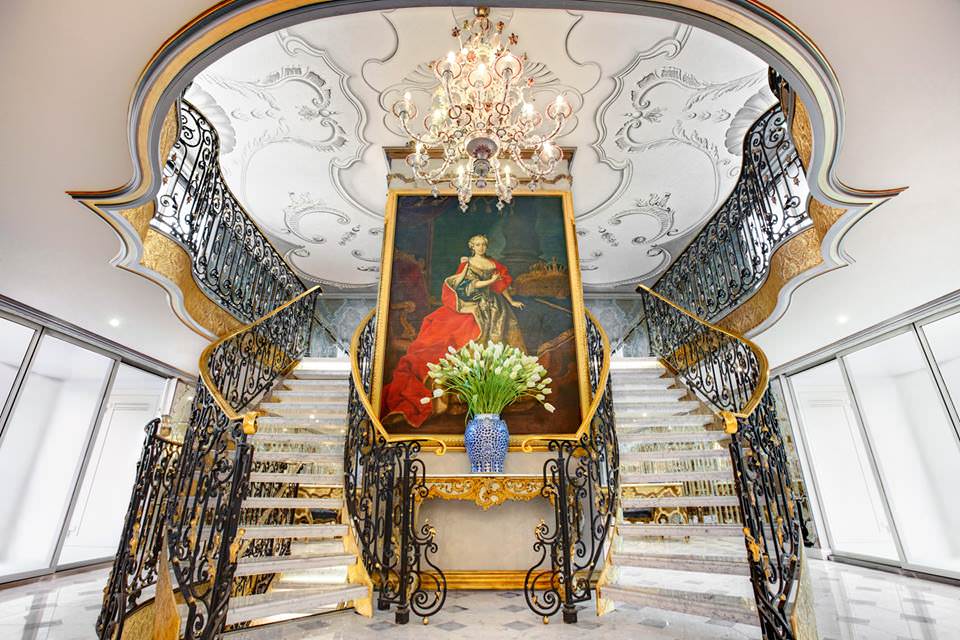 Uniworld Boutique River Cruise Collection is also all-inclusive, meaning that all beverages (alcoholic or otherwise), tours, gratuities and even laundry for some stateroom categories is included in the cost of the cruise.  Uniworld’s ships are known for styling that could best be described as Versailles meets Ritz Carlton. The line’s latest vessel,  the S.S. Maria Theresa, for example, is baroque inspired. Cruising down the Danube, you can imagine yourself living during the time of the beloved Empress Sisi.

So, what is it like to sail with Uniworld? Check our our Voyage Report from onboard the S.S. Maria Theresa.

How does Uniworld compare to Scenic? Have a look at the following posts: How Do They Compare? Scenic Jasper and Uniworld’s Maria Theresa and this one Compared: Scenic’s Sun Lounges & Uniworld’s Open-Air Balconies 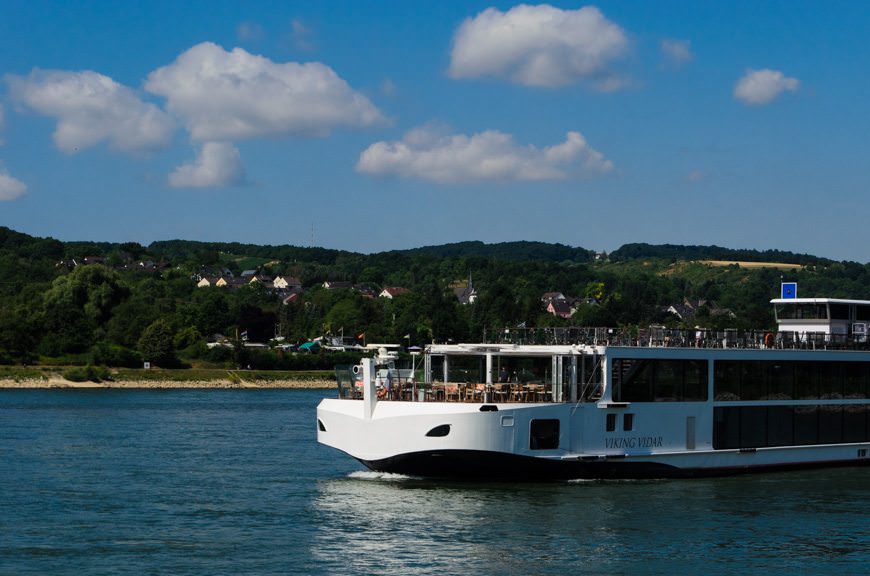 Viking River Cruises strives to provide “affordable luxury.” Typically, you will get a great value on Viking. To give you just one example of what Viking means by “affordable luxury,” the bathroom floors in your stateroom are heated. Showers are spacious. Bathrooms feature L’Occitane toiletries.

With its crisp, Scandinavian-inspired decor, Viking re-wrote the book on river cruising back in 2012 with the launch of its first Viking Longships. These revolutionized river cruises, with their two-story, glass-walled atriums, their true full suites, onboard herb gardens, solar panels, and the iconic Aquavit Terrace for dining al fresco on the bow of the ships.

Viking also launched a massive advertising blitz that has succeeded in bringing increased awareness not just to the line, but to river cruising in general.

What can you expect from Viking? We’ve covered a number of itineraries extensively:

Of course, with new ships coming online each year, Viking continues to expand and further develop its product to please repeat and first-time guests alike.

With the outlook for river cruises showing increased demand, the pressure is on to take advantage of some of these last-minute deals that, at this point, look to be unique to 2016.