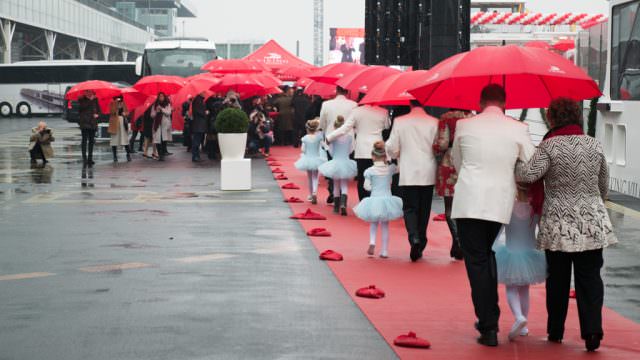 Last Tuesday in Amsterdam, I stood in a cold, light rain to witness the christening of six new Viking Longships. Though the Viking christenings, which I have been attending for the past three years, have always been exciting, my talks with Viking executives before and after the events were even more exciting.

I learned a lot about Viking River Cruises that I am eager to share with readers of River Cruise Advisor. 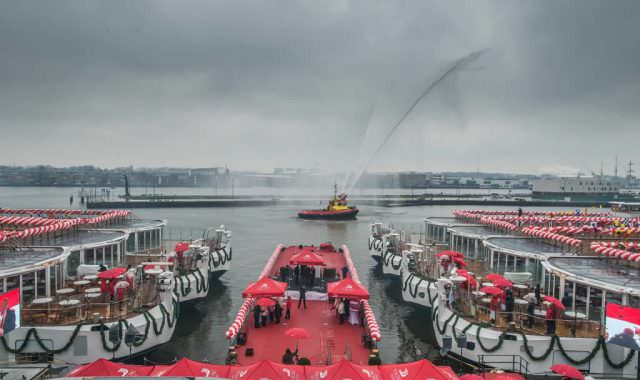 Three major themes evolved during our talks: 1) how Viking deals with low water situations in Europe; 2) how the company’s ongoing incentives continue to spur business following a lull in bookings after the November Paris attacks; and 3) how Viking is positioning itself as offering “Affordable Luxury.”

Last year, some of the rivers in Europe saw record low water levels. With insufficient water beneath their hulls, ships had trouble operating.

The Elbe River proved to be one of the most challenging rivers. Although the ships that Viking operates on the Elbe have shallow drafts, they were not shallow enough to cruise the river. On the Elbe, Viking ships have drafts that are normally around 80 centimeters (less than three feet). “But when the water level gets down to 60 centimeters, that doesn’t help us a lot,” said Viking River Cruises Chairman Torstein Hagen. 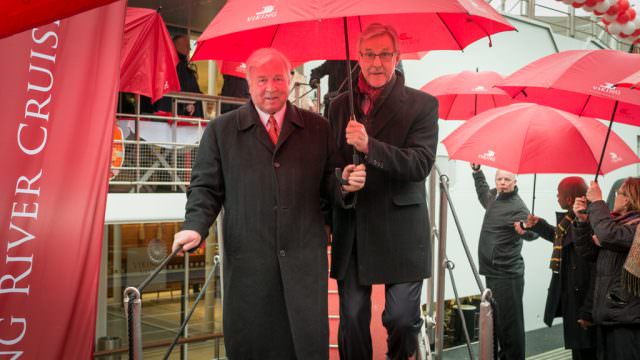 Hagen said the water levels were “unusual,” which gives us hope that water levels may be back to normal this year. In fact, to find out myself, I’ll be on an Elbe River cruise, with Viking, at some point during this year’s cruise season.

Other rivers also saw historic lows, but they were less effected. On Amsterdam to Budapest itineraries, Viking has learned to deal with low water “quite well,” Hagen told us. “When a ship leaves Amsterdam, a sister ship leaves Budapest. Then they meet almost in the middle … there is a hump there so to speak, a five- or six-kilometer hump where one can’t navigate in bad times.”

With both ships relatively near to one another, there’s a ship swap. The operation is nearly seamless, with crew handling the luggage transfers and busses transporting guests not quite four hours to reach the sister ship. As all of Viking Longships are nearly identical, guests even get the same cabins when they swap ships. “I think that we handle that very well,” Hagen said. “We have been in this business so long that we know the benefit of having sisters ships. We know the benefit of starting one in Amsterdam when the other starts in Budapest. We have a lot more flexibility than our competitors.”

The area where it is “a little bit more complicated is between Nuremberg and Budapest,” he added.

The “hump” is only 1.5 days into the seven-day cruise, so it’s more challenging to schedule itineraries where the ships can meet. The result is that shallow water necessitates more bussing than on the Amsterdam to Budapest run.

I wouldn’t want to discourage anyone from cruising the Danube (in fact, it’s our number one recommendation for those new to river cruising), but after learning about how Viking deals with low water, I would be more inclined to do the longer run, from Amsterdam to Budapest.

November’s tragic events in Paris had a huge, negative impact on bookings. Viking’s normally robust bookings had been down as much as “58 percent in the first few weeks” following the attacks, Hagen told us in a press conference on Viking Vili.

Travel to Europe has experienced similar lulls in past years. Viking started business in 1997, “so we remember 2001 … we remember 2008, we remember a lot of years [when business was negatively impacted],” Hagen said. “Typically what we have done is that in difficult times we have tried to make a great leap forward, as the Chinese would say.”

To make that leap forward and stimulate demand, in January Viking introduced a “cancel for any reason” program designed to reassure travelers that they could book a Viking river cruise with the confidence that they could cancel up until the time of departure and receive a full refund. Through February 29, the refund came in the form of cash back. Through March 31, the refund comes in the form of future cruise vouchers that can be used before December 31, 2017.

Viking also introduced a single supplement of only 125 percent of the per person rate for double occupancy in a stateroom. “I don’t think you will see that last forever,” Hagen said, “but it’s at least an incentive now for people to book.”

The result of Viking’s initiatives: Record revenues on February 29, which was the last day to get cash back through the “cancel for any reason” program. In a single day, the company chalked up $25 million in new bookings.

Our hope is that all of that new business sticks. And if there is relative peace in Europe, there is no reason that the bookings should not stick.

The record bookings show that “we are back on track,” Hagen said.

I’ve always appreciated the design aesthetic of the Viking Longships. It incorporates a Scandinavian ethos that is at once appealing and soothing. As someone who has deliberately chosen to live on a part-time basis in Sweden for the past decade, the Scandinavian components on Viking’s Longships make me feel right at home.

I’m going to digress for a moment to make a point about the authenticity of interior Scandinavian design incorporated into Viking’s Longships, and in its ocean ships as well.

There’s a good chance that you’ve never heard of Klippan. I hadn’t either until 2007. Klippan is a small Swedish town where my significant other grew up. Her parents still live there, and we typically spend the Christmas holidays — and other holidays — in Klippan.

The town has a well known textile factory, Klippan Yllefabrik. Late last year, Monica suggested that we visit the factory to buy blankets for a house I am renovating in Asheville, North Carolina. In designing the house, I am bringing a small piece of Sweden to Appalachia.

Much to my surprise, I learned that Viking also uses Klippan fabrics on its Longships and ocean-going ships. Mention the blankets to those who have been on Viking Star and you’ll hear how much they love wrapping up in the fine fabrics from the little town in Sweden. 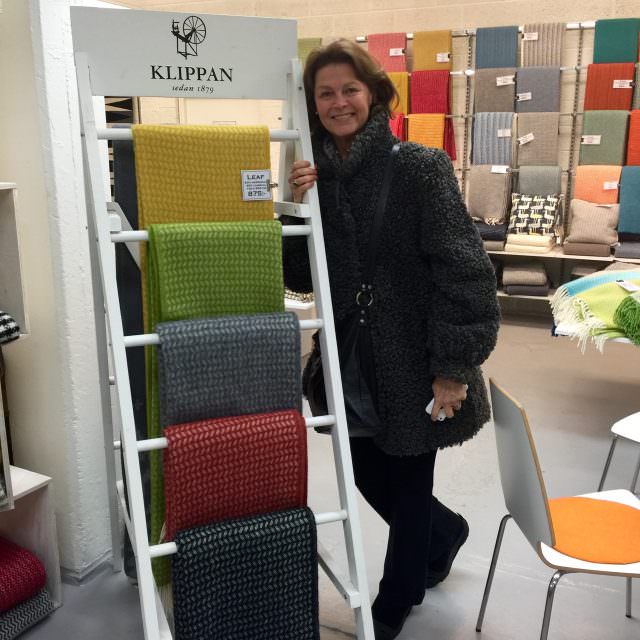 Monica was proud to learn that Viking uses fabrics from Klippan, a small town in Sweden. © 2016 Ralph Grizzle

I bought three blankets for my Asheville house during the first week in January. When I returned to Asheville a week later, I had one more blanket waiting for me. Viking had sent out Christmas presents to journalists, and what a surprise, a blanket from Klippan. 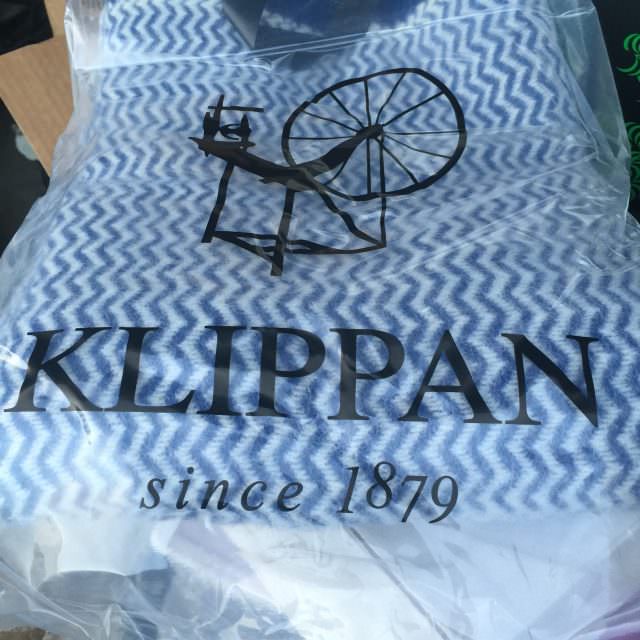 A surprise Christmas present from Viking: a blanket from Klippan. © 2016 Ralph Grizzle

My point in telling you this is to illustrate how Viking incorporates the best of Scandinavian design in its ships, both on the rivers and on the oceans. It wasn’t only the blankets that confirmed this for me. I had the pleasure of dining with Richard Riviere, the Los Angeles designer who has been responsible for Viking’s interior design (along with his predecessor, the Norwegian designer Bjørn Storbratten). Riviere says that he travels throughout Scandinavia seeking out the best of Nordic design. Yes, there is a budget, but it seems to be skewed toward getting the best quality available. 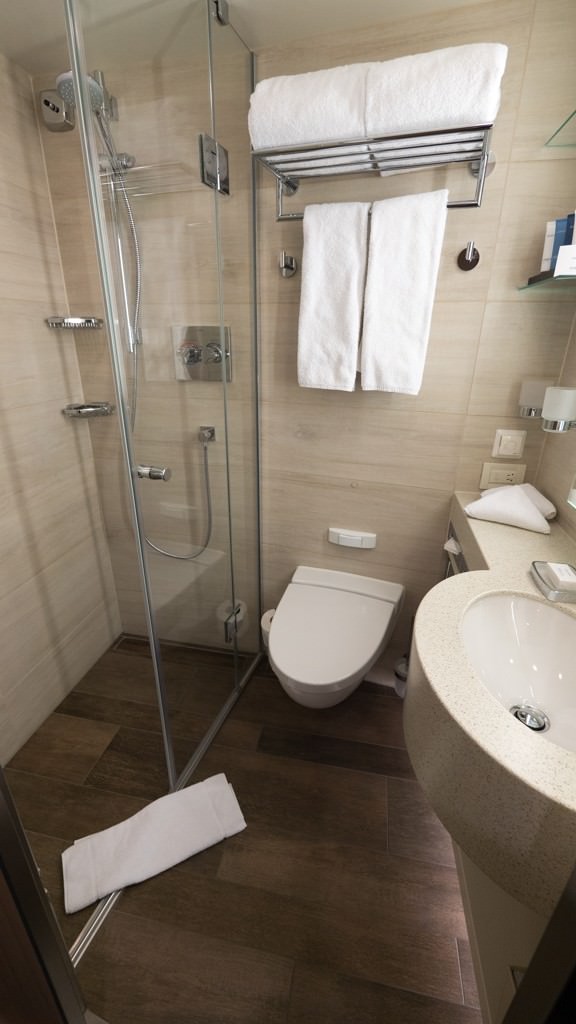 Another small, but luxurious and Nordic touch, is the heated bathroom floor in each stateroom on Viking’s Longships. “We try to make this a home for our guests when they are here,” Hagen said. “We have shied away from using the word luxury. I know personally … that we are as good a product at least as our competitors. Our ships cost probably $4 million more than our competitors. We spend a lot of money on the little details.”

Richard Marnell, senior vice president of marketing for Viking Cruises, says that Viking is rethinking how it positions itself. “As we look to the market and what the market is offering and how our peer set is positioning themselves, we consider ourselves affordable luxury,” he told me in a private interview in the sprawling Explorer Suite. “When we interview our past guests and try to get their impressions of what their experience has been, they keep coming back to the value that we provide. We like to think that, much like the Scandinavian design ethos that we have, is that you get exactly what you need and a little bit more.”

That final thought resonates in the meaning of the Swedish word Lagom, which translates to “adequate” or “sufficient” or “neither too much, nor too little.” It is, in part, the essence of what it means to be Scandinavian.

Sure, I get it. I am now seeing Viking through a slightly different prism than I had seen it before. When you factor in Viking’s values, particularly the seasonal and solo incentives, along with its Nordic design and “Affordable Luxury,” 2016 may just be the best of times to experience a Viking river cruise in Europe.